The present case involved a 27-year-old woman, who presented to a nearby physician with chief complaints of fever and dyspnea and hospitalized with a diagnosis of right lobar pneumonia on the same day. The patient was treated with antibiotics (aminobenzylpenicillin/sulbactam); however, exacerbation of respiratory status occurred with hypotension, and she was transferred to the authors’ hospital under tracheal intubation. The right superior lobe exhibited a wide range of infiltrative shadows with air bronchograms. Vasopressor and continuous hemodiafiltration were initiated to address overall exacerbation, and antibiotics (ciprofloxacin) were added. However, ventilation could not be maintained due to the large quantity of respiratory secretions; consequently, extracorporeal membrane oxygenation (ECMO) was initiated 5 h after admission to the intensive care unit. Due to the large quantity of Gram-negative bacilli confirmed by gram stain of respiratory secretions, amikacin was added. Although oxygenation was improved after initial ECMO induction, the patient died on day 2 of admission, despite being revived from sudden cardiac arrest. Pseudomonas aeruginosa was detected in respiratory secretions, blood cultures, and all lung tissues at autopsy, and the illness was believed to be a fulminant form of community-acquired pneumonia caused by the organism. This is a rare case and autopsy finding and, as such, contributes to the scarce literature.

The patient was a 27-year-old woman who developed a fever 2 days before hospital consultation and received a prescription for an antipyretic analgesic by a nearby physician and sent home. However, because dyspnea appeared on the day before consultation, the hospital was consulted, and it was hospitalization by a diagnosis of the right lobar pneumonia in an image in the hospital. Although she was treated with antibiotics (aminobenzylpenicillin [ABPC]/sulbactam [SBT]), her respiratory status became exacerbated, with a rapid reduction in blood pressure. She was transferred to the authors’ hospital after intubation in the middle of the night.

The patient was a beautician, with a medical history of untreated, intermittent bronchial asthma. She smoked 20 cigarettes per day, but had no history of alcohol consumption or allergies, nor a history of bird exposure, hot-spring public bathing, or extensive foreign travel. On admission, her symptoms were G2VTM2 on the Glasgow Coma Scale, in an intubated state with 10 L of oxygen by mask. The patient exhibited tachycardia (heart rate, 110 beats/min), hypotension (blood pressure, 85/65mmHg) and decreased body temperature (35.7?), with a respiratory rate of 24 breaths/min. Oxygen saturation (SpO2) was not measured for peripheral coldness. On auscultation, breath sounds were diminished in the right embryonate. An infiltrative shadow with air bronchogram was apparent at the top right corner embryonate on chest X-ray at the previous hospitalization. Similarly, simple chest computed tomography revealed an infiltrative shadow on the right superior lobe. These findings were absent in the right lower lung field, left embryonate (Figure 1).

Corticosteroids, vasopressors and sustained hemofiltration dialysis were initiated. Ventilatory volume decreased, and suction of fluids secreted from the airway, which were significant and frequent, was required. Due to progression of acidemia, extracorporeal membrane oxygenation (ECMO) was initiated. ABPC/SBT and levofloxacin were continued, and amikacin (AMK) was added because a large quantity of Gram-negative bacilli was confirmed on sputum gram-stain of secreted airway fluids. Additionally, endotoxin adsorption therapy was administered because blood endotoxin levels increased to 25 pg/ml. Nevertheless, the patient experienced sudden cardiac arrest 46 h after hospitalization. Cardiopulmonary resuscitation was performed immediately, and a heartbeat was rescued once; however, blood pressure could not be maintained, nor could heart rate after catecholamine administration. Death was confirmed 90 min after the first cardiac arrest. A pathological autopsy was performed. A sectioned surface of the lung is shown in Figure 2, with an invasive entity found in the right superior lobe. Evidence of pulmonary hemorrhage was also found. As the main lesion, macroscopic findings indicated that multiple organ failure was not found in the hemorrhagic pneumonia of both lungs. 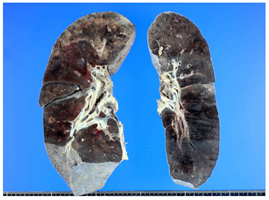 Figure 2: Pathological anatomy findings (macroscopic) from a sectioned surface of the lung. An invasive entity is apparent in the right superior lobe. General evidence of pulmonary hemorrhage is apparent.

Macroscopic imaging of the lung revealed that alveolar bleeding was the main evidence of hemorrhagic pneumonia with neutrophilic infiltration. Higher-power imaging suggested the presence of Pseudomonas aeruginosa supported by Gram-negative bacilli stained by periodic acid-Schiff staining (Figure 3). P. aeruginosa grew in all cultures of secretions from the right superior lobe, blood cultures of the airway, and the pathological anatomy. Septic shock due to pseudomonas pneumonia was diagnosed.

Pneumonia caused by P. aeruginosa is a predominantly nosocomial infection [3], and is extremely rare and does not often occur without underlying disease and risk factor(s) such as those exhibited by the patient described in the present report [3, 6]. Similar to Legionella, the use of a humidifier and/or foaming bathtubs are known to cause P. aeruginosa pneumonia; however, few such cases have been reported [3, 6]. In community-acquired pneumonia, P. aeruginosa is not usually considered as a primary causative organism of community-acquired pneumonia. More often, primary causative pneumococcus organisms, such as H. influenzae, or primary causative organisms of atypical pneumonia, such as Mycoplasma pneumoniae, Chlamydia pneumoniae, and Legionella are suspected [1-4]. It is extremely difficult to predict the bacterial origin of pneumonia as P. aeruginosa before culture results are confirmed, unless pneumonia due to Gram-negative bacilli from gram staining of sputum is strongly suspected.

Pneumonias caused by nosocomial infection(s) and underlying respiratory disease are usually sudden. Despite the rarity of pseudomonal community-acquired pneumonias without respiratory underlying disease, many die from a fulminant course similar to this case [7, 8]. Henderson et al. [7], reported two cases of P. aeruginosa pneumonia without underlying disease, but who already exhibited shock and significant hypoxemia, similar to our case, at the hospital visit, and died within several hours after hospitalization. P. aeruginosa was not suspected in these cases, but became clear after culture results and death, similar to the case described in the present report. One patient was a 52-year-old man, in whom Legionella was suspected as the primary causative organism. He died 1 h after hospitalization without responding to treatment. On autopsy, air vesicles were full of bloody decoction, and bleeding was found in both adrenal glands. Friedlander's bacillus was the suspected primary causative organism in other case, a 27-year-old woman, who died 10 h after hospitalization without responding to vasopressor and oxygenation. On autopsy, air vesicles were full of bloody decoction. The disease course in both individuals was extremely violent, and both died despite gentamicin susceptibility. The prognosis of the Pseudomonas aeruginosa community-acquired pneumonia is extremely poor. Rello et al. examined 204 cases of community-acquired pneumonia of the severe form that required an intensive care, eight case of those are pseudomonas pneumonia and reported that seven of eight case died [8].

In this case, the patient was complicated by disseminated intravascular coagulation, septic shock and acute respiratory distress syndrome, and was suddenly aggravated. Despite combined multi-modality therapy, the patient died on the fourth day of illness. There was no consultation with the medical institution, and underlying disease associated with smoking history in youth was not found. Additionally, the P. aeruginosa species detected had good chemical sensitivity to systemic carbapenem and quinolone, with no results indicating resistance. It is not apparent why P. aeruginosa pneumonia without underlying disease exhibits a violent course. Both patients described by Henderson et al. died < 36 h from onset and, even if diagnosis is difficult, the violent course cannot be explained solely by a delay in treatment. Because case 1 described by Henderson et al. exhibited bleeding in both adrenal glands, Waterhouse-Friderichsen syndrome should have been considered [9] due to similar meningococcal pathology. However, bilateral adrenal hemorrhage is not necessarily caused by P. aeruginosa pneumonia all cases. Evidence of adrenal hemorrhage was not found at autopsy in the present case.

P. aeruginosa is a bacterial species not commonly assumed to be the cause of community-acquired pneumonia; however, it should be considered in cases of severe pneumonia with rapid exacerbation, for which it is necessary to start a broad-spectrum antimicrobial agent at an early stage.