Introduction: This study’s objective was to compare the differences in the effects of intravenous esmolol and diltiazem on patients having atrial fibrillation with RVR.

Methods: The measured parameters were the number of hospital re-admissions, length of hospital stay, time taken for rate control, and side effects like hypotension and pacemaker use. This retrospective cohort study included all adult patients with A-fib with RVR treated with IV esmolol and diltiazem from an academic center between 2016-2018. Patients who were on rhythm control or required cardioversion within 24 hours were excluded. Categorical and continuous outcomes were compared with chi-square and t-tests respectively. Cox-regression was used for the length of hospital-stay and time taken for rate control and the hazard ratio was reported. For the number of hospital re-admissions, linear regression was used.

Conclusion: Although observations based on our small unmatched retrospective study for the measured parameters showed a superiority trend for esmolol, especially with regards to less hypotension, the differences were not statistically significant.

Atrial fibrillation (AF) is the most common sustained arrhythmia. AF is often associated with significant morbidity and mortality [1, 2]. Although in-hospital mortality due to atrial fibrillation decreased from 1.2% to 0.9% between 2000 to 2010, hospitalizations due to AF increased by 23%, especially for patients older than 65 years of age [2, 3]. In addition to these concerns, AF also poses an economic burden on remove the health care and adds approximately $26 billion to the US healthcare bill annually [2].

Esmolol, a cardio selective beta blocker, is a short acting medication. It blocks adrenergic activity and decreases heart rate, contractility, and conduction that leads to increase in atrioventricular refractory time and decreases the oxygen demand. It is an intravenous agent and has a rapid mechanism of action. The onset of action is 60 seconds and reaches steady state in five minutes. The half-life of esmolol is nine minutes and it is cleared rapidly by the kidneys. Due to its short half-life and rapid metabolism, it is effectively cleared within 10-30 minutes after the discontinuation of the infusion. This makes it very easily titratable [6]. The dose of esmolol for A-fib with RVR is an optional loading dose of 500 mcg/kg over 1 minute followed by an infusion for 4 minutes. It may then be further up-titrated based on the response with the maximum dose of 300 mcg/kg/min.

Diltiazem is a non-dihydropyridine calcium channel blocker that acts primarily by inhibiting the inflow of calcium ions in the cardiac muscles, sinoatrial node, and atrioventricular node. This causes negative chronotropic and inotropic effects that lead to decreased oxygen demand. The elimination half-life of IV diltiazem is 6.9 hours and it reaches steady state after 38 hours of continuous infusion. Diltiazem can be used intravenously or orally in atrial fibrillation [7]. The dose of diltiazem for AF with RVR is 0.25 mg/kg (average dose 20 mg) over 2 minutes and with another optional bolus of 0.35 mg/kg (average dose 25 mg) followed by continuous infusion with initial 5 to 10 mg/hour and up-titrating according to the response with maximum dose of 15 mg/hour.

There are no randomized control trials that compare the efficacy and side effects of these two rate control agents. Moreover, very few observational studies comparing these two medications in the settings of atrial fibrillation with rapid ventricular response in short as well as long term outcomes are currently available. In our retrospective observational study, we compared continuous infusion of esmolol vs. diltiazem in atrial fibrillation with rapid ventricular response patients. The primary objective of this study was to compare the differences between the impact of esmolol and diltiazem IV drips on time taken for rate control, number of hospital re-admissions, and length of hospital stay. The secondary objective was to compare adverse effects like hypotension and use of pacemakers.

A brief description of the variables we used in our study is given below.

Time to rate control: Time taken to achieve resting Heart Rate (HR) of less than 110 in minutes sustained for more than 60 minutes.

Length of stay: Duration of stay in which patient was

treated for A-fib with RVR for the hospitalization.

Hypotension: Systolic blood pressure of less than 90 after 30 minutes from starting intravenous drip.

Inclusion criteria was all adult patients suffering from atrial fibrillation with RVR who were treated with intravenous (IV) drip of esmolol and diltiazem between 06/30/2016 to 06/30/2018 from Memorial Medical Center. Exclusion criteria was atrial fibrillation without rapid ventricular response, use of other antiarrhythmic medication for rhythm control, hemodynamically unstable patients, and direct current cardioversion.

The study hospital is a 507-bed not-for-profit tertiary care center affiliated with a university. This study obtained approval from the Institutional Review Board. It was determined that this study does not meet the criteria for research involving human subjects according to 45 CFR 46.101 and 45 CFR 46.102.

Data of age, gender, and International Classification of Disease (ICD) diagnosis codes from electronic medical record (de-identified for analysis) were collected. The data of all patients with atrial fibrillation ICD code was first extracted electronically. Then, the data set was narrowed down based on the use of IV esmolol and IV diltiazem.  The consequent data set was further narrowed down manually by chart review using exclusion criteria mentioned above. The primary and secondary outcomes were collected by manual retrospective chart review. Both study groups used one-time initial bolus: those in diltiazem group used 20 mg of initial dose followed by an infusion and those in esmolol group used 500mcg/kg initial dose followed by an infusion. However, we did not record if a second or subsequent bolus was given.

Categorical and continuous outcomes were compared with chi squared and t-tests respectively. For length of stay and time to rate control, cox regression model was used and reported as hazard ratio. Linear regression was used to model number of hospital re-admissions. P - value less than 0.05 where considered statistically significant.

Figures 1, 2, and 3 show the summary of the responses tracked. Average time to rate control was 1654 minutes for esmolol group and that for diltiazem was 1072 ± 241 minutes (p-value - 0.337). The average length of stay was 9 ± 2.16 days for esmolol and 7.98 ± 1.53 days for diltiazem (p-value - 0.756) and number of hospital readmissions observed in the two-year period was 1.67 ± 0.31 for esmolol and 2.69 ± 0.42 for diltiazem (p-value - 0.240).  Secondary outcomes measured were hypotension and use of pacemaker. Here, 10 out of 48 patients (~21%) in diltiazem group developed hypotension within 30 minutes of infusion, and none of the 12 patients in esmolol group developed hypotension after the IV infusion. However, this effect did not reach statistical significance likely due to the small number of patients. Only one patient in the study (from diltiazem group) required implantation of permanent pacemaker. Therefore, no analysis was performed on the use of pacemakers. In multivariate regression on number of hospital re-admissions, the use of esmolol over diltiazem had a coefficient of -0.617 with p-value of 0.498. Hazard ratio of esmolol with reference to diltiazem was 0.89 (95 % confidence interval: 0.45-1.76) with p-value of 0.73 for time to rate control was 0.99 (95 % CI 0.50 – 1.97) with p-value of 0.98 for length of stay.

Table 1: Baseline Characteristics of the patients in diltiazem and esmolol. 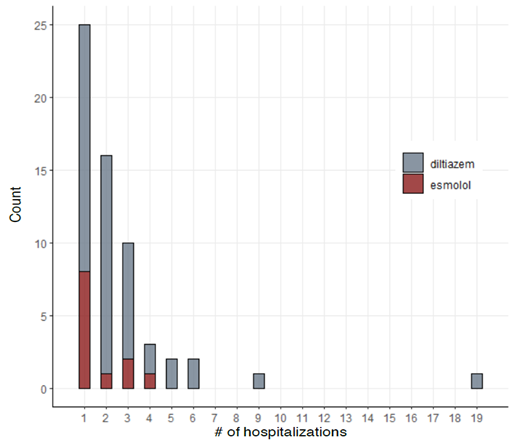 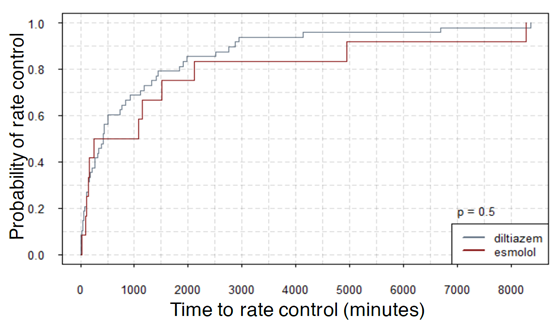 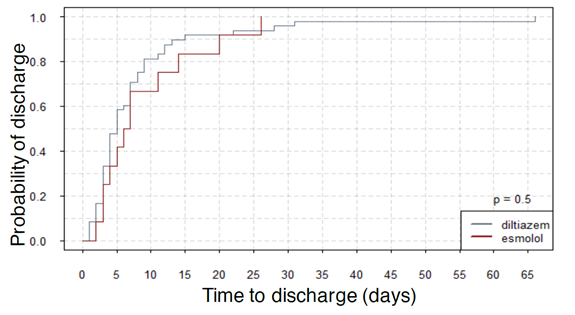 The pathophysiology of atrial fibrillation is not fully understood, but triggers from pulmonary veins are theorized to play key role. Once the initial trigger is fired, the abnormal atrial tissue can sustain the irregular rhythm. Over time with atrial fibrillation, atrial remodeling causes the progression to permanent atrial fibrillation [8]. Patients with atrial fibrillation, if untreated, are at increased risk of thromboembolic events, heart failure, and death [3]. Also, long term uncontrolled atrial fibrillation can cause tachycardia mediated cardiomyopathy [8]. In this study, we looked at the differences between esmolol and diltiazem on three main outcomes-time to rate control, length of hospital-stay, and number of hospital re-admissions along with the side effects (such as hypotension) associated with medications.

In terms of rate control, both rate control agents can effectively control rapid ventricular rate in atrial fibrillation. However, the time taken could vary. As mentioned earlier, we used HR <110 (lenient strategy) as the threshold for rate control. It is to be noted that lenient rate control (HR<110 bpm) is found to be as effective as tight rate control (HR<80 bpm) when it comes to cardiovascular outcomes [9]. Our study demonstrated that no significant difference in esmolol and diltiazem exists for achieving rate control. This was also seen in a retrospective study [10] evaluated the safety and efficacy in acute rate control for diltiazem vs. esmolol in patients with A fib with RVR. The study found that in acute setting in emergency department, there was no significant difference in terms of patients achieving rate control.

One of the important side-effects of both esmolol and diltiazem is hypotension which sometime precludes their use. When we investigated increase in hypotension between the two groups, we found none of the patients on the esmolol were hypotensive compared to almost 21% of the diltiazem group. This was even though the mean blood pressure at baseline was lower in the esmolol group. The p-value did not reach significance, and this could be attributed to our small sample size. Since there were no patients in the esmolol group who developed hypotension, we could not conduct a multivariate analysis.  Contrary to our findings, one retrospective study [13] did not find any difference in hypotension post infusion.

The reason behind choosing one medication over another in all the studies, including our study, is unclear as patients involved in all these studies were heterogeneous and possibly had underlying comorbidities. Certain clinical conditions such as heart failure precludes the use of a calcium channel blocker such as diltiazem whereas airway diseases might preclude the use of a beta blocker such as esmolol. Clinicians may also have a preference to use esmolol in patients with lower baseline blood pressures due to its shorter half-life. These clinical considerations might play a role in choosing one over the other.

The first limitation of this study is that the number of patients on esmolol (n = 12) was very small. Second, some elements of this study included manual chart review. Limitations and errors related to manual review could be present. Third, for parameters such as length of stay and rehospitalizations there could be other confounding factors such as coexisting co-morbidities which we could not account for because of the small sample size. Finally, the limitation is that the is study non-randomized and retrospective study.

Atrial fibrillation remains as one of the most common arrhythmias, and we are constantly trying to establish best possible ways to treat this condition. When considering our options in hemodynamically stable patients for rate control, we are presented with a choice of beta-blockers or calcium channel blockers. Diltiazem IV is used more frequently compared to esmolol IV for control of RVR. Based on our small unmatched retrospective study there is no significant difference between these two agents in terms of time taken to rate control, length of hospital-stay, and number of hospital re-admissions. However, there were no hypotension events on esmolol vs almost 21% hypotension events on diltiazem group which can be a potential benefit for the use of esmolol. To further investigate this, we need for larger population studies.

All authors have no conflict of interest to declare.