Aortic thrombosis is a rare disease entity which has been reported to be related to malignancy and chemotherapeutic agents. Here we present the first case in literature about a colon cancer patient with well-controlled vascular risk factors who developed acute aortic thrombosis after the first cycle of adjuvant chemotherapy with capecitabine-oxaliplatin. Risk factors and causal relationship between systemic anti-cancer agents and this condition are reviewed and discussed.

Aortic thrombosis in the absence of atherosclerosis, dissection and aneurysm is extremely rare but potentially devastating due to embolic events to the brain, coronary vessels, intra-abdominal organs and extremities. Cancer therapeutic agents including chemotherapy and vascular endothelial growth factor inhibitors were reported as risk factors [1, 2]. We herein present a case to describe the relationship between acute aortic thrombus and adjuvant capecitabine-oxaliplatin in a colon cancer patient without any predisposing factors.

Six weeks post-operation, she was started on adjuvant chemotherapy with oral capecitabine at 1000 mg/m2 on days one to fourteen and intravenous oxaliplatin at 130 mg /m2 on day one. Her Eastern Cooperative Oncology Group (ECOG) performance status was zero.

On the fifteenth day of the first cycle, she was admitted for malaise, epigastric pain and high output stoma. She reported no suspicious food intake. She was clinically stable and afebrile, but dehydrated. Abdominal examination showed mild tenderness over epigastrium without any peritoneal signs or organomegaly. Greenish loose stool was noted from her ileostomy.

She was treated with intravenous fluid replacement. On the second day, she had severe abdominal pain, shock and hypothermia. Abdominal examination found generalized guarding and fresh blood from ileostomy. Abdominal X-Ray demonstrated “stack-of-coin appearance” suspicious of ischemic bowel (Figure 1). Bloods showed picture of disseminated intravascular coagulation with pancytopenia and deranged clotting profile, and metabolic acidosis with pH of 7.20. She was immediately started on intravenous pantoprazole and broad-spectrum antibiotics. An urgent CT of the abdomen and pelvis demonstrated a thrombus in the descending thoracic aorta above the celiac axis and right portal vein (Figure 2), associated with extensive ischemic involvement of the small bowel, both kidneys, spleen and liver (Figure 3).

Exploratory laparotomy and resection of ischemic organs were offered. The family opted for conservative management after discussion due to expected high risk of “open-and-close” and intraoperative mortality. The patient developed rapid deterioration and succumbed on the same day. 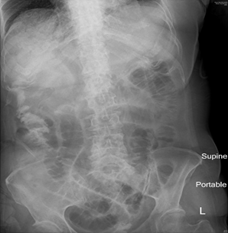 The cause of death in this patient was extensive ischemia of the abdominal viscera secondary to an aortic thrombus. This condition is a rare life-threatening event more commonly associated with an atherosclerotic aorta, large embolus, or acute occlusion of an abdominal aortic aneurysm [4]. Although our patient had hypertension and hyperlipidemia, they were under control. Besides, neither did she have other risk factors of atherosclerosis such as smoking and diabetes, nor risk factors for embolic events including valvular heart disease or arrhythmias. Pre-operative imaging also did not reveal any evidence of aortic calcifications, atherosclerotic plaques or aneurysmal changes.

Without the above-mentioned factors, thrombosis in a non-aneurysmal, non-atherosclerotic aorta is exceedingly uncommon. Other reported risk factors for arterial thromboembolism include hypercoagulable disorders such as Protein C or S deficiency, antithrombin III deficiency, Factor V Leiden and underlying malignancy [5]. However, patient’s age being older than the typical onset of thrombotic events in familial disorders (before 50 years old) [6] and absence of active cancer makes these factors less likely to be the explained cause of our patient.

Without other apparent underlying causes of thrombotic tendency, chemotherapy is postulated to be the cause based on the timing of the event in relation to the initiation of therapy. This is the first report to describe a possible relationship between capecitabine-oxaliplatin and acute aortic thrombosis.

One large population based matched-cohort study using Surveillance, Epidemiology, and End Results (SEER) data identified a two-fold higher risk of arterial thromboembolism six months after cancer diagnosis (4.7% versus 2.2%; hazard ratio 2.2; 95% confidence interval 2.1 to 2.3), which generally resolved by one year [7]. Some respondents raised the importance of vascular toxicities of cancer therapies in contributing the higher arterial thromboembolism [8].

Cisplatin is the most commonly reported culprit [1, 9-12], with an 8.3% incidence noted in a retrospective analysis of 932 patients [13]. Underlying mechanisms include hypomagnesemia causing arterial spasm, endothelial injury, and increased von Willebrand factors [14]. Our patient was treated with oxaliplatin, which is another platinum-based chemotherapy with similar mechanism of action. Karabacak et al. reported a metastatic colon cancer patient who developed upper limb ischemia after three cycles of 5-fluorouracil and oxaliplatin [15] but not when previously given 5-fluorouracil alone, demonstrating a possible causal relationship between oxaliplatin and arterial thrombosis. A study on advanced gastric cancer also described an 1.1% incidence of arterial thrombosis in patients treated with oxaliplatin-based triplets, but was less compared to cisplatin-based triplets with incidence of 2.9% (p=0.044) [16].

Capecitabine, which is a prodrug of 5-fluorouracil, is more reported to cause coronary artery thrombosis resulting in cardiotoxicity; vascular complications in large vessels are less described. Potential mechanisms hypothesized for capecitabine/ 5-fluorouracil induced cardiotoxicity include vasospasm, endothelial injury, and an increase in thrombogenic substances such as fibrinopeptide A [17]. These postulations could theoretically result in large vessel thrombosis as well. This was illustrated by a recently published case report involving a Korean patient with no known vascular risk factors who developed aortic thrombosis after receiving adjuvant single agent capecitabine for resected colon cancer [18]. From literature review, it is interesting to note that most reported cases were given platinum based combination chemotherapy, most commonly with 5-fluorouracil. Whether there exist any synergistic effects between these two chemotherapeutic agents in generating a pro-thrombotic state warrants further study.

The clinical presentation, severity of symptoms and prognosis of acute aortic thrombosis is vast depending on the site, size of the arterial thrombus and presence of emboli. For example, patients with thoracic aortic thrombosis may present with myocardial infarction or cerebrovascular events from clot embolism, while thrombosis at the descending aorta may result in small bowel or lower limb ischemia. An immediate CT angiography of the aorta should be arranged to confirm the diagnosis when there is clinical suspicion.

The optimal management remains debated. Some authors promote anticoagulation as first line treatment and to consider surgical intervention only if recurrent thrombosis, contraindications to anticoagulation or mobile thrombus [5, 19]. On the other hand, some suggest immediate surgical revascularization [4]. Endovascular thrombectomy or stent graft insertion is preferred over open thrombectomy or extra-anatomical bypass because of lower surgical risks, but feasibility depends on size and location of thrombus [5]. Successful cases of early treatment have been described [20, 21]. Boon et al. reported a 70-year-old metastatic gastric cancer patient who developed acute abdominal and lumbar pains five days after first cycle of epirubicin, oxaliplatin and capecitabine (EOX) due to acute thrombosis within the abdominal aorta, lumbar and right common iliac artery. His condition improved after low molecular weight heparin without surgical intervention, and subsequently switched to second-line chemotherapy with docetaxel uneventfully [20]. Kim et al. also reported two cases of successful treatments with systemic anticoagulation and another two cases with endovascular management [21].

Due to the potentially serious consequences, assessment for risk factors of arterial thrombosis while on chemotherapy is warranted. Any pre-existing cardiovascular diseases (e.g. Hypertension, arrhythmias, aortic aneurysm) have to be optimally managed before the start of chemotherapy. Besides, caution should be exercised when using potentially pro-thrombotic supportive measures during chemotherapy, including indwelling vascular catheters, high dose dexamethasone as antiemetic (greater or equal to 80 mg per cycle) [22, 23], and granulocyte colony-stimulating factor [24, 25]. Clinicians’ awareness of this differential diagnosis in patients presenting with sudden onset of severe abdominal pain or limb paralysis is paramount to allow early recognition and timely management. Switching to other chemotherapy regimes should be carefully considered after the patient recovers from the acute episode.

Acute aortic thrombosis could be a rare complication of chemotherapy with capecitabine and oxaliplatin. Further studies are required to understand the mechanism and predictive factors for this life threatening complication, especially in patients without preexisting vascular risk factors.

There are no conflicts of interest with writing this manuscript.