Application of Capnography Waveform Analyses for Evaluation of Recovery Process in a Patient with Heart Failure: A Case Report

Resting end-tidal CO2 levels obtained from capnography are associated with the severity of heart failure (HF). It has not been fully investigated whether other respiratory parameters acquired from detailed capnography waveform analyses could evaluate the recovery process in HF patients. In this case, the analysis of nasal capnography waveforms (diurnal five minutes recording) was performed to monitor and analyze end-tidal CO2 (ETCO2) values, inspiratory/expiratory ratio and respiratory intervals. We observed that these three parameters increased concurrently with decreasing plasma BNP levels during the recovery stage of HF. The kurtosis of frequency distributions of capnography waveforms became larger as HF improved. Proper utilization of these analyses could evaluate HF severity during the recovery process in patients with HF.

Abnormal breathing, such as irregular rapid and shallow breathing is frequently observed in heart failure (HF) patients and is an important therapeutic target. The increase of capillary pressure could cause a fluid accumulation in the systemic and pulmonary circulations in HF patients. Fluid accumulation in the alveoli could prevent the exhalation of carbon dioxide (CO2). CO2 reacts with water and decomposes into bicarbonate ions and hydrogen ions, resulting in the increase of hydrogen ions in the blood [1]. Irregular rapid and shallow breathing is commonly seen in HF patients. This is caused by increased chemoreceptor sensitivity in the medulla oblongata towards increased hydrogen ion in the blood. Pulmonary C-fibers, which connects with the medulla oblongata, are stimulated by lung congestion and interstitial edema. These situations could enhance central chemoreceptor sensitivity and destabilize the CO2 dependent negative feedback system [2]. According to thise mechanisms, rapid and shallow breathing and irregular respiration in terms and space could come into existence in unstable HF patients. Besides these situations, circulation delay caused by decreased cardiac functions could lead to the variation of respiratory rhythm. The blood CO2 levels determine the respiratory mode, which may reflect the severity of HF. Further, because these unstable respirations in terms of time and space are caused by the concentration of circulatory hydrogen ion, the measurement of CO2 is a reasonable methodological approach to evaluate the HF severity or recovery process of HF. Capnography is used to continuously monitor ventilation in patients with general operation to ensure that anesthesia is delivered safely. Diseases and abnormalities related to breathing and circulation can be also be diagnosed quickly by analyzing capnography waveforms [3]. Moreover, end-tidal CO2 (ETCO2) monitoring is a noninvasive technique and is extensively used as an objective parameter to determine whether appropriate ventilation is performed during operation [4]. Additionally, resting ETCO2 monitoring is used in the cardiac exercise test for HF patients, and it could be associated with the severity of HF or exercise performance in HF patients.

There are only a few reports on the detailed assessment of capnography waveform analyses in HF patients. We have already demonstrated that inspiratory/expiratory (I/E) ratio, respiratory intervals, expiratory/inspiratory velocity and frequency distributions could be calculated through the capnoraphy waveforms. However, it has not been fully evaluated that these novel respiratory parameters could be associated with the severity of HF. In this unique case, we show that some parameters acquired from detailed capnography waveform analyses could be effective to evaluate the recovery process of HF.

The patient was a 79-year-old man hospitalized for HF complicated by ischemic heart disease. Figure 1 shows the patient’s clinical course after hospital admission. The patient exhibited shortness of breath on exertion and exhibited slight congestion on chest radiography. Echocardiography showed a left ventricular ejection fraction of 44.4 % and a left ventricular dimension of 68.4 mm. His circulating brain natriuretic peptide (BNP) levels, measured by blood sampling, were 851.3 pg/ml. On the basis of these findings he was diagnosed with HF with reduced ejection fraction (HFrEF). After admission, he was administered transnasal oxygen at 1 L/min, a continuous infusion of carperitide 0.1 γ, and intravenous injections of 20 mg furosemide for 5 days. Oral diuretic drugs (Azosemide: 30mg, Spironolactone: 25 mg) were also administered after the treatment using intravenous drugs. An angiotensin converting enzyme inhibitor and a beta-blocker had already been administered.

However, plasma BNP levels did not reduce significantly one month after the treatment of HF (plasma BNP levels: 838.7 pg/ml). He was suspected of having insomnia that was related to HF. Because his polysomnography findings showed that the apnea-hypopnea index was 56/hour, the nocturnal CPAP therapy (DreamStation, AutoCPAP; PHILIPS Respironics, Murrysvill, PA, USA) was initiated at a low pressure of PEEP (4 cmH2O). After the CPAP therapy, plasma BNP levels significantly decreased from 838.7 to 656.9 pg/ml, and his apnea-hypopnea index decreased from 56 to 25/hour, which was acquired from repeated polysomnography analyses. These results could imply that abnormal breathing such as sleep apnea was associated with the worsening HF. As central apnea remained after CPAP therapy, ASV therapy (ASV, AutoASV; PHILIPS Respironics, Murrysvill, PA, USA) began at a low pressure of PEEP (4 cmH2O) and pressure support (0–4 cmH2O). Finally, plasma BNP levels decreased from 656.9 to 494.5 pg/ml. 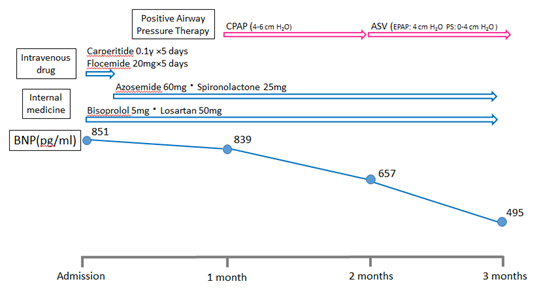 After the patient rested in a supine posture on the bed in a quiet examination room, continuous recording of CO2 (using an nasal expiratory CO2 gas monitor, TG-980, Nihon Kohden Co. Ltd, Japan) were performed before HF therapy, 1month, 2 months, and 3 months after the HF treatment. A CO2 gas monitor (OLG-3800TM; Nihon Kohden Co. Ltd, Japan) was used to monitor CO2. The CO2 data from the expiratory gas monitor were transferred to a biological signal recorder (PowerLab 26TTM; AD Instruments, Colorado Springs, CO, USA), which consisted of an A/D computer and another computer installed with a signal acquisition/analysis software (Chart Pro 5TM; AD Instruments). In order to identify the temporal changes in ETCO2, the local ETCO2 peaks of the CO2 waveform was identified. The respiratory interval was calculated by the peak-peak interval on the ETCO2 values of the CO2 waveforms (Figure 2A, B, asterisk). The differential coefficient curve was constructed and the mean of the maximum value of CO2 partial pressure during expiration was calculated by identifying the peak on the positive side of the graph. The smoothened differential coefficient was defined as the expiratory time (from the point, where differential coefficients changes from negative to positive, to the point, where changes from positive to negative, Figure 2C: magenta lines). The peak on the negative side of the differential coefficient curve was set as the minimum value of CO2 partial pressure during inspiration (Figure 2C: magenta lines) and its mean was calculated. Similarly, the central moving average was calculated and the time for the differential coefficient to turn from negative to positive was set as the inspiratory time. Discrete fourier transform was used for analyzing frequency distribution of capnography waveforms, which are composed by discrete signals. Ratio of each power to the sum of all power was calculated and demonstrated (Figure 2D). Signal processing was performed using MATLAB TM (2017a, Mathworks, Inc. Natick, Massachusetts USA) software. The kurtosis of frequency distributions was statistically calculated before HF therapy, 1month, 2 months, and 3 months after the HF treatment. 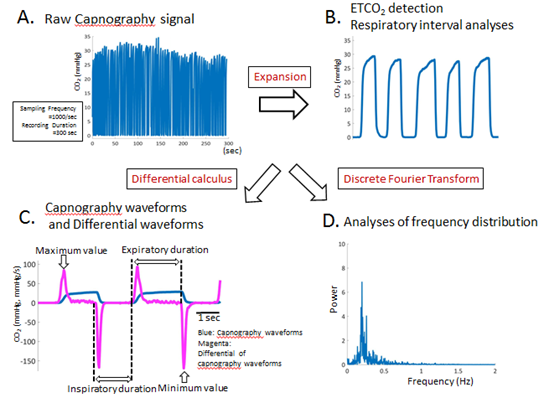 Figure 2: Summarizes some analyzing methods for obtaining parameters acquired from capnography waveforms. (A): Figure 2A shows the analyses of raw waveforms of CO2 signal. Sampling frequency is 1000/sec, and recording duration is 300 sec, respectively. (B): The distance between adjacent ETCO2 points is defined as the respiratory interval. Moreover, mean ETCO2 and mean respiratory interval were calculated. CO2 = carbon dioxide, ETCO2 = end-tidal CO2. (C): Representative capnography waveforms (blue lines) and their differential CO2 waveform (magenta lines) obtained from an enrolled HF patient in this study. The differential CO2 waveform was constructed, and the local maximum and minimum values were calculated where the expiratory, inspiratory durations and expiratory/inspiratory ratio could be easily identified and calculated. (D): Figure 2D shows the representative frequency distributions, which were acquired by ETCO2 waveforms using discrete fourier transform. Ratio of each power to the sum of all power was calculated and demonstrated. The kurtosis of the frequency distributions was statistically calculated in each HF patients. ETCO2 = end-tidal CO2, HF = heart failure. 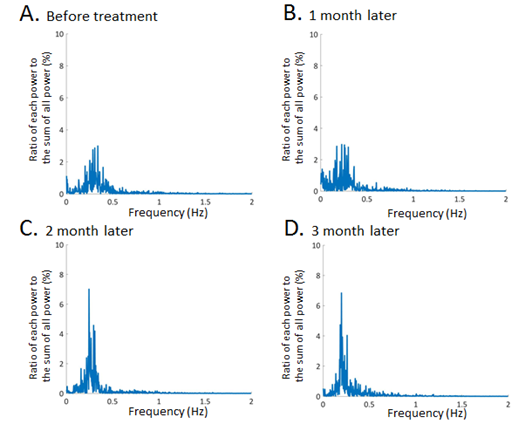 We observed this patient for 3 months and analyzed diurnal capnography waveforms every one month. We calculate mean ETCO2 levels, I/E ratio and respiratory intervals using our original algorithm. We have already reported that capnography waveform analyses using our original algorithm could be effective for respiratory management during catheter ablation, where ETCO2 values, respiratory interval and I/E ratios could be effective for evaluating respiratory condition in patients with catheter ablation procedure. In this case report, mean ETCO2 levels and respiratory intervals gradually increased while plasma BNP decreased (Figure 3A and B), showing that unstable respiration, such as hyperventilation, could improve through the pharmacological and non-pharmacological therapy. These results may create the hypothesis that rapid and shallow breathing could change to slow, deep and stable breathing by the treatment of HF. Furthermore, I/E ratio increased after the treatment of HF in this study, indicating respiratory stability may mean that expiratory duration is secured (Figure 3C). Because capnography waveform analyses could clarify the detailed respiratory changes in HF patients, diurnal short duration capnography waveform analyses could be effective for evaluation of the recovery process of HF.

Inspiration is normally an active process (requiring work), while expiration is passive and requires longer time for exhalation. Because the expiratory movement is a passive function which dose not requires diaphragm muscle strength, hyperventilation due to HF firstly reduces expiratory duration. It can be said that the expiratory function is easily affected by respiratory fluctuations in HF patients. Therefore, the adoption of these physiological characteristics regarding the changes of respiratory pattern could be applicable to evaluate the stages of HF. The use of diuretic drugs and the positive airway pressure therapy could remove the congestion of alveoli, resulting in the improvement of compliance of alveoli. Additionally, positive end-expiratory pressure could reduce the preload, which could lead to increase the cardiac function. These therapeutic interventions may promote the CO2 emissions and improve some respiratory parameters obtained by capnography analyses. According to these results, I/E ratio as well as the mean ETCO2 values and respiratory intervals could be an important parameter for evaluating the recovery process in HF patients. Interestingly, this case report could show that HF therapy made the frequency distributions of capnography waveforms sharpened for 3 months (Figure 4D). Furthermore, the maximum power is distributed around 0.2Hz after the HF treatment, indicating that respiratory frequency stabilized at 0.2Hz. The analyses using frequency distribution could show the respiratory stability. These mathematical approaches using discrete fourier analyses of capnography waveform is also effective to evaluate the stage of HF. Capnography waveform analysis is a simple, inexpensive and non-invasive technique. Additionally, capnography waveform analysis could be effective for home health monitoring in HF patients. Further larger studies is needed to clarify the effects of capnography analyses.

We would like to thank the outpatients department staff of the Matsumoto Kyoritsu Hospital for their help in this study.

The present study conducted according to the Declaration of Helsinki. The design, protocol, and handling of patient data were reviewed and approved by the Matsumoto Kyoritsu Hospital Ethics Committee (Approval No. 2019-005). The authors for this study carried out no animal studies. All patients provided informed consent.

Conflict of interest: None declared.

No funding was received.

TK obtained ethics approval, collected data and analyzed data through the mathematical approach. TK also drafted the manuscript and review it. MK helped the statistical analyses. TI, YW and HA conceived of the study and revised manuscript. All authors read and approved the final manuscript.