Background and aim: Diabetes mellitus (DM) is a disease characterized by chronic hyperglycemia caused by a lack of insulin or resistance, resulting in metabolism dysregulation, which accounts for the symptoms and complications of diabetes. The present study aimed to assess some biochemical markers such as C-reactive protein (CRP), lipid profile, and body mass index (BMI) in type 2 diabetes mellitus (T2DM) in Sudanese patients.

Conclusion: The study finally concludes the coexistence of dyslipidemia, overweight, obesity, and inflammation in diabetes, in general, and with more frequent in female diabetes when compared with their male counterparts.

Diabetes mellitus (DM) is a condition characterized by chronic hyperglycemia caused by a lack of or insulin resistance, resulting in dysregulation of carbohydrate, protein, and lipid metabolism, which accounts for the symptoms and complications of diabetes. Diabetes is expected to be the seventh leading cause of death by 2030, according to the World Health Organization [1]. According to recent estimates, diabetes affects 1.4 million people in Sudan, with a prevalence of 7.7% and more than 25,000 diabetes-related deaths [2]. However, Type 2 diabetes mellitus (T2DM) is accounted for about 90% of all diabetes cases worldwide. There is a well-established correlation between diabetes and systemic inflammation, which may be reflected in circulating c-reactive protein (CRP) levels [3]. Hepatocytes synthesize and release C- reactive protein, which is regulated by cytokines such as IL-6, IL-1, and TNF-, which are formed by adipocytes CRP, a responsive physiological marker of subclinical systemic inflammation, has been linked to hyperglycemia, insulin resistance, and overt T2DM in studies [4]. Furthermore, increased CRP levels have been identified in adult T2DM patients [5]. A recent study discovered a connection between CRP and the onset of T2DM. Obesity and hypertension were found to interact with each other in the older population ( > 50 years ) [6].

Previous research has attempted to link blood glucose levels to lipid abnormalities in the serum [7]. Lipid abnormalities are common in diabetes mellitus since insulin deficiency or resistance affects key enzymes and pathways in lipid metabolism. Furthermore, study findings indicate that the rise in the prevalence of T2DM among the body composition components is primarily due to body fats [8]. According to a recent study [9], hypercholesterolemia, hypertriglyceridemia, elevated LDL-C, and reduced HDL-C are all symptoms of dyslipidemia caused by diabetes. These results suggest that hyperlipidemia predominates over the higher prevalence of diabetic dyslipidemia. Furthermore, a recent cross-sectional study [10] found a high prevalence of obesity among diabetics, along with elevated levels of triglycerides, LDL-C, and CRP, implying that dyslipidemia and inflammation are coexisting in diabetes. Diabetics were 5.6 times more likely than non-diabetics to have elevated CRP levels, according to their results. They discovered that CRP levels had an important positive relationship with LDL-C and BMI (BMI). However, the relationship between certain biochemical markers and CRP in those patients is unclear. This study aimed to see whether there is a correlation between these biochemical markers, such as lipid profile, BMI, and C-reactive protein, and T2DM in Sudanese patients.

One hundred four patients with type two diabetes mellitus (56 men and 48 women, 40 to 70 years old) were randomly selected. The patients have no history of coronary heart disease, liver dysfunction, renal dysfunction, cardiac valvular disease, heart failure, tumor, immune diseases. A total number of 104, healthy individuals (56 men, 48 women, 40 to 70 years old) were recruited to represent the control group, with no history of diabetes mellitus or other diseases.

This study is an analytical case-control hospital-based study.

Permission to carry out this research was obtained from health authorities, and blood sample collection was carried out under the full supervision of medical doctors. All subjects included in this study were fully informed about the aim of this study.

Biochemical measurements were carried out using standard methods according to the procedures recommended by the manufacturer. CRP was measured turbid-metrically. Serum total cholesterol, HDL-C, LDL-C, and triglycerides were determined by spectrophotometry using standard enzymatic methods. Non-HDL-C, obtained by subtracting HDL-C from the

A proper calibrated of the high-quality electronic digital scale was used for measurement of both body weight (Kg) and height (cm). After collecting an individual's height and weight, the BMI was calculated as follow: B MI = Weight (Kg)/(Height in meters)2.

Statistical package for social science (SPSS), was used for data analysis. The data were expressed as means ± standard deviation. The one-way analysis of variance (ANOVA) was used to compare all parameters for the patient and control groups, and multiple comparisons were used to find the significance between the two groups.

Table (1) and Figure (1) represents the mean concentration of study parameters comparison in patients versus control, as fellow: 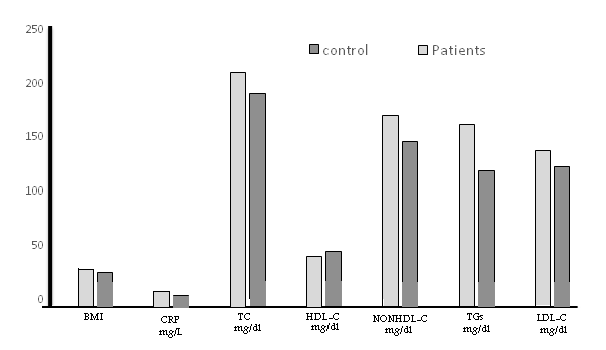 Diabetes is characterized by chronic hyperglycemia and disturbances of carbohydrate, lipid, and protein metabolism. Many studies have established that complications are mainly due to chronic hyperglycemia that exerts its effects through several mechanisms including dyslipidemia, platelet activation, and altered endothelial metabolism [11]. Deregulated lipid metabolism in type2 diabetes mellitus has been reported in many studies. Elevated mean total cholesterol, triglycerides, LDL-C, and lower HDL-C levels have been described in diabetes when compared with healthy non-diabetics [12], which is in line with our findings which is showed significantly higher mean serum levels of total cholesterol, triglycerides, LDL-C, and lower HDL-C in T2DM patients when compared with non-diabetics group. In diabetes, many factors may affect blood lipids levels because of the interrelationship between carbohydrate and lipid metabolism. Therefore, any disorder in carbohydrate metabolism leads to a disorder in lipid metabolism and vice versa. However, several studies showed that insulin affects the liver lipoproteins production and regulates the enzymatic activity of lipoprotein lipase and cholesterol ester transport protein, which is causes dyslipidemia in diabetes mellitus. Moreover, insulin deficiency may reduce the activity of hepatic lipase and several steps in the production of biologically active lipoprotein lipase [13].

Hypertriglyceridemia usually accompanies decreased HDL-C, which is also a prominent feature of plasma lipid abnormalities seen in an individual with diabetes. The possible mechanism responsible for hypertriglyceridemia may be due to increased hepatic secretion of very-low-density lipoprotein(VLDL) and delayed clearance of triglyceride-rich lipoproteins, which predominantly due to increased levels of substrate for triglycerides production, free fatty acids, and glucose [14]. In this study, a higher prevalence of obesity and overweight were observed in the diabetic group. This high prevalence supports the link between T2DM and obesity and had been reported to be a common finding in diabetic patients [15]. It has been well known that glucose disposal by lean body mass is markedly reduced and glucose metabolism was impaired in obese adults, while plasma concentration of non-esterified fatty acids and blood glycerol were high due to insulin resistance. Our finding of raised CRP in Sudanese withT2DM is consistent with studies in other populations [10, 16]. High CRP, dyslipidemia and LDL-C are reported to be the main risk factors for the chronic complications of T2DM. Prevalence of obesity and overweight in our study, together with elevation of triglycerides and CRP, suggests the coexistence of dysregulated lipids metabolism and inflammation in diabetes patients. Obesity in diabetic patients affects the CRP levels probably through hormonal changes linked to obesity. The high serum CRP concentration in diabetes reported in this study and by other authors could be due to an increase in adipose tissue mass that enhances cytokines production by adipocytes, cytokines production is known to stimulate the hepatic synthesis of CRP [17]. In this study, following other studies [18, 19] we observed a significant correlation between BMI and serum concentration of CRP in T2DM patients. It has been suggested that obesity and hyperglycemia induce oxidative stress [20], which results in the generation of free radicals in diabetic patients that could cause damage to the cell membrane and hence are associated with elevation of CRP a mediator of inflammation. Therefore, the effect of obesity and hyperglycemia could underline the elevation of c-reactive protein.

In this study lipid profile, BMI and CRP were higher in women compared with aging men. However, adverse changes induced by T2DM in HDL-C, LDL-C are more pronounced in women than men. In a recent study [21], significantly higher levels of total cholesterol and LDL-C were observed in female diabetics when compared with their male counterparts. These observations agree with earlier studies [22]. Several clinical studies suggested that their metabolic interaction between insulin and female sex hormones, for example, the low levels of female sex steroids associated with menopause are related to a decline in whole-body insulin-mediated glucose uptake. However, the exact cellular mechanisms behind this state of insulin resistance and the role of low female sex steroids are not fully understood [23]. Therefore, the decline in ovarian steroid function could result in alteration in circulating insulin levels and/or insulin receptor sensitivity. These disturbances of glucose homeostasis after ovariectomy were associated with serious derangement in lipid profile as indicated by a significant increase in serum total cholesterol, triglycerides, and LDL-C. An earlier study [24] demonstrated that, at a younger age, the relative risk of hypercholesterolemia is lower in women compared with men. During menopause total cholesterol and LDL-C levels rise by 10 and 14% respectively. Above 60 years of age, mean LDL-C is higher in women compared with men. At all ages, HDL-C levels are 0.26 to 0.36mmol/L higher in women compared with aging men. A recent study [25] reported that central obesity with an increase in visceral fats occurs more frequently after menopause, with a higher presence of comorbid risk factors and components of metabolic syndrome in women compared with aging men. However, abdominal visceral adipocytes produce systemic IL-6, IL-1, and TNF-α. Consequently, adipose tissue could play important role in the regulation of circulating CRP levels via interleukin-6 (IL-6) production. This study has a range of limitations it is a relatively small sample size. The clinical evidence such as HBA-1C and liver enzymes particularly ALT and AST levels were not assessed in our participants.

In this study T2DM induced hyperlipidemia such as hypercholesterolemia, hypertriglyceridemia, elevated LDL-C, and decreased HDL-C. Also, higher serum levels of CRP and its combination with obesity and overweight were significantly associated with an incident of T2DM. The study has shown that mean lipid profile components, obesity, overweight, and CRP were significantly higher in female diabetes when compared with their male counterparts. However, the prevalence of obesity and overweight in our study, together with elevation of lipid profile components and CRP, concludes the coexistence of dysregulated lipids metabolism, overweight, obesity, and inflammation in diabetes patients. Further research in a large study population of type2 diabetics is needed to test our findings.

We would like to thank the staff members of the Department of Biochemistry, College of Veterinary medicine, the University of Bahri for their support during the study.

Authors declare they have no competing interest.

This work did not receive any fund.

"Fortune Journals" offers reward program, under this each NIH funded article will rewarded with some amount. Hereby we are requesting all the NIH grant holders to submit their articles in Archives of Internal Medicine Research.