Purpose: The purpose of this study is to characterize the effects of the implant treatment on the distribution of the strain energy density in the maxillas using finite element analysis.

Methods: Three-dimensional maxillary bone models of a male and a female patient were constructed using their CT-images. The distributions of Young’s modulus were estimated from their bone mineral density distributions. Total six implants were embedded into each of the maxillary models. Finite element analysis of the maxilla models was then performed in order to assess the concentrations of the strain energy density, especially in the vicinity of the embedded implants under the two different loading conditions.

Results: In both models, strain energy density was concentrated especially around the right-molar implant, suggesting the outbreak of damage and subsequent absorption of bone tissue in this region. The female model with smaller size and lower bone density exhibited much higher localized concentration of the strain energy density than the male model. Therefore, a modified placement of the right-molar implant was then introduced into the female model and such high concentration was effectively reduced by using the inclined and longer implant.

Conclusion: This kind of three-dimensional modeling can clinically be used to predict the optimal implant treatment for each of dental patients.

In the case of implant treatment, four to eight implants were treated for a patient with edentulous maxilla or mandible [1-3], depending on the bone density and structural stability of the patient. Thus, occlusal forces during daily activities and unexpected forces such as bruxism [4,5] are supported by those inserted implants and the mechanical stresses were directly transmitted into the jaw bones. In the case of bruxism, the buccal mandibular movement causes the risk of implant fracture as the result of the bending overload [5]. It is therefore expected that a jaw bone with implants is facing much severer mechanical situations than a jaw bone with teeth. This kind of mechanical stress has been considered to cause bone absorption around the implants [6-8], resulting in the loosening and the subsequent removing of the implants. Therefore, finite element analysis of jaw bones with implants has actively been conducted in order to understand such mechanical conditions in the vicinity of the implants [9-10].

In the computational analysis of jaw bones, mandibles have mainly been investigated by constructing their three-dimensional models [11-15] and few attempts have been made to assess maxillas computationally. In general, structure of maxillas is more complex than that of mandibles [16], and it makes resulting in an increase of the risk of the surgical treatments [17]. For example, hollow structures named sinus maxillaries exist in the maxilla, and the bone tissue under the sinus is thin structure that makes the placement of implants difficult. In the vicinity of sinus maxillaries, an implant is usually tried to be inserted into the rear or front part of the sinus maxillaries, or inclined to avoid the sinus maxillaries.

In the field of computational mechanics, CT-image based modeling has actively been developed to construct the models of detailed bone structures considering their three-dimensional shapes, and has effectively been applied to the clinical problems in orthopedics [18-21] and dentistry [22-28]. In this modeling procedure, detailed bone models are constructed from CT-images by extracting the cross-sectional areas corresponding to the bones. Furthermore, the remodeling mechanism has been tried to be simulated by using various theoretical approaches in the bone tissue [29-34]. These approaches can be divided into two categories, macroscopic and microscopic approaches. One of the macroscopic approaches is based on a mechanical hypothesis in which the bone remodeling can be controlled by strain energy density [29-31,33]. On the other hand, one of the microscopic approaches tries to understand the remodeling mechanism by using the biomechanical responses of bone tissue related osteocytes [34].

In this study, two different types of maxilla models varying in the shape and the bone quality were constructed using the CT images of the edentulous maxilla of a male and a female patient. Total six implants were inserted into each of the maxilla models. Finite element analysis was performed to assess the effects of the implant treatment on the distribution of the strain energy density in the maxillas.

Two different types of maxilla models were constructed by using the CT images of the jaw bones of an 84 years old male and a 65 years old female. The total number of the CT images and the slice distance were 80 and 0.5 mm for the male and 37 and 1 mm for the female. Mechanical Finder (RCCM, Inc.), a software for finite element modeling and analysis of bone structure, was used in this study. Four-nodes tetrahedral elements were used to construct a finite element model of the maxilla. The total number of elements and nodes were 134223 and 630675 for the male model and 110052 and 505919 for the female model. Figure 1 shows the three-dimensional solid models. The models had the limited upper and side boundaries because only the limited regions of maxilla in which implants were supposed to be inserted were chosen by the dentist in charge and taken by CT in order to minimize the effects of X-ray radiation to the patients.

Figure 1: Computational models. The upper side is 84 years old male model, the lower side is 65 years old female model. The left side is a finite element model of edentulous maxilla, the right side is maxilla models with prosthesis.

The bone mineral density, , corresponding to each element was estimated from the averaged CT value (Hounsfield units) using the following formula [35]:

The Young’s modulus of the element was then calculated from the corresponding bone density by using the relationship by Keyak, et al. shown in Table 1 [18].

For each maxilla model, a prosthesis model consisting of six implants and a curved support was developed as shown in Figure 2. The diameter of all implants was chosen to be 3.75mm. The curved supports were determined so that they fitted to the curved shapes of the maxillas. The material of the implant and the curved support was assumed to be pure titanium with the Young’s modulus of 106 GPa and the Poisson’s ratio of 0.3. Figure 1 shows these prosthesis models were attached to the maxilla models. In a real structure of maxilla, gingiva usually exists in the space between the maxilla and the curved support and neglected in this modeling. The boundaries between maxilla and implants were assumed to be perfectly bonded. The length of each implant was set to be maximized in each implantation position as shown in Table 2. In Table 2, the number in the parenthesis expresses the insertion length of the implant within maxilla.

Table 2: Length of each implant. The number in parenthesis is the insertion length. 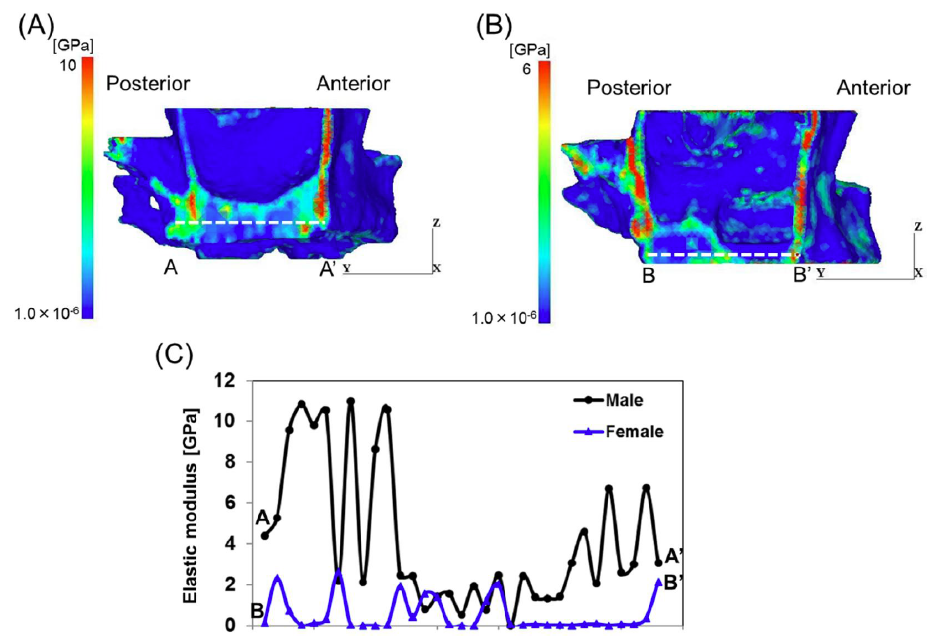 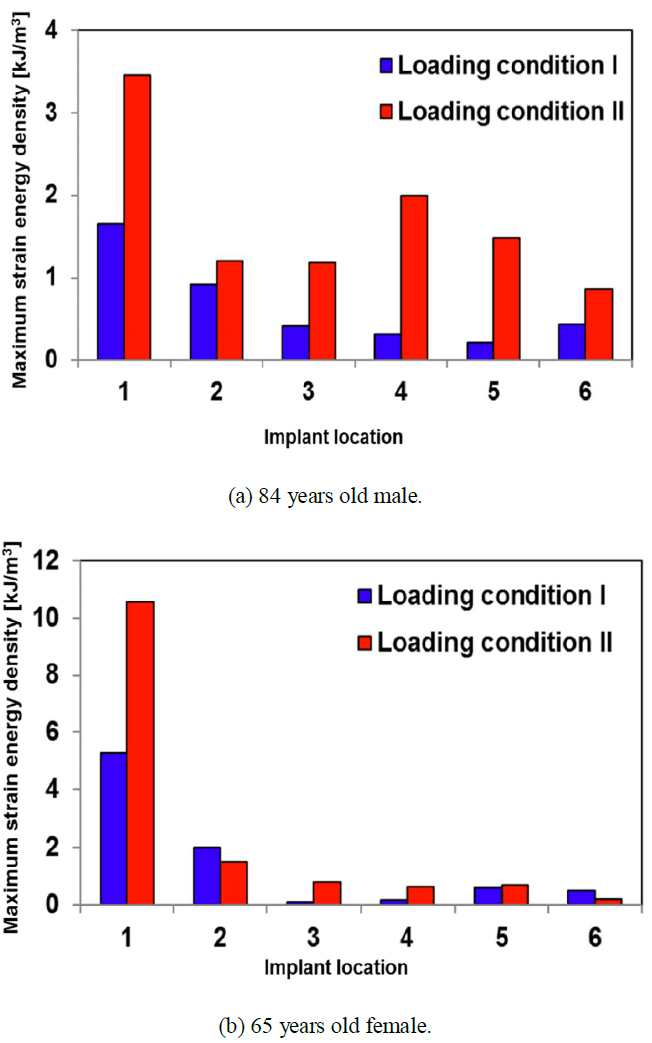 Figure 5: Comparison of maximum strain energy density in the vicinity of implants. 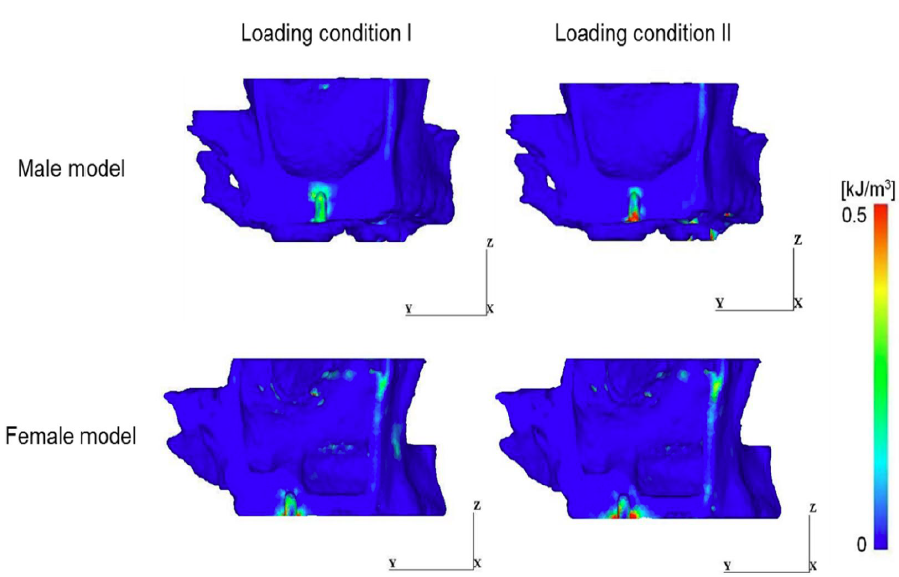 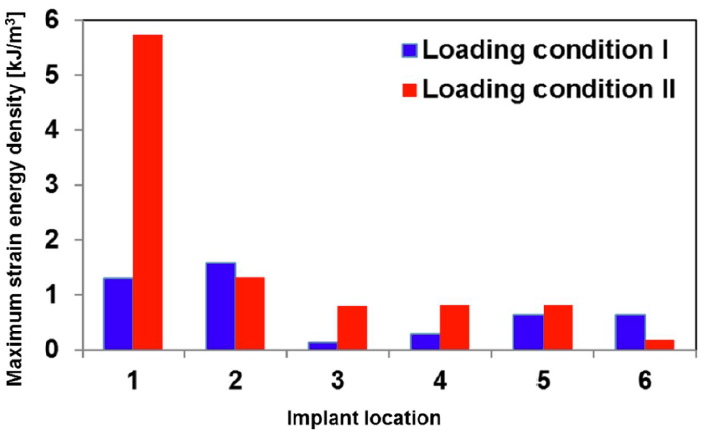 Figure 7: Maximum strain energy density in the vicinity of implants of modified model. 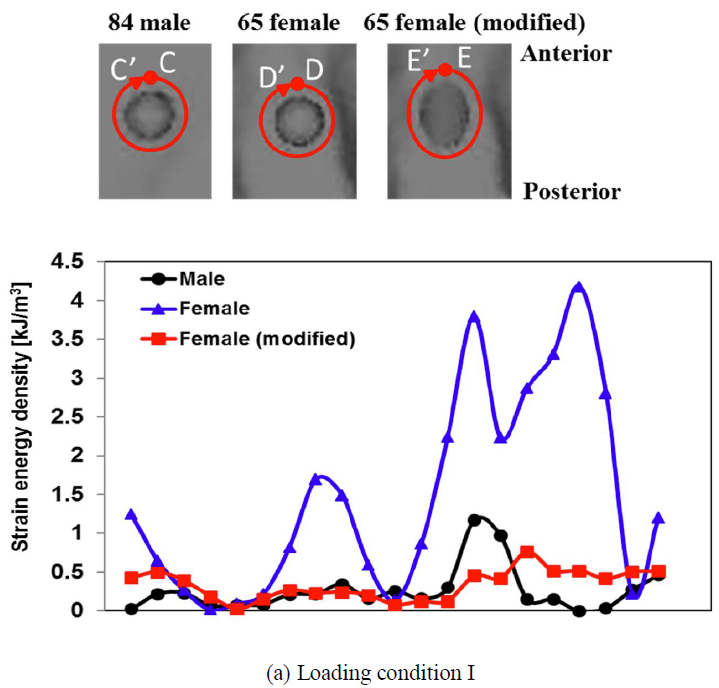 Figure 8: : Distribution patterns of strain energy density along the lines around the implant ①.

In actual medical treatments, threshold level of strain energy density could be very useful in order to predict the risk assessment for bone absorption using the computational analysis during the preoperative planning. Further study needs to be done to find such threshold level and establish the computer aided preoperative procedure.

Three-dimensional finite element models of edentulous maxillas of a male and female patient were developed using their CT-images. For each model, a prosthesis model, including six-implants and a curved support was attached to the maxilla. Finite element analysis was then performed to assess the effects of the implantation on the concentration of the strain energy density that has been considered to be a macroscopic parameter controlling bone absorption around the implants. The conclusions are summarized as follows:

This research did not receive any specific grant from funding agencies in the public, commercial, or not-for-profit sectors.

"Fortune Journals" offers reward program, under this each NIH funded article will rewarded with some amount. Hereby we are requesting all the NIH grant holders to submit their articles in Dental Research and Oral Health.