Introduction: Leptomeningeal dissemination of hemangioblastomas (HB) of the central nervous system (CNS) is very rare. Few studies have reported leptomeningeal involvement in sporadic HB or in HB associated with von Hippel-Lindau (VHL) syndrome. Due to the rarity, no standard of care exists yet.

Materials and Methods: A case report is described including clinical, radiological and therapeutic details. From the disease onset, the follow-up continued till death.

Results: An adult man developed leptomeningeal dissemination of non-VHL HB starting from original cerebellar site. The initial lesion was removed by surgery; however 10 years later multiple supra- and subtentorial tumoral nodules showed up. Combined treatments with surgery and radiotherapy and radiosurgery were used. After short-term stability, HB progressed to spinal cord and dissemination pattern took advance. Contextually he developed neurological deterioration and polycythemia. Thus, we decided to propose to the patient the use of bevacizumab (BEV), a humanized monoclonal antibody targeting vascular endothelial growth factor (VEGF): the patient experienced 1-year stable disease, with early clinical improvement. After 5 years from the diagnosis of dissemination the patient died due to disease progression.

Discussion: Leptomeningeal dissemination of HB is extremely rare within the setting of non-VHL. Based on hypervascularized biology of HB, BEV could hypothetically represent a therapeutic option. We describe an adult sporadic HB with CNS dissemination, showing a temporary stabilization of disease during BEV, improving the secondary polycythemia and exhibiting no adverse effects. Such treatment should be considered in this setting of such patient.

Hemangioblastomas (HB) are uncommon, benign neoplasms [Health Organization World (WHO) grade I] of the central nervous system (CNS) that may appear either sporadically or as a part of von Hippel-Lindau (VHL) disease, along with a variety of benign and malignant tumors. HB account for approximately 1-2% of the intracranial neoplasms and 2-10% of the primary spinal cord neoplasms. These highly vascularized tumors are most commonly located in the cerebellum (45%-50%), followed by the spinal cord (40-45%) and brain stem (5-10%) [1].

HB frequently affect adults with a median age of 40 years at diagnosis, and VHL-associated HB usually occur earlier than sporadic cases (ages 30-40 versus 40-50 years, respectively) [2]. Sporadic HB lesions are often solitary and account for 70% of cases, while in 30% of patients they are manifestations of VHL disease and are more likely multifocal. Other common features of the autosomal dominant disorder VHL include retinal HB, clear cell renal cell carcinoma, renal and pancreatic cysts, and pheochromocytoma. Manifestations of VHL disease develop if the VHL tumor suppressor gene on chromosome band 3p25 is subject to inactivation. In addition, somatic mutations of VHL are involved in the development of a proportion of sporadic HB [3]. Loss of wild type VHL protein may lead to the accumulation of hypoxia-inducible factor (HIF)1α protein due to impaired ubiquitin-mediated degradation of HIF1α and subsequently results in the upregulation of hypoxia-inducible genes, including vascular endothelial growth factor (VEGF), platelet-derived growth factor (PDGF) and erythropoietin [4]. The first-line treatment for solitary HB is total resection as they are generally considered to be curable, non-metastasizing tumors because of their low relapse rate. However, relapse might occur, and second surgery or radiotherapy (RT) are optionable. Very rarely the progression is spreading to the leptomeningeal site as dissemination, and for such stage no standard of therapy is recommended.

Data pertaining to patient demographics, clinical presentation, blood exams, imaging and treatment strategies were described. Imaging included brain Computed Tomography (CT, not shown) and cranio-spinal 1.5T Magnetic Resonance Imaging (MRI), comprehensive of T1 (with and without contrast medium) and T2 weighted images (w.i.). HB show as nodular contrast enhancing lesions in T1 w.i. sequences after administration of gadolinium. Dissemination can be detected either as distant T1 enhancing lesions or as meningeal or ependymal slight enhancement. Myelopathy can be observed in T2 w.i. as focal or diffuse hyperintensity. Recurrence is defined as the emergence of radiologically new nodular lesions. VHL was assessed based on genetic analyses of germline DNA and with the evaluation of established clinical diagnostic criteria (one or more VHL-associated tumors with a family history of VHL or two or more VHL-associated tumors without a family history of VHL).

A 39-year-old man presented with headache and instability. Brain CT and MRI showed an intraparenchymal mass located in the left cerebellar hemisphere, suggestive of HB. He underwent to gross total resection, gaining histological diagnosis of HB (time 0). No additional neurological deficits occurred and the following periodic brain MRI were stable for 10 years (time 10), when multifocal brain recurrence showed up at cerebellar site, as well as supratentorial (left polar-temporal site, sellar and petroclival site): the patient was re-operated to remove cerebellar lesion, followed by adjuvant therapy based on cranio-spinal radiotherapy (RT) combined to Gamma Knife radiosurgery at supratentorial localizations. After 15 years from first diagnosis (time 15) cranio-spinal MRI demonstrated another cerebellar lesion and a new spinal main localization at L3 level, with some satellite nodules, confirming the disseminated evolution. He underwent to Gamma Knife and surgery to treat cerebellar and lumbar localization respectively.

One year later (time 16) cranio-spinal MRI showed a new nodular thoracic (Th4-Th5 level) lesion, and the patient underwent to nodule removal. After 17 years (time 17) from first diagnosis radiological brain and spinal MRI showed progression of the multiple spinal localizations, including a new large localization at Th10 site, within a pattern of extensive leptomeningeal dissemination and evidence of new bulbar-cervical lesion. The other brain lesions at left temporal lobe and cerebellum were stable (Figure 1A, 2A). 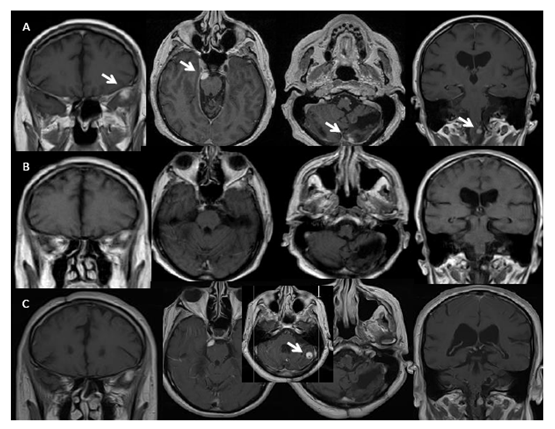 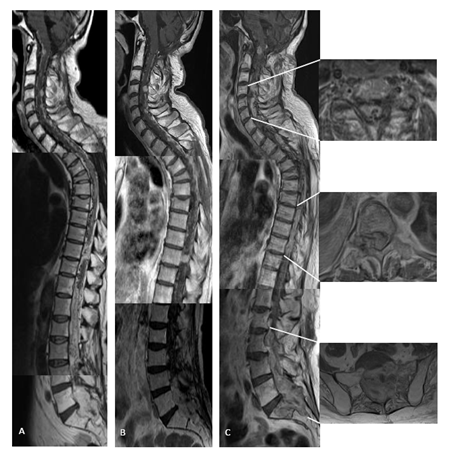 Investigations for VHL disease (including chest-abdomen and pelvis CT-scan, fundus oculi examination and urinary catecholamine dosage) and search for the VHL germline mutations were all negative. No familiar history of VHL was known.

Contextually secondary polycythemia was detected at laboratory exams (increase of hematocrit value as well as hemoglobin level, associated with elevated erythropoietin (EPO) level (50 mU/mL). Polycythemia vera was excluded due to the absence of JAK2V617F mutation.

Based to clinical-radiological worsening, he first underwent surgery for thoracic Th5-Th6 lesions removal due to the secondary spinal cord compression.

Three months later (time 17 and 3 months) intravenous BEV (10 mg/kg/die, q2w) treatment was started. Upon initiation of BEV treatment, the patient initially experienced improvement in postural passages and general performance status. The formerly progressive lesions showed slight dimensional T1 contrast enhancing reduction at brain site and partial response at thoraco-lumbar and sacral level after 3 months (time 17 and 6 months) of treatment (Figure 1B and 2B). Consecutive cranio-spinal MRI were stable for one year of treatment (time 18 and 3 months), when other new lesions showed up at left cerebellar hemisphere (Figure 1C), and no change at spine, including the focal myelopathy (Figure 3A). Spinal lesions enlarged with associated extensive myelopathy at further follow-up (time 18 and 9 months) (Figure 2C, 3C). 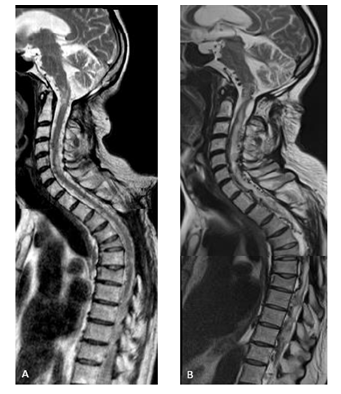 No BEV-related adverse effects appeared. The patient gradually deteriorated, with severe limitation in the transfers: thus, he preferred not to cope any other adjuvant therapy except for supportive therapy based on pain killer, low molecular weight heparin as deep venous thrombosis prophylaxis and calcium.

After 20 years from first HB diagnosis and five from first signs of dissemination (time 20) the patient died due to disease progression.

Our case was diagnosed within the common range of HB age onset and, as the most of the disseminated cases, onset lesion originally occurred at cerebellum site in present case also [1]. Based on the literature data, the latent period from the onset of primary HB to dissemination ranged from 7 months to 30 years (mean: 89.8 months). The mean survival after the diagnosis of dissemination ranged from 2 to 79 months (mean: 28.6 months), including only 2 cases that lived 5 years or longer after dissemination diagnosis [5-7].

In present case, dissemination was detected after 15 years of disease and the patient survived further five years thereafter.

Some groups focused on prognostic factors, with the limitation of retrospective analysis and lacking of extensive data [1, 2]. Solid tumoral component, brainstem localization and VHL-relation have been described as negative prognostic factors by Wang et al. [2]. Based on data from the Surveillance, Epidemiology, and End Results (SEER) Program (including VHL-related and not HB), age at diagnosis ≥60 year-old, African American race, brainstem and cerebrum tumor location, multiple tumors, and no prior surgery are significantly associated with decreased overall survival. No dissemination pattern was addressed. Gender, marital status, tumor size, the extent of tumor resection, and prior RT did not demonstrate significant associations with overall survival [1]. Our case presented multiple localizations with solid tumoral component as negative prognostic factor. Besides, nomograms have been proposed for predicting survival at 3 and 5 with good predictive accuracy; based on these, our case exhibits 5-years-survival prediction 0.94 (09-0.98) [1].

Most CNS HB can be safely resected, and gross total resection offers definitive therapy. RT is also an option, especially for patients with residual, recurrent, or surgically inaccessible lesions [1]. Based on the highly vascularization of HB, surrounded by a capillary network, composed of endothelial cells expressing VEGF receptor and associated to the production of VEGF and basic fibroblast growth factor (bFGF), anti-angiogenic agents, particularly multitarget tyrosine kinase (TK) inhibitors (TKI, as semaxanib, sunitinib, vatalanib), or biological response modifiers (as thalidomide, IFN α-2a, HIF2α inhibitors, octreotide) are currently the most widely studied strategies to prolong disease stability in VHL disease, but most therapies targeting TK and VEGF pathways have failed to demonstrate tumor control and could cause collateral effect [9, 10]. Data about anti-angiogenic use in sporadic HB are limited, and even anecdotal in disseminated non-VHL HB due to their rarity. One report described the use of sunitinib in disseminated non-VHL HB with short-term response [11]. There are a few case reports that have utilized BEV therapy for single and multiple HB not amenable to surgical resection [12-15], including only two cases of disseminated disease [13]: the former got only one BEV infusion, followed by rapid deterioration and death [11], the second was treated longer but the survival was not reported [13].

We describe a HB case that, starting from single cerebellar lesion, gradually progressed to multifocal and then disseminated pattern: he was consecutively subjected to multiple combined therapies till the use of BEV that induced 1 year-stabilization of the disseminated disease after initial partial response concerning neurological performance, polycythemia evolution and imaging. In addition BEV exhibited good safety profile.

The present clinical case highlights how inhibition of VEGF, through the use of BEV, can provide long-term clinical and radiographic improvement of disseminated HB become refractory to surgical and RT and radiosurgical interventions. Moreover, BEV may have a multifaceted role: its inhibition of VEGF pathway can reflect not only on HB growth, but also on secondary EPO-mediated polycythemia and on RT effect, either potentiating treatment-tumour responses or reducing radio-induced inflammatory changes which can contribute to further mass effect impacting on clinic [16, 17].

Limitations of the present report are related to the lack of peripheral response markers investigation, contrary to what proposed during BEV approach for other tumors [18] or during other systemic therapy for HB, as serum levels of the HIF-dependent proteins VEGF, VEGFR-2, VEGFR-3 or miRNA210 or CA9 [10].

Besides, very recently, genetic and epigenetic alterations bearing sporadic CNS HB tumorigenesis have been addressed by genome sequencing [3, 7, 19]: this could be the bases for next personalized therapy in a setting of disease that still results fatal.

We would like to thank the patient, his family and the health team members for their dedications.