We examined the various effects of lactic acid bacteria (LAB) and yeast on sourdough bread and aimed at the development of a new sourdough bread using wild yeast isolated from fruit and LAB isolated from a traditional Japanese fermented fish (funa-sushi). We made sourdough by using Lactobacillus paracasei NFRI 7415 and baker’s yeast isolated from fruit. Fermentation tests of four types of sourdough were carried out for 4 days: LAB+yeast (28°C), LAB (28°C), LAB and yeast (8°C) and LAB (8°C). The CO2 production and the organic acid and free amino acid contents of the sourdough from LAB and yeast fermented at 28°C were higher than those of the other sourdough. These results indicate that for the new sourdough, the most suitable fermentation period is 3 days and the most suitable temperature is 28°C. Our findings demonstrate that it is possible to develop new sourdough bread using sourdough by the co-fermentation of LAB and wild yeast.

Sourdough bread is widely consumed in regions such as northern Europe and U.S. It is characterized by its unique flavor and sourness, which depend on the sourdough used to make the bread. Sourdough is rich in organic acids produced by lactic acid bacteria (LAB), and LAB and yeast are concentrated in the sour dough [1, 2]. Because the protease activity of LAB is high, sourdough bread contains abundant peptides and amino acids [3, 4]. The organic acids produced by LAB help to improve the preservability of bread by preventing the growth of Bacillus spp. [1]. Lactobacillus brevis, L. plantarum and L. fermentum?were discovered from several sourdoughs [5]. Saccharomyces exiguous, Candida milleri and Candida humilis have been identified from spontaneously fermented sourdough [1, 6, 7]. Lactobacillus paracasei NFRI 7415 has been confirmed to be an LAB isolated from a traditional Japanese fermented fish called funa-sushi, and the pH sharply decreases with the growth of the cells [8, 9]. A large amount of organic acid (such as lactic acid) could thus be expected to be produced in the fermentation process by the addition of strain NFRI 7415 to dough. Some baker’s yeasts (Saccharomyces cerevisiae) isolated in our laboratory have some strains with excellent fermentation properties and can be used for bread making [10, 11]. In this study, we focused on various effects of LAB and yeast on sourdough bread. We attempted to develop a new sourdough bread using wild yeast isolated from fruit and LAB isolated from funa-sushi. The wild yeast used for the experiment was selected from S. cerevisiae isolated from fruits and soil, and this yeast was significantly preferred in sensory testing. The sourdough was fermented with LAB and yeast under 28°C and under 8°C. We carried out the fermentation for 4 days to investigate the amount of CO2 produced and the changes in the contents of organic acid and free amino acid with time. We chose conditions with high fermentation power from four different sourdoughs and created sourdough bread as a starter.

2.2 Preparation of the LAB and yeast

We prepared the sourdough according to the method described by Ohnishi et al. [13]. The following ingredients of sourdough were mixed: 20 g of flour, 10 g of rye flour, 15 g of water, 1.8 g of LAB, and 1.2 g of yeast collected as described above in section 2.2. We then conducted 4-day-long fermentation tests of four types of sourdough: LAB and yeast at 28°C ‘LAB+y28’, alone at 28°C ‘LAB28’, LAB+ yeast at 8°C ‘LAB+y8’and LAB alone at 8°C ‘LAB8’ for 4 days were carried out. Four samples of each type of sourdough were then place together in a bowl and covered a wet dishcloth. One gram was taken from each sample every day and suspended with 10 mL of sterilized water. The number of bacteria and the pH were then measured. The amount of CO2 produced during the fermentation was determined from the weight of the sourdough which started fermentation and the weight of the sourdough after fermentation.

2.4 Determination of organic acids and free amino acids in the sourdough

A part of each sourdough type was sampled every 24 h during the fermentation period, then freeze-dried, powdered and subjected to the quantification of organic acid and free amino acid as described. For the organic acid analysis, a 1-g sample was extracted with 10 mL of 70% ethanol at 50°C for 30 min and centrifuged at 3,000 rpm for 10 min. The residue was further extracted two more times, and all of the extracts were combined and evaporated by rotary vacuum evaporation. The concentrates were diluted to 3 mmol/L of perchloric acid solution and filtered through a 0.45 µm syringe filter (Millipore, Milford, MA). The organic acid in the four sourdoughs quantified by high-performance liquid chromatography (HPLC) (UV L-7405, Hitachi). The samples were applied to a GL-C610H-S column (300 mm × 7.8 mm; flow rate, 0.5 ml/min; oven temperature, 60°C; injection volume, 20 µl; Hitachi Chemical, Tokyo), and UV absorbance was measured at 440 nm. Citric acid, tartaric acid, malic acid, succinic acid, lactic acid, acetic acid, propionic acid, isobutyric acid and n-butyric acid were used as a standard solution. The concentration of organic acids in the sourdough was calculated by the absolute calibration curve method.

For the free amino acid analysis, a 0.5 g sample was extracted with 20 mL of 70% ethanol at 50°C for 30 min, and centrifuged at 3,000 rpm for 10 min. The residue was further extracted two more times, and all of the extracts were combined and evaporated by rotary vacuum evaporation. The concentrates were diluted to 25 mL of lithium citrate buffer (pH2.2) and filtered through a 0.45 µm syringe filter (Millipore). The free amino acids in four sourdoughs were analyzed by an amino acid automatic analyzer (L-8800, HITACHI). Thirty-one types of free amino acids including 11 types of non-proteinogenic amino acids were used as a standard solution.

2.5 Preparation of the sourdough bread 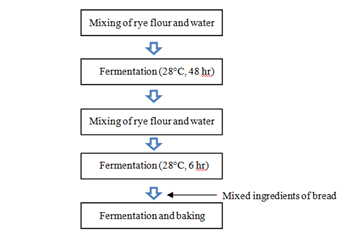 3.1 Characteristics of the fermentation of sourdough

Table 1: The number of Lb. paracasei NFRI 7415 in sourdough during fermentation (cfu/g).

Table 2: The number of wild yeasts (10-2) in sourdough during fermentation (cfu/g). 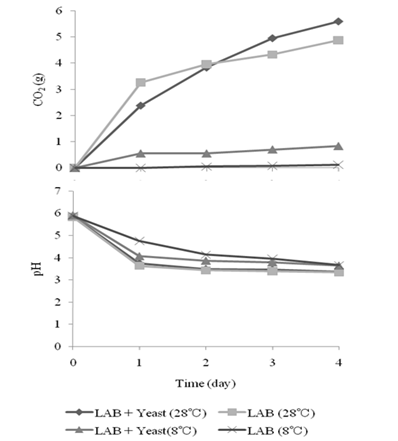 Figure 2: Changes in CO2 production and pH in sourdough during fermentation. 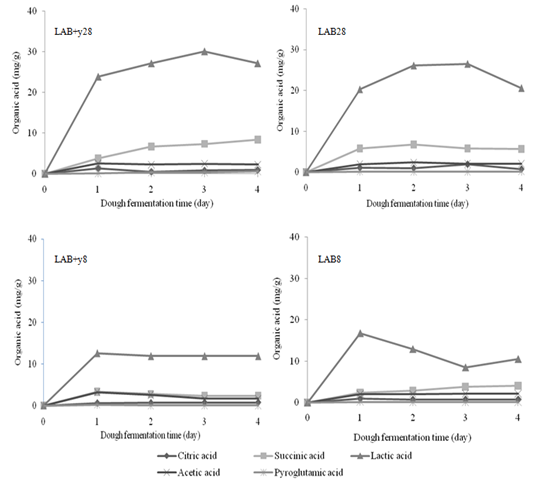 Figure 3: Changes of organic acid contents in sourdough during fermentation.

The CO2 productions of the sourdoughs fermented at 28°C (LAB+y28 and LAB28) were greatly than those of the sourdoughs fermented at 8°C (LAB+y8 and LAB8). Compared to the LAB+y28 and LAB28 sourdoughs, the CO2 production in the LAB+y28 sourdough was higher than that of the LAB28 sourdough. We speculate that the CO2 production in the sourdough was increased at the same time that the sourdouhs’ pH decreased. In the fermentation test in the YM medium at 30°C of only the wild yeast (10-2) isolated from apple leaves, the pH of the YM medium at 4 days remained around 3.5 [11]. In the same experiment in another study using YM medium, the number of yeasts was also 108-109 cfu/mL [10], which is in almost complete agreement with the number of yeasts in the present study’s sourdough. Our results thus suggest that LAB and yeast coexist without inhibiting the growth of the other. As the pH of the LAB+y28 sourdough decreased to pH 3.3 (Figure 1), we inferred that LAB produced a large amount of organic acid. Because the numbers of LAB and yeasts in the LAB+y28 sourdough (A) were decreased after 3 days, we conclude that the most suitable temperature and fermentation period for the sourdough are 28°C and 2-3 days.

Rye flour used for sour bread does not form gluten like flour; the lactic acid produced by the fermentation of sourdough swells protein and gives extensibility [1, 2]. It was reported that LAB was necessary for making bread when using rye flour [1]. The amount of lactic acid in rye sourdough (10°C, 40 h fermentation) using Lactobacillus sakei and beer yeast S. serevisiae separated from sake was 815 mg/100g [4]. In the present study, the lactic acid production in the sourdough at 8°C (LAB+y8) on day 2 was 11.9 mg/g (1,190 mg/100 g). Lb paracasei NFRI 7415 showed high lactic acid-producing ability.

After the fermentation of the four types of sourdough, the total free amino acids of the LAB+y28 and LAB28 sourdoughs were approximately twice those of the LAB+y8 and LAB8 sourdoughs (Tables 3 and 4). The free amino acids affect breads’ aroma and taste. L-glutamic acid is involved in umami (savory taste) and glycine and alanine are involved in sweetness [15, 16]. In the sourdoughs fermented herein at 28°C (LAB+y28 and LAB28), the alanine and glutamic acid levels were increased by fermentation, which we suspect improves the taste and flavor of sourdough bread.

In summary, Lb. paracasei NFRI 7415 produced the free amino acids and lactic acid at high concentrations in sourdough due to coexistence with S. cerevisiae (10-2). Our results demonstrate that it is possible to develop new sour bread using sourdough by a co-fermentation of LAB and wild yeast.

Four types of sourdough was prepared using Lb. paracasei NFRI 7415 and S. cerevisiae (10-2) isolated in our laboratory, and 4-day fermentation tests were carried out. Based on the resulting CO2 production and organic acid and free amino acid contents, we determined that the most suitable temperature and fermentation period for the sourdough and temperature are 28°C and 3 days.

This study was supported by The Public Foundation of Elizabeth Arnold-Fuji (2015- 2016).

The authors declare that they have no conflict of interests.