Background: In some of the inflammatory disorders, such as chronic rhinosinusitis (CRS), non-allergic rhinitis (NAR), or allergic rhinitis (AR), environmental agents can incite or exacerbate the symptoms of each disease. The aim of the study was to investigate the relationship of chemical intolerance in the nasal inflammatory disorders using QEESI©.

Methods and Findings: Subjects were 261 outpatients who presented themselves for rhinologic evaluation. Subjects completed the QEESI© (Korean version) during the first visit. The prevalence rate of the very suggestive scores in all the rhinologic disease cases overall and CRS, NAR, and AR cases was examined and compared between each disease group. We compared the chief complaint and ARIA classification of AR with the degree of suggestive chemical intolerance. Of 261 patients, 45 patients (17.24%) were categorized into very suggestive of risk of chemical intolerance. The prevalence rate of very suggestive was higher in female (16.33%) than in male (9.82%). Among the CRS, NAR and AR groups, the number of very suggestive cases were 17 (18.47%), 4 (15.38%), and 11 (13.25) respectively and a statistical difference was not observed between each group (P>.05). When we compared the chief complaint according to the degree of severity, rhinorrhea and nasal obstruction was the chief complaint in the cases of very suggestive scores.

Human nasal mucosa scrub particulate and water soluble volatile compounds from inhaled air, protect airways from injury caused by inhaled allergens, irritants, bacteria, and viruses and humidify and warm the inspired air. Processes to control the inhaled air are under strict physiological control and depend on local mucosal feedback and sensory and autonomic reflexes [1]. Common chemical sense in the nasal cavity is a nasal sensation provoked by airborne chemicals which are distinct from taste and smell. This sense results from the exposure of trigeminal nerve endings to irritants. Several protein receptors on cell membranes are the activation site for chemical irritants. Neurogenic inflammation is a well defined process by which inflammation is triggered by the nervous system. Sensory nerves act as both afferent and efferent nerves for neurogenic inflammation. A variety of chemical irritants trigger the nervous system, induce the release of neuropeptides, such as substance P, neurokinin A and then produce vasodilatation, edema, and other manifestations of inflammation, known as neurogenic inflammation [2, 3]. Chemical intolerance is the subjective report of feeling ill from low-level exposure to a variety of common outdoor and indoor odorants, such as auto emissions, pesticides, carpet glue, drying paint, and perfume [4].

Multiple chemical sensitivity (MCS) is an acquired disorder that develops after some identifiable environmental exposure and a kind of chemical intolerance [5, 6]. MCS can be referred to in many ways such as Idiopathic Environmental Intolerance, Chemical sensitivity or Intolerance and Toxicant-induced loss of tolerance [4]. To screen for MCS, several questionnaires have been developed. However, the majority of instruments for testing are very cursory and there is a lack of a uniform approach [4, 7, 8]. A tool that could gauge the multi-system symptoms and multiple intolerances reported by these patients with good validity and reliability would be useful for research. The Quick Environmental Exposure and Sensitivity Inventory (QEESI©) is a questionnaire, which was developed by Miller and Prihoda, for the screening of MCS [9, 10. Chemical intolerance such as MCS may be associated with many diseases such as rhinosinusitis, polyps, allergic rhinitis, recurrent otitis media and other ENT problems [11-13]. However, there was not investigated chemical intolerance in nasal inflammatory disorders using QEESI©.

The aim of the study was to investigate the relationship of chemical intolerance in the nasal inflammatory disorders using QEESI©.

Subjects were outpatients who presented themselves for rhinologic evaluation at Dong-A university medical center between January, 2012 and December, 2012. The subjects were 261 patients (163 males, 98 females) and the mean age was 40.66 ± 14.12. Nasal inflammatory disorders were classified into chronic rhinosinusitis (CRS), Non-allergic rhinitis (NAR) and allergic rhinitis (AR). There were 92 CRS (54 males, 38 females), 26 NAR (13 males, 13 females), and 83 AR (57 males, 26 females) patients. A control group was selected from among patients without rhinologic disease and 98 were enrolled.

Most subjects were stratified into 3 groups based on whether they had CRS, NAR or AR. The CRS cases were evaluated with symptoms, endoscopic findings, or a PNS CT and diagnosed based on the minimal criteria for CRS [14]. NAR and AR were diagnosed with symptoms including chief complaints, endoscopic findings and the results of multiple allergen simultaneous test (MAST) using MAST CLA Allergy test (Hitachi Chemical Diagnostics, Inc, CA, USA). AR patients were classified into 4 groups using the ARIA classification [15].

Subjects completed the QEESI© (Korean version) during the first visit. The degree to which MCS is suggested is classified in 4 degrees - very suggestive, somewhat suggestive, problematic and not suggestive - using 2 categories (chemical intolerance and symptom severity) (Table 1). We examined the prevalence rate of the very suggestive scores in all the rhinologic disease cases overall and CRS, NAR, and AR cases and compared between each disease group. Comparisons were also performed separately for male and female patients.

We calculated the average of the 50 items on five scales. On each scale, We compared the highest total score and the five highest scores in 10 items among males and females and for each of the 3 disease groups.

We obtained the informed consent from each patient and the study was approved by the institutional review board of Dong-a University hospital in Busan, Korea. 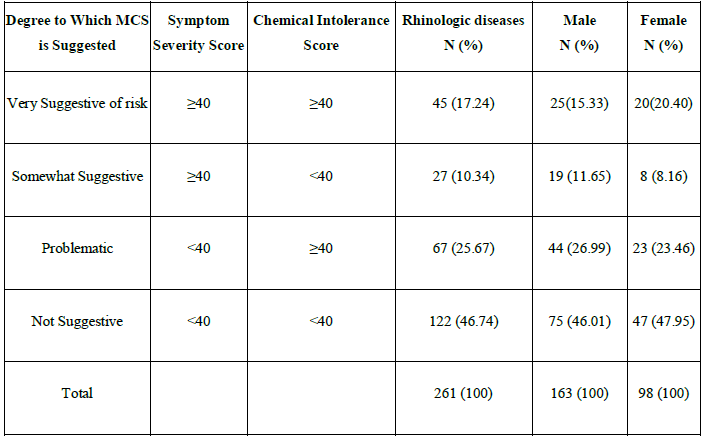 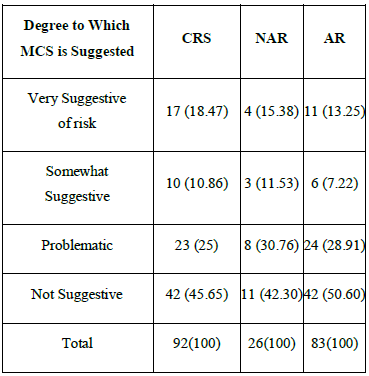 Table 2: Prevalence rates of chemical intolerance at each disease group

The five highest scores among the total patients on the survey in this area were in the following categories: tobacco smoke

*p<0.05 as compare between male and female

Table 3: Mean scores of each scale among males and females

Table 4: Mean scores of each scale in 3 groups 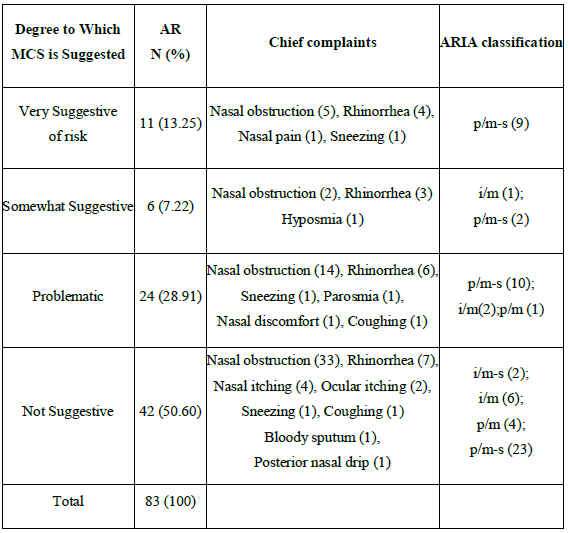 Table 5: Chief complaints and ARIA classification according to the degree of the suggestive MCS in allergic rhinitis patients

The five highest results among the total patients on the questionnaire in this area were in this order: caffeine >scented fabric softener >alcohol >insecticides >scented personal care products. The mean score of those with caffeine sensitivity was 0.83 ± 0.38 (Table 4). The scores for tobacco, alcohol showed significantly higher in males than females and those for scented personal care products, second-hand smoke and scented fabric softener showed significantly higher in females than males (P<.05). The highest score among the 10 items in all 3 groups was for caffeine. But a statistical difference among disease groups was not observed (P>0.05) (Table 4).

3.6 Analysis of AR characteristics with the degree of suggestive chemical intolerance

The subjects were 83 patients (57 males, 26 females) and the mean age was 36.4 ± 14.4. The most common complaint symptoms were nasal obstructions and the next most common was rhinorrhea. According to the ARIA classification, the most common class was persistent/moderate severe. The result of the MAST was that house dust mites were the most common allergen.

Of 83 patients, 11 patients (13.25%) were categorized into the very suggestive of risk classification and a statistical difference between the male and female very suggestive cases was not observed (P>.05).

When we compared the chief complaint according to the degree, in the cases of very suggestive scores, rhinorrhea occurred as much as nasal obstructions. In the very suggestive cases, all have the persistent/moderate-severe classification (Table 5).

Miller and Prihoda developed the QEESI© to assist researchers and clinicians in evaluating patients and populations for MCS [9, 10]. They reported that 7% cases in the control group were very suggestive and a higher percentile in the specific groups. Hojo et al., investigated MCS using QEESI© in a Japanese population and reported that about 4% of the general population could be classified at the very suggestive level [16-18]. The prevalence rate of the very suggestive cases in this study was 17.24% and higher than in the control groups or general populations of other studies. We suggest that it may be concerned environmental or genetic factors.

Many studies reported that the prevalence rate of MCS among middle-aged females was higher than among males [19-22]. Female predominance may be attributed to female vulnerability or more frequent exposure to the chemical irritants. The result of this study are consistent with those of previous studies, which showed that the prevalence rate of very suggestive was 16.33% in female and 9.82% in male. Many researchers have reported that various sickness and diseases, including migraine, fibromyalgia, asthma and sinusitis were associated with MCS [22-25]. Meggs and Cleveland performed a rhinolaryngoscopic examination of 10 patients with MCS [12]. They suggested that exposure to chemical irritants can induce chemical sensitivity, especially with chemical irritants that induce asthma and/or rhinitis, but the mechanisms by which individuals become sensitive to multiple diverse chemicals, part of the diagnostic criteria for MCS, are not clear. Baldwin suggested that chemical intolerance may serve to amplify these traditional immune-related disorders and/or suggests that having asthma or hay fever could make one more vulnerable to chemical intolerance [13]. We hypothesized that the nasal inflammatory disorders, such as CRS, AR, or NAR may be associated with chemical intolerance and used the QEESI© to evaluate the prevalence rate of chemical intolerance in the nasal inflammatory disorders. In this study, the prevalence rate of very suggestive cases in CRS, AR and NAR was 18.47%, 15.38% and 13.25% respectively. We suggest that nasal inflammatory disorders may be associated with the chemical intolerance.

MCS and respiratory disorders, especially asthma or AR, can be closely related and many nonspecific environmental agents can trigger the symptoms of those disorders [13, 26]. We examined the chief complaints and classified the patients into 4 groups by ARIA classification [15] and compared the chief complaints and ARIA classification of AR with the degree of suggestive MCS. The chief complaint in the AR cases was nasal obstruction, but in very suggestive cases, rhinorrhea occurred as much as nasal obstruction. In the very suggestive cases, all cases were classified into the persistent/ moderate-severe classification. The reason is not clear, but it may be that patients with more severe symptoms visit the

hospital more or environmental factors may aggravate the symptoms.

This work was supported by the Dong-A University research fund.

This study was performed after permission from Dr. Claudia S. Miller [University of Texas Health Science Center at San Antonio],Copyright holder of QEESI©

The authors have no potential conflicts of interest to disclose.

The present study protocol was reviewed and approved by the institutional review board of Dong-A University College of Medicine (Reg. No. 11-157). Informed consent was submitted by all subjects when they were enrolled.