Background: Methadone is now increasingly being used to control opioid withdrawal symptoms, and recently, chronic pain. With increasing reports of cardiac problems induced by methadone, we aimed to determine effect of methadone on hERG expression after chronic treatment with racemic and the two enantiomers (S- and R-) of methadone. The molecular mechanism underlying methadone-disrupted hERG expression in human primary cardiomyocytes was also investigated.

Methadone was first introduced by the United States Public Health Service Hospital in the 1960s as a treatment for opioid abstinence syndrome, and still remains the most widely prescribed and most efficacious treatment for this condition [1]. More recently, methadone is used in palliative care to control chronic cancer pain [2]. Due to its low production cost, fast-acting and long-lasting effect, methadone usage is steadily increasing [3]. The drug is currently administered as a racemic form, composed of a mixture of (R)- and (S)-enantiomers, although (R)-methadone is reported to be primarily responsible for its therapeutic benefit, as racemic-methadone produces a similar therapeutic outcome [4]. (S)-methadone is primarily responsible for off-target, adverse effects [5].

There has been a significant increase in cases of QT interval prolongation and torsade des pointes (TdP) associated with a wide range of methadone dosages, including those recommended for methadone maintenance treatment and palliative care [7-9]. With growing concern that chronic methadone treatment can lead to future health problems and major complications, the effect of methadone on hERG needs to be determined.

Many previous in vitro studies examining drug effects on hERG have used the patch-clamp method to determine acute effects in a hERG-expressing heterologous system e.g., HEK293-hERG [12, 15]. However, for some drugs, hERG blockade may not be detected at the acute treatment stage, but may still affect hERG expression at clinically relevant concentrations. Example of these include arsenic trioxide (anti-cancer), pentamidine (anti-infective/microbial), probucol (cholesterol-lowering drug), and digitoxin (cardiac glycoside), which have all been retracted from the market due to their effect on reducing hERG expression [17-20]. Others such as ketoconazole (anti-fungal) and fluoxetine (anti-depressant) acutely block hERG currents and simultaneously disrupt its expression [21, 22]. Notably, growing evidence highlights that defective hERG expression also leads to QT interval prolongation with increased predisposition to cardiac arrhythmias, TdP, and sudden cardiac arrest [23, 24].

All of these observations on drug-induced alterations in hERG expression are similar to biogenesis defects implicated in the vast majority of examples of hERG mutation-mediated QT prolongation [25]. Serum and glucocorticoid inducible kinase-3 (SGK3) and the 90-kDa heat shock protein (Hsp90) regulate cardiac hERG expression and may be involved in hERG biogenesis defects [26, 27]. Previously, SGK3 and hERG coexpression in Xenopus oocytes was shown to enhance steady-state currents and cell membrane protein abundance [27]. Hsp90 is an abundant molecular chaperone intimately involved in protein folding, activation, and stabilization [28]. Hsp90 inhibitors e.g., geldanamycin, disrupt the Hsp90-ATPase cycle and suppress hERG protein maturation, facilitating its degradation via the ubiquitin-proteasome system [29].

In this study, we investigated the effect of chronic treatment of racemic- and the two (S- and R-) methadone enantiomers on hERG gene and protein expression in a native cardiomyocyte model system. We also examined SGK3 and Hsp90 mechanisms in methadone disruption of hERG expression.

Three types of methadone were used throughout the study: racemic-, (R)- and (S)- methadone (Toronto Research Chemicals, Toronto, Ontario, Canada). For each type, a single concentration was used, based on published patch-clamp data [12], and corresponding to the IC50 (i.e., concentration that blocks 50% of hERG currents): 3, 2, and 7 µM, respectively. Stock concentrations (1 mM) were prepared in distilled water and stored at ?20°C until needed.

Data are presented as mean ± standard error of the mean (SEM) with n = 3. Statistical significance was determined using Student’s t-tests.

After 5 days of treatment with IC50 racemic-, (R)- and (S)- methadone, relative real-time PCR was performed to measure hERG gene expression. The CT values for each sample were normalized to the CT value of ?-actin, as a reference gene. Relative hERG mRNA expression was significantly reduced by racemic- and (S)-methadone after 5 days of treatment (P < 0.05), but was not significantly affected by (R)-methadone (Figure 1). 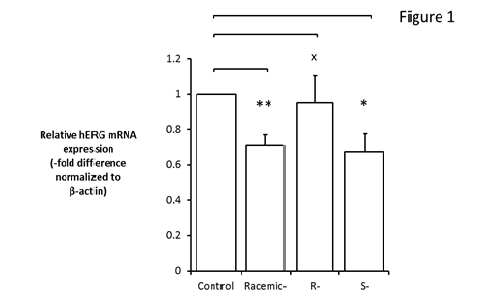 Figure 1:Reduced hERG gene expression in primary human cardiomyocytes after 5 days of treatment with racemic- and (S)-methadone but not (R)-methadone

Cardiomyocytes were treated with racemic-, (S)- and (R)-methadone for 5 days, and then total RNA extracted and cDNA synthesized. Relative hERG gene expression was determined by real-time PCR based on the Pfaffl method [30]. Data was collected from n = 3 independent experiments (*P < 0.05). X indicates no significant differences. 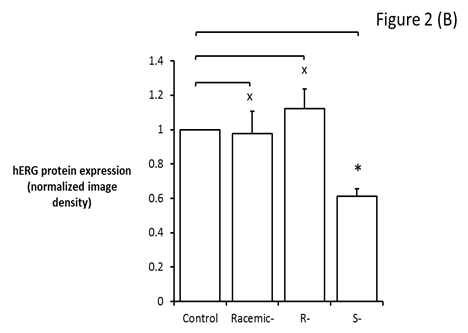 3.3 Modulation of the transcription factor SGK3, but not Hsp90, by racemic- and (S)-methadone 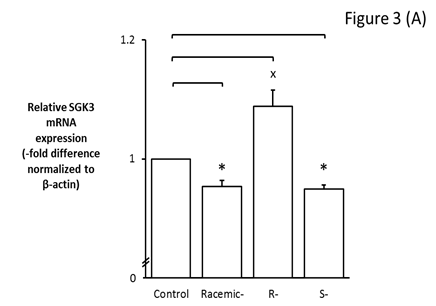 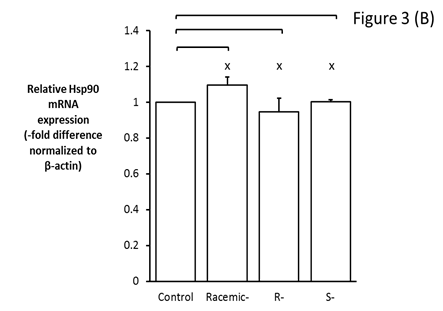 Figure 3: (B) Graphical representation of Hsp90 mRNA expression normalized to ?-actin. Hsp90 gene expression was not affected by chronic treatment with racemic-, (R)-, and (S)-methadone. Relative gene expression was measured according to the Pfaffl method [30]. Data are representative of n = 3 independent repeats with X indicates no significant differences (P > 0.05).

Although methadone has been established as a safe drug, reports of methadone-associated arrhythmia have increased substantially from 1997-2011, with the number of cases of QT interval prolongation and TdP similar to that of other highly proarrhythmic drugs, such as dofetilide [31]. Consequently, there is an urgent need to reassess the effect of methadone on cardiac health.

Here, at a concentration that has been reported to block 50% of hERG channels (IC50), hERG mRNA expression in human cardiomyocytes was significantly reduced after 5 days treatment with racemic- and (S)-methadone, but not (R)-methadone (Figure 1). Thus, it appears that the disruptive effect of (S)-methadone on hERG gene expression is dominantly in the racemic-form.

Essentially, the variation/ratios of (R)- and (S)-methadone in the racemic-form may be influencing the therapeutic response [33]. However, there is still inadequate data to show this unequivocally. Furthermore, the magnitude of the effect also depends on an individual’s predisposition in drug clearance and interactions [34].

To further understand the molecular mechanisms of racemic- and (S)-methadone, we examined the involvement of SGK3 and Hsp90. These molecules are implicated in hERG gene transcriptional regulation and protein trafficking to the cardiac plasma membrane, respectively [26, 17]. Altered expression of both molecules in the mechanism of drug-induced hERG expression defects has been reported elsewhere [24]. We found significantly reduced SGK3 gene expression after 5 days treatment with racemic- and (S)-methadone, corroborating studies demonstrating transcriptional regulation of SGK3 on hERG [26, 27].

hERG abundance in the plasma membrane is a key determinant of hERG functionality. Maturation and trafficking of hERG protein to the plasma membrane is dependent upon chaperone proteins, such as Hsp90 [17, 26]. With the exception of arsenic oxide, the mechanism responsible for reduced trafficking remains unknown, therefore we wanted to examine a potential trafficking mechanism for methadone. We found no significant changes in Hsp90 gene expression with racemic-methadone or either of its isomers. This implies that reduced hERG protein expression following chronic methadone treatment is not regulated by Hsp90. However, in order to ascertain that Hsp90 does not play a role in methadone-reduced hERG expression, further studies must be performed to examine Hsp90 protein levels.

Our findings conclude that chronic racemic- and (S)-methadone, but not (R)-methadone treatment reduces hERG gene expression in human cardiomyocytes, and this involves interruption of transcription factor SGK3 gene expression. Although hERG protein was also affected by chronic (S)-methadone treatment, Hsp90 which plays role in protein maturation and trafficking is not affected by any methadone forms. More work is needed to understand these methadone-induced alterations in hERG expression, and develop further strategies for determining cardiac risk for this drug in which a consideration to prescribe only the (R)-methadone for any treatment is highly recommended.

Ethics approval and consent to participate

Availability of data and materials

Data and materials related to this work are available upon request.

The authors declare that they have no competing interests

This work was supported by the Ministry of Education, Malaysia and Universiti Sains Malaysia under the Incentive and Short Term Grant (No. 304/CIPPM/61312013).

NFM is the study’s principal investigator and was involved in the initial and final drafting of the manuscript’s intellectual content. MFH was responsible for the experimental work, data collection, and statistical analysis. Both authors have read and approved the manuscript.

We thank Ministry of Education, Malaysia and Universiti Sains Malaysia for funding supports. We also thank Institute for Research in Molecular Medicine (INFORMM) for the availability of research equipment and facilities.