Instead of classical treatments like diagnosing the injury of cervical muscles as cervical spondylosis or torticollis generally and applying massage, we found out from which muscle injured the pain and dysfunction came and according to that, this study was done to increase the effectiveness of therapy combining newly tractoration of individual muscles with the classical therapy. The aim of the study is to determine the effectiveness of the new manual therapy based on tractoration of individual muscles, according to them after finding out the injured muscle scientifically in fasciitis of cervical muscles. 70 patients (54 men and 16 women aged from 12 to 55) with the diagnosis of cervical fasciitis hospitalizing in Manual Therapy Department, Pyongyang Traditional Hospital and Nampho. Traditional Hospital participated in this study.

Fasciitis of cervical muscles are often seen in many people as a pain of skeletal muscle and is mainly caused by disorder of posture, lack of exercises and excessive exercises [1]. The recent study shows that many diseases, complaining of the pain in the neck and shoulder like cervical spondylosis, neuralgia of great auricular nerve and greater occipital nerve, periarthritis of the shoulder are all caused by the activation of trigger point of giving muscles and trigger point is the point which can cause the pain in the fatigue muscles so it is radiated to the distance [2]. The trigger point plays a vital role in diagnosis and treatment. The study shows that if we push the trigger point, the localized tenderness and taut band palpated the funicular structure along the muscle, the local twitch response and even referred pain individual to each muscle occurs [3]. Especially, it was studied that nonpharmacological treatment on trigger point like manual therapy, acupuncture and tractoration of muscles is effective in case of fasciitis [4, 5]. But there is no discovery that shows the individual muscle therapy, according to the injury of individual muscles consisting of cervix. For the reason, we studied for treatment of cervical fasciitis with the tractoration after finding out the injured muscle scientifically in case of cervical muscle injury

First, there is various pain (dull pain, swelling, pain and furious pain) and dysfunction in the local places of giving muscles. Second, induration and funicular structure can be palpated. Third, there are its own trigger point and radiation, according to the cervical muscle injured.

2.1.1 Differential diagnosis: Radiation follows the nerve track in nervous system diseases and there is the disorder of sensation or change of reflex. Headache and cervical rigidity and nausea by circulatory system diseases are related with the blood pressure.

2.2 Diagnosis point of fasciitis of individual cervical muscles according to the attraction pain, trigger point and radiation

We have found the trigger points and radiating pain of five muscles from literature search and then found out injuries of individual cervical muscles based on the pains in case of hyperextension of muscles, points are as follows.

2.2.1 Diagnosis of fasciitis of trapezius muscle: 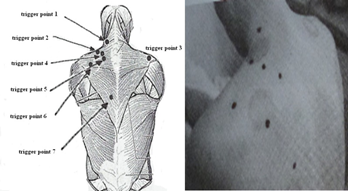 2.2.3 Diagnosis of fasciitis of sternocleidomastoid muscle:

2.2.4 Diagnosis of fasciitis of splenius:

Third: muscle tractoration in fasciitis of sternocleidomastoid muscle Patient sitting, leaning back in chair. The patient fixes the patient’s hand to the edge of the chair. Then, the operator rotates the patient’s head towards the other hand and pull the neck to the healthy one holding the side head and chin.

Fourth: muscle tractoration in fasciitis of splenius. The patient is supine. The operator pull the splenius muscle by traction of the neck holding the head.

It was done by pain at rest, tenderness, dysfunction, electromyography findings.

2.4.1 The pain at rest was assessed by visual assessment of simulation (VAS): The grade is as follows.

Normal: 0: no pain when strongly pressed, or in passive motion.

Mild: 1: pain when strongly pressed but no in passive motion.

Moderate: 2: pain and feeling uncomfortable when strongly pressed and disorder in passive motion.

Severe: 3: Being atrophied and pain when strongly pressed and severe disorder in passive motion.

Severe: 3: Not being able to do joint movement and daily life activity.

Fully recovered: Able to do normal activity without neck pain, pressure feeling and other objective symptoms

Remarkably get better: A little uncomfortable when do some activities or the weather changes eventhough subjective and objective symptoms are diminished.

Get better: Still feel pain and pressing over the neck when do some activities or the weather changes eventhough subjective and objective symptoms are almost diminished.

Not treated: No big change in the subjective and objective symptoms before the treatment.

The medium frequency is calculated as follows.

3.1 The change of the pain during rest

Like table1, in all groups the pain during rest is remarkably decreased compared with before treatment, especially in the study group compared to control one (p<0.05).

3.2 The change of tenderness for each muscle

3.2.3 The change of tenderness in rectus capitis posterior muscle: Like table 4, the tenderness is significantly diminished after treatment in the study group than control group (p<0.05).

3.3 The change of dysfunction

Like table 7, the degree of dysfunction significantly improved after treatment than before in both of control groups and study one, especially in the study group (p<0.05).

3.4 The change of medium frequency value in EMG

Like table 8, the medium frequency value in the muscles in which fasciitis occurs is significantly increased after treatment than before (p<0.05).

Like table9, in fasciitis treatment of cervical muscles by this way,  the total result is 94.3%   that is fairly higher than controls which are treated by normal way (p<0.05).

Nowadays, acupuncture, moxibustion, physical tractoration and massage for cervical fasciitis has advanced as the science and technology develops. However, they are still the general therapeutic ways and massage also has some disadvantages in scientific application. Especially, it is quite important to know the characteristics of the fasciitis symptoms for each muscle, and the radiation pathway of the pain and choose the correct therapeutic way in the improvement of the therapeutic benefits of neck and shoulder pain. Therefore, we aim to show clearly the characteristics of cervical fasciitis symptoms and the effect of each tractoration for each injured muscle. We surveyed 70 patients diagnosed as cervical fasciitis through clinical evaluation. When press certain trigger points of trapezius, sternocleidomastoid muscle, levator scapulae, splenius and rectus capitis posterior muscle, each has its own tenderness and hyperextension of each muscle led to certain pain (traction pain) and this is right in document 9.

Also in the study group which combines the general therapy and tractoration of each injured muscle, the clinical index such as pain and dysfunction is remarkably improved than in the control group. And the medium frequency value in the muscles with fasciitis is effectively increased than before and the total result is 94.3% that is fairly higher than control group (77.1%) (table 1-9). Likewise, when we become scientifically aware of the damage mechanism, characteristic of symptoms and therapeutic principales of each muscle of cervical fasciitis and combine several therapies with traditional therapy, we can bring about more effective treatment and so increase their labor's ability.