Milk is an excellent source of most essential minerals for humans [1]. Milk and dairy products are important components of a healthy diet. The composition of milk varies from animal species, but in every case, it has a high priority in human nutrition [2]. More than 5% of the world’s milk comes from buffaloes [3]. Buffalo milk is mostly used in South Asian Countries as the largest producers of buffalo milk are from India, China and Pakistan [4]. Buffalo milk was low in cholesterol, high in fat and calories. It has high protein, Calcium, iron, vitamin and phosphorus [5]. The value of cow milk has many health benefits for human beings to improve the immune system and it also helps in the improvement of strong bones and teeth. It produces a good form of cholesterol in the body due to the presence of omega-3-fatty acids it prevents cardiovascular conditions like heart strokes. The significance of goat milk in human nutrition has so far received very little factual and academic attention despite its medical need for some people, especially infants afflicted with various ailments, including cow milk protein sensitivities [6-8]. Goat milk proteins and fats have many significant differences in their composition from the milk of other mammalian species, especially in relative proportions of the various milk proteins, fats and in their genetic polymorphisms [9-11]. Goat milk has shorter rennet coagulation time, less resistance to heat treatment, curd firmness is weaker and cheese yields are less, which might explain significant differences to cow and other milk in digestion by infants and patients, which traditionally have been explained by the homogenized nature of goat milk fat [12-14].

Human milk is believed to provide all the nutrients, essential minerals and trace elements that are required by the normal term infant growth, until weaving with few exceptions, excessive micro ids, nutrient supplies to the mother or moderate deficiencies in her diet do not greatly alter the supply to the infant. Thus, the infant is well protected by maternal homeostatic processes [15-17]. There is a wide variation in the reported data on the concentrations of trace elements in human milk from different countries. The composition of human milk varies over the course of lactation and in each individual. Human milk differs from cow’s milk both in terms of macro and micronutrients [18].

Donkey’s milk production is much more limited when compared to other species' milk [19]. It shows a closer resembles with human milk in case of protein, ash, lactose, pH and nutrition levels. It contains high levels of vitamin ‘C’, less total fat and more anti-inflammatory omega-3-fatty acids, immunity enhancing compounds particularly lysozyme and lactoferrin in helping to protect infants and peoples from disease conditions like asthma, eczema or psoriasis. It contains high volumes of vitamin B, B12 more than 60% vitamin ‘C’ when compared to that of human milk and minerals, vitamins, low volumes of fat and proteins [20-23]. In the present study, we made an attempt to investigate and compare the mineral composition of human, cow, buffalo, goat and donkey milk.

2.1.1 Processing milk samples: Fresh milk samples from buffalo, cow, goat and donkey were collected. Human milk was obtained from lactating women after 3rd month of lactation to get mature milk. To the 100 mL, milk concentrated glacial acetic acid is added drop-by-drop on a magnetic stirrer, until the clear agglutination. A clear portion of the milk solution is separated from the agglutinated milk by using Whatman grade 3 chromatographic filter paper. The pH of the collected milk solution is adjusted with NaOH until it reaches to 8.0. This filtered milk solution is placed in a hot air oven at 50°C for 2 hours to reduce the volume up to 50 mL. Concentrated milk solution is subjected to centrifuge at 8000 rpm (room temperature) for 5 minutes to remove the debris.

2.1.2 Preparation of milk flakes: The collected supernatant was subjected to dialysis using a fisher brand dialysis tubing (21-152-14) with a molecular weight of 12000 to 140000 for 2 days. Immersed the dialysis membrane in a flask containing a large volume of sterile distilled water on a magnetic stirrer. Every 12 hours the water is changed. After dialysis, the sample was collected and centrifuged at 8000 rpm for 5 minutes at room temperature. The supernatant was collected without disturbing the pellet and transferred into the polystyrene Petri dishes. The plates were placed in the hot air oven at 50°C for 6-7 hours until it gets dried. A thin and transparent film/layer is observed and was collected for further biochemical characterization.

2.2.1 FTIR (Fourier Transform Infrared Spectroscopy): This technique is used to analyze the organic and inorganic compounds, both quantitatively and qualitatively. FTIR is a powerful tool that can be used for the detection of functional groups and also characterize the information of chemical bonding. FTIR uses a Fourier Transform to convert the raw data into the spectrum. FTIR spectroscopy analyses were carried out using a Jasco Fourier transform infrared spectrometer 410. FTIR spectrophotometer was connected to a photoacoustic cell in the spectral range from 450 to 4000 cm-1.

2.2.2 Gas Chromatographic (GC) Analysis: GC analysis of five milk flakes was performed using a Thermo Scientific Chemito GC 8610 system and Gas chromatograph equipped with an Elite-I, fused silica capillary column (20mm X 0.25mm ID-BP X 700-25, composed of 100% Di methyl poly siloxane). For GC detection, a Flame ionization system with ionizing energy of 70eV was used. Nitrogen gas (99.999%) was used as the carrier gas at a constant flow rate of 1mL/min and an injection volume of 5μL was employed (split ratio of 10:1); Injector temperature 100°C; Ion-source temperature 100°C. The oven temperature was programmed from 100°C (isothermal for 2 min.), with an increase of 10°C/min, to 200°C, ending with a 15 min isothermal at 200°C. Total GC running time was 30 minutes. The relative percentage amount of each component was calculated by comparing its average peak area to the total areas.

2.2.3 Energy dispersive X-ray spectroscopy: To evaluate elemental composition in five different milk flakes, we performed SEM-EDAX analysis as per the method [24-26]. Milk flakes were placed on the sample holder (stub) with carbon tape then make a conducting layer of gold-palladium with portable SC 7620 mini sputter coater or glow discharge system (Quorum Technologies Ltd.) then we load the sample in FESEM (Carl Zeiss supra 55 GEMIN German Technology) sample holding vacuum chamber. Fullscreen window and spot modes were employed depending on the size of the component. Thereafter applying the acceleration voltage of 20kv, working distance signal A in lens is a detectors and magnification of the image. 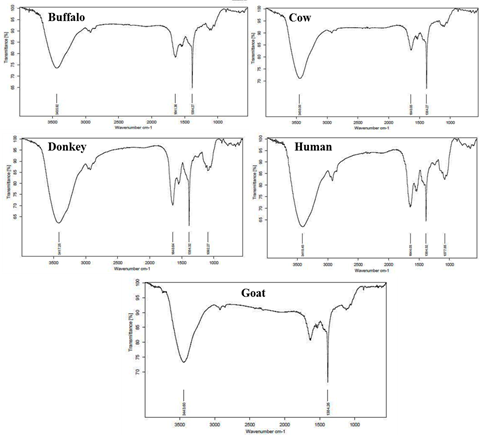 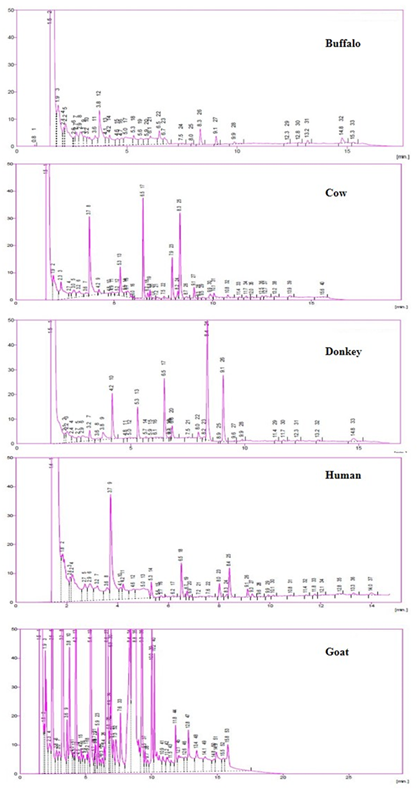 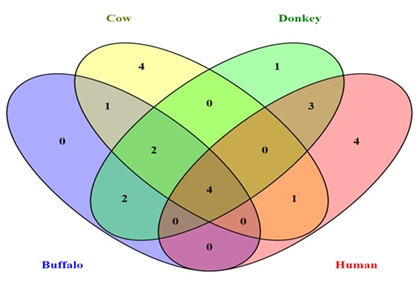 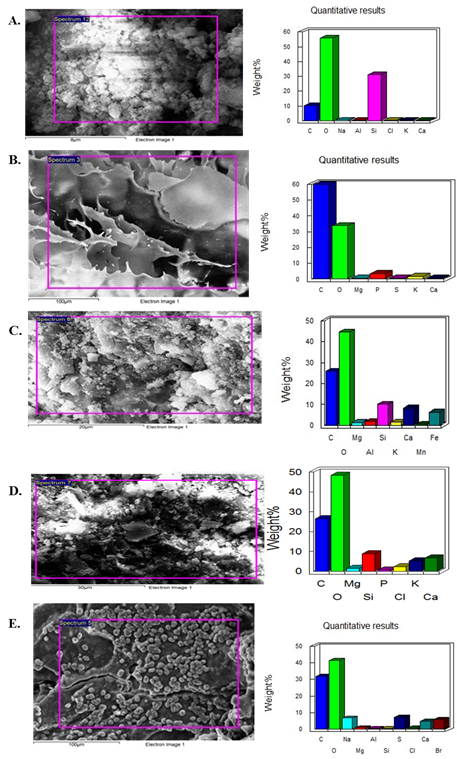 India occupies the first position in milk production in the world with 186 million tonnes of milk was produced in 2019, which was 22% of that year’s global total milk production of 843 million tonnes (Food and Agriculture Organization -FAO). The consumption of milk has enriched from 4.3 litre per capita per month in urban areas to 5.4 litres in last two decades, whereas in rural areas, the same improved from 3.2 litres per month to 4.3 litres per month. This growth is expected to sustain in the coming years. The increased consumption of milk and milk products, which are typically rich in protein, fat, cholesterol, macro- and microelements as well as fatty acids, is also allied with better incomes and nutritional access in developing countries [27]. Milk sources the Calcium, Vitamin D that is crucial in sustaining healthy teeth and bones, inhibit osteoporosis. Potassium increases vasodilation and drops blood pressure. Milk has induced immunoregulatory changes by increased T cell numbers in PBMC cultures of children [28]. Lactose is a sugar in milk that not all humans are able to process. The amount of lactose in milk varies differently in animals. Goat's milk, for example, has less lactose than cow's milk [29]. The enzyme, lactase digests, lactose sugar in milk and other dairy products. Some people experience decay in lactase production, those felt unpleasant and even painful, resulting in gastrointestinal discomfort upon the consumption of milk with high lactose content [30]. Even some people show allergic reaction symptoms towards the milk because their immune system reacts to milk proteins casein, alpha-lactalbumin and beta-lactalbumin as dangerous invaders [31]. Hence adulteration of milk causes potentially life-threatening for some people allergic reactions. Awkwardly milk and milk products were being very effortlessly adulterated throughout the world. Potential motives behind it may include- demand and supply gap, perishable nature of milk and lack of suitable detection tests [32]. Economic adulteration of milk was in practice by the addition of milk with a low-value ingredient, watering of milk, mixing of different species milk [33]. Need to develop analytical techniques to identify milk adulteration.

Fourier-transform infrared spectroscopy (FT-IR), Gas chromatography (GC), and Scanning Electron Microscopy (SEM) with Energy Dispersive X-Ray Analysis (EDX) to identify the type of contamination of milk with different species milk. In our study, we employed a combination of FT-IR, GC, and SEM with EDX techniques to identify the unique and common patterns among the various milk samples. Our study effectively distinguished low nutrient value milk with a high nutrient value milk sample. For example, FT-IR spectral analysis separated our samples into two distinct clusters. Donkey and human shows a similar spectral distribution pattern and display unique wavelength at 1077 and 1092 cm-1 respectively. On the other hand, buffalo, cow and goat milk samples showed a similar pattern, so this is difficult to identify individual milk type. Hence we extended our study to reveal the presence of distinct components by use of gas chromatography, GC is a widely used technique for the identification of volatile compounds. GC analysis effectively-identified various milk samples by using their unique retention time (RT). In support of the GC analysis, we further extended the study to identify the mineral content of milk samples using SEM-EDAX. All the milk samples are rich with carbon and oxygen in addition to Na, P, S, and Ca.

All authors declare the “No conflict of Interest”.