The tricuspid valve defects following implantation of heart stimulating devices receive more and more attention in literature. We present a case series of patients requiring permanent cardiac stimulation in whom the insertion of a lead through the tricuspid valve proved impossible.

A 36-year-old man with carcinoid syndrome complicated by severe tricuspid valve regurgitation required replacement of this valve. A bioprosthetic mitral valve was implanted in the tricuspid position. Third-degree atrioventricular block (AVB) with preserved left ventricular ejection fraction was observed after the surgery. The implantation of a DDD pacemaker was indicated. However, the insertion of a standard pacemaker proved impossible due to the presence of the previously implanted valve in the tricuspid position. Thus, a lead stimulating the ventricle was inserted via the coronary sinus, while an atrial lead was placed in the right atrium and a DDD pacemaker was implanted. Access to the coronary sinus was obtained via an incision of the cephalic vein. First the lead was placed in the middle cardiac vein, but due to high stimulation threshold it was shifted to the posterolateral vein. (Figure 1) Stimulation parameters were: R-wave 9.2 mV, impedance 429 ohms, threshold 2V/1.5 ms. Next, a lead was implanted in the auricle of the right atrium via the subclavian vein puncture. Radiation dose was 84 mGy. The pacemaker was placed in the pocket in the left infraclavicular area. At 3- and 6-month follow-up a gradual decrease in the stimulation threshold to 1V/1 ms was observed. 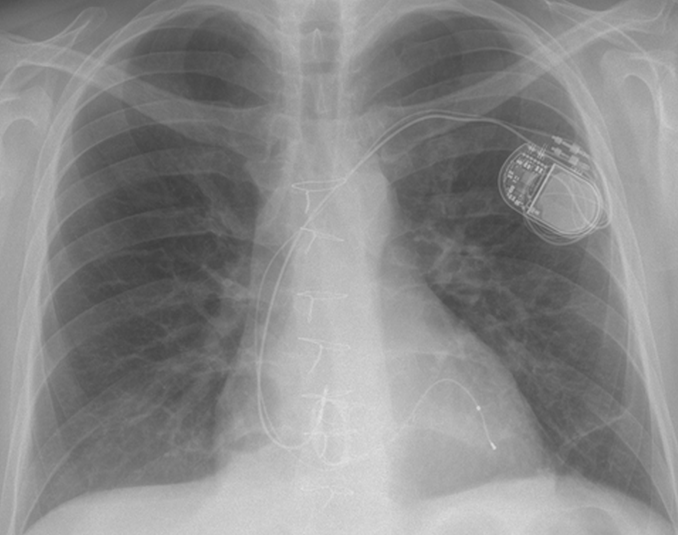 Figure 1: Chest X-ray of the patient with ventricular pacing in the posterolateral cardiac vein.

A 48-year-old woman after infective endocarditis of the tricuspid valve, with severe tricuspid valve regurgitation, required its replacement with an artificial one. On history taking the patient was found to have a secundum ASD with a left-to-right shunt. After tricuspid valve replacement surgery, third-degree AVB with complete dependence on temporary epicardial pacing and simultaneous threshold rise were observed. In addition, on physical examination large infraclavicular lipoma was revealed. The implantation of a DDD pacemaker with an electrode in the coronary sinus and a simultaneous resection of lipoma were performed. A two-stage procedure was adopted. In the first stage, the lipoma 8 cm in diameter was excised. (Figure 2) Next, the pacemaker was implanted via the same incision. Having accessed the coronary sinus, venography was performed, revealing that the posterior cardiac vein is the only available site for implantation. The following implantation parameters were obtained: amplitude R - not measured - dependence on stimulation, impedance 487 ohms, threshold 1V/0.5 ms. Next, a lead was implanted in the auricle of the right atrium via a percutaneous approach of the subclavian vein. Radiation dose was 283 mGy. The pacemaker was placed in the pocket in the left infraclavicular area. At 3-month follow-up the patient was well and the pacemaker worked properly. 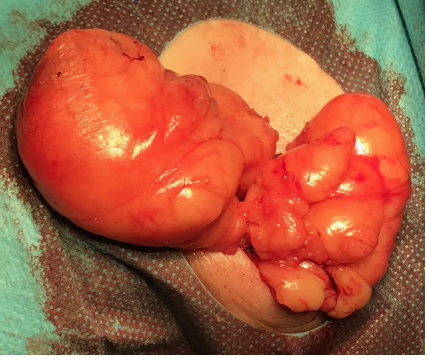 A 70-year-old woman after the implantation of bioprosthetic aortic, mitral and tricuspid valves in whom third-degree AVB was observed postoperatively was admitted to our department. On history taking the patient was also found to have chronic atrial fibrillation. In view of these comorbidities, 10 days after the cardiac surgery a VVI pacemaker with a lead in the coronary sinus was implanted. The procedure was uncomplicated. The ventricular lead was inserted via an incision of the left cephalic vein into the anterior cardiac vein. Radiation dose was 48.9 mGy. The parameters were: R 6.8 mV, 0.7 V/0.5 ms, 601 ohms. One month after the procedure the patient was well and the electrical parameters of the pacemaker were proper.

Tricuspid valve replacement is not a frequent procedure in comparison with other valve surgeries (approximately 1%). However, it results in a relatively high percentage of atrioventricular blocks due to anatomical proximity of the atrioventricular node and the tricuspid annulus [1]. Insertion of a standard pacemaker to the right ventricle might not be possible to perform, and even a successful insertion of an electrode may lead to a high percentage of secondary regurgitation [2, 3]. The application of epicardial lead systems is an alternative technique in such cases. However, in view of a tendency to high pacing thresholds, in patients potentially dependent on this method it is not considered an optimal solution. The possibility to stimulate the His bundle is a new and currently developing method. Pacing via access through the coronary sinus is yet another alternative which has been available for many years.

An increase in the application of cardiac resynchronization therapy results in the growth of operators' experience, technical advancement and effectiveness of such procedures. None of the procedures discussed above was hindered by any technical difficulties. In addition, no complications were registered in follow-up.

Data on cardiac pacing via the coronary sinus in the presence of an artificial tricuspid valve are mainly retrieved from case reports. In a retrospective study Noheria at al. described so far the largest group of 23 patients in whom cardiac pacing via the coronary sinus was applied, comparing it with traditional pacing of the right ventricle. Mechanical stability of the leads, their electrical parameters and changes in LVEF were evaluated. Multiannual observation revealed that pacing leads placed in the coronary sinus were mechanically stable and had good electrical parameters. Only longer fluoroscopy time during the lead implantation was reported [4]. Likewise, Sideris et al. presented a relatively large population of patients (17 patients), reaching similar conclusions [5]. Conclusions drawn from our considerably smaller group and a shorter observation time have been similar so far.

The cases discussed have highlighted that, in contrast to resynchronization therapy, mechanical stability and good pacing parameters prove more important than placement in a specific cardiac vein [4, 5]. In the cases shown in the present article we made similar assumptions, deciding to place the leads in sites ensuring the lowest possible stimulation threshold with simultaneously their most stable mechanical placement.

The cases discussed in the present article show that if permanent cardiac pacing is necessary, access via the coronary sinus proves a easily available and safe method. Neither technical difficulties nor complications during hospitalization or in long-term follow-up were observed.