Double Synchronous Primary Gynecologic Carcinoma of the Endometrium and Both Ovaries: A Rare Encounter

A 51-year-old nulligravida presented with some irregular abnormal uterine bleeding on and off, spotting in nature, of a few months duration, and was referred to our hospital for management. Her medical history reviewed well controlled chronic hypertension of 15 years duration, and fairly controlled diabetes mellitus with hyperlipidemia of 6 years duration. Surgical history showed anal hemorrhoid, and had been treated in the clinic. Physically, her body mass index was 25 kg/m2, and otherwise she was relatively healthy apparent. The first gynecologic ultrasound examination detected her endometrium 0.8 cm, uterine myomas 3.0 cm at anterofundal area and 3.7 cm at posterior wall. One month prior to the admission, a Pap test reported adenocarcinoma; then diagnostic D&C showed endometrial adenocarcinoma, well to moderately differentiated, with squamous differentiation. Inmunohistochemistry stain of tumor cells showed P16 (equivocal), ER (+, 80%), PR (+, 70%), vimentin (+) and CEA (equivocal). Tumor markers reported CA125 84.74 U/mL, CA-199 440.3 U/mL and CEA 2.61 ng/ml. Magnetic resonance imaging confirmed an1. 3 cm endometrial tumor compatible to endometrial cancer, uterine myomas, and a right ovarian cystic lesion (Figure 1a). She underwent gynecologic cancer staging operation, including total abdominal hysterectomy, bilateral salpingo-oophorectomy, lymphadenectomy and omentectomy. Uterine myomas , a small endometrial lesion, a small right ovarian cystic lesion of 24 mm and a small left ovarian lesion of 15 mm were found [Figure 1b]. The rest of the gross findings were unremarkable. Microscopically, the borderline tumor component shows a complex branching papillary architecture, with the epithelial lining resembling “endocervical-type” mucinous or serous epithelium, which is different from the “gastrointestinal- type” epithelium seen in ovarian mucinous tumors. High grade nuclear atypia is noted at the intraepithelial carcinoma component, including high Nucleus-Cytoplalsm ratio, vesicular chromatin and nucleoli. The invasive carcinoma area is represented by small nests of atypical epithelial cells surrounded by desmoplastic stroma. Therefore, the Pathology reported endometrioid carcinoma of the endometrium, well differentiated (FIGO grade 1), and the tumor invaded to superficial myometrium , FIGO stage IA; seromucinous carcinoma of the right ovary, limited to the ovary (Figure 2a, b), FIGO stage IA and seromucinous borderline tumor of left ovary, with microinvasion and intraepithelial carcinoma, and the tumor limited to the left ovary (Figure 3). The tumor cells are immunoreactive to the ER (>95%) and PAX8 and negative for p16 (negative, patchy), WT-1 and napsin A. The expression of p53 is wild type. The rest of the microscopic feature was unremarkable. Early double primary carcinoma is verified, but not metastatic cancer. Post-operative course was rather smooth without any complications. She was in remission at the time of this report and for continuing follow-up. 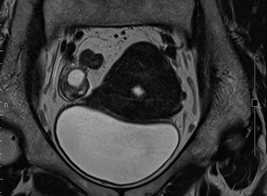 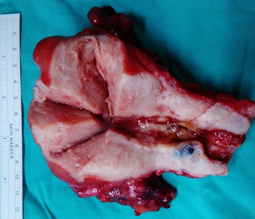 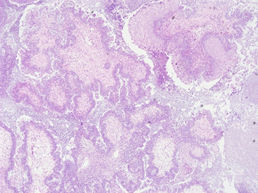 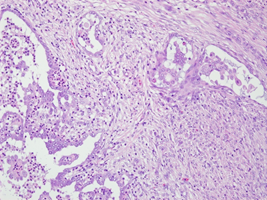 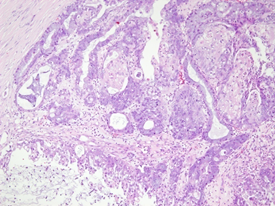 Synchronous primary cancers of the endometrium and ovary are not uncommon, and they are found in 10% of women with ovarian cancer and 5% of women with endometrial cancer [1]. A retrospective observational study examining Surveillance, Epidemiology, and End Results Program (SEER) between 1973 and 2013, concluded that synchronous ovarian cancer has decreased among endometrial cancer whereas synchronous endometrial cancer has increased among epithelial ovarian cancer [2]. It is known that women with synchronous primary cancers of the endometrium and ovary are young, obese, nulliparous, and premenopausal. In a study with a series of 84 patients, 68% of them (57) had endometrioid histology of both their endometrial and ovarian cancers; and the patients with concordant endometrioid histology had a favorable prognosis [1]. Seromucinous carcinoma of the ovary is an uncommon tumor. Given the characteristic admixture of cell types and the overlapping morphologic features with low-grade serous, mucinous, and endometrioid neoplasms; they are a new category of ovarian epithelial tumor in the revised World Health Organization Classification of Tumors of the Female Reproductive Organs. Borderline carcinomas are well described, but there have been few reports of seromucinous carcinomas [3]. Among 19 patients of ovarian seromucinous carcinoma, a synchronous uterine endometrioid adenocarcinoma was reported in 1 case [3]. Since the most appropriate categorization of seromucinous carcinomas remained uncertain, they are probably best regarded as a distinct type of ovarian epithelial malignancy, and are most likely behavior similar to endometrioid adenocarcinomas [3]. But, the controversy regarding the terminology of non-serous borderline tumors, or so-called "atypical proliferative tumor", in view of their largely benign behavior, has not been resolved. For seromucinous borderline tumor of left ovary of our patient, the concepts of intraepithelial carcinoma and/or microinvasion shall evolve even more in further studies, as their presence appears to have no prognostic impact; and also it is a subject to considerable inter-observer variability [4]. In a retrospective case-control study examining SEER program between 1973 and 2013, survival of women with stage I endometrioid endometrial cancer with stage I endometrioid ovarian cancer [EOC] (n=839) were compared to women with stage I EOC without synchronous ovarian cancer (n=123,692), a survival outcome was similar [5]. Although a retrospective analysis (in China) of 63 pathologically proven patients of synchronous primary endometrial and ovarian cancer reported lymphovascular space invasion (LVSI), non-endometrioid type ovarian cancer and stage of ovarian cancer above stage I were independent prognostic factors for progression-free survival (PFS); while LVSI, high grade of endometrial cancer, and stage of ovarian cancer above stage I were independent prognostic factors for 5-year overall survival [6]. In another multivariate analysis of 65 women with known lymph node status revealed two prognostically distinct groups: a high-risk group comprising endometrial endometrioid carcinomas (EECs) with ≥ 50% myometrial invasion irrespective of lymph node status (n?=?21; median PFS 12.7?months, 95% CI, 9.24-19.8); and a low-risk group consisting of all endometrial non-endometrioid endometrial carcinomas (ENECs), as well as lymph node-negative ENECs with <50% myometrial invasion (n?=?44, median PFS not reached) [7]. Therefore, in conclusion, we expect our patient although with non-concordant early double primary gynecologic carcinoma, not metastatic, will have a good prognosis.