Electric Phenomenon in Bones as a Result of Piezoelectricity of Hydroxyapatite

The first research data regarding piezoelectricity was the result of many years of work by the Curie brothers [1-10]. It applied to electrical phenomena occurring in quartz crystals under mechanical pressure. These studies have been extended to other minerals and synthetics, showing the presence of similar phenomena in them.

2. Study Conducted with the Author's Own Resources

Considering the impact of bones on the functioning of the body, we need to take into account their huge surface: after converting the surface of all bone trabeculae from all human bones to one surface, we get the value of 380 000 to 420 000 m2  [18]. On that surface, elements of bone such as bone marrow, body fluids, cells and others get in contact with bone collagen containing micro-crystals of hydroxyapatite. On this contact point, there is constant physicochemical equilibrium between the "biological world" and the "mineral world" of bone. On such a vast surface, elements are passed both ways throughout a human’s life, and in the course of life, this system of minerals vs. "biology" is evolving.

All biological processes occurring in the bones are accompanied by electrical phenomena connected, among others, with their piezoelectric properties. Their relevance seems to be difficult to overestimate.

Piezoelectric testing of bone hydroxyapatite is not possible at the present apparatus level due to the nano-size of its crystals. As a result, piezoelectricity of this mineral was studied on large crystals (Figure 1A) and the obtained results can be transferred to nano-crystals in bones. Likewise, electrical phenomena observed in large crystals of apatite can be transferred to nano-crystals found in bones (Figure 1 B).

When discussing piezoelectricity, we need to pay attention to the details of the relation between collagen and bone hydroxyapatite, as well as electrical phenomena manifesting outside the bone. 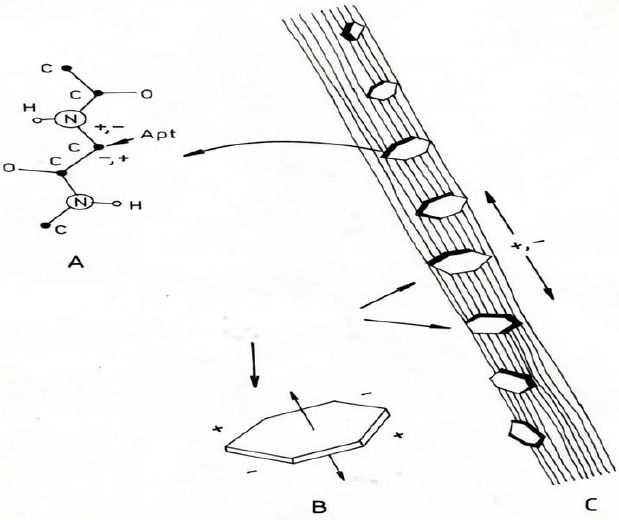 While discussing the above phenomena, we should address some of the problems that may be related to them, such as:
- Mechanical bone stress and osteoporosis,

- Influence on the functioning of certain tissues and organs

Generated "bone" currents can also affect bone collagen itself, especially the binding between collagen and hydroxyapatite. It appears that currents generated during stress (during walking) promote stability of these bonds. Absence of these currents can probably cause the bindings (ionic: apatite - collagen) to weaken or be broken. The effect is loosening and weakening of the bone structure.

This situation takes place in bone unaffected by gravity, eg. in astronauts in space. Studies show that osteoporosis in conditions where gravity exists is an effect of clogging of micro-arteries in the bones. Crystallizing substances in those arteries are both phosphates and cholesterol [21,23].

Piezoelectrically induced currents in bone apatite may affect various bone components, including arteries in which endothelial cells have a polar structure (Figure 3). 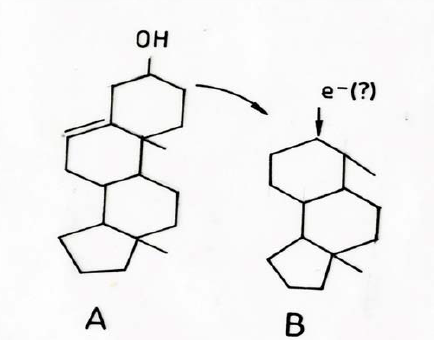 This issue is complex and not fully explained, and it requires further experimental research. It seems that treating astronauts’ bones in space with weak alternating currents could probably minimize the osteoporosis process.

cell membrane. B- structure of partially destroyed phospholipid with endothelial cell membrane (eg. due to inflammation in the body). The site of destruction may be deprived of electrical charges by flowing "bone" currents. This way, the possibility of using damage site as the center of calcification or cholesterol crystallization is reduced.

4. Influence on the Functioning of Certain Tissue and Organs

The  bone  system:  trabeculae  –  bone  marrow  and  other  elements  (vessels,  nerves,  etc.)  is  a  system  of physicochemical equilibrium. It changes throughout life, from youth to old age. Its function is to transfer elements from the "biological part" to the "mineral part" and vice versa [18]. So far, electrical phenomena generated in bones in the "biological part" have not been studied.

Their influence seems unquestionable as the vast majority of chemical processes that take place in bones, including their "biological part", are ionic. It is also likely that the microcurrents that form in the bones stimulate the synthesis of bone-generated blood components.

5.  External  Relations  Between  Pressure,  Gravity  and  Electromagnetic  Field,  and  Electrical

Mechanically bent apatite plates generate differences of potentials at the ends of the crystals [22]. Undoubtedly, they do not cover all the problems that may be associated with piezoelectric phenomena observed in bones. Thus, walking that exerts pressure on the (leg) bones and on the hydroxyapatite microcrystals in trabeculae causes the creation of currents [12]. They are alternating currents in the up-down - up-down direction [11, 19].

It is assumed that generating currents in bone may also occur as a result of changes in external atmospheric pressure, as well as changes in gravity (eg. in astronauts). It can not be ruled out that changes in the electromagnetic field also cause micro-vibrations of bone apatite crystals and generation of currents (Figure 4). The significance of these theoretically discussed phenomena is difficult to overestimate. 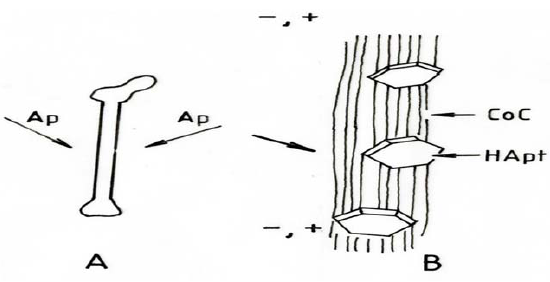 Figure 4: Schematic diagram of the influence of external pressure, gravitation on electrical phenomena in bones. A - example of pressure changes (ζp) on the human femur. B - schematic of generating alternating currents in collagen fiber by hydroxyapatite crystals subjected to pressure by external forces

Because stressing and unstressing of bones leads to the development of alternating currents, walking causes the same flow of currents [29, 19]. Currents generated in this way undoubtedly influence the creation of a weak, alternating electromagnetic field around the bone that generates these currents. It is also an alternating field, and its value depends not only on the value of the generated currents, but also on the enormous surface area of the bone (the sum of the surfaces of all the trabeculae generating currents). It may be too daring to say that the bone that generates alternating currents can be treated like a great transceiver antenna, but it may actually be so. 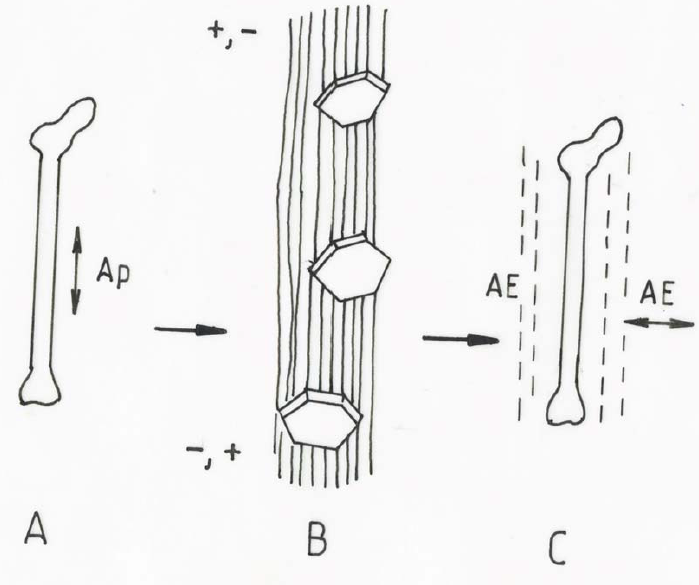 Complexity of the bone healing process is obvious. Among its elements are the generation of collagen with centers of apatite crystallization, the phenomena of angiogenesis (Pawlikowski - Biomineralogy of angiogenesis - in print), the re-launch of alkaline phosphatase synthesis, and others.

After a bone fracture, various components of bone are destroyed, including collagen fibers mineralized with apatite in damaged trabeculae. For this reason, as well as through the stabilization of the fracture (plaster fixation, AO plates, etc.), electrical systems occurring in the unbroken, stressed bone get damaged and disturbed. Hence, the use of artificial - external alternating electromagnetic field may stimulate bone healing by approximating the "electrical conditions" occurring in bones to natural conditions. This alternating field may also probably stimulate angiogenesis and other processes. Although some publications suggest the toxicity of the alternating electromagnetic field used to accelerate bone healing [27], it seems very important in this case to match the generated field to the field produced by the natural bone. It requires further research; however, at the current stage of knowledge it is purely theoretical.

Despite the fact that the currents in bones are very weak (as they are in the brain), they are absolutely elementary. Their incompletely recognized role for the functioning of the whole body is difficult to overestimate.