Case Presentation: A 28-year-old man was incidentally found to have a left adrenal nodule at a regular physical examination 3 years ago. He suffered from increased appetite, gained body weight (2 years increased by 20 kg) and fracture of multiple ribs. Endocrinological examinations showed autonomous secretion of cortisol and suppression of plasma ACTH level. Imaging examination revealed a left adrenal gland adenoma. He was diagnosed with ACTH-independent Cushing’s syndrome due to left adrenal adenoma. Laparoscopic resection of left adrenal adenoma was then performed. Hydrocortisone was given intravenously and tapered after operation, followed by oral prednisone replacement therapy (10 mg/day) five days later. The patient developed a systemic pruritic rash with moderate fever of 38.6°C and conjunctivitis on postoperative day 20. He was diagnosed as erythema multiforme and received a twenty-day intravenous injection of methylprednisolone, followed by oral prednisone. External application of dexamethasone was administrated simultaneously. The fever subsided on day 7 of fever onset and the skin lesions presented with massive erythema. The erythema gradually expanded to fuse and finally subside after epidermal detachment. The skin returned to normal after molting on approximately day 45. The prednisone was discontinued 6 months after the operation.

Conclusion: Immediate withdrawal of high glucocorticoids after surgical therapy of Cushing’s syndrome can result in excessive immune response and systemic erythema multiforme. An extra observation and timely treatment should be given in addition to the routine steroid replacement therapy.

Cushing’s syndrome is a clinical picture resulting from nonphysiological hypercortisolism, which is similar to the excessive use of exogenous glucocorticoids, often induces a reversible state of immunosuppression [1]. Surgical therapy remains the mainstay treatment for patients with Cushing’s syndrome. The immediately decreased serum cortisol level after surgery may cause immune dysfunction though the immune system modulation following the therapy of Cushing’s syndrome remains unclear. Steroid replacement therapy is routinely given in these patients. However, some unexpected excessive immune response may still occur. New onset of autoimmune diseases after curation of Cushing's syndrome has been reported, including autoimmune thyroiditis, rheumatoid arthritis, athma, sarcoidosis, and primary biliary cirrhosis [2-7]. We presented a case that developed severe systemic erythema multiforme after adrenal adenoma resection for Cushing’s syndrome.

A 28-year-old man presented with a gradual increase in appetite and weight gain (20 kg for 2 year). Physical examination showed Cushingoid specific feature including moon face, central obesity, buffalo back, purple pattern and specific skin lesions including pigmentation and fragility. His past medical history and family history was negative. He was 170 cm tall, and 69 kg weight with body mass index 23.86 kg/m2. His blood pressure was 128/90 mmHg.

The patient was diagnosed as ACTH-independent Cushing's syndrome originated from the left adrenal adenoma according to the findings. Curative resection of the left adrenal adenoma was performed. The pathological examination confirmed a benign adrenocortical adenoma (3.0 × 2.6 cm, 8.0 g encapsulated adenoma with no capsular or blood vessel invasion). Follow-up abdominal CT scan showed no residue or recurrence of tumor (Figure 1D, E). 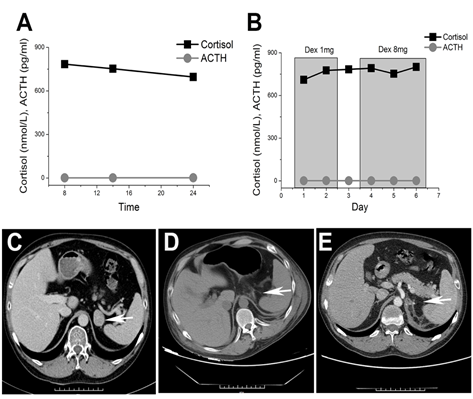 Hydrocortisone (200 mg/ day) was given intravenously after operation with dose tapering down. The patient discharged on postoperative day 5. Oral prednisone 10 mg/ day was administered. He developed a pruritic erythematous maculopapular rash on his head, neck, torso, and extremities at postoperative day 20. The rash spread rapidly and merged each other. Vesicles appeared in the center of the rash 3 days later (Figure 2A, B, C). The patient suffered from pain after rupture of vesicles. Physical examination showed a fever of 38.6°C, red and swollen conjunctiva, multiple symmetrical edema erythemas throughout the body. The erythemas protrude above the skin. They were bright red with central blisters. Laboratory data revealed a significantly elevated immunoglobulin E (IgE) level. The ESR, anti-nuclear antibody and other immune indicators were in the normal range (Table 3).

He was diagnosed as erythema multiforme and received intravenous infusion of methylprednisolone for 20 days. The dosage of methylprednisolone was tapered down and switched to oral administration of prednisone thereafter. The hormone taper schedule is shown in Table 4. Meanwhile, two antihistamines (loratadine 10 mg, p.o qd; ketotifen fumarate, 2 mg, p.o bid) were given orally. External application of a mixture of dexamethasone (4.5 mg) and calamine lotion (100 ml) in combination with wet-wrap of 3% boric acid solution were also performed every day. The symptoms begin to alleviate after three days. The fever and rash gradually subsided. The skin returned to normal after massive epidermal detachment on approximately 45 day after treatment (Figure 2D, E, F). 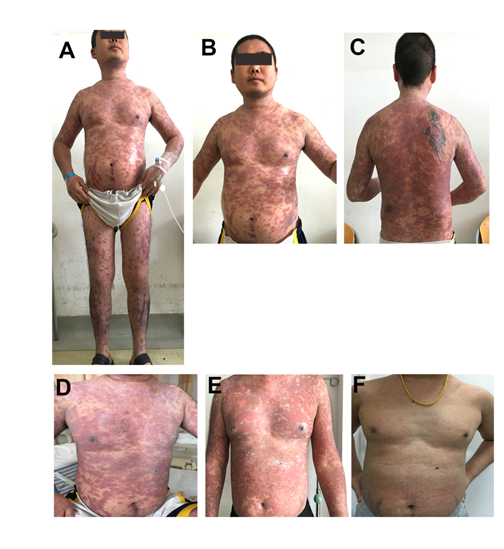 The treatment of Cushing's syndrome is to improve the symptoms and signs of patient by reversing the hormone levels to normal land recovering hypothalamic-pituitary-adrenal axis (HPA axis). Surgical removal of the adrenal gland is the preferred treatment for patients with adrenal tumors that secrete excess hormones. In general, long-term inhibition of the HPA axis by adrenal tumors results in obvious adrenal insufficiency after operation. And glucocorticoids are applied in these patients after surgery until the HPA axis returns to normal, which generally take 6 to 18 months [8, 9].

Erythema multiforme (EM) is an acute disease on the skin and mucous membrane. The mechanism involves complex antigen antibody reactions that target small blood vessels in the skin or mucosa. It is characterized by the appearance of distinctive target-like lesions on the skin (blistering, ulcerative, mucocutaneous lesions on the extremities and trunk) [10]. The diagnosis of erythema multiforme mainly relies on the history and clinical findingssince histopathologic features and laboratory investigations are nonspecific. In this case, it was diagnosed by the patient's typical medical history and clinical manifestations.

Surgical therapy of Cushing’s syndrome can result in rebound immunity due to sudden decrease of cortisol level. The rebound immunity may lead to overt disease, which occurs shortly after treatment or delayed for several months [4]. The most common is thyroid autoimmune disease; wheras there is few reports of skin lesions. Da mota et al. [4] reported that a 32-yr-old woman developed a pruritic rash over the arms and back in 2 months after pituitary surgery for Cushing’s disease in 1992. Severe skin lesion may occur after surgical treatment but has not been reported yet. Our report demonstrated for the first time that severe and life-threatening systemic erythematous erythema did occurre after ACTH-independent Cushing's syndrome and it can be cured by appropriate treatment.

The mechanism underlying skin lesions after surgical treatment of Cushing’s syndrome remain unclear. It may be associated with the interactions between the endocrine system and immune system. The imbalance induced by sudden decrease of cortisol level after surgery may be attributed to the development of skin lesions. The endocrine system influences the immune system both directly and indirectly at the developmental and functional level. Glucocorticoids are the main endogenous mechanism to suppress the inflammatory response genes. Glucocorticoids can compete with or facilitate the binding of transcription factors to regulate cytokine genes expression [4]. Interaction between the glucocorticoid receptor and pro-inflammatory nuclear factor-kB protein represent one such mechanism [11]. Persistent hypercortisolism induces lymphopenia and lymphoid tissue atrophy. The effect of glucocorticoids on lymphocytes is mainly directed at T cell lymphocyte proliferation through inhibition of IL-1 production by monocyte-macrophages and of IL-2 by activated T cells. However, increased circulating levels of glucocorticoids suppress synthesis of IgE. Skin and leukocyte sensitivity to Trichophyton extract persisted and was even more pronounced than the sensitivity before adrenalectomy. The presence of Trichophyton-specific IgE was confirmed after adrenalectomy [12]. There was also a significant increase in IgE in our cases. In addition to effector mechanisms, glucocorticoids are increasingly recognized to influence IL-10-secreting regulatory T cells. Plasma IL-10 concentrations increased significantly and consistently following the injection of 100 mg hydrocortisone intravenously [13]. These CD4 cells can naturally occur in the thymus or be induced peripherally, leading to the attenuation of allergic responses to antigens but also of autoimmune, infectious, and inflammatory processes. In this study, the successful treatment using combination of cortisone and H1 blocker confirmed the hypothesis. The occurrence of erythematous erythema may be due to the mechanism above. However, further study is warranted.

We thank Yuanfei Peng and Jennifer M. for their editorial assistance and linguistic advice.

The authors have nothing to disclose.