Fat embolism syndrome (FES) is a not common subacute syndrome caused by fat droplets and bone marrow entering systemic circulation and thus causing obstruction of pulmonary, cerebral and cutaneous vessels [1]. Fat embolism is a known and potentially lethal complication of fractures of the long bones of lower extremities, particularly the femur [4], but it is also widely documented with hip or knee arthroplasty and with intramedullary nailing surgery [5-9]. Obesity, immobilization and osteoporosis are adjunctive risk factors for fat embolism [13]. In contrast, fat embolism is very rarely associated with vertebral compression fractures, so that there are only three similar cases previously reported in literature [10-12].

Many authors reported clinical criteria to detect fat embolism syndrome, but none of them had been validated or universally accepted [8]. As there are no specific criteria, incidence of FES range between less than 1% to more than 30% [2]. Respiratory distress is the most significant feature, but it could be associated with neurological symptoms, petechial rash, microvascular lesions of the retina and other aspecific signs, such as tachycardia, tachypnea or fever [8]. The case we observed concerned a 74-year-old woman suffering from obesity and osteoporosis sustaining thoracolumbar vertebral fractures, who developed a fatal fat embolism 20 days after admission at hospital. The post-mortem examination revealed the presence of bilateral and diffuse fat and bone marrow embolism of the lung vessels responsible for the unexpected death of the woman.

A 74-year-old woman with a history of obesity, mild cognitive impairment and peripheral vascular insufficiency with necrotic ulcers of the legs was admitted to the local emergency department after she had accidentally fallen from the stairs at home. A spinal X-ray demonstrated a diffuse osteoporosis with diffuse osteopenia, collapse of L1 vertebra, with anterior vertebral wedging of L2 vertebra. The radiologist referred also about the lowering in height of L3 with irregularities of the endplates of the vertebral body. Hip X-ray demonstrated no fractures. Opioids were administered to the patient to relieve the pain, then she was admitted in the General Medicine Department. During the recovery antithrombotic prophylaxis and antalgic therapy was administered. Nine days after the admission the woman complained about a severe back pain so she was examined by an orthopedic who prescribed a prophylactic therapy for osteoporosis. Additionally he revised the spinal X-ray and prescribed a soft corset and the beginning of limited mobilization from bed to armchair. There was no indication for surgery stabilization according also with general clinical condition of the patient.

Medical conditions remained stable until 20 days after the admission, when the woman became rapidly drowsy. She had hypotension (PA 90/50), tachycardia (heart rate 134/min) and hypoxia (O2 saturation 93%) with bilateral lung crackles. Oxygen mask supplementation at 8L/min was started. Despite of the oxygen supplementation, after almost 2 hours saturation dropped to 87% and the woman became unconscious. The emergency medical services were called, finding the patient to be in PEA. They started ACLS manoeuvres and suctioned coffee-like vomitus from the airways. As there was no cardiac response, the reanimation procedures were interrupted after 25 minutes and the patient was declared dead. Despite radiological uncertainty about the presence of traumatic fractures due to the severe osteoporosis, post-mortem examination revealed a compound vertebral fracture of T8 vertebra (undetected at X-ray examination, limited to the lumbar and sacral tract) and wide anterior diastasis of the body of L1 vertebra (Figure 1), associated with vertebral fracture involving L2 and L3. There were also several rib fractures, likely produced during the ACLS manoeuvres as there were not vital signs of haemorrhages. Macroscopically lungs were voluminous and congested. Coronary arteries showed atherosclerosis, without pathological findings in cardiac sections. 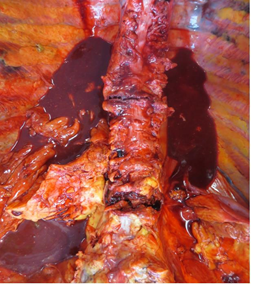 Histopathological examination of the lungs showed atelectasis and emphysema. It was observed fatty tissue and bone marrow in the pulmonary arteries (Figure 2) and an organized thrombus in a lung vessel. Examination of the heart revealed multiple foci of previous necrosis and fibrosis of the left ventricle. Based on these findings, it was concluded that the death of the patient had been caused by respiratory insufficiency due to FES associated with previous thromboembolism. 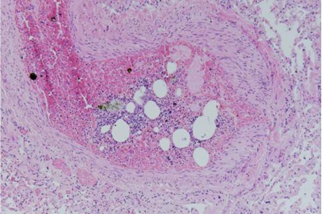 Figure 2: Histopathological examination of the lungs showing atelectasis and emphysema.

Although fat embolism is known to be associated with long bones and pelvis fractures, and orthopaedics surgical procedures such as vertebroplasty, and knee arthroplasty and intramedullary nail surgery [5-9], its occurrence in association with vertebral fractures is extremely rare, as it was previously reported only in three cases [10-12]. There are two hypothesized mechanism of fat embolism syndrome: mechanical theory [11] and biochemical theory [10, 11]. The first one typically occurs in trauma, as a result of mechanical pressure, and it is due to fat droplets released from bone marrow, which enter torn venules in the haversian canals then diffuse into the circulation and eventually obstruct vessels in many organs (lungs, brain and kidney) [11, 12].

The biochemical mechanism correlates fat embolism to the inflammatory response following the trauma, which causes free fatty acid and catecholamines release; the inflammatory mediators cause the agglutination of chylomicrons and fat macroglobules, which results in bigger fat droplets that produce capillary embolization. From a pathological prospects, the type of FES encountered in the present case corresponded to the mechanical theory, with mechanical obstruction of lung vessels by fat embolism due to vertebral fractures, probably due to fat droplets’ spreading into the circulation when the patient began to be mobilized from the bed; it was also observed an associated thromboembolism consequent to early immobilization and peripheral vascular insufficiency.

FES is clinically difficult to recognize, as it is more often thought to be subclinical. The classic presentation includes respiratory failure, petechiae and diffuse or focal cerebral disturbance [2, 3, 11]. Clinical presentation can range from subclinical to acute and dramatic respiratory insufficiency [13], with death occurring a cause of the occlusions of small pulmonary circulation and right heart failure in about 1-2% of total cases [10, 18]. Post-mortem examination of FES reveals voluminous, heavy and compact lungs, with hemorrhagic areas alternated with emphysematous ones; a possible finding is represented by skin and subpleural petechiae [19]. Histology shows fat droplets in capillaries, lung vessels, alveoli and bronchi; there could be macrophages with fat droplets inside [20]. It should be clarified that bone marrow is frequently found in lung vessels of patients with ribs fractures consequent to cardiopulmonary resuscitation. In our case it is possible to exclude that fat embolism was due to ACLS manoeuvres for the massive wide-spreading of fat droplets in pulmonary circulation and because no other findings suggest a possible cause for the acute and unexpected respiratory insufficiency responsible for the death of the patient.

According with previous literature, this is the fourth case report of fatal FES in vertebral fractures [10-12]. A comparison between the all cases is described in Table 1 where it is showed that all other patients were male with more than 60 years of age who suffered from a traumatic isolated spinal fracture, while our patient was a 74 years-old female who had serial thoracolumbar vertebral fractures and who died a long time after the trauma (20 days comparing with 14 days of Lastra et al). All patients had some cardiovascular risk factors. According with AO spine injury classification, in two cases patients had a type A fracture (compression), while one of them had a type C fracture (displacement injury). In our case the patient had several risk factors for developing fat embolism: obesity, immobilization, osteoporosis and vertebral fracture.

Table 1: A comparison between the all cases.

This is the fourth case of fatal FES in vertebral fractures reported in literature. It differs from the other case reports as our patient had FES associated with several vertebral fractures while the other had an isolated vertebral fracture and for the long period (20 days) from the trauma to death. In the majority of these fatal FES cases the type of vertebral fracture was a type A fracture (compression fracture). In this case the cause of death was found to be the association of fat embolism and not recent thromboembolism, that had likely partially occluded pulmonary circulation before the fatal event. It suggests that spinal fracture is a rare but still possible cause of FES associated to orthopedic traumatism, especially in patients with cardiovascular comorbidities. Additionally, our patient had other risk factors for developing fat embolism: obesity, osteoporosis, immobilization.

None of the authors have any potential conflict of interest.