Giant cell-rich osteosarcoma (GCRO) is a rare type of osteosarcoma, which is easily misdiagnosed as the bone size on imaging and histology of cell tumors, and GCRO in the spine is exceptionally rare. A case of GCRO confirmed by surgical pathology in our hospital is reported. 45 years old female patient with GCRO on T6 and T7 vertebra performed a surgical procedure. This study's purpose was to review the clinical presentation, imaging, pathology, and outcome of patients with giant cell-rich osteosarcoma (GCRO) of bones. A total of 18 patient’s data with our GCRO case were analyzed for this review literature.

Osteosarcoma (OS) is the most common primary malignant tumor of bone and in which neoplastic cells produce osteoid [1]. GCRO multinucleated giant cells are so obvious that these cells cover up the heteromorphic tumor cells of OS, and histological images of many uniformly distributed multinucleated osteoclast-like giant cells are similar to giant cell tumor of bone [2]. GCRO is usually misdiagnosed as a giant cell tumor of bone, as they have similar radiological and pathological features, which have seldom been reported in the literature [3-8]. Microscopic examination reveals that direct formation of the osteoid by the malignant cells is not seen in malignant giant cell tumors, and the location of giant cell tumors is present in addition to verified areas of sarcomatous stroma [9]. This may be the key factor in differentiating these two lesion types.

45 years old female, 2017 February, because of the waist pain, swelling, after rest can be relieved she was admitted to hospital for aggravation of her lower back pain months ago; and had no history of trauma.

Patient placed in supine position, physiological bending of the column on spine was found, and there was tenderness in T6 spines, while there was no palpable tenderness or knocking at other spines vertebra pain; No obvious hypoesthesia, double lower limbs muscle ? level, the straight leg raising test, and strength test negative, femoral nerve test negative, heel hip test negative, "4" word test was done. 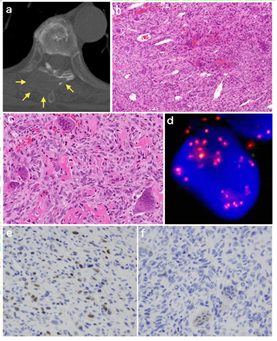 Giant cell-rich osteosarcoma is a rare type of OS, radiographic and histologically is easy to be misdiagnosed as a giant cell tumor of bone. Haslan et al. [10] calculated that the OS of the spine only accounted for the primarily 4%. Bathurst et al. [2] reported that a GCRO account for approximately all OS is 3%, but GCRO of the spine is extremely rare. OS mainly occurs in the metaphyseal and diaphysis of the long bone of the four limbs are more common in distal femur, and proximal tibia highest incidence was from 10 to 25 years old, and over 50 years old the incidence of tumors is higher in men than in women, while the ratio of primary spinal OS is approximately 1?1, the average age is slightly older, typical in the thoracolumbar spine, but also found in the cervical and sacral spine vertebra. Haslan et al. [10] collected 198 cases of primary spinal OS, including 95 cases of male and 95 cases of female, there were 103 cases of ranging in age from 8 to 80 years, with an average age of 34.5 years; There were 66 cases (33.3%) of thoracic vertebra, 64 cases (32.3%) of lumbar vertebra and 41 cases of sacral vertebra (20.7%). Schoenfeld et al. [11] collected the diagnosis of Massachusetts general hospital from 1982 to 2008 primary osteosarcoma of the spine was reported in 26 patients, including 15 males and 11 females, age 5 - 82, with an average age of 46; there were 3 cases of cervical vertebra, 6 cases of thoracic vertebra, 9 cases of lumbar vertebra and 8 cases of sacral vertebra Cases. High-risk T6 and T7 vertebral bodies are common sites of OS of the spine. Primary spinal bone sarcomas are common in the vertebral body and can affect the vertebral body alone or the pedicle and appendages. When a typical mass or "brush" tumor appears in the spinal lesion, the bone and flesh are highly considered as a tumor. Bone tumors are seen in the soft tissue near the vertebrae, especially in young peoples, and this shows that OS is possible; Compared with other benign and malignant vertebral tumors, OS often involves continuous multiple vertebral bodies [12]. The imaging shows of GCRO are similar to those of giant cell tumor of bone [6], bone destruction, soapy, osteoblastic bone destruction is rare, no fracture of bone cortex, easy to misdiagnose. Literature reports that GCRO occurs in femoral bones of young patients in the metaphyseal region of the trunk and tibia, the main imaging manifestations were lytic bone destruction, and bone destruction margin of the area is fuzzy, usually without soft tissue mass, and the periosteum reaction is not apparent [3]. Sato et al. [13] believed that the GCRO of long bone was mainly manifested as lytic bone destruction, swelling change, and bone cortical thinning, with no obvious damage. Some cases have been reported [14] in the maxillary bone GCRO, presented as an expansive heterogeneous mass with extensive destruction of the cortical bone, is intraluminal, this is a speckled calcification, misdiagnosed as chondrosarcoma. Swelling of one or more vertebrae and pedicle leads to osteolytic destruction of bone quality is rough and discontinuous, the inner edge sees the thick bone crest, the edge does not see the sclerosis edge, does not have the periosteum to reverse should be. OS of the spine does not typically have layered or scallion skin periosteum reaction and the Codman triangle makes differential diagnosis difficult.

In all reported cases (Table 1), including the cases in this study, 10 affected the femur, 4 the tibia, and others are the radius, rib, vertebra, mandible, and maxilla, respectively. A large number of cases reside in the femur and tibia, where other conventional OS and giant cell tumors are typically situated. Patients usually present non- specific clinical symptoms. The two most common chief complaints in these patients were pain (77.8%) and palpable mass (44.4%). However, the vast majority of GCROs are metaphyseal, whereas most giant cell tumors occur in the epiphysis. GCRO in these case reports showed a high recurrence nature, but our reported case is recurrence-free; 7 cases are a recurrence. GCRO should be differentiated from malignant giant cell tumor. Besides, GCRO often creates difficulty in making a diagnosis when tissue samples do not include osteoid [2, 8]. So according to comparison with other literature, authors suggest doing the surgical procedure and careful follow-up may decrease the recurrence rate of GCRO, but further study is needed to conduct about this rare tumor because only a few cases and clinical articles are published on vertebral GCRO. Thus, because of its rarity, the diagnosis of Giant cell-rich osteosarcoma (GCRO) is challenging.

The spine OS should be highly considered for the presence of typical lumpy, "brush" tumor bone in the lesion. It is challenging to differentiate spinal GCRO from spinal giant cell tumor, and pathological diagnosis is required. Our case study patient surgery was successfully done. After more than 24-months of follow-up, her tumor wasn't recurrence, but it is hard to ensure recurrence occurrence. However, the surgery not only remains a mainstay for GCRO treatment, so for this rare tumor, but the author also suggested more study is required, such as a multi-center study to provide more effective technique information for clinical diagnosis and treatment.

The authors would like to thank all who were participating in the study.

There are no conflicts of interest.

Hospital ethical committee and patient approved this manuscript for publication.

Research-informed consent was obtained from per institutional protocol.

Statement of Human and Animal Rights

The ethical standards of the responsible committee on human experimentation (institutional and national) and with the Helsinki Declaration of 1975, as revised in 2000 and 2008 were followed accordingly.