Group prenatal care support has been studied in order to increase maternal and neonatal benefits, such as breastfeeding initiation rates, in front of standard care. In our area, especially in some high risk sub-groups, it could be an important intervention to improve individual care.

Our study suggests that group prenatal care support improves breastfeeding initiation rates and some other maternal and perinatal outcomes.

Obstetrics, from the Latin “obstare” (-waiting for-), consists of controlling and attending pregnant women, fetus circumstances and childbirth. Prenatal care was first documented in Ancient Egypt (Ebers Papyrus, 1500 b.C.), but it did not have a key role until 20th century. Traditional prenatal care, understood as classical individual medical or midwife attention, has historically aimed to the antenatal time and the moment of childhood [1]. Prenatal care pretends to improve perinatal outcomes in terms of prematurity, low birth weight, screening of maternal conditions such as preeclampsia or gestational diabetes, as well as global fetal and maternal morbidity and mortality. More recently, different strategies in prenatal phase have also worked in postnatal care, as for breastfeeding initiation rates [2]. Even though the frequency, the tools and type of follow-up in low risk pregnancies remain controversial [3]. In this way, prenatal care could be particularly useful for high risk demographic sub-groups like immigrants or women with a low socio-economic status [4, 5] for who breastfeeding could be harder to implement [6].

Several strategies have been studied in order to increase the benefits of traditionalindividual prenatal care. In some vulnerable women, the effectiveness of programs as extending the number of controls, practicing telephonic support or realizing home visits have been reviewed [7]. The role of group prenatal care (GPC) has also been analyzed. Most of studies conclude that subjective perception and satisfaction of health attention, and some of the perinatal outcomes could improve with this model [8]; other authors refer it would not be worse than standard individual care (SIC) [9, 10]. According to the literature, previous meta-analysis and systematic reviews showed that the level of evidence is limited due to the lack of randomized control trials and heterogeneity of patterns of the group sessions [11, 12]. Although the evidence is scarce, some groups like the Dr Ickovics with the program Centering Pregnancy, have been working with adolescent girls, ethnical minorities and low socio-economic status groups of women with good results, especially in terms like breastfeeding initiation [13-15]. In this way, other groups working with this intervention have proposed some recommendations for the model implementation [16].

In our country, GPC was historically focused in the moment of childbirth, not in the pregnancy or post-partum phases. GPC support is nowadays understood as a complementary intervention additional to the traditional SIC at the third trimester [17]. Our institution, like other centers [18], detected a need of increasing the breastfeeding rates, especially in those vulnerable sub-groups of women who remain a high in proportion in our area [19].

The aim of this study is to compare the effect of GPC support versus only SIC on breastfeeding initiation rates and other perinatal outcomes.

We planned a retrospective cohort study.

We recorded data from all deliveries at Hospital del Mar in Barcelona from 1st of January to 31st of December 2015. The sample analyzed included 1383 women.

All pregnant women who gave birth in our center during the study period were grouped depending on whether they had received the GPC support. The sessions of GPC support were made in 10 public primary care centers in our referral zone by midwifes and consisted of weekly small group sessions (8-10 women), for women enrolled in the third trimester of pregnancy, additional to individual gynecologist monthly care. In our area, pregnant women choose to receive this intervention that midwifes offer in the first appointments. In these 1 hour sessions, midwifes conduct different issues about pregnancy, childbirth and post-partum, and all women can participate expressing doubts and opinions.

Data on maternal demographics, pregnancy and delivery were retrieved from clinical records. To compare homogeneity between both groups we included the following variables: average maternal age, gestational age and ethnicity. To compare outcomes for both groups we compared: breastfeeding initiation rates, labor stage at hospital admission, and mode of delivery and presence of episiotomy/lacerations. Prematurity rates (defined as a gestational age below 37 weeks) and low birth weight rates (defined as weight below 2500 grams) were taken into account in both groups.

We performed the statistical analysis with PAWS program 18th version (IBMR SPSSR software). Continuous variables were compared by t-Student and U Mann-Whitney. The comparisons of dichotomic variables were performed with Chi-square and exact Fisher tests. For all studies we considered the level of bilateral statistical significance at alpha type error below 0.05.

We followed the recommendations of Helsinki Declaration.

Two hundred and 7 women of the entire cohort went through GPC support during 2015 in the third trimester of pregnancy (15% of total). When comparing statistical descriptive outcomes, we found older women (31.9 years old vs. 30.4 years old, p<0.05) and a higher proportion of nulliparous women in GPC than in non-intervention group (81% vs. 40%, p<0.05). Seventy-three percent of women who received GPC were European Caucasian, and only 3% of them were South-East Asian (Pakistani, Indian and Bengali, who represent the second most frequent ethnicity in our zone); in the other side, 23.7% of women in non-intervention group were South-East Asian (p<0.05) (Figure 1). 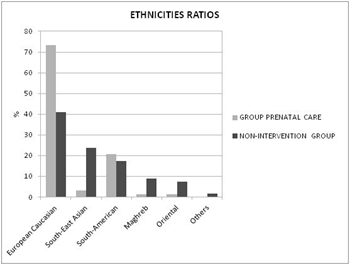 Regarding perinatal outcomes, there were several significant results in the group who received GPC support (Table 1). Breastfeeding initiation rate was higher in this cohort of women (94.2% vs. 86.7%, p=0.01). Labor stage at hospital admission, mode of delivery, and episiotomy and lacerations rates were also analyzed. There was a significant higher rate of cesarean section in non-intervention-group (22.8% vs. 20.8%, p< 0.001), which represents 28 surgeries/year more in our hospital. In GPC support, there was a 63% of need of episiotomy or tears reparation in front of 52% in non-intervention group in vaginal deliveries (p=0.001). In terms of prematurity rates (2.0% vs. 7.6%, p=0.008) and low birth weight (3.4% vs. 9.1%, p=0.01), GPC was also an improvement tool. Regarding the maternal age in the moment of the childhood, we observed less extreme ages in the GPC.

Our study supports the idea that GPC support increases breastfeeding rates after the childbirth. Almost 104 women more would initiate breastfeeding if group intervention support was carried on by all pregnant women every year in our area. The intervention has also a beneficial impact for pregnant women in some other maternal and perinatal outcomes, especially in terms of reduction of cesarean section rates, prematurity and low birth weight.

Some strength should be noted in our study. It is an annual analysis of all the deliveries, which could be a good approach to our reality. Our center, located in a high immigration area, assists several different ethnicities every day. These different cultures could translate into a very different ways to take care of the pregnancy and subjective experiences during the delivery or in the breastfeeding initiation [20], so interventions like GPC support could help them to receive the same information and to avoid problems associated to language barriers. Although our personal is well-trained and experienced in pregnant women from different cultures, more strategies should be thought to improve their maternity. The absolute results are moderate, but in our center (which consists in a medium size maternity in the country) these rates represent good improvements both for maternal and neonatal health, and in terms of hospital costs and public health system effectively.

In the same direction, there are some limitations as well. It is a retrospective study, including women who voluntarily receive GPC support, and this fact could lead to a selection bias so these women could not be representative of all the population. In GPC older, nulliparous and native pregnant women are significantly higher than in the SIC. Native women in our country are usually more informed than the immigrant ones about health practices like breastfeeding, or about the health system [21]. In this way, future prospective randomized projects in our area should be planned to clarify the benefits of the group prenatal intervention. Regarding specific details in the GPC, although the cesarean section rate is lower the instrumental vaginal delivery rate is higher, with more need of episiotomy and laceration reparations. This situation could be explained because these well-informed women could have an increased interest to get the vaginal delivery, so it could represent a specific issue to improve in the future. It was not documented if the delivery provider was a physician or a midwife, and as we know from previous research it could be interesting information.

In conclusion, GPC support improves breastfeeding initiation rates and some other maternal and perinatal outcomes in our area. More prospective randomized studies should be done to establish the benefits of this intervention during the whole pregnancy, and new strategies should be thought to arrive to all the pregnant women population.