Background: Congenital or acquired limb length discrepancy during childhood can be either treated by growth arrest or lengthening procedures. Lengthening with external fixation is usually associated with various complications. The more elegant method of bone lengthening via an intramedullary device is limited by the inner diameter of the tubular bone and the presence of open growth plates. Recently, extramedullary fixated intramedullary lengthening devices have been used off- label in children. To our knowledge, evaluation of this technique in humans as well as in animals is still pending.

Case Presentation: This study was designed to critically test a novel extramedullary fixated lengthening device at the tibia using a four months old lamb as a clinical model. The device was successfully tested for biomechanical stability up to 500 N before implantation. Although the positioning of the implant and the subsequent osteotomy went as planned, the sheep was not able to place a stable load on the leg after recovery from anesthesia. Radiological analysis and replacement of the device could not rescue leg stability so that the sheep had to be sacrificed.

Conclusions: The present case report indicates that an off-label used surgical treatment method for children with limb length discrepancy causes harmful secondary effects in lamb, which otherwise often represent preclinical subjects for human devices. Probably due to rotational load and the inability to relieve the leg, this novel extramedullary fixated lengthening device is not transferable to the anatomy of sheep.

Children with congenital or acquired limb length discrepancies often require surgical interventions to restore correct axial and length relationships. Such interventions are established in particular for the lower extremity to ensure a symmetrical gait and straight spinal development during growth [1-11]. Several surgical techniques such as a growth stop or growth modulation, acute shortening, or lengthening with external or intramedullary devices are possible for treatment of severe leg length discrepancy. With a predicted short body height, shortening procedures are unfavorable for the overall result. Bone lengthening with external fixators may cause strong cosmetic and functional impact and complications with a rate of up to 70% [2]. The alternative strategy, i.e. the use of intramedullary nails, is a particularly suitable treatment for adolescents when compared to external fixators, but their application is limited by the inner diameter of the tubular bone and by the presence of wide open growth plates, respectively [2]. Because of concerns about potential damage to the growth plate by a device crossing such sensitive structures, intramedullary nails will mainly be used in patients older than ten years.

For younger children with small intramedullary diameter and open growth plates an alternative method of using an intramedullary externally controlled lengthening device outside the bone with soft tissue coverage has been described in singular cases [12, 13]. To our knowledge this off-label application has not been scientifically evaluated in animals. There may be concerns about cantilever bending by an off-axis implant, insufficient callus formation and problematic soft tissue coverage.

As part of a German Federal Ministry of Education and Research funded project for pediatric bone reconstruction, extramedullary external lengthening of lamb tibiae were planned for evaluation of stability, callus formation and surgical problems such as tissue coverage.

In preparation for the planned surgery, implant positioning and surgical technique were practiced on sheep cadaver by implanting an externally controlled lengthening rod (MAGECâ, NuVasive, Aliso Viejo, CA, USA) with a four screw fixation (Xia screws, Stryker, Tuttlingen, Germany) (Figures 1a and 1b).

The anatomical anchorage of the implants and the coverage with soft tissue was determined. After deciding on the ideal implant position, repetitive biomechanical testing of 100.000 cycles each at 100N, 200N, 300N, 400N and 500N was performed (Instron 8874, ÜWA 090000-0000-041) with respect to the corresponding anatomical angles, the proper stability of the implant and its breaking strength (Figure 2). No implant or long bone impairment was seen between 100N and 400N. At 500N a plastic deformity of the bone without implant failure was noted.

After obtaining permission for the study according to the German Animal Welfare Act (approval number: 33.19-42502-04-18/2791), eight healthy immature four months old lambs from the rare breed of “Leineschaf” were transferred from the institutional experimental farm Relliehausen to the Central Animal Experimental Facility of the University Medical Center of Goettingen. After a sufficient acclimatization phase, no food was given twelve hours prior to surgery, but free access to water was provided. Anesthesia was performed using propofol (propofol Lipuro 2%, 15 mg/kg), isoflurane (1.5%) and fentanyl (10 µg/kg). After sheep positioning, radiological evaluation, shaving, multiple disinfections and sterile draping, a small distal tibial incision was performed and two distal screws were placed dorsally in order to provide the best soft tissue coverage. A second proximal incision was done for proximal screw placement (Figures 3a, 3b). 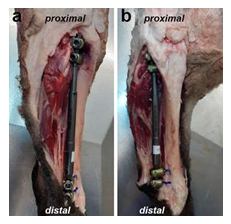 Figure 1: Anatomical preparation of a sheep cadaver with development of the surgical technique. (a) lateral and (b) anterior-posterior view. 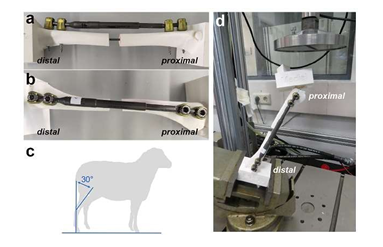 Figure 2: After biomechanical testing of the implants, the implant construct proved to be sufficiently stable for the experimental project. (a-b) Mounting on 3D printed sheep tibia modelled after CT images with Xia screws, magnetic implant and intramedullary K-wire; (c) At the same angle as the standing sheep tibia. d: the construct was clamped and checked for load.

Figure 3: Course of the operation. (a) Overview of the stored sheep and (b) skin incisions with implants; (c) Osteotomy site marked with an arrow; (d) Clinical situation after wound closure; (e) Radiographs in anterior-posterior and (f) lateral projection after surgical treatment; (g) Malrotation of the hind leg.

All screw holes were pre-drilled using a 3.5 drill and 4.5mm screws with bi-cortical fixation. Soft tissue was tunneled and the shortened magnetically controlled device was inserted after prior testing of functionality. The lengthening device was removed and an osteotomy was performed 2 cm proximal of the distal screws with pre-drilling 2 mm holes and then cross-chiseling the bone after inserting blunt Homann-hooks to protect the surrounding tissue (Figure 3c). An additional intramedullary K-wire was inserted for maintaining the correct axis. The externally controlled lengthening device was reinserted and all screws were tightened. A layered wound closure was done using resorbable, intracutaneous sutures (Figure 3d). Finally, radiological exams were performed (Figure 3e, 3f) for documentation. Total surgical time was approximately 90 minutes. After the sheep recovered from anesthesia, upon the first try to stand up the operated leg underwent a twisting without any discernible cause (Figure 3g). The sheep was immediately re-anesthetized. Radiological analysis revealed no implant or bone breakage, but rotation of the implant was clearly shown. To rule out defective or unattached metal parts, visual inspection was surgically done without any abnormal findings. As a precaution, repositioning of the distal anchorage with two new screws, replacement of the magnetic implant and insertion of a new and additional intramedullary K- wire was performed. Manual rotation testing did not reveal any instability. Nevertheless, after waking up, the sheep was not able to stand with weight on the operated leg, which uncontrollable rotated again. To prevent the animal from suffering, it had to be sacrificed.

Limb length discrepancy is a common problem in humans, which may lead to surgical intervention during childhood [1-11]. Because of multiple problems associated with external long-bone distraction osteogenesis, intramedullary externally controlled lengthening devices have become increasingly popular for both long-bone distraction osteogenesis and spinal deformity correction in children [2, 14, 15]. However, devices had issues with rate control, pain management, and bone formation [12]. In order to resolve problems with small intramedullary bone diameter and open growth plates, some authors have used an extramedullary fixated intramedullary lengthening nail with tunneled soft tissue coverage off- label in children [12, 13]. The aim of the planned study was to evaluate this technique in breeder animals, such as sheep, as a preclinical subject for deformity correction in children. Analysis of in vivo implant loading and callus formation were planned.

Even though implant construction on saw-bone went through successful biomechanical testing up to 400N, this did not prevent failure of bone stability in sheep. Reasons may be evaluation of axial loading instead of a combination with rotational forces, which apply if the sheep stands up, or higher loading than 400N in vivo. A recent study by Gaudreau et al. [16] successfully tested a remote-controlled lengthening plate for children with up to 735N. To rule out implant or bone failure, radiographic analysis and surgical re-evalutation was performed. Both of them were without pathological finding. Usually, an eight-point cortical fixation in pediatric osteosynthesis is sufficient. However, this technique did not result in sufficient stability most likely because of a different lever in sheep tibiae in comparison to pediatric bones. A higher number of screws for fixation and/or different implants were not possible in sheep because of limited anatomical size. Even though this report bases on an individual case, it can be concluded that extramedullary lengthening devices in pediatric sheep with an eight-point cortical fixation cannot be used as a preclinical model in children.

Conclusively, the present case report indicates that an off-label used surgical treatment method for children with limb length discrepancy causes harmful secondary effects in lamb, which otherwise often represent preclinical subjects for human devices. Probably due to rotational load and the inability to relieve the leg, this novel extramedullary fixated lengthening device is not transferable to the anatomy of sheep.

Ethics approval and consent to publication

The present study was approved by the ethics committee of the Lower Saxony State Office for Consumer Protection and Food Safety (approval number: 33.19-42502-04-18/2791).

Availability of Data and Material

All data generated or analyzed during this study are included in this published article.

The authors declare that they have no financial and non- financial conflict of interest.

This research was funded by the German Federal Ministry of Education and Research (BMBF) (13GW0302B).