Intestinal polyparasitism represents a public health problem. It is more prevalent in developing countries like Mexico and children are the most affected. It has been associated with several factors, including the number of family members. However, intestinal polyparasitism in the family is underestimated. After explanation of the study and informed consent, the family was invited to provide three stool samples which were analyzed by direct and concentration methods as well as methods such as Graham and Kato Katz. The prevalence of intestinal polyparasitism in the family was 100%. The protozoa and helminths identified were: Entamoeba histolytica/Entamoeba dispar /Entamoeba moshkovskii, Blastocystis spp, Endolimax nana, Entamoeba coli, Ascaris lumbricoides y Enterobius vermicularis. The father and one of the children presented 6 parasites. The 5 year-old children presented severe infection by Ascaris lumbricoides, with 68,436 eggs per gram of faeces. Most of the participants reported more than two gastrointestinal symptoms. A morphological diversity of the Ascaris lumbricoides eggs were found in the family. The differentiation between infertile eggs of this helminth and detritus transcends for a reliable diagnosis. This case of familial intestinal polyparasitism shows the need for the timely diagnosis of intestinal parasitosis for specific treatment and the prevention of complications as well as for implementation of health education.

We present the case of a family with intestinal polyparasitism, including a 30-year-old father working as a mason, a 29-year-old housewife mother and their four children. The family lived in a home consisting of one room and one bathroom with no flushing toilet. The home had a sheet metal roof, dirt floors and adobe walls. It had electricity and running water. With prior written informed consent, stool samples were requested from the family. They were analysed using direct coproparasitoscopic methods with Lugol’s solution, concentration methods with zinc sulfate and formalin-ethyl acetate, the Kato-Katz technique to estimate the severity of infection by A. lumbricoides and the Graham method for E. vermicularis for diagnosis in children [10] Figure 1.

The family members, their age, symptoms and the parasites identified in each are shown in (Table 1). After diagnosis, the adults were treated with nitazoxanide (500 mg) + mebendazole (167 mg) + quinfamide (767 mg) in a single dose per day. The children were referred to the health centre of their community for clinical evaluation and treatment in case necessary. 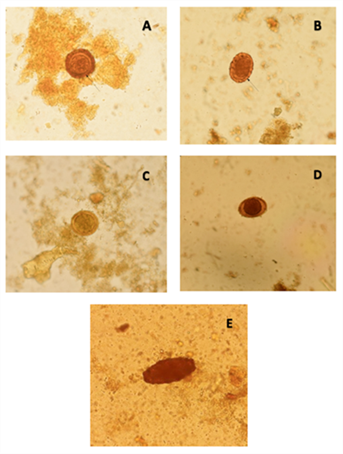 Figure 1: Morphological diversity of A. lumbricoides eggs observed by the direct Lugol’s solution method (40 X). (A) Round egg with an outer cover; (B) Oval egg with an outer cover. The arrows in A and B indicate the presence of an albuminoid outer layer with a wavy and irregular appearance; (C) Round decorticated egg; D) Oval decorticated egg. The lack of an outer layer is due to prolonged exposure to pancreatic secretions; (E) Infertile egg with an external cover.

Table 1: Polyparasitism in the members of the family studied.

**E. vermicularis was found by direct examination with Lugol’s solution in the father and by the Graham method in the children.

Epidemiological studies that report intestinal polyparasitism have been performed [3, 5]. However, we present the case where all the members of the family were parasitized. Number of family members have been associated with intestinal parasites in children [6]. In our case, the father and son presented up to six parasites y the family members reported having several gastrointestinal symptoms at the time of the study. Protozoa and helminths were diagnosed.

The father was who reported signs and symptoms suggestive of amebiasis. Particularly, in endemic countries like Mexico, this criterion is useful for making a clinical diagnosis. Furthermore, microscopy represents a valuable tool because it is considered the gold standard. However, to differentiate between the species of the genus Entamoeba the Multiplex real-time PCR can be used [11]. This method was not applied in the present case, representing a limitation because the clinical manifestations of amoebic infection by E. histolytica vary from asymptomatic to severe symptoms, such as dysentery and extraintestinal abscesses, whereas E. dispar, E. moshkovskii and are unable to cause invasive disease; therefore, they do not require treatment [12, 13]. In the present case of familial polyparasitism, Blastocystis spp. were diagnosed in all family members. Other authors have reported high prevalence of this microorganism. The most common symptoms associated with this microorganism are nausea, loss of appetite, abdominal distention and pain, flatulence, acute or chronic diarrhoea and irritable colon [14].

Adults of Ascaris lumbricoides in the small intestine causes nausea, vomiting, discomfort, pain epigastric. Of the six family members, five were diagnosed with A. lumbricoides. The parents and the 9-year-old child presented mild infection with counts lower than 5,000 eggs per gram of faeces (epg). Severe infections were found in the other two parasitised children aged 7 and 5 years, with 50,376 and 68,436 epg, respectively. Knowing the epg value is important because moderate to severe infections may result in impaired digestion and malabsorption of protein, lactose, some fat-soluble vitamins and therefore malnutrition in children [16]. On the other hand, the probability of intestinal obstruction is related to the intensity of the infection [17]. A. lumbricoides eggs proliferate more intensively in children ranging in age from 5 to 10 years, decreasing dramatically without disappearing in adults [18]. This coincides with what was presented in this case, where the highest counts per gram of stool were in children aged 5 and 7 with respect to their parents who had mild to moderate infections. A morphological diversity of the A.lumbricoides eggs was observed. It is important to distinguish between different types of eggs so as not to confuse an infertile egg with an artefact as well as to apply the appropriate methods for correct diagnosis. For example, infertile eggs do not float with the zinc sulfate solutions used to concentrate the parasitic stages [10]. This information is important because when egg counting is done, both types of eggs should be considered [Figure 1].

This case of familial polyparasitism shows the various socioeconomic and hygienic factors that combined to favour conditions conducive to acquisition of up to six parasites. It is necessary to implement health education programmes that emphasise hygiene habits, especially hand washing, as well as timely and proper diagnosis and treatment of the entire family to prevent spread not only among the family but also in schools.