Results: The Hi was 25 & 26 in CP and severe brain damage, while 20-24 in abnormal FHR but neither brain damage nor cerebral palsy with significant differences. Thus, a numeric threshold in HI to develop cerebral palsy was 25, and the safe HI is 24 or less. The CP will be prevented by the early delivery when the HI is less than 25.

Discussion: As HI was 6 in 3 connected LD while HI was 26 after 50 min’s LD repetition, the outcome depends on the repetition, but not to the LD pattern, and all of early, late, variable decelerations and continuous fetal bradycardia are evaluated by HI, namely, HI decides outcome, instead of deceleration pattern, where outcome is digitally diagnosed using numeric HI.

Conclusion: HI covers the role of all decelerations, while FHR pattern was discarded in computerized FHR diagnosis.

As the fetus is covered by amniotic fluid, uterine muscle, and maternal abdominal wall, its medical study was almost impossible in the past, where mother’s perception of fetal movement and enlarging abdomen were the subjects to estimate fetal well- being. Stethoscopic auscultation was introduced to listen to fetal heart sound after 20 weeks pregnancy. The author started his medical engineering from maternal electroencphaogram [1] and neonatal respirogram [2].

Hon’s EFM prepared the combination of fast FECG recorder with FHR+intrauterine pressure on the slow chart recorder. Caldeyro-Barcia, recorded FECG & fetal heart rate with a needle electrode through abdominal wall, with uterine contraction by intramyo- metrial pressure, and found Type 1 and 2 dips in fetal heart rate, where Type 2 dip was the same as Hon’s late deceleration. Type 2 developing mechanism was the compression of iliac arteries with acontracted pregnant uterus, resulting the los of maternal blood flow through placenta, which was confirmed by pelvic arterial angiography, while Hon reported the LD simply as placental insufficiency.

Hammacher K, Germany, used Kardio-toko-gram composed of a fetal phonographic microphone to record FHR curve and external tokodynamometer without membrane rupture in pregnancy. Pattern classification was similar to two pioneers, but he emphasized FHRbaseline variability, of which loss was “silent”, which was severely abnormal FHR.

Maeda’s Asia first fetal monitor was an cardio- tocogram which use a microphone or scalp electrode, amniotic pressure or guard-ring type exernal tocodynamoeter, namely external FHR monitoring was possible for the diagnosis in pregnancy.

However, the FHR deceleration classification with visual recognition into periodic and variable changes followed by early, late and variable decelerations [6] were subjective resulting vague decision and inter-observer difference, and also the pattern classification was difficult to explain developmental mechanism of FHR changes, e.g. no physiologic sinusoidal pattern was separated from pathologic one, the origin of heart rate variability was vague, variable decelerations were explained by nervous reflex in mild deceleration and hypoxia in severe variable one, i.e. they were explained by two different principles.

Firstly, the FHR change was analyzed into composd elements, including the baseline FHR (mean of the most FHR data in every 10 bpm steps), amplitude of long term variability, number of decelerations in 5 min, duration of every deceleration, every amplitude, every nadir heart rate, every lag time from the contraction peak, every recovery time to the baseline, presence of acceleration accompanied the deceleration (Figure 1), percentage of Apgar score lower than 7 in the parameter, and each evaluation score 1-4 determined by the percentage of lower Apgar score than 7 in the statistics of births. All evaluation scores were summarized in the 5 minutes to achieve FHR score in the 5 minutes.

Figure 1: Each deceleration and FHR baseline were analyzed by quantitative data. It looks troublesome, but it is easy in computerized determination.

The FHR score and expected abnormal Apgar score and UApH calculated by regression equations were obtained and reported attending doctor directly and rapidly in case of computerized FHR monitoring.

Fetal outcome was expected by the application of regression equations calculated between FHR score and neonatal Apgar score and UApH. ( Apgar score was calculated by the equation of hypoxia index and Apgr score too). The results are reported doctors directly and quickly by cell phone or LAN with technical as well as clinical terms, e.g. FHR score and Apgar score (Table 2).Thus, electronic data was changed to medical terms to a quick understanding of doctor to facilitate clinical correspondence in the decision of treatment in the busy obstetric works. The electronic to medical conversion was tried.

2.3 Actocardiogram (ACG)
Fetal movement was recorded with spikes, fetal heart rate (FHR) and uterine contraction on the ACG [9] (Figure 2), in which FHR changed by fetal movements via fetal brain function, thus, various problems of CTG were solved, e.g. FHR acceleration was provoked by fetal movements (Figure 2), thus, the loss of acceleration was early sign of hypoxia, physiologic sinusoidal heart rate was separated from pathologic one by its synchronization to periodically changing movements [10], and FHR variability (LTV) was provoked by minor fetal movements due to fetal brain function, therefore, the loss of variability was the sign of fetal brain damage [11,12]. As an actocardiograph records uterine contraction at the same time, the machine is acto-cardio-toco-graph, namely, the device can be used as an actocardiogram and also cardiotocogram according to the intention of its user. 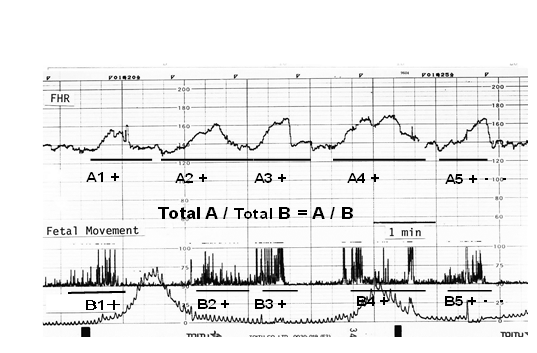 Figure 2: Triangular FHR accelerations were associated with the clusters of fetal movement spikes (movement bursts) in active fetal state. FHR acceleration duration (the sum of A) ratio to the movement duration (sum of B) is the A/B ratio, which predicts fetal outcome [16].

FHR changes were provoked by the reaction of fetal mid- brain to fetal movement with 7 sec delay due to the presence of integral circuit function of the brain, which were proved by electronic and physiologic simulations. The acceleration was lost in early hypoxic state preserving FHR variability. The variability was lost by the most severe hypoxia forming totally flat baseline such as that of fetal anencephaly, i.e. the loss of variability indicated the severe fetal brain damage, followed by cerebral palsy.

Therefore, the fetus is recommended to deliver before the loss of variability [12] which were preceded by the loss of acceleration and decreased variability. Severe bradycardia, and high FHR score are also the sign to precedes brain damage, and high Hypoxia Index higher than 24 indicate severe fetal brain damage followed by cerebral palsy. Thus, neonatal brain damage followed by cerebral palsy will be prevented by the early C-delivery before the loss of variability [11,12] which will be preceded by high hypoxic index of 25 or more. The decrease of neonatal CP before introduction oh hypoxia index will be explained by early caesarean delivery decided by a severe FHR change in fetal monitoring. However, there will be no CP if the HI is lower than 24 at delivery at present.
Physiologic sinusoidal FHR is separated from pathologic ominous sinusoidal, if the sinusoidal FHR change is synchronized with the periodic changes of fetal movements, which was mainly fetal respiratory movements [10].

Fetal hiccupping movements are continuously repeated sharp spikes with 2 sec intervals for more than 10 min, which did not accompany FHR acceleration, while there was no hypoxia, because it is an independent convulsive diaphragmatic actions without fetal brain control. It is proved by continuous sharp spikes with 2 sec intervals without formation of movement burst, but only continuous fetal movements with 2 sec intervals in app.10 minutes (Figure 3). Further to accurate diagnosis of fetal hiccupping will be done by real-time ultrasound B-mode imaging, where the fetal body suddenly extends within half second and repeats the sharp motion every 2 sec continuously for 10 minutes. That is very characteristic show if compared the other fetal movements. 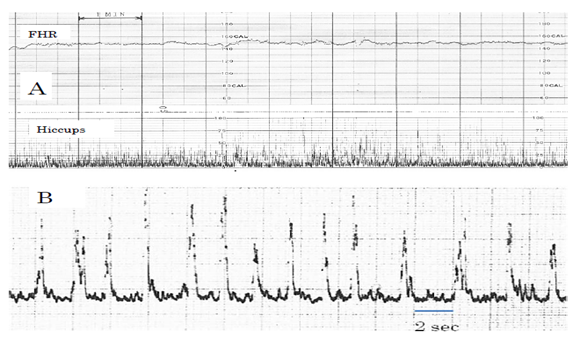 It was a controversy that fetal outcome was favorable after 3 connected late decelerations (LDs), though it is reported that LD is ominous [6], while highly repeated LDs lost variability, Apgar score was 3, and the infant was severe brain damage in the author’s experience. In addition, LD is defined after the repetition for 15 min in some reports It may mean that the LD must be defined after 6 decelerations, if the deceleration appears twice in 5 minutes, namely, LD is evaluated after repetition of 6 decelerations, namely, repetition is important in LD.

Thus, the author estimated that the hypoxia damages the fetus when the sum of deceleration is large, namely, hypoxic effect of 3 decelerations is too weak to be hazardous. Thus, the sum of duration (min) of decelerations was divided by the lowest nadir FHR (bpm), which is the intensity of hypoxia, then multiplied by 100, where the hypoxia index is obtained, where a deceleration will be the same as the dip area. The heart rate is used instead of PaO2, because rabbit PaO2 closely correlates heart rate when the PaO2 is lower than 50mmHg [3], and human fetal PaO2 is less than 50 mmHg [4]. Thus, completed Hypoxia Index is as follows;

The HI was measured in cases of the loss of variability followed by fetal brain damage and cerebral palsy, to determine the threshold to develop cerebral palsy (CP), where HI was 25 in a case of the loss of variability followed by CP, and 26 in repeated LD for 50 min, whose Apgar was 3, and the 3 month infant died in brain hemorrhage. Thus, upper limit of HI not to be cerebral palsy is lower than 25. Actually, the HI was 20 to 24, smaller than 25, in cases of abnormal FHR, who associated neither the loss of variability nor cerebral palsy (Table 3). Therefore, HI should be lower than 25 at delivery to prevent cerebral palsy [11, 12]. Also, the problem of controversy LD will be solved, because the authors case of three connected LDs’ HI was 6 and the A/B ratio was 1.3 (larger than 1.0) which was normal range, and its Apgar score was 9, while the outcome was ominous when the deceleration was repeated 50 min to increase HI to 26, thus, deceleration durations are summarized in HI.

Table 3: There was a significant difference in the Chi square test of two hypoxia index groups.

2.6 Fetal brain damages in preterm birth infants
Yamamoto et al reported the periventricular echo density (PVE) in preterm fetuses, which was highly echogenic periventricular zone in B-mode diagnosed by high GLHW, and 18 % of the PVE turned into neonatal brain PVL followed by CP, when the PVE lasted during pregnancy until preterm delivery [13].

Two strategies are proposed to prevent the brain damage; 1) Since neither PVL nor CP was found in neonates after full term birth [13], the pregnancy is prolonged until term birth by any effective tocolysis, one of which will be pharmaceutical, and another will be the sedation of uterus-brain nerve in the positive feed-back loop of labor contraction by anesthetic procedure [15].

2) As the PVE lasted until preterm delivery, PVE will be found in the neonatal brain immediately after preterm birth, which is detected by ultrasound in preterm neonate, then detected PVE will be treated before the change into PVL, namely, such neonatal brain repairing material as the growth factor will be administered to the case of neonatal PVE, because the growth factor disappeared within 3-4 days after birth in normal neonates. The proposals will be heavily studied in the future before practical application.

FHR score was calculated manually in 1969, while mainly computerized calculation was common in the present.

The doctor will decide early delivery according to expected Apgar score and pH.

3.2 Actocardiogram
Developing a mechanism of normal and pathological FHR changes were clarified by the analysis of actocardiogram, particularly, FHR acceleration, variability and their pathologic changes in hypoxia, namely, acceleration and variability are the reaction of the fetal brain to fetal movements, thus, their disappearance means the suppression or damage of fetal brain due to hypoxia, and the fetus is cured by early delivery before the loss of variability. A physiologic sinusoidal FHR is differentiated from pathologic one, the progress of fetal hypoxic damage is predicted by hypoxia index, and fetal behavior is known by actocardiogram.

Intrapartum hypoxic fetal brain damage followed by cerebral palsy will be detected and prevented by the application of novel hypoxia index, instead of subjective FHR pattern classification. Numeric analysis of FHR changes, including FHR score, baseline variability, sinusoidal FHR, hypoxia index and so on will be incorporated in FHR analyzing computer.