Conversion of glycerol, a by-product of biodiesel production, into value-added materials increases the cost-effectiveness of biodiesel production. Purple nonsulfur photosynthetic bacteria (PNSB) are microorganisms that have been safely applied to various fields, such as agriculture, aquaculture, dairy farming, wastewater treatment, fine chemical production, and bioenergy production. The use of PNSB that efficiently assimilate glycerol is a promising approach to the value-added utilization of glycerol. In this study, we isolated 40 PNSB strains from seashore sediment, and examined their abilities in assimilate glycerol. One strain grew well with glycerol as a sole carbon source, and this strain was designated Rhodovulum sulfidophilum OKHT16 based on its 16S rRNA sequence. R. sulfidophilum OKHT16 showed the highest growth rate between 37 °C and 40 °C with a doubling time of 72 minutes, and the thermo-tolerance of this strain was up to 48 °C.

Biodiesel production has increased rapidly in the last decade, resulting in a surplus of glycerol, a by-product of this process [1]. Technologies for the conversion of glycerol into value-added materials are, therefore, important for economically feasible biodiesel production, and there have been many studies on chemical [2] and biological [3-4] processes for value-added glycerol utilization.

Purple nonsulfur photosynthetic bacteria (PNSB), constituting a non-taxonomic group of versatile organisms, generally grow photoheterotrophically by anoxygenic photosynthesis, although some of them can also grow photoautotrophically or chemoheterotrophically [5]. Most PNSB are nonpathogenic, and they have been applied to many fields [6], such as agriculture [7], stock raising [8], aquaculture [9-10], wastewater treatment [11- 12], bioremediation [13-14], bioactive compound production [15-16], and hydrogen energy production [17-18]. Thus the use of PNSB that efficiently assimilate glycerol is a promising approach to the value-added utilization of glycerol, but there has been only a few studies on glycerol assimilating PNSB, and the strains were limited to terrestrial (freshwater) strains [19-20]. In this study we isolated 40 PNSB strains from seashore sediment, and examined their abilities in assimilate glycerol.

Glutamate malate (GM) medium with 3% NaCl was used to isolate PNSB from seashore sediment samples. The components of the GM medium included 3.8 g (22 mM) sodium glutamate, 2.7 g (14 mM) sodium DL-malate, 2.0 g yeast extract, 0.5 g KH2PO4, 0.5 g K2HPO4, 0.8 g (NH4) 2HPO4, 0.2 g MgSO4.7H2O, 0.053 g CaCl2.2H2O, 0.0012 g MnSO4·5H2O, 5 mg nicotinic acid, 5 mg thiamine hydrochloride, 5 mg biotin, and deionized water up to 1,000 ml. The pH was adjusted to 6.8. For the isolation of PNSB strains, about 0.1 g of sediment sample was inoculated into 10 ml of GM medium with 3% NaCl in a test tube, and cultured at room temperature under continuous light with incandescent lamps (light intensity ca. 100 mM photon/sec/m2) for 7 to 14 days. After the appearance of purple, pink, red, or brown colors in the culture, the culture broth was streaked onto a GM agar plate containing 3% NaCl, and cultured under the same conditions. Streak cultures were repeated until pure monocultures of PNSB strains were obtained.

To screen PNSB strains, the carbon sources in the GM medium (glutamate, malate, and yeast extract) were replaced with 5 g/L (54 mM) of glycerol. A loopful of inoculum from the liquid culture stocks of 40 PNSB strains was inoculated into 3 ml of the medium in a test tube, and cultured under dark and aerobic conditions with shaking (80 rpm) for 7 days. Growth of the cells was measured at an optimal density of 660 (OD660). Glycerol concentrations in the medium were determined with F-kit glycerol (Roche Diagnostics).

Identification of PNSB strains based on 16S rRNA sequences

Total DNA was extracted from the PNSB cells with Instagene Matrix (Bio-Rad, Hercules, CA, USA) according to the manufacturer's instructions. The 16S rRNA sequences of the PNSB were amplified by PCR using genomic DNA as the template and primers 8F (5′-AGAGTTTGATCCTGGCTCAG- 3′) and 1492R (5′-GGTTACCTTGTTACGACTT-3′). DNA sequences were analyzed using a commercial DNA sequence analysis service (Eurofins Genomics Inc., Tokyo, Japan). A homology search of 16S rRNA sequences was performed using the BLAST program. The GenBank/EMBL/DDBJ accession number for the 16S rRNA gene sequences of Rhodovulum sulfidophilum OKHT16 is LC037397.

There have been several reports on glycerol assimilating PNSB strains, but no report on marine PNSB strain. To isolate marine PNSB strains that efficiently assimilate glycerol, 40 PNSB strains (strain numbers 1 to 40) were isolated from the seashore sediment samples collected from the Osaka Bay area in Japan and were purified to monocultures. These 40 PNSB strains were then grown in basal media containing 5 g/L (54 mM) glycerol as the sole carbon source. Figure 1 shows the results. The freshwater PNSB Rhodobacter sphaeroides strain S, which assimilates glycerol well [20], was used as a reference strain. Among the 40 PNSB strains, numbers 16 and 13 showed growth rates comparable to that of Rhodobacter sphaeroides strain S. The 16S rRNA sequences of these strains were determined, and a DNA database search revealed that the sequences of both strains showed 100% identity to Rhodovulum sulfidophilum strain P5 (GenBank accession no. JF794560) and Rhodovulum sp. MB263 (GenBank accession no. D32246). We designated our strains Rhodovulum sulfidophilum strains OKHT13 and OKHT16. These strains were isolated from sediment samples collected from the same sampling site, and we assumed these strains might be identical strains. Therefore, detailed investigations were carried out only with R. sulfidophilum OKHT16. Generally glycerol is not a good carbon source for the cultures of microorganisms. As shown in Figure 1, the majority of PNSB strains isolated in the present study showed quite low ability in glycerol assimilation. One of the main metabolic pathways for glycerol is phosphorylation of glycerol to glycerol-3-phosphate (G3P) by glycerol kinase, and then dehydrogenation of G3P to dihydroxyacetone phosphate (DHAP) by G3P-dehydrogenase. DHAP is metabolized through the pentose phosphate pathway (PPP). One possible reason for the low ability in glycerol assimilation observed among some kinds of microorganisms including PNSB is supposed to be the low enzymatic activity of glycerol kinase [21-22]. 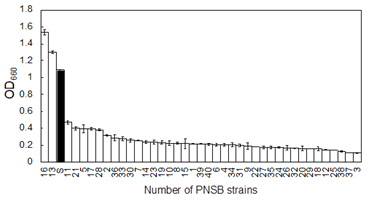 Figure 1:  Assimilation of glycerol by 40 PNSB strains isolated from seashore sediment in Japan

The PNSB cells were cultured in GM medium containing 5 g/L of glycerol as a sole carbon source under dark and aerobic conditions for 7 days. The growth of the reference strain, Rhodobacter sphaeroides strain S which well assimilates glycerol [20], is indicated as the black bar. Data are means + SD (n = 3).

The cells of R. sulfidophilum OKHT16 were cultured in GM medium containing 0.5, 1.0, 2.5, or 5.0 g/L of glycerol under light and aerobic conditions for 5 days. The assimilation ability is shown as percent of the assimilated glycerol. Data are means + SD (n = 3). 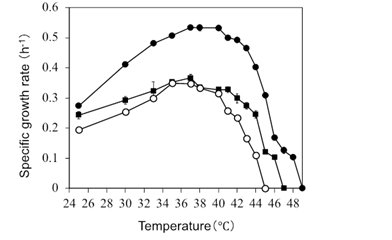 Rhodovulum sulfidophilum OKHT16 isolated in the present study is the first example of marine PNSB with a high ability of glycerol assimilation. This strain shows a high growth rate (doubling time: 72 min) at high temperature (37 °C to 40 °C), and also tolerates higher temperature (up to 48 °C).

Disclosure of potential conflicts of interest

The authors declare that they have no conflict of interest.