Journal of Analytical Techniques and Research

# These authors contributed equally to this work

Resveratrol is a polyphenol derived from a variety of food and beverages, which has been reported to possess diverse pharmacological activities. An ultra-high performance liquid chromatography/quadrupole time-of-flight mass spectrometry (UPLC-Q-TOF/MS) method was established to figure out the metabolic profiles of resveratrol in rat biological samples after oral administration. According to the results, 21 resveratrol-related metabolites in rat biosamples were found after oral administration. As far as we know, 14 of these metabolites (M3 to M10, M13, M16, M17 and M21) have not been reported previously. Furthermore, glucuronide conjugation, sulfate conjugation, methylation, hydroxylation and reduction were the main metabolic pathways. Besides, the hydroxylated product was also detected in rat liver microsome. The results may be conducive to a better understanding the metabolic mechanism of resveratrol and provide helpful chemical information for further pharmacological and action mechanism studies of resveratrol.

Resveratrol, a polyphenol compound occurred naturally in nuts, berries, and the skin of grapes [1]. Since 1940, resveratrol has caused considerable interest in the medical community due to its ability to protect against a variety of diseases, including diabetes, cardiovascular disease, cancers [2] and so on.

Metabolic researches play a crucial role in drug discovery and development [6]. With the aid of the metabolynx™ software, UPLC-Q-TOF/MS has been widely applied in the screening and identifying of the unknown compounds or their metabolites in biological samples [7]. In this study, a quick and credible UPLC-Q-TOF/MS method was developed to profile and identify the major metabolites of resveratrol in rat urine, plasma, bile and feces after oral administration of resveratrol.

Male SD rats (200~220 g, SPF grade) were obtained from the national quality inspection center of experimental animal (Beijing, China; Certificate No. SCXK 2017-0005). All animals were housed under standard conditions for a week. The study strictly adheres to the Regulations of Experimental Animal Administration. Before drug administration, the rats were fed in metabolic cages for 12 h. Resveratrol was orally administered at a dose of 50 mg/kg with normal saline as the vehicle.

The bile sample (2 mL) or urine sample (5 mL) was loaded onto a C18 SPE (500 mg) column, and washed with 5 mL ultra-pure water and then 5 mL methanol. The methanol eluent was dried under nitrogen gas at room temperature. The feces sample (1g) was added into 10 mL methanol with ultrasonic treatment for 1 h and subsequently centrifuged for 10 min. The supernatant was separated and dried with nitrogen gas at room temperature. Plasma samples obtained from different time points were combined. An aliquot of 6 mL acetonitrile was added to 2 mL of plasma samples and vortex mixed for 3 min to precipitate proteins. Then, the precipitated protein was removed by centrifuging and the supernatant was dried under nitrogen gas at room temperature. Residue was dissolved with 0.3 mL of methanol-water (1:1, v/v), vortexed and thoroughly mixed, centrifuged at 17,460 Í g for 10 minutes, finally, 200 μL of the supernatant was taken out for analysis.

The incubation mixture contained rat liver microsomes (0.2 mg/mL), potassium phosphate buffer (100 mM, pH 7.4), MgCl2 (5 mM) and resveratrol (100 µM). The final volume of the incubation system was 200 µL. Resveratrol was previously dissolved in 60% methanol aqueous solution at concentration of 10 mM as stock solution. An aliquot of 2 µL stock solution was added into the microsomal incubation system to obtain a final concentration of resveratrol at 100 µM and the total amount of organic solvent in the system was not over 1%. Microsomal mixtures were incubated at 37°C in an intelligent temperature metal bath with and without combinations of 1 mM NADPH. After 60 minutes of incubation, the reaction was terminated by adding 0.6 mL of ice-methanol to the system, and then the sample was centrifuged for 10 minutes at 4°C, and 200 μL supernatant was taken out and then injected into a UPLC for analysis.

The UPLC-Q-TOF/MS system was conducted on an ACQUITYTM UPLC I-Class system and a Xevo G2-S Q-TOF mass spectrometer interface (Waters, Milford, USA). The chromatographic separation was carried out on an ACQUITY UPLC BEH C18 column (2.1Í100 mm, 1.7 μm). The eluent was directly introduced into the mass spectrometry. The mobile phase consisting of 0.1% formic acid aqueous solution (A) and 0.1% formic acid acetonitrile solution (B) was delivered using a linear gradient program showed below: 5–10% B from 0 to 2 min, 10–30% B from 2 to 6 min, 50–85% B from 12 to 18 min and 85–95% B from 18 to 20 min. The optimal conditions of analysis were employed showed below: capillary voltage was 3.0 kV; extraction cone voltage was 3.0 V; sampling cone voltage was 40 V; desolvation temperature was 400°C; source temperature was 100°C; cone gas flow was 50 L/h; desolvation gas flow was 600 L/h. In MSE mode, trap collision energy of low-energy function was set at 0 eV, while the ramp trap collision energy of high-energy function was set at 15–60 eV. In MS/MS mode, the samples were detected at the collision energy of 20 eV. Data in centroid mode were from 50 to 1000 Da. All data were collected and processed by Metabolynx XS software under the Masslynx V4.1 (Waters, Milford, USA) operating interface.

This paper reported the metabolites of resveratrol. Firstly, the full scan mass spectra of biological samples were obtained (Figure 1). Secondly, the molecular formula of resveratrol (C14H12O3) used as the parent compound was put into the Metabolynx XS software. The element composition and elemental limits of possible substituents were determined by potential metabolic reactions (sulfate conjugation, glucuronide conjugation, methylation and hydroxylated et al.). Thirdly, the metabolites were screened, identified and affirmed by comparing the retention times, MS2 fragments with those of the reference materials or reported in the published literatures. Additionally, Clog P (calculated logarithm of its partition coefficient between n-octanol and water) values for several isomers were obtained from ChemDraw (version 12.0) and applied as important parameters for the identification of metabolites as reported [8]. Finally, 21 major metabolites were identified in rat biological samples (Table 1). The proposed metabolic pathways of resveratrol were shown in Figure 2. According to our results, resveratrol was able to underwent reduction, hydroxylation and methylation metabolism in rats. Subsequently, glucuronidation and sulfation metabolism occurred and plenty of phase II metabolites were generated. Interestingly, no methylation metabolites of resveratrol were detected directly; however, metabolites underwent both methylation and other metabolic pathways (M3, M8, M10, M17, M20 and M21) were detected. Due to the fact that there are three hydroxyl groups in resveratrol, bis-glucuronide conjugations (M3, M5, M6 and M9) and metabolites underwent both sulfate and glucuronide conjugation (M4 and M7) were also identified. 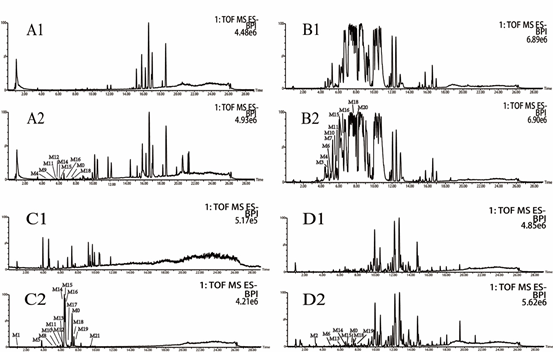 Figure 1: Total ion chromatograms of plasma (A), bile (B), urine (C) and feces (D) in rats after intragastric administration of resveratrol; and 1, blank samples, 2 resveratrol-related samples.

Table 1 : Chromatographic and mass data of resveratrol and its metabolites obtained by UPLC-Q-TOF/MS. 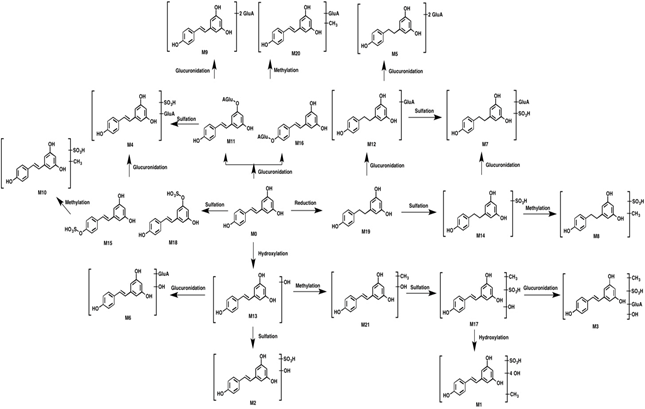 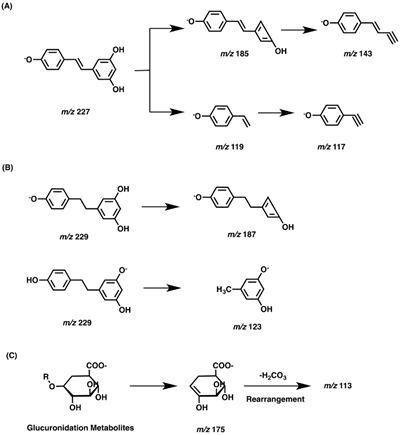 Figure 3: The proposed fragmentation pathways of resveratrol (A), dihydroresveratrol (B) and glucuronidation metabolites (C).

3.2 Metabolites of Resveratrol in Rat Biosamples 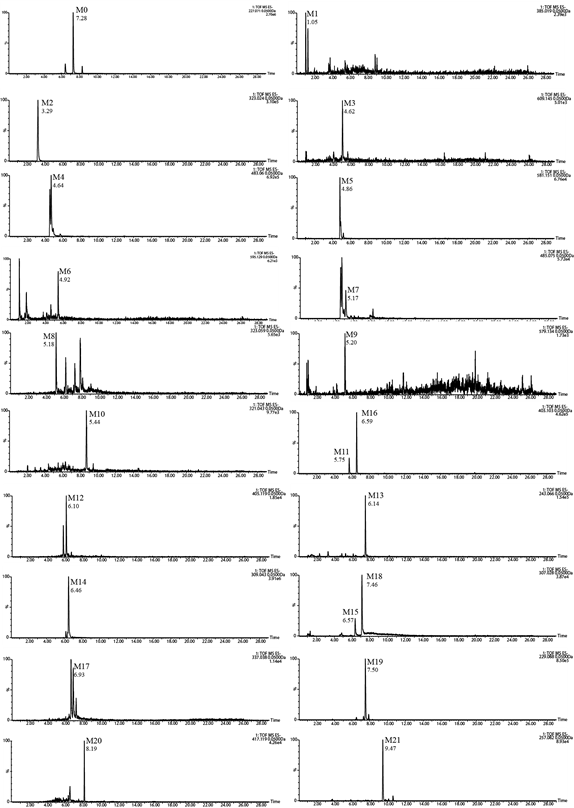 M4 was eluted at the retention time of 4.64 min and showed a quasi-molecular ion at m/z 483.0599 (C20H19O12S). Fragment ions displayed at m/z 403.1022 (C20H19O9), 307.0273 (C14H11O6S) were yielded via the neutral losses of SO3 and a glucuronic acid moiety, respectively. Therefore, M4 was determined of the glucuronide and sulfate conjugate of resveratrol. Similarly, characteristic ion at m/z 175.0240 was observed in the MS2 spectrum of M7, indicating that M7 was a glucuronidation metabolite. Additionally, M7 showed a quasi-molecular ion at m/z 485.0739 (C20H22O12S), which was 2 Da higher than that of M4, thus, M7 was identified as glucuronide and sulfate conjugate of dihydroresveratrol.

Other metabolites including M3, M8, M17, M20 and M21 were presumed based on retention time, molecular weight, and characteristic fragment ions. It is worth mentioning that, among the 21 metabolites identified, only reduction metabolite was confirmed by comparison with reference standard. It would be difficult to unambiguously confirm the structures of other metabolites due to the fact that reference standards of them were commercially unavailable.

Generally speaking, the role of phase I metabolism in the body was to improve the water solubility of metabolites, reduce or abrogate their biological activities. The phase II metabolites can be detoxified through drug conjugation [11]. Some studies have shown that in the body, resveratrol was able to be transported across the intestinal epithelium and conjugated with either glucuronic acid or sulfate [12]. In our study, the number of phase II metabolites were significantly greater than the number of phase I metabolites. The most abundant metabolites were found in the urine, which suggested that the kidney pathway plays an important role in resveratrol excretion. Additionally, in our study, after resveratrol was cultured with rat liver microsomes, we only detected hydroxylated metabolites of resveratrol and no double bond reduction products were found. This may be due to the fact that the reduction products detected in vivo were produced in intestine rather than liver. It has been reported that the intestinal flora can hydrogenate the double bond of resveratrol to form dihydroresveratrol, which is then absorbed and metabolized [13].

Journal of Analytical Techniques and Research