Journal of Spine Research and Surgery

It is impossible to predict in each patient, what will happen. There is always, even in the most banal surgical intervention, an even vital risk, even if in a proportion or percentage of possibilities almost infinitely small. The factors that influence are very varied and range from the conditions of the patient (general condition, anatomical characteristics), to those dependent on the medication required (allergies, gastrointestinal disorders) or inherent to the surgical act itself (anesthesia, technique surgical performed). For this reason, each surgical intervention is selected for each determined patient when theoretically the possibilities of healing or improvement with the intervention are superior to those offered by nature itself in the normal course of the disease. The Spanish Society of Neurosurgery has tried to offer a global view of the possible complications that may appear in this type of cervical herniated disc surgery. It distinguishes the complications common to other surgical acts on the spine and the specific ones of the interventions on the cervical spine by anterior route, already explained.

The list that follows is not intended to alarm, but to show the wide range of possibilities that a complication may arise. Although in daily practice, in patients with a good general condition, the real chances of a complication arising and can leave serious sequelae less than 1%:

Hospital infection, pneumonia; More in patients with low level of consciousness and in immunosuppressed.

1.4 Information to the patient

Increasingly, the medical act and, above all, the surgical act, is a commitment between the parties (surgeon/hospital-patient/family and social environment) to walk together towards the best possible solution within the limits that nature imposes, counting on the means and adequate medical experience, as well as with the effective collaboration of the patient and his environment. All patients prior to their surgical intervention receive a C.I, which is usually validated by the different health departments or scientific societies of each medical specialty.

The patient was seen in outpatient clinics since 2014. A complete and detailed clinical history was made and any type of clinical pathway was followed regarding the Conservative and Symptomatic treatment. The mandatory complementary tests (EMG, MRI) were performed until a correct diagnosis of the pathology suffered by the patient. The patient was diagnosed with a Cervical disc herniation with compression of the C6 root and paresthesia of the left upper limb (Figure 1).

Figure 1: MRI prior to surgery, the arrow indicates the presence of a cervical disc at level C6.

During the surgical act, there was an affectation of the dura mater and exit of cerebrospinal fluid, treated by means of a biological sealant. At the moment of placing the intersomatic box (Figure 2), the neurophysiologist warns of the fall of potentials. The surgery ends and the patient is transferred to the ITU. When carrying out the clinical assessment, a clear paraparesis of the Upper and Lower Left Member 2/5 was observed. 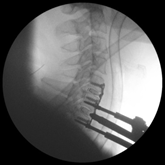 Figure 2: Rx intraoperative control with the placement of the cage and plate.

Urgently, a control MRI was performed (Figure 3), where the presence of blood in the surgical bed with mass effect on the spinal cord was verified. The operating room was reopened, the previous incision was opened, the plate and intersomatic cage were removed, the hematoma and the biological sealant that was in contact with the medulla was evacuated. The patient was referred back to the ITU, where a new neurological scan detected a slight improvement in his clinical picture. 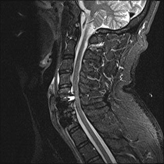 Figure 3: Postoperative MRI; the compression of the marrow is observed by a collection of blood and / or biological sealant.

The failure of conservative treatment, the progression of the motor lesion or the spinal cord involvement are the indications for the surgical treatment of cervical disc hernias. This occurs, depending on the series in 10-20% of patients. The objective of surgery in cervical spine disc is the decompression of the nervous structures.

They were classified into three groups, the first included complications related to the approach and surgical procedure, such as laryngeal complications (dysphonia, aphonia), tracheal, esophageal (rupture, laceration, swallowing discomfort) and pharyngeal, injury to the laryngeal nerves, rupture of large vessels, alteration of the sympathetic-cervical chain, the increase of the neurological deficit (radicular, medullar) as a direct consequence of the intervention, the dural laceration or the cerebrospinal fluid fistula, the soft tissue hematomas and the respiratory problems derived from these, the infection superficial or deep (discitis, meningitis, abscess). The second group included the complications derived from the arthrodesis material, both graft (extrusion, collapse, fracture), and instrumentation (plaque fracture, rupture, extrusion of the screws, extrusion of the Inter somatic box). Systemic complications constituted the third group.

3.2 Duration of the complication

We established as a transitory complication that which did not last after three months, and as a permanent complication, that which remained past this time. Cerebrospinal fluid leakage (CSF) is a potential complication of cranial and spinal surgery. Postoperative CSF leak can induce delayed healing, wound infection and meningitis. . DuraSeal® (Covidien, Waltham, MA, USA) It is a synthetic material. Product that has been increasingly used to facilitate tightness. Repair of dural defects after cranial and spinal surgery. DuraSeal® has been shown to be safe and effective in clinical studies and approved in 2005. By the Food and Drug Administration (FDA) [1]. CSF leak can cause delayed healing of surrounding tissues, such as skin, muscles and bones, due to its caustic effect [2]. Other potential complications include meningitis and severe headaches from CSF depletion. The goal, therefore, once a CSF leak is identified, is to stop the leak. DuraSeal® is a self-curing agent that quickly forms a firm, watertight hydrogel layer several seconds after application on the dural surface. Compared to fibrin glue, there is a “higher resistance of tissue adhesion and resistance to breakage”. The firm layer is robust enough to withstand irrigation and gentle suction maneuvers without risk of eviction. These properties are advantageous to affect a hermetic barrier to minimize the risk of leakage of CSF [2].

After review of the literature [3-5] we have found a case similar to the one we are dealing with: A case of compression of the cervical cord has also been reported in a patient who underwent anterior cervical decompression C5-C6 and fusion that suffered a CSF leak when removing the posterior longitudinal ligament. Using DuraSeal® as primary sealant [3]. Three hours after the operation, the patient developed progressive motor weakness of the upper and lower extremities. During the emerging exploration and decompression, the surgeons determined that the expanded hydrogel was the cause of the compression [3]. Differences between the two cases: In our case the lesion appears during the intervention, therefore it seems unlikely that it is the mass effect of the duraseal that has not had time to consolidate, the one responsible for the motor injury. Rather, it would be a repeated microtrauma during the release of the common ligament. Posterior or a contact during the disc excrescence causes the injury. In the other cases examined, the time necessary for the appearance of neurological locality was much higher, 9 days in Lumbar pathology; In experimental studies, it took between 3 days and 2 weeks to obtain a neurological lesion [4, 5]. A review in the literature reveals an extensive list of complications in anterior cervical spine surgery. Although, many of them are extremely rare [6]. The percentage of complications in anterior cervical surgery ranges from 5% to 30% of cases [7], and 9.8% if we consider only complications that remain permanently as morbidity. In some studies they speak of the epidural hematoma as a complication of anterior cervical surgery. It occurs in 1% of surgeries [7].

The appearance of a new neurological deficit is a rare complication. If the neurological deficit becomes evident immediately after the intervention, the most probable cause of the deficit is due to surgical trauma or problems related to the position or manipulation of the neck during intubation [8]. Between 1.3% to 11% there is a new radicular deficit, and from 0.7 to 3.1% worsening of the spinal deficit [8]. The rupture of the dura mater and cerebrospinal fluid fistula occur between 3.1% to 14% [9]. Surgery carries a risk with percentages of probabilities of improvement, but also of complications and are likely not assurances of improvement if not probability of improvement and also probability or possibility of complications.

Journal of Spine Research and Surgery

"Fortune Journals" offers reward program, under this each NIH funded article will rewarded with some amount. Hereby we are requesting all the NIH grant holders to submit their articles in Journal of Spine Research and Surgery.