Objectives: To analyze the effect of multidisciplinary collaboration in the treatment of skin lesion wounds caused by Gottron's disease of elbow in a patient with amyopathic dermatomyositis.

Dermatomyositis (DM) is an autoimmune disease affecting skin and muscle. At present, patients with typical DM lesions as the main clinical manifestation, no myositis for at least 6 months or longer, or laboratory examinations such as muscle magnetic resonance or electromyography with mild myositis are collectively referred to as clinical amyopathic dermatomyositis. DM lesions are not only closely related to disease activity, but also seriously affect the quality of life and long-term prognosis of patients. Gottron maculopapular rash is a typical skin lesion in amyopathic dermatomyositis, which is accompanied by pain [1] and found on rubbed joints, such as metacarpophalangeal joints, interphalangeal joints, elbows and knees. Besides, amyopathic dermatomyositis is also characterized by symmetrical weakness of upper limb muscles, neck muscles and swallowing muscles. Malnutrition results from the dysphagia and the use of glucocorticoid or immunosuppressive drugs associate with the delayed wound healing. The core idea of multidisciplinary collaboration is to develop a standardized, individualized and continuous comprehensive treatment plan for patients with specific rheumatic diseases. From October 25, 2018 to February 26, 2019, a 56-year-old male DM patient was treated in our multi-disciplinary team of rheumatologists, orthopaedicians, nutritionists and wound therapists. The rheumatologist adjusted the medication precisely and the nutritionist regulated the diet and nutrition. The wound team prepared the wound bed using the theory of wet healing and the orthopedic surgeon sutured the wound. Finally, the patient's bilateral elbow wound healed. The process, method and follow-up of wound treatment are reported as follows.

The patient, a 56-year-old male, had a history of long-term exposure to NaOH in an electroplating factory. In August 2018, he developed multiple skin blisters on both upper extremities, accompanied by ulceration, pus and scab. He also experienced fever, Tmax >39°C, accompanied by chills and fatigue. Pulmonary CT showed effusion in the lower lobes of both lungs. In September, the symptoms progressed, he felt chest tightness and shortness of breath. In October, capillary dilated erythema was found on the lateral cheek, posterior ear and anterior V-shaped area of the neck. There were ulcers on both sides of the elbows (4 cm × 3 cm and 3 cm × 3 cm). On October 25, 2018, he was admitted to our rheumatology department and the myositis antibody test showed positive anti-MDA5 and anti-Ro52 antibodies. So the diagnosis of myopathic dermatomyositis was established [3] and he immediately received methylprednisolone intravenously and tofacitinib orally. Rituximab and cyclophosphamide were also given to the patient due to the rapid development of the pulmonary fibrosis. At the same time, the painful skin lesion of elbow were taken care by the nurses and wound therapist.

2.1.2 Reduce friction: Elastic bandage was used to reduce friction between wound and dressing. After the wound bed is fully prepared, seamless tape was used to pull the wound in the right elbow [5] and the patient was told to cooperate with the upper limb immobilization.

2.1.3 Surgical suture: Since the use of immunosuppressive agents and glucocorticoid increases the risk of wound infection and delayed healing, the wound was sutured by the orthopaedic surgeon longitudinally after assessing that the microbial culture was negative. After two weeks, the suture was removed, and the wound healed well.

Nutritional Risk Screening 2002 (NRS2002) score was 4 when he was admitted to hospital, which means nutritional risk and nutritional therapy was needed. The patient was given oral administration of nutrient powder which was convenient and full of protein. Albumin was given weekly to correct hypoproteinemia. The patient's blood sugar was also monitored, and caloric controlled diet was given.

To relieve the pain, lidocaine diluent gauze was used while changing dressings. Besides, visual pain score was used to evaluate the pain and communication was performed with family members before dressing change to inform wound outcome and obtain informed consent.

After multi-disciplinary collaboration, all the wounds healed, and the patient was followed up after discharge. The condition was stable, the wounds were painless and uncomfortable, and the elbow movement function was good. 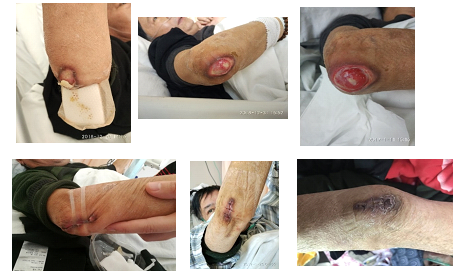 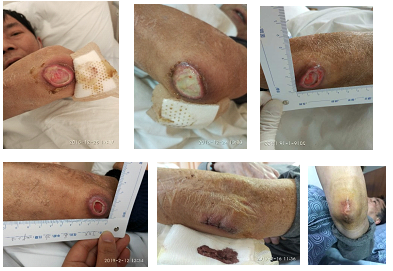 3.1.1 Preparation of wound bed: The erythema scab on the elbow of the patient worsened further during the active period of the disease. The scab fell off and the wound was covered with yellow necrotic tissue. The wound was delayed and became a chronic wound due to the disease. Wound bed preparation includes not only debridement, anti-infection, wet treatment, but also comprehensive conditioning of patients general conditions such as nutritional balance, pain relief, alleviating psychological anxiety, etc. [7]. Studies have shown that pain and anxiety can affect wound healing time [8]. Therefore, before preparing the wound bed for the patient, the pain degree of the patient was assessed and wet dressing with gauze diluted with lidocaine was given to relieve the pain of cleaning the wound. Fixed dressings and immobilized affected limbs to reduce pain and discomfort caused by wound friction. Calcium alginate was used to remove yellow necrotic tissue and promote the growth of wound granulation tissue. Finally, the wound was turned into red granulation tissue, and then foam dressing was used for wet healing to promote granulation growth and epithelial crawling.

3.1.3 Joint wound healing: The elbow extension wound is affected by joint movement, which easily forms friction force to separate the epidermis from the subcutaneous tissue and hinder the healing of the wound. Studies have shown that the use of seamless tap to pull wounds after bandage compression treatment of abdominal infection wounds has obvious effect [11]. We tried to promote the healing of elbow wounds in a non-invasive way when the wound bed is well prepared. Because of poor pulmonary function, hypoxia and hypoxia, the patient's agitation was not effective. Ultimately, surgical suture healed the wound and achieved the final wound healing.

Multidisciplinary collaboration should be widely used in patients with rheumatism. Amyopathic dermatomyositis has typical skin lesions, and most of them appeared at rubbed joints. During the active stage of disease, skin damage is difficult to heal due to poor nutrition, joint friction, immunosuppressive drugs and so on. At present, wound specialist nurses have little research on wounds caused by rheumatic immune diseases, which calls for more exploration and research.

"Fortune Journals" offers reward program, under this each NIH funded article will be published FREE. Hereby we are requesting all the NIH grant holders to submit their articles.