Introduction: The possibility of preserving the limb during the definitive removal operation in the case of sarcoma is a goal pursued in a multidisciplinary perspective. The aim of the study is to report our experience gained in collaboration with the IFO oncology orthopedic division and with the operating units of Orthopedics A and B of the Tor Vergata Policlinico, reporting the results and complications of the procedures performed.

Methods: From 2011 to 2014, 30 patients treated had primitive and secondary musculoskeletal neoplasm with a mean age of 44 years (14-67 years) in 26 cases (86.6%) were required revascularization. Women accounted for 53.84% (14/26), 46.16% were men (12/26). The preoperative study included a biopsy of the lesion and ultrasonography and angio-CT with multiplanar reconstructions for the evaluation of the vascular anatomy and neoplasia extension.

Results: The average postoperative follow-up was 19.4 months. The reconstruction of the vessels has been implemented in 12/26 (46%) mainly using the autologous saphenous contralateral vein. The use of the prosthesis was performed in the others cases (with PTFE and Dacron K prosthesis). In 4 cases the patients had lower limb edema, with a distance venous patency of 80% and arterial patency of 100%. We had no mortality at 30 days. Two patients underwent VAC therapy. No amputations had at 30 days. In 14 patients were perform chemotherapy or radiotherapy before and after surgery.

Conclusions: A long-term evaluation is needed to determine the implications at distance. In case of involvement of arterial and venous vessels, vascular surgery skills allow radical resection and function preservation. The mortality gap depends by the prognosis of neoplasm.

The vascular management of patients affected by resectable neoplasm provides the use of principles of oncovascular surgery in operative planning particularly when preparing for a ligation with complete removal or when performing an arterial or venous reconstruction. In patients affected by lower limb soft tissue sarcomas, the involvement of the neurovascular structures is 3%. Although is a rare occurrence, it requires vascular surgery [1].

In a four years period from 2011 to 2014, in our center were treated 30 patients affected by primitive and secondary musculoskeletal neoplasm with a mean age of 44 years (14-67 years) in 26 cases (86.6%) were required revascularization. Women accounted for 53.84% (14/26), 46.16% were men (12/26). The preoperative study included a biopsy of the lesion and ultrasonography and angio-CT with multiplanar reconstructions for the evaluation of the vascular anatomy, neoplasia extension and a consequent accurate planning of the intervention after oncological, orthopedic and vascular surgery opinion.

An average postoperative follow-up of 19.4 months were performed. 12/26 (46%) patients have been treated by autologous saphenous contralateral vein. The use of the prosthesis was performed in 14/26 (PTFE and Dacron K prosthesis). 4 patients developed lower limb edema, associated with venous patency of 80% and arterial patency of 100% at long term follow up. At 30 days, the survival rate was 100% . 14/30 patients have been treated with perioperative chemotherapy or radiotherapy.

Fortner described the first case of vascular reconstruction in a patient affected by lower limb sarcoma in 1977 [2]. In the following years, the concept of limbs preserving surgery has been progressively adopted, when possible, for the improvement of the quality of life. This objective can be achieved with a collaboration between all the specialists involved in the decision-making process. The role of multidisciplinary team, including oncologic, orthopedic and vascular surgeons, is necessary in patients affected by lower limbs soft tissue sarcoma. In particular, a preoperative planning and cooperation in the postoperative period are crucial [3]. Lower limb soft tissue sarcoma can be rarely removed preserving the arterial and venous vessels. Major vascular resection and reconstruction are required for adequate oncologic margins. The surgical excision of the neoplasm associated with artery and/or vein reconstruction has been reported. A mortality rates of 0-4.8% has been reported in previous case series. 86-100% was the tumor control rate and 92-94.1% was the limb salvage rate.

Following the surgery, edema was clinically evident in about 40% of the treated cases, no difference has been observed between the two different treatments respectively veins treated with grafting or with ligation as Schwarzbach and Tsukushi [4, 5]. In our experience 4/26 patients presented postoperative edema with the same characteristics. 33-57% of the patients developed wound complications, associated with dehiscence reported. The wound complications has been succesfully treated with VAC therapy. The graft infection rates of 6-29% have been reported in literature [4, 8-11]. No infections were observed in our experience Table 1. A multidisciplinary setting is crucial for the radicality of the surgery [12-15] (Figures 1-2). 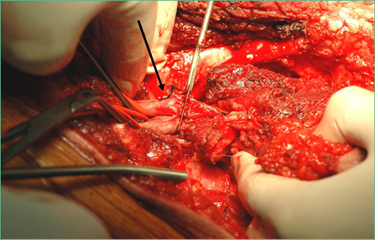 Figure 1: Intraoperative image. The scalpel resets the neoplasia proximally. The non involved vessels are clamped. The arrow indicates the superficial femoral artery and vein to the left of the scalpel. 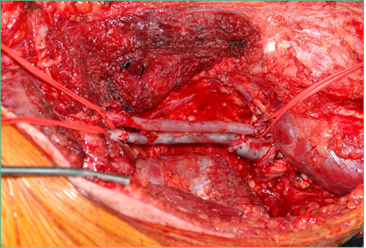 In particular cases the removal of the neoplasm may require a large dissection. In order to preserve the vascular axis or in the presence of ischemia, the presence of the vascular surgeon reduces the bleeding and allows a more accurate and radical removal of the cancer (Figures 3-5). The majority of patients need chemo and radiotherapy and despite the good immediate results in terms of mortality, during the follow up the appearance of metastases and consequent mortality is not negligible. In a long time follow-up experience of 105 months, the 5-year survival rate reported is 68.4% [15-16]. For vessels reconstructions the vein is considered ideal substitute for neoplasm and for atherosclerotic obstructive pathology. 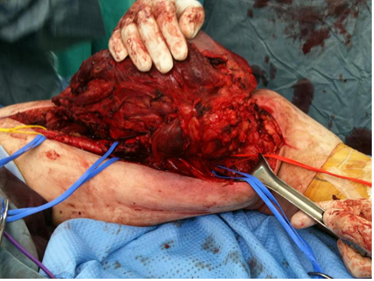 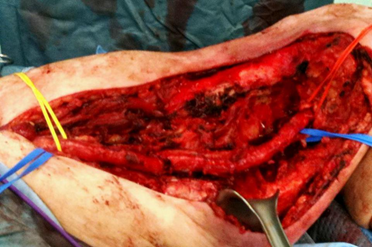 Figure 4: Intraoperative image with the femoral vessels after the sarcoma removal. 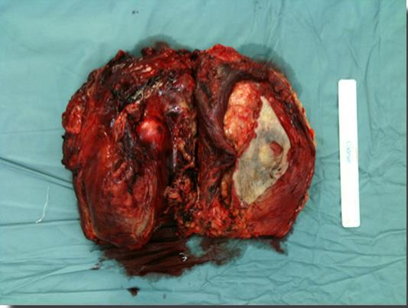 Figure 5: Intraoperative specimen of sarcoma after the surgical removal.

In our experience, in the case of unavailability of suitable venous autogenic substitutes, good results have also been obtained with synthetic prostheses with comparable rates of patency. It is necessary to consider that these are normal arteries, therefore with greater possibility of patency even at a distance. For venous reconstructions, also in our experience the patency was lower, but with no relevant symptoms (Table 1).

Major vessel involvement or injuries induced during cancer surgery may cause serious bleeding. The vascular surgeons in a multidisciplinary approach, plans the exact surgical view through the avascular plane, far from neoplasm and may prevent or minimize these complications. A long-term evaluation is needed to determine the implications at distance in patients undergoing radical resection of cancer. The necessity of vascular surgery skills is rare but essential for limb sparing. The mortality gap depends by the prognosis of neoplasm.

The authors thank the team of Oncological Orthopedics of IFO and Orthopedic and Traumatology A and B Unit of the Tor Vergata Policlinico, for their collaboration.

The authors declare that they have no conflict of interest.