DNA vaccination is an effective way to induce specific immunity. In our study, we used magnetosomes (bacterial magnetic particles, BMPs) as the vehicle of a DNA complex of a secondary lymphoid tissue chemokine, human papillomavirus type E7 (HPV-E7) and Ig-Fc fragment (pSLC-E7-Fc) to produce a gene vaccine (BMP-V) for tumor immunotherapy. In a mouse tumour model, intramuscular injection of BMP-V plus magnetic exposure induced E7- specific immunity eliciting to tumor inhibition. Taken together, these results demonstrated that BMP could be applied as a DNA vehicle to induce specific immune effect.

1. Introduction
DNA vaccines were an effective method to generate antigen-specific immunity. Therefore, lots of delivery ways have been studied. The DNA vaccine delivery by conventional intramuscular injection could not induce optimal immunogenicity, even at high concentrations [1]. The gene gun system and electroporation were superior to other methods [2]. However, various factors influence the success of this method, including the electric pulse, buffer, number of pulses, pulse width, cell density and DNA amount. Both systems require specific and expensive instruments [3]. Therefore, an effective and easy gene delivery system is required to solve the present challenges.

Bacterial magnetic nanoparticles (BMPs), called magnetosomes, were been found in magnetotactic bacteria. BMPs could been used as effective carriers of drugs and genes to target cancer because of their unique properties, such as paramagnetism, nanoscale size (40?120?nm) and high dispersal quality [4]. BMPs are innovative nanoparticles covered with a stable cytoplasmic membrane, which have presumed good biocompatibility. So BMPs could been used to bind proteins and genes in various application area [5]. The BMP-polyethylenimine (BMP-PEI) gene administration system has been developed, which was lower toxicity and higher transfection efficiency than PEI alone [6].

Our laboratory has developed a chemotactic antigen DNA vaccine system to target the human papillomavirus type-16 E7 (HPV-16E7) antigen. The plasmid pSLC-E7-Fc contained a fused gene, in which the E7 gene was sandwiched by the secondary lymphoid tissue chemokine (SLC) and the IgG Fc fragment genes. Our study demonstrated that pSLC-E7-Fc could result in systemic anti-tumour immunity against E7-expressing tumours [7]. In the study, we used the DNA vaccine pSLC-E7-Fc to exemplify the BMPs as a gene carrier. Our results illustrated that BMPs represents a novel and simple approach for gene delivery.

2.4 DNA-binding assay
The polyplexes of DNA, PEI and BMPs were prepared at mass ratios of DNA:PEI:BMP=1:1:0.3. These polyplexes were formed in PBS. The DNA was quanti?ed using spectrophotometry at OD280.

2.5 Tumour models and treatment protocol
For the in vivo therapeutic experiment, 5 × 104 TC-1 cells were inoculated s.c. into the right ?ank of C57BL/6 mice on day 0. When the tumour reached an average diameter of 5mm on day 4, mice were randomized and treated with different doses of BMP-V in 0.1 ml of PBS or PBS alone. Similar treatments were repeated on days 8 and 12. BMP-V was administered to mice intramuscularly to the shaved leg region with or without a magnet (magnetic ?ux density of 600 mT) on the injection site for 10min . Tumours were monitored every 3 days by measuring their dimensions using calipers and calculating their volumes according to the following formula: tumour volume (mm3)=0.52(length X width2).

2.6 Cytotoxicity assays
C57BL/6 mice were challenged s.c. with 5 × 104 TC-1 cells. Four days later, mice were divided into a control group and an immunisation group, in which they were given PBS or 50 mg BMP-V i.m. plus magnet, respectively. Mice were boosted twice on days 8 and 12. Six days after the ?nal booster, splenocytes from immunized and control mice were used as effector cells. B16-F10, TC-1 and YAC-1 cells were used as target cells. Effector cells were added to target cells at a ratio of 60:1, 30:1 and 15:1 (tested in triplicate). The supernatants were pooled and measured lactate dehydrogenase using a CytoTox 96 Non-Radioactive Cytotoxicity Assay kit (Promega) according to the manufacturer’s instructions.

2.7 Statistical analysis
To compare individual time points, analysis of variance was used for comparisons among three or more groups. Student’s t-test was used to compare the means between the two groups. Survival data from the animal studies were analyzed using the log-rank test. Differences were considered to be signi?cant when Po0.05. Statistical analysis was performed using commercially available software (SPSS 11.0, SPSS, Chicago, IL, USA).

3. Result
3.1 Intramuscular injection with magnet application resulted in an increased tumour inhibition as compared with other methods of BMP-V administration
Mice were challenged with TC-1 tumor cells subcutaneously followed by vaccination with BMP-V, which was administered using various methods. Next, the therapeutic effects of different doses of BMP-V in the TC-1 tumor model were compared. In brief, C57BL/6 mice were vaccinated with 50 mg, 25 mg, 12.5 mg BMP-V with or without magnet, 50 mg, 100 mg DNA vaccine through intramuscular injection. Figure 1 demonstrated that 50 mg BMP-V vaccination by i.m. injection with the magnet systemically inhibited the growth of tumors compared to PBS group (P<0.05).On the Day 18, the average tumor volume of PBS group was 872.04 ± 61.73mm3.The average tumor volume of 50 mg DNA vaccine group was 942.68 ± 79.68 mm3.The average tumor volume of 50 mg BMP-V with the magnet group was 390.29 ± 57.12mm3. 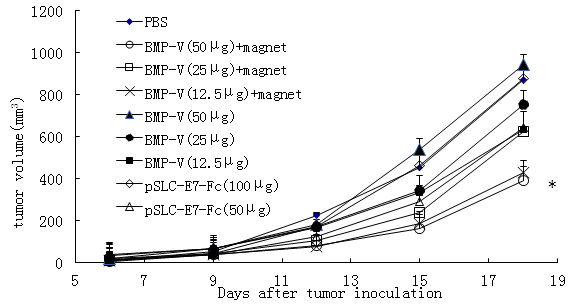 Figure 1: C57BL/6 mice inoculated s.c. with 5 × 104 TC-1 cells. When tumours reached an average diameter of 5?mm on day 4, mice were randomised and treated with different doses of BMP-V (50 mg, 25 mg, 12.5 mg BMP-V with or without magnet, 50 mg, 100 mg DNA vaccine). The same treatments were repeated on days 8 and 12. Tumour volumes were monitored for 25 days until the control mice began to die. Data are presented as mean tumour volumes ± s.d. of five mice per group in a representative experiment. *Indicates P<0.05, all treatments compared with PBS. 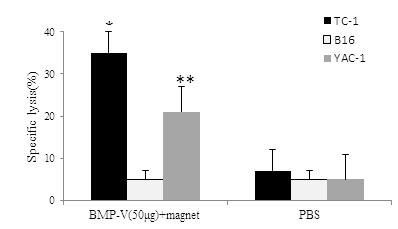 4. Discussion
Bacterial magnetic particles have attracted lots of attention from 1975 [8]. Hopkin demonstrated that BMPs could be used as carrier of drugs to target tumour therapy [9]. The formation of BMPs-PEI?DNA complexes has been illustrated previously Hergt et al. [6] showed that the magnetic character of BMPs as potential therapeutic tools [10].

The small size and favourable dispersion characteristics of BMPs were used in the previous studies [11], but we used the paramagnetism of BMPs to make BMP-DNA vaccine complex. With the help of a magnetic field, we showed that the delivery of the BMP-V could generate greater levels of the E7-specific cytotoxic CD8+ T and induce a specific anti-tumour immune response.

In our study, BMPs carried the gene vaccine (pSLC-E7-Fc) into skin cells, wherein the SLC-E7-Fc fusion protein is subsequently expressed and secreted. The secreted SLC-E7-Fc can recruit a large number of dendritic cells, especially Langerhans cells, at the vaccination site, which may facilitate antigen presentation [12]. This advantage is similar to the gene gun system [13]. However, the mechanism regarding the effects of magnetic field in magnetofection are still unknown and require extensive research for further validation.

DNA vaccine technologies have attracted the attention to develop the efficient way of gene delivery in vivo. BMPs are synthesized in the organism and no toxicity to cells. The cytoplasmic membrane of BMPs provides a presumed good biocompatibility in vivo. In this study, we showed that the BMP vaccine system induce specific immunity. In conclusion, BMPs could be used as a DNA delivery vehicle to enhance anti-tumor effect.

Conflict of Interest
The authors declare no conflicts of interest.