The diagnosis and treatment of Sleep Disordered Breathing (SDB) in pediatric age differs in relation to the adult. Central sleep apnea syndrome (CSAS) is less frequent in childhood, and one of the causes of it is the alterations of the brainstem like the malformation of Chiari type I. The main diagnostic method of SDB is Polysomnography, and there are other methods like brain magnetic resonance imaging (MRI) to investigate its etiology. Here, we share our experience with an 8-year-old female with malformation of Chiari type I and CSAS, and the steps we followed for the diagnosis and successful treatment of such an infrequent pathology in childhood.

The prevalence of Obstructive Sleep Apnea (OSA) in children under 5 years of age is around 3%, with a peak incidence between the ages of 2 and 5 [1], being much less frequent in the case of central sleep apnea syndrome (CSAS).

Combinations of anatomical and functional factors influence the pathogenesis of childhood OSA. Among the causes of CSAS, diseases of the central nervous system, alterations of the brainstem (tumors, malformation of Chiari type I and type II, stenosis of the foramen magno) and the use of sedative or narcotic medication stand out [1-3].

The current diagnostic reference method for any SDB in children is Polysomnography (PSG), although Cardiorespiratory Polygraphy (CRP) could also be performed if necessary as a first diagnostic approach if the symptomatology is highly suggestive. Other diagnostic methods are also useful for discovering the etiology of SDB such as brain MRI [4].

The treatment of OSA in children is mainly based on the etiology of the disease. In the case of CSAS, the treatment of choice is that of the underlying pathology, so its identification is essential [3-5].

Here, we describe a childhood patient with a diagnosis of moderate mixed OSA of central predominance. The etiology of this disease, Arnold Chiari Type I syndrome, was discovered by performing a brain MRI. This case provides a bibliography on how to act and what steps to follow when diagnosing a CSAS in childhood.

The patient was referred to the Guadalajara University Hospital´s Sleep Unit for restless sleep symptoms, apnea witnessed accompanied by persistent snoring, headache and bruxism. She did not refer to nocturnal enuresis, and had a good school performance. Physical examination highlights tonsillar hypertrophy III/IV with normal palate and cardiopulmonary auscultation without alterations. In December 2017, when the patient was 6 years old, hospital CRP was performed with a result of severe OSA with obstructive predominance (apneas hypopnea index-AHI 16/h; obstructive apnea index-OAI: 15.3/h; central apnea index-CAI: 0.7/h). Tonsilectomy was decided, after which the patient showed clinical improvement with decreased daytime hypersomnolence, but persistence of the other symptoms, with headache predominance. 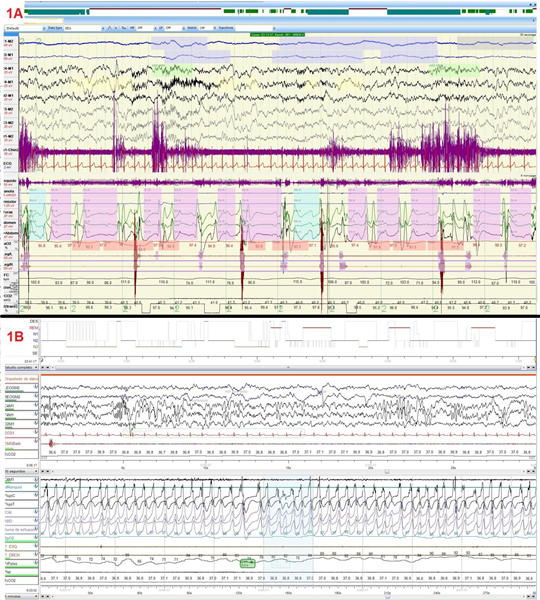 Image 1A: Pre-surgery PSG where multiple apneas of central origin are visible.

Image 1B: Post-surgery PSG where central apneas were resolved.

Given this diagnosis, an etiological study of the CSAS was initiated, performing cerebral- cervical-dorsal contrast MRI. A 9 mm descent of the cerebellar tonsils was observed below the plane of the great hole compatible with Arnold Chiari type I malformation, in association to cervical syringomyelia that extended from C5 to D9 (Image 2). 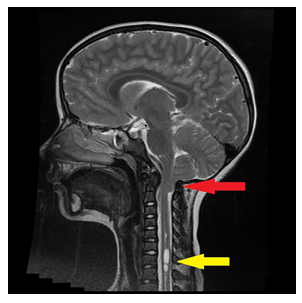 Image 2: MRI of T2 sagittal brain showing a 9 mm decrease in cerebellar tonsils below the plane of the great hole compatible with Arnold Chiari type I malformation (red arrow), in association to cervical syringomyelia that extends from C5 until D9 (yellow arrow).

In July 2020, the patient undergoes decompressive neurosurgery without relevant complications. PSG was repeated 3 months after surgery demonstrating good sleep efficiency and no central respiratory events (Image 1B) and symptoms improvement.

SDB in pediatric age differs in the definition, diagnosis, and treatment in relation to the adult. The child shows anatomical and functional peculiarities in the airway along with maturational characteristics from the point of view of sleep neurophysiology [2].

The most frequent clinical manifestations of OSA are snoring, evidence of nocturnal apnea, daytime hyperactivity or hypersomnolence, poor school performance and neurocognitive alterations1. In the case of CSAS usually occur asymptomatically.

CSA is relatively rare in healthy children. When it does occur, it is usually in the context of an underlying medical condition or neuroanatomical abnormalities. A CAI >5/hr is a reasonable threshold to define clinically significant CSA. Because children may be asymptomatic, those at high risk for CSA should be screened [6]. In healthy children with a PSG diagnosis of CSA we suggest MRI evaluation to assess neuroanatomical abnormalities.

A brain MRI may be an important diagnostic tool for unexplained sleep central apnea in children [4]. In our case, the performance of a brain MRI showed the cause of the pathology. The malformation of Chiari type I is characterized by the existence of a decrease in the cerebellar tonsils that are located below the foramen magnum, associated with compressive phenomena of the brainstem and upper spinal cord. According to the description of Ferré et al [2], the most frequent clinical manifestations are usually occipitonucal headaches, dizziness, and nocturnal respiratory disturbances, such as central apneas.

Adeno-tonsillectomy is the most frequent technique of treatment in children´s OSA, with an improvement in AHI of 75% [1]. Other non-surgical treatments would be the use of CPAP, weight loss, maxillary expansion and/or orthodontics and other methods aimed at eliminating the possible etiological trigger [1]. In the case of CSAS, it is important to identify the underlying pathology. For Arnold Chiari malformation, it is usually decompressive neurosurgery [5].

After surgery, our patient improved all the symptoms related to this pathology and the respiratory events´ disappearance was confirmed in the PSG.

In summary, the Arnold Chiari malformation is a rare cause of central apneas in the pediatric patient, which requires an MRI study for diagnosis. It is important to assess these possible causes in a case of pediatric CSA. We also consider that it would be useful to carry out studies in Chiari malformation´s patients to evaluate respiratory alterations before and after surgery to determine whether surgery treats SDB.