6Department of Obstetrics and Gynecology, Division of Reproductive Endocrinology and Infertility, Stanford University

Background: Cardiac myxoma in pregnant women is extremely rare; with only 50 cases reported in the literature. Management warrants close consideration of both maternal and neonatal morbidity to optimize outcomes.

Case: A 38-year-old pregnant woman with a history of atrial myxoma resection at age 19 and a previous ECHO with no evidence of atrial myxomas presents for cardiac evaluation at 17 weeks gestation. Her imaging demonstrated recurrent atrial myxomas. The patient began on full anticoagulation with enoxaparin to reduce stroke risk and followed closely throughout pregnancy by a multidisciplinary team. She was admitted for labor induction at 35 weeks of pregnancy with delivery of a healthy infant followed, approximately one month postpartum, by successful resection of two areas of recurrent left atrial myxoma combined with tricuspid valve repair.

Conclusion: This patient underwent medical management of the myxoma throughout pregnancy and had surgery postpartum. She had an uncomplicated delivery and postpartum course, illustrating that this condition can be managed initially, antepartum and early postpartum, with a medical approach.

A cardiac myxoma is a pedunculated solitary tumor. It predominantly occurs in women and is the most common benign tumor of the left atrium [1]. Cardiac myxoma can have protean presentations, ranging from an asymptomatic finding on echocardiography to a life-threatening complication, including unexpected sudden death caused by obstruction or embolization. Embolic phenomena are present in 30-40%, intracardiac flow obstruction in almost 50%, and constitutional symptoms in 20-60% of patients [2, 3]. Signs and symptoms are often non-specific and may include dyspnea, palpitations, lower extremity edema, hepatomegaly, angina, syncope, cough, and pulmonary edema.

Cardiac myxoma in a pregnant woman is extremely rare. In a recent literature review from 2015 that included 44 publications, only 51 cases were summarized [4]. Management often warranted a multidisciplinary team approach and close consideration of both maternal and neonatal morbidity to optimize outcomes for the mother and child. In most reported cases, cardiac myxoma in pregnancy was considered a cardiovascular disorder that was managed by immediate surgical resection. The most common operative technique involved an approach by median sternotomy [1]. The overall feto-neonatal mortality is estimated to be 30% among pregnant patients who undergo cardiac surgery (5,6), with much of this risk attributed to complications of cardiopulmonary bypass.

This report describes a young woman with a recurrence of left atrial myxoma discovered in pregnancy who underwent medical management of the myxoma throughout the remainder of pregnancy and the immediate postpartum period. She underwent surgery postpartum. She had a successful outcome, illustrating that this condition can be managed initially, antepartum and early postpartum, with a medical approach.

A 38-year-old woman, NYHA Class 1 G0 with a history of atrial myxoma resection at age 19 and anti-Kell isoimmunization from an earlier blood transfusion, presented for in vitro fertilization and subsequent obstetric and cardiac care.

At age 19, her primary care provider in Iran had noted a murmur on routine exam which prompted an ECG and echocardiogram. A large atrial myxoma was noted on echocardiogram and subsequently removed via the clamshell approach. She remained asymptomatic and had since been followed by unremarkable serial echocardiograms, with the last one performed 5 years before her pregnancy. There was no evidence of left atrial dilatation or myxoma recurrence at that time.

The patient was seen for initiation of obstetrical care at 9 weeks gestation. At 17 weeks gestation, a follow-up echocardiogram was obtained and revealed a mobile 2.0 cm x1.0 cm mass with irregular, friable borders in the anterior wall of the left atrium and the mitral annulus, tricuspid regurgitation, and ejection fraction of 65% (Figure 1). She was cared for by a multidisciplinary perinatal heart team that included specialists from maternal-fetal medicine, cardiology, obstetrical anesthesia, and cardiothoracic surgery. Her cardiac finding was presumed to be recurrence of the myxoma. The patient was given therapeutic enoxaparin (Lovenox®) because of the elevated risk for embolism in the setting of pregnancy and findings from her cardiac imaging. Further workup with cardiac MRI confirmed suspected myxoma recurrence (Figure 1). Brain MRI revealed no evidence of infarction. The patient met with the various consultants and decided to continue the pregnancy and defer surgery until after pregnancy, as the myxoma was smaller and had a reassuring appearance after initiation of anticoagulation. Her pregnancy was uncomplicated other than occasional palpitations in the third trimester resulting in heart monitor evaluation. Monitoring showed benign atrial ectopy with no other significant finding and required no additional intervention.

With regards to her pregnancy care, the patient received intensive antepartum surveillance including serial echocardiograms every 4-6 weeks, and was monitored closely by the multidisciplinary perinatal cardiology team. She was admitted for labor induction at 35 weeks of pregnancy as decided upon by the obstetric, cardiology, and anesthesia teams, in an attempt to optimize balance ongoing maternal risk of pregnancy in this setting while optimizing neonatal prognosis. She received a full course of 12 mg intramuscular betamethasone (two doses in 48 hours) based on the antenatal late preterm steroid protocol for fetal lung maturity [7]. After admission, her enoxaparin was discontinued and she was transitioned to a heparin infusion until the active phase of labor. She delivered a healthy infant after vacuum-assisted delivery because of maternal exhaustion. Therapeutic anticoagulation was resumed after delivery. She had an uncomplicated postpartum course and was discharged home on postpartum day two.

Approximately one month postpartum, successful resection of two areas of recurrent left atrial myxoma combined with tricuspid valve repair were performed. During the perioperative transesophageal echocardiogram (TEE), it was noted that her tricuspid regurgitation was severe; on all previous echocardiograms it had been found to be mild to moderate. Repeat sternotomy via median sternotomy incision was performed. At surgery a gelatinous mass on the anterior left atrial wall was seen abutting the mitral annulus in the A-1 segment. The base was approximately 1x1 cm, in a circular attachment. The mass length was approximately 3 cm (Figure 2). Another small abnormality was seen on the left atrial wall, adjacent to the mitral annulus at the A2 segment. This was excised, sent to pathology (Figure 3), and primarily closed. A restrictive annuloplasty band was placed to downsize the tricuspid annulus, avoiding the AV node. After bypass the heart regained sinus rhythm and the patient was able to be weaned from cardiopulmonary bypass without difficulty. The post-cardiopulmonary bypass TEE revealed normal biventricular systolic function with no mitral or tricuspid regurgitation. The patient had an uneventful recovery and was discharged home on post-operative day 6 in stable condition. 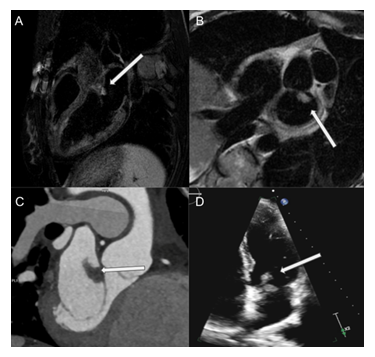 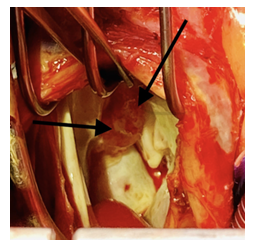 Figure 3: Pathology: H&E stained sections show a highly vascular proliferation of spindled, stellate, and polygonal myxoma cells in a background of abundant eosinophilic myxoid matrix and a chronic inflammatory infiltrate. There are numerous areas of hemorrhage, reflecting the vascular nature of the tumor.

Left atrial myxoma in pregnant patients is extremely rare, with only 51 reported cases noted in the most recent literature review [4]. Management of these primary cardiac masses in pregnancy can be challenging in regard to timing of delivery, necessity of cardiac surgery, risks of subsequent treatment course, and thoughtful coordination of care among several disciplines. Hemodynamic changes associated with pregnancy can potentially increase maternal and fetal risk associated with the condition. There is currently no consensus regarding optimal management of atrial myxoma in pregnancy and the timing of surgery.

The greatest concern for maternal morbidity and mortality stems from the embolic nature of these friable tumors. An embolic episode in the systemic arterial circulation leading to ischemic or hemorrhagic cerebrovascular events has been found to occur in 30%–40% of patients [8]. The patient in our case was immediately started on therapeutic enoxaparin for anticoagulation upon diagnosis of the mass. This was transitioned to heparin infusion during labor, then therapeutic enoxaparin was continued postpartum. Additionally, we involved our neurologists in order to develop an action plan if the patient were to develop stroke symptoms in labor. We planned for immediate stroke code and, if stable, would plan for MRI or CT perfusion scan. If imaging demonstrated large vessel occlusion, neurological interventional radiology would likely have initiated thrombectomy.

Recommendations for the management of myxomatous tumors in pregnancy varies greatly, with some literature even suggesting termination of pregnancy upon tumor diagnosis because of the risk of stroke in the mother and concern for shortened maternal life span. The primary concern about surgical resection during pregnancy is maternal mortality and fetal risk associated with cardiopulmonary bypass (CPB). Earlier studies found the mortality rate for mothers who underwent CPB during pregnancy to be 3-15% [9] although more recent data estimates this risk to be as low as 1.5% in planned cases [10]. The use of CPB during pregnancy is known to be associated with poor neonatal outcomes, with a fetal mortality rate of 30% [5, 6]. A Mayo Clinic study examining 21 pregnant patients undergoing cardiothoracic surgery between 1976 and 2009 reported neonatal complications, including intrauterine growth restriction (5%), respiratory distress syndrome (33%), and development delay (14%) [11]. Proposed timing of surgical resection has varied greatly, with suggestions including immediate resection, delaying resection until the second trimester of pregnancy, and delaying surgery until fetal lung maturity or after delivery. In our patient, the myxoma was smaller and had a reassuring overall appearance on imaging after therapeutic anticoagulation was instituted. There was absence of any embolic findings on brain MRI and she was asymptomatic. Our multidisciplinary team, including cardiologists, a cardiac surgeon, obstetricians, anesthesiologists, and neonatologists reached a consensus to delay delivery until 35 weeks gestation to allow neonatal lung maturity yet minimize the risk of continuing the pregnancy beyond that gestational age. The atrial myxoma was monitored with serial echocardiograms every 4-6 weeks for the remainder of pregnancy and was noted to remain stable in appearance.

Cardiac myxoma in pregnant women is extremely rare. Signs and symptoms are often non-specific, although potential complications can be catastrophic. There is currently no consensus regarding optimal management of atrial myxoma in pregnancy and surgical timing. A multidisciplinary approach including specialists in obstetrics, cardiology, and cardiothoracic surgery is often needed for decision making and management. In this case, we managed a patient with left atrial myxoma successfully using anticoagulation and close monitoring throughout pregnancy. Surgical resection with tricuspid valve repair was successfully performed postpartum.