Background and objectives: Reveromycin A inhibits bone metastasis of lung cancer cells in natural killer cell-depleted immunodeficient mice with increasing apoptosis of osteoclasts. This knowledge suggests that reveromycin A is a potent inhibitor for osteoclasts in vivo. To determine the activity of bone loss in acute estrogen deficiency, we studied ovariectomized mice treated with reveromycin A.

Materials and Methods: Eight-week-old female C57BL/6 mice were either ovariectomized or sham-operated. Reveromycin A was continuously administered for the first 2 weeks (Group RA) or the last 2 weeks (Group RP) using a subcutaneous mini osmotic pump. Mice were sacrificed 4 weeks after surgery. Inhibition was detected by images as well as serum carboxyterminal telopeptide of type I collagen (CTX).

Conclusion: The inhibitory effects of reveromycin A administered immediately after ovariectomy was the most effective at the early phase of bone loss than at the later stage. A new reagent that inhibits bone loss in acute estrogen deficiency might be a new tool to experimentally study osteoporosis and may have clinical implications.

Acute bone loss induced by ovariectomy is an important experimental model of osteoporosis in post-menopausal women. Although extensive studies have been performed, the mechanisms of osteoporosis in acute estrogen deficiency have not yet been fully elucidated. A number of treatment strategies, including bisphosphonates, a receptor activator of nuclear factor-kB ligand inhibitor and hormonal reagents, have been introduced to treat this pathology [1-6]. The introduction of a new probe to study this particular condition presents with new possibilities to study osteoporosis. We previously reported that overexpression of granulocyte colony-stimulating factor induced an apparent reduction in trabecular bone mass and increase in bone absorption at the endosteal surface, thereby resulting in severe osteopenia [7, 8].

Reveromycin A was originally identified as an inhibitor of epidermal growth factor (EGF)-dependent cell growth [9, 10]. Subsequently, this reagent was found to be a strong inhibitor for isoleucyl-tRNA synthetase in yeast [11]. Reveromycin A has been shown to inhibit bone metastasis of lung cancer cells in natural killer cell-depleted immunodeficient mice [12]. In a histologic analysis of reveromycin A-treated mice, increased apoptosis of osteoclasts in tumor-implanted mice was detected, suggesting that reveromycin A is a potent inhibitor for osteoclasts in vivo, which affects bone loss with various etiologies, including acute estrogen deficiency. To determine activity of bone loss in acute estrogen deficiency, we studied ovariectomized mice treated with reveromycin A. We hypothesized that reveromycin A strongly inhibits bone loss in ovariectomized mice.

All animals were maintained at our animal facility under specific pathogen-free conditions and were experimented on in accordance with the National Institutes of Health guidelines on the care and use of laboratory animals.

All reagents were purchased from Sigma (St. Louis, MO) unless otherwise stated.

Reveromycin A (1 μg/ml in PBS) was administered using a mini osmotic pump (Alzet Model 2002, Durect Co., Cupertino, CA), which continuously delivered 200 μL for 14 days, resulting in a dose of 700 ng/kg/day of reveromycin A. The osmotic pump was inserted subcutaneously at the day of OVX or sham operation. Because the osmotic pump was effective only for 2 weeks, we administered reveromycin A for the first 2 weeks (Group RA) or the last 2 weeks (starting infusion at the first day of the 3rd week after surgery, Group RP).

The bone mineral density (BMD) of the femur was measured using dual-energy X-ray absorptiometry (DEXA) using a QDR-1000w Plus Densitometer (Hologic, Waltham, MA), calibrated with a hydroxyapatite phantom of the human lumbar spine. The femur excised at 4 weeks after surgery was fixed with 70% ethanol, and soft tissues were removed. The whole bone was scanned, and measurements were performed with a customized rodent whole body software package (Hologic, Waltham, MA). The scans were performed with a 1.270-mm diameter collimator, 0.762-mm line spacing, 0.380-mm point resolution, and an acquisition time of 9 min. Values were expressed as BMD mg/cm2 as described [14]. The extracted bone was also radiologically examined with soft X-rays (Sofron Type SRO-M50; Soken, Tokyo, Japan).

2.6 Measurement of plasma carboxyterminal telopeptide of type I collagen concentration (n=6 per group)

Carboxyterminal telopeptide of type I collagen (CTX) was measured by enzyme-linked immunosorbent assay using the RatLaps kit as according to the manufacturer’s instructions (Nordic Bioscience Diagnosis, Herler, Denmark) [15].

Continuous variables are expressed as mean and standard deviation. These data were compared among four groups (sham, OVX, RA, and RP) with one-way factorial analysis of variance. The Tukey–Kramer post hoc test for each pairwise comparison was performed if a significant difference was detected. The significance level was set at p<0.05 in all cases. All statistical analyses were performed using BellCurve for Excel (Social Survey Research Information Co., Ltd., Tokyo, Japan).

3.1 Inhibition of bone loss in ovariectomized mice by reveromycin A

Figure 1: Radiological appearance of the distal femur of each group 4 weeks after surgery. Apparent reduction in cancellous bone mass is observed in the OVX group. Inhibition of cancellous bone loss is evident in the RA group, but not in the RP group. 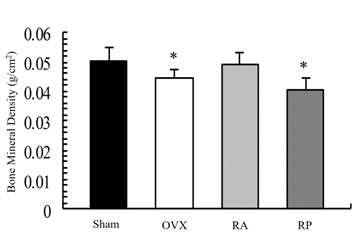 Figure 2: Bone mineral density (BMD) of the femur by dual-energy X-ray absorptiometry. Reduction of BMD is observed in the OVX and RP groups. This reduction is strongly inhibited in the RA group. BMD in the RA group was comparable to that in the sham group. 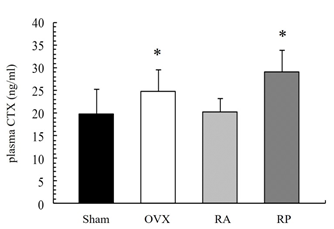 Figure 3: Plasma CTX level at the 28th day of experiment. The RA group exhibited decreased plasma CTX levels. CTX level was significantly increased in the OVX and RP groups compared to that in the Sham group. 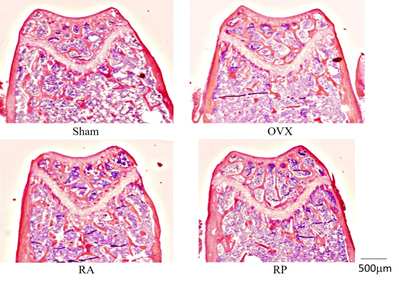 Figure 4: Metaphysis of distal femur. Significant reduction in trabecular bone volume and connection is shown in OVX and RP. The reduction seems to be inhibited in the RA group, similar to the Sham group. (magnification: ×20).

There is no significant difference between the groups.

3.3 Reveromycin A did not change bone development in ovariectomized mice

Bone length and weight of the uterus were measured as indicators for development and estrogen deficiency. The maximum length of the femur and diameter at the midsection of the femur was measured. Uterine weight was also measured. Reveromycin A did not significantly alter bone length or uterine weight in the OVX, RA, and RP groups (Table 3).

Reveromycin A was isolated as an activity to inhibit EGF-dependent cell growth from a culture supernatant of Actinomycetes [9, 10]. A later study revealed that this reagent inhibits isoleucyl-tRNA synthetase in Saccharomyces cerevisiae [11]. Isoleucyl-tRNA synthetase is a member of aminoacyl-tRNA synthetase, which plays an essential role in protein translation. This enzyme was widely expressed in cells throughout the body [17, 18]. Therefore, the inhibitory activity of isoleucyl-tRNA synthetase might cause considerable side effects in the host. Reducing the dose might reduce this consideration because we observed no apparent illness, including diarrhea and weight loss, during the study course. Estrogen deficiency leads to several life-threatening diseases in post-menopausal women [19, 20]. In this study, we used ovariectomy as a model to study estrogen deficiency. Although this model is widely accepted to evaluate post-menopausal syndrome, a lack of the perimenopausal period could be critical for the study of estrogen deficiency. Indeed, the present study suggests that reveromycin A has an inhibitory activity on bone loss in the relatively early phase of the experiment. Acute estrogen deficiency induces strong activation of bone resorption, which is controlled by several independent mechanisms [21–23]. The inhibitory activity of reveromycin A in bone resorption can be used as a novel tool to understand the physiological mechanism of bone loss in vivo.

However, there are some limitations in this study. First, the mechanism of inhibition of bone loss remains unknown. Initial studies indicated that reveromycin A increased apoptosis of osteoclasts in vivo as well as in vitro, but it was not shown that this apoptosis was caused by reveromycin A. Development and activation of osteoclasts is a complex physiological event regulated by cytokines interacting with cells, including osteoblasts, as well as physical status. Second, although non-decalcified samples are generally used, we used a decalcified bone specimen for bone morphometric analysis. However, we analyzed only bone structures that were not influenced by the decalcification process. Finally, we only considered administration of reveromycin A at one concentration. This particular concentration has little systemic effects and does not cause side effects. Thus, it is possible that this is an appropriate concentration for bone loss inhibition without side effects.

These observations indicate that reveromycin A is a strong inhibitor for bone loss induced by ovariectomy. The effect seemed to be stage-specific as reveromycin A was more effective in bone loss inhibition in early exposure in ovariectomized mice. Furthermore, the inhibitory effect of bone loss might be retained for a relatively long duration, as suggested by the decrease of CTX in the RA group measured on the 28th day of the experiment. Further studies are essential to reveal the physiological mechanism of reveromycin A in bone metabolism.

We would like to thank Michihiro Kimura, Mami Yamaguchi, and Seiji Ohtani for their excellent technical support, Hiroyuki Osada for providing reveromycin A, and Enago (www.enago.jp) for the English language editing.