Methods: A retrospective audit of VLBW infants who received ibuprofen for treatment of PDA in a single centre between March 2010 and December 2014 was conducted. Infants with hemodynamically significant PDA were treated with intravenous or oral ibuprofen after echocardiographic evaluation. Response to treatment was documented with follow up echocardiography. The baseline patient characteristics, the ductal closure rate, adverse effects and need for PDA ligation were analysed.

Patent ductus arteriosus (PDA) is a common cardiovascular condition in preterm infants.  Ductus arteriosus (DA) remains patent in 70% of infants born <28 weeks’ gestation and 80% of infants born at 24-25 weeks’ gestation [1-3]. Haemodynamically significant PDA (hsPDA) in preterm neonates has been shown to be associated with several neonatal morbidities such as bronchopulmonary dysplasia (BPD), necrotizing enterocolitis (NEC), intraventricular haemorrhage (IVH) and mortality. However routine treatment of PDA neither failed to show significant reduction in these morbidities nor offer any long-term benefits [2, 4]. Treatment options for hsPDA in preterm infants include conservative management with expectant spontaneous closure, pharmacologic treatment aiming at ductal constriction/closure and surgical ligation. Targeted early treatment of symptomatic PDA is still being practiced by many clinicians, as studies have shown that this offers short term benefits such as reduction in pulmonary haemorrhage, improvement in respiratory status and weight gain [5] Indomethacin and ibuprofen are the only licenced medications for PDA closure in preterm infants. In recent times, paracetamol has also been used for ductal closure with variable success rate [6].

Indomethacin and ibuprofen both inhibit prostaglandin synthesis. Indomethacin is the most studied pharmacologic agent for the treatment of PDA and has been shown to be effective in up to 70% of the cases [7, 8]. Ibuprofen has been shown to be as effective as indomethacin with similar closure rates and fewer renal side effects [9]. The choice of pharmacologic agent varies across units and is guided by the local experience, availability of the drug and cost of treatment. In our unit, we were using intravenous indomethacin as the first line drug for ductal closure. We switched to ibuprofen in the year 2010 due to non-availability of indomethacin. While on ibuprofen, we noticed an increased incidence of gastrointestinal (GI) side effects such as GI bleed and necrotising enterocolitis temporally associated with ibuprofen therapy. This prompted us to undertake this audit to determine the safety and efficacy and the incidence of adverse effects of ibuprofen for treatment of PDA in VLBW infants.

This retrospective audit was conducted in a single centre tertiary neonatal unit at KK Women’s and Children’s Hospital, Singapore. VLBW infants born at 23 - 33 weeks’ gestation and birth weight of 430 - 1500g who received any form of ibuprofen, either intravenous or oral during the study period (March 2010 to December 2014) were included in this audit. Infants with pre-existing renal failure (creatinine >100µmol/L), significant thrombocytopenia (platelet count <100,000/µL), complex congenital cardiac defects and grade IV intraventricular haemorrhage (IVH) did not receive ibuprofen and hence were not included in this audit. All infants who received ibuprofen had hsPDA based on clinical evaluation and echocardiographic assessment. The criteria used to define hsPDA during the study period were pragmatic. Requirement for mechanical ventilation, hypotension, blood stained endotracheal aspirate and cardiomegaly/pulmonary congestion on chest x-ray are considered as significant clinical features of hsPDA. The echocardiographic features of hsPDA considered include ductal diameter of >1.5mm and left atrial and/or left ventricular dilatation [10]. The echocardiographic assessments were performed by trained paediatric echocardiographers and reported by paediatric cardiologists. During the study period unit’s fluid management and feeding practice remain unchanged.

A follow-up echocardiogram was performed within 3 days of completion of treatment. A second course of ibuprofen was given to a subset of symptomatic infants with persistent hsPDA after the first course, confirmed by echocardiography. Repeat course of ibuprofen was not given for infants who had GI/renal adverse events following the first course. PDA ligation was performed for selected cases of symptomatic hsPDA following failure of medical closure or in infants who have contraindication for medical therapy. Antenatal, perinatal risk factors and demographic features of infants who received ibuprofen were obtained from the neonatal database. Time of treatment, post treatment echocardiographic findings and complications of medical therapy were obtained from hospital electronic medical records. Post treatment GI complications including NEC (Bell’s Stage ≥II), spontaneous intestinal perforation (SIP), and significant gastric aspirates (bile or blood, fresh and altered) were documented. Biochemical and haematological changes including hyponatraemia (<130 mmol/L), raised blood urea nitrogen (BUN) (>10 mmol/L), raised creatinine (>100 µmol/L) and new onset of thrombocytopenia (<150,000/µL) up to 3 days post treatment were collected. Approval for this study was obtained from the Centralized Institutional Review Board (CIRB 2016/2106), Singapore. 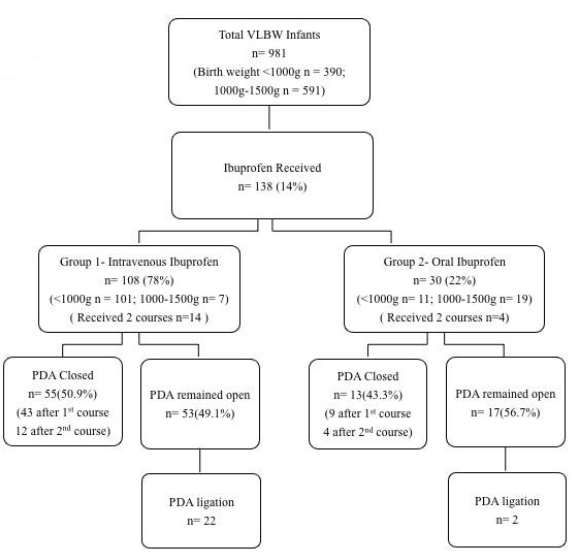 In fetal life, DA shunts blood exclusively right-to-left to deliver oxygenated blood from placenta to the fetus [4]. Ductus arteriosus constricts within 24-48 hours of birth in most term infants causing a functional closure followed by anatomic remodelling. However, spontaneous closure of DA occurs only in about 34% of infants with birth weight of <1000g and 67% in infants of birth weight 1000-1500g by day 7 [11]. Spontaneous closure occurs at later gestations as well. Herman et al. has shown that all VLBW infants who had PDA at discharge from hospital had spontaneous closure at a median corrected age of 48 weeks [12]. Haemodynamically significant PDA in VLBW infants affect mortality as well as comorbidities like NEC, BPD, IVH and long-term neurodevelopmental outcome [13]. However, recent studies question the causal relationship between PDA and adverse neonatal outcomes resulting in wide variations in the management of PDA across the neonatal fraternity [1].

Recently there is a trend towards a more tolerant approach to PDA. However, many neonatologists believe that there are still a selected group of preterm infants, who will benefit from PDA closure. Consequently, targeted treatment of high- risk infants is still being practiced in many units [14]. The choice of pharmacologic agent for the treatment of PDA is also an area of research interest. Indomethacin being the most studied drug is still favoured by many neonatologists. In our unit this was the preferred medication used for medical closure of PDA. In March 2010 our unit switched from indomethacin to ibuprofen as indomethacin became unavailable. An increasing number of cases NEC and SIP were observed after introduction of intravenous ibuprofen, which prompted this audit.

Two intravenous formulations of ibuprofen are used for treatment of PDA, ibuprofen-lysine and ibuprofen-THAM. Ibuprofen-THAM showed increased closure rate of PDA, reducing the need for surgical ligation but at the cost of higher incidence of NEC [15]. Clinical studies and meta-analysis showed that ibuprofen is as effective as indomethacin in closing PDA, with lower risk of NEC and transient renal insufficiency [9, 16, 17]. With regards to the route of administration, some studies have shown better closure rates of PDA with oral ibuprofen than IV ibuprofen [18, 19]. In separate studies done by Cherif et al. and Heyman et al., oral ibuprofen was shown to be effective and well tolerated for early closure of PDA in very premature infants [20, 21]. Intravenous ibuprofen is more expensive and not readily available, hence oral preparation is used more often especially in resource-limited settings. In a study by Gokmen et al., oral ibuprofen was found to be more effective for closure of PDA with one course of treatment. The major intestinal concerns about the oral route were GI bleeding [18]. Richard et al. demonstrated that PDA closure is gestation dependent, with a cumulative closure rate of 65% [22]. The closure rates of ibuprofen have been reported to be as high as 70% in published studies [23].

In our study we have found that the overall effectiveness of ibuprofen in closing the PDA is less than that published elsewhere. Only 50.9% of PDA’s in VLBW infants closed after intravenous ibuprofen and 43.3% with oral ibuprofen. The lower closure rates could be related to selective treatment of PDA and treatment criteria used and preferential treatment of symptomatic infants in the lower gestational age group. In our unit, during the study period only a selected subgroup of symptomatic infants with persistent PDA after the 1st course of ibuprofen was given the 2nd course based on clinical and echocardiographic parameters. This could be the likely reason for the additional closure rate after the second course of oral ibuprofen in our study. We have noticed significant GI complications associated with both intravenous as well as oral ibuprofen use. A randomized, double-blind, placebo-controlled study by Gournay et al. with prophylactic ibuprofen for efficacy and safety was stopped prematurely due to severe pulmonary hypertension in 3 of 65 infants born less than 28 weeks of gestation. Above all, in that study, survival was not improved with intravenous ibuprofen-THAM due to higher incidence of digestive, respiratory and renal adverse effects [15]. We also used IV ibuprofen-THAM in our cohort but the incidence of NEC was not different from the bigger babies in the oral group but SIP was noted only in infants treated with intravenous ibuprofen. Pulmonary hypertension was not observed either in our oral or intravenous ibuprofen treated infants.

Hyperosmolality of preterm milk feeds with added medications and supplements has a potential to cause feed intolerance and even NEC [21]. This has led American Academy of Pediatrics to recommend an osmolality of less than 450 mOsm/kg for enteral feeds of preterm infants at-risk of NEC [21, 22]. We have studied the neat osmolality of common oral medications and supplements used in preterm infants and found the optimal dilution ratio with diluents such as water, breast milk, breast milk with fortifier and preterm formula, to achieve an osmolality of < 450 mOsm/kg [24]. Neat osmolality of ibuprofen syrup used in our unit was >2000 mOsm/kg and since 2016 we have been using appropriate dilution ratio to optimize the osmolality with no further cases of NEC observed following oral ibuprofen therapy [25]. Kushnir et al. reported an overall similar effect on renal function with repeated courses of therapy with ibuprofen and indomethacin [26]. In our cohort, renal impairment during ibuprofen therapy showed an increasing trend with higher creatinine and raised BUN in smaller infants treated with intravenous ibuprofen than in larger infants in the oral group. In addition, we have also noticed significantly higher number of infants treated with intravenous ibuprofen developing thrombocytopenia, which has not been reported in previous studies with ibuprofen [27]. This could be due to the smaller and more immature neonates in the intravenous group and needs further evaluation in any future studies.

Intravenous ibuprofen has an overall 50.9% success rate in closing the PDA in our VLBW population, less than the 70% published in the literature [23]. Serious GI complications were observed in up to 11% of VLBW infants treated with intravenous ibuprofen in our cohort. Even though ibuprofen had been described as an effective drug in closing the PDA, the closure rate could be as low as 50% and with significant GI side effects especially in smaller infants treated with intravenous ibuprofen. Hence, the use of ibuprofen should be carefully considered if PDA treatment is contemplated in VLBW population and treatment alternatives including conservative treatment should be considered where appropriate. Parents should also be counselled regarding the possible adverse effects. We also feel that there is still justification for more randomized control trials comparing ibuprofen treatment with placebo and looking at outcome measures including ductal closure rates, adverse effects and long-term outcomes.

We would like to thank late A/Prof. M Gomez Joseph, Senior Consultant, Department of Neonatology, KK Women’s and Children’s Hospital, Singapore for initiating this research work and guiding through the preparation of proforma and collection of data and Prof. Divakaran Liginlal of Carnegie Mellon University, Pittsburgh, P.A., USA, for editing the manuscript.

Conflict of interest: None declared.