The sensory qualities of the juice of 'Aliza', a new pomelo × mandarin hybrid developed by the Israeli citrus breeding program, ARO, The Volcani Center, were analyzed and compared with orange and red grapefruit juices, whom are the most consumed citrus juices worldwide. The conducted sensory analysis of fresh 'Aliza', orange and red-grapefruit juices included flavor-description tests, consumer-acceptance tests, preference tests and evaluations by an electronic tongue (e-tongue) and an electronic nose (e-nose). The flavor of 'Aliza' juice is characterized by high sweetness, moderate sourness and bitterness, and strong citrusy and tropical fruity aromas. 'Aliza' juice is bitterer than orange juice and has less of a citrusy odor, but a stronger tropical odor. It is less sour and bitter than grapefruit juice and has a stronger tropical aroma. 'Aliza' fruit have a very high juice content, and its juice achieved the highest consumer-acceptability score among all of the examined citrus juices and was most preferred by the majority of all tasters. Objective taste-profile evaluations by the e-tongue revealed significant differences in sourness, bitterness and umami tastes among 'Aliza', orange and grapefruit juices. We conclude that 'Aliza' juice is different from orange juice and grapefruit juice and is highly preferred by consumers, and thus 'Aliza' fruit may be used for the development of a new preferred citrus beverage.

Above all, citrus fruit and citrus juices are appreciated and consumed by billions of people around the globe because of their unique delicate and attractive flavours, evolved from a blend of sweet, sour and bitter tastes and fruity, fresh and earthy aromas [6]. Orange juice has a popular sweet-sour taste, as it contains about 11-12% total soluble solids (TSS) and has a titratable acidity (TA) rate of 1.0-1.2%, resulting in a TSS: TA ratio of ~10, and is considered non-bitter. The main aroma attributes of oranges are fruity, citrusy, herbaceous, spicy and floral notes [7, 8]. In contrast, grapefruit juice is less sweet and more sour, with about 10-11% TSS and 1.4-1.8% TA, resulting in a lower TSS:TA ratio of ~6.6 [9]. In addition, grapefruit accumulates the glycosidic-flavanone naringin that is responsible for imparting a bitter taste [10]. The main aroma attributes of grapefruit are fruity, green/grassy, terpene-like, pungent, citrusy, sulfurous/catty and grapefruit-like notes [11, 12].

'Aliza' is a new and unique pomelo × mandarin hybrid developed by the Israeli citrus breeding program at the ARO Volcani Center (Israel Patent ID: 3099). 'Aliza' fruits are about the same size as grapefruits, have a unique yellowish/golden color, are seedless and have a very high juice content (Figure 1). 'Aliza' fruits also have a unique flavour, which is a result of the combination of high sweetness, moderate bitterness and strong citrusy and tropical fruity aromas (unpublished data).  Unlike grapefruit, 'Aliza' fruit have a very low content of furanocoumarins, which are the main compounds responsible for the food-drug interactions known as the grapefruit effect, caused by the inhibition of CYP3A4-mediated drug metabolism [13, 14].

In the current study, we conducted sensory analysis of freshly squeezed 'Aliza' juice flavour as compared with orange and grapefruit juices by either human sensory examinations as well as by objective instrumental electronic tongue (e-tongue) and electronic nose (e-nose) evaluations. Based on this work, we suggest that 'Aliza' juice is a new citrus beverage that differs in sensory quality from orange and grapefruit juices and is highly preferred by consumers.

'Newhall' navel oranges, 'Star Ruby' red grapefruits and 'Aliza' fruits (Figure 1) were obtained from 10-year old trees grown in the citrus breeding collection orchard at the ARO, The Volcani Center, Rishon LeZion, Israel. Each variety included four trees grafted on Troyer rootstock. The fruits were harvested at full maturity during November and December 2019. All experiments were conducted with fresh fruits that were harvested on the same day or within a 2-day period and temporarily stored at 10°C. The fruits were washed with tap water and then allowed to dry. Juices were then extracted with a manual metal home juice squeezer (VIVOHOME, City of Industry, CA, USA).  Each juice sample was prepared from at least 10 different fruit. Sensory tests were conducted with fresh juices, not later than 2 h after extraction. 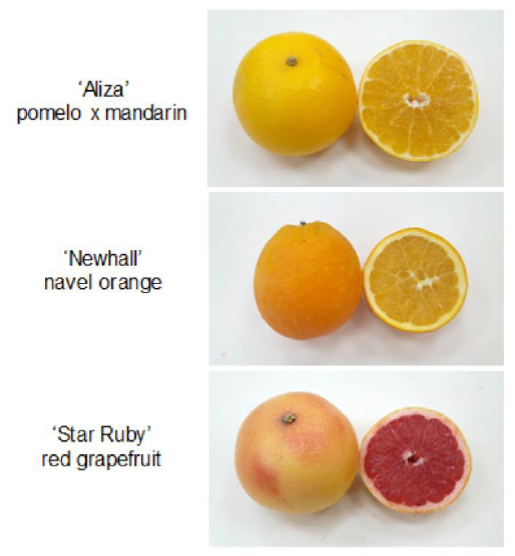 Sensory analysis was conducted according to standard procedures [15]. Quantitative descriptive flavour analyses were performed with the aid of a trained sensory panel comprised of 10 members-four males and six females aged 25 to 65, who routinely perform flavour tests of citrus fruits as previously described [16, 17]. Each panelist assessed the various attributes of the juice samples according to an unstructured 100-mm linear intensity scale for each attribute. The scale ranged from “very weak” to “very strong” and sensory data were recorded as distances (mm) from the origin. The sensory attributes were chosen and defined by the trained panel following conduction of preliminary tasting sessions of 'Aliza' juice and open discussions of about 2-3 h each meeting.  The defined flavour attributes included sweetness, sourness, bitterness, freshness, fruity citrusy aroma and fruity tropical aroma. The sensory panel was trained by tasting standards of 0-5% sucrose to evaluate sweetness, 0-0.5% citric acid to evaluate sourness and 0.5-2.5% caffeine to evaluate bitterness. Fruity citrusy aroma was related to the smell of orange peel and fruity tropical aroma was related to the smells of banana and pineapple.  The trained panelists assessed the juice samples in two independence replications.

Consumer flavour acceptance and preference tests were conducted according to Lawless and Heymann [15], by questioning 90 untrained panelists including employees and students working at the ARO, The Volcani Center. The panelist's age ranged between 22 to 67, but there was a relatively high representation of about two thirds of students and postdocs with ages between 22 to 35.  The distribution between males and females was nearly equal. For the acceptance test, flavour scores were assigned according to a 9-point hedonic scale that ranged from “dislike extremely” to “like extremely”. For the preference test, each panelist received three cups of freshly squeezed juices: one cup of 'Aliza' juice, one cup of orange juice and one cup of red grapefruit juice. The cups were presented in a random order. The panelists were asked to report their first, second and third preferences. The results were expressed as the percentage of testers who said that a given juice was their first choice.

The electrical taste profiles of the citrus juices were determined by the Taste-Sensing System SA-402B (e-tongue; Intelligent Sensor Technology Co., Kanagawa., Japan), as described previously [18]. The system included six sensors: three positively charged lipid membranes for sweetness (GL1), acidic bitterness (C00) and astringency (AE1), and three negatively charged lipid membranes for saltiness (CT0), sourness (CA0) and umami (AAE). The taste-intensity signals obtained from 70-mL juice samples were measured as the potential differences between the sample and reference solutions. Three biological replications were performed for each sample, each prepared from 3 different fruit. Taste intensities of the various attributes were calculated according to a conversion method that has been described previously [19, 20]. The electrical aroma pro?les were evaluated using an e-nose (PEN3; Airsense Analytics, Schwerin, Germany), as described recently [21]. The system consisted of a chamber with 10 metal-oxide sensors that absorb volatile compounds. The juice samples (2 mL each) were enclosed in 20-mL glass vials and allowed to stand for 30 min at room temperature, so that headspace equilibrium could be achieved. The presented data are means of two biological replications, each prepared from three different fruit; and each measurement included three repetitions, i.e. a total of six replications for each type of juice.

3.5 Sensory evaluations by the e-tongue and e-nose 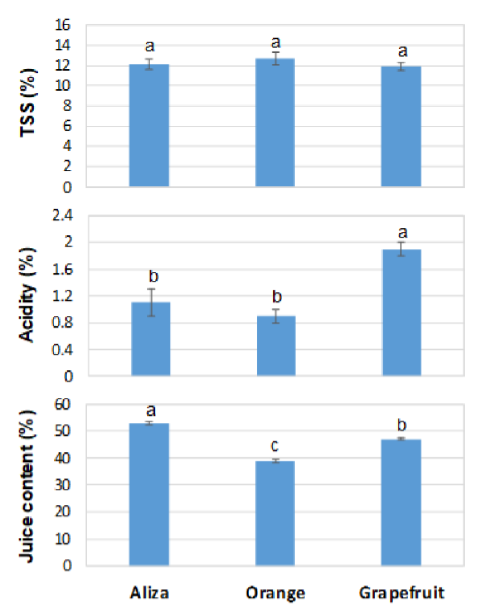 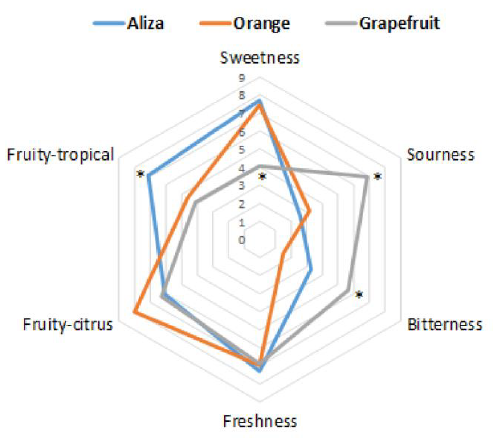 Figure 3: Flavor profiles of 'Aliza', orange and grapefruit juices. Flavor profiles were evaluated with the aid of a trained sensory panel and data are means of scores assigned by 10 testers. Asterisks indicate significant differences at p ≤ 0.01. 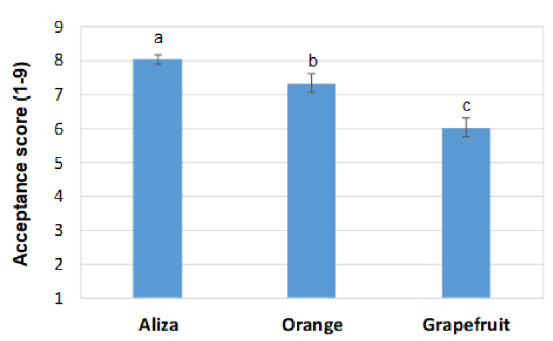 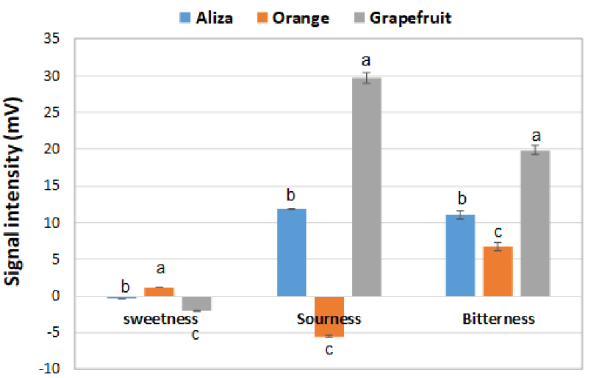 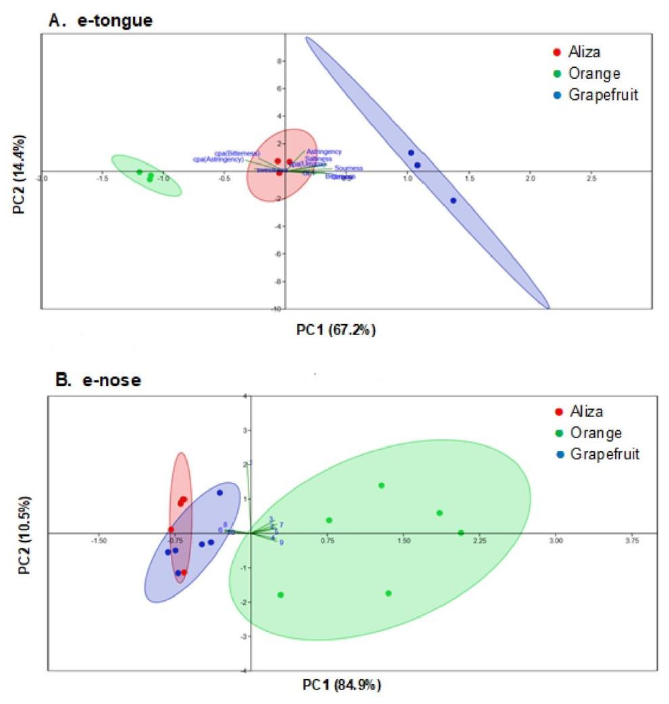 Figure 6:  Biplot PCA charts of the e-tongue (A) and e-nose (B) data observed for 'Aliza', orange and grapefruit juices. Prediction ellipses are such that with probability of 0.95 a new observation from the same group will fall inside the ellipse. In Figure A, n = 9 data points, while in Figure B, n = 18 data points.

Citrus juices are widely consumed worldwide due to their refreshing and exceptional flavour [1]. In this study, we characterized the sensory quality of the juice of 'Aliza', a new pomelo × mandarin hybrid with an exceptionally high juice content. Sensory analysis demonstrated that 'Aliza' juice has a distinct flavour profile, as compared to orange and grapefruit juices. Compared to orange juice, 'Aliza' juice is more bitter and has less of a citrusy odor, but more of a tropical odor. It is also less sour and bitter than red grapefruit juice, with a stronger tropical odor than grapefruit juice. Interestingly, the sensory evaluations of sourness were in accordance with the observed acidity levels, i.e. grapefruit had the highest acidity levels and was perceived as most sour.  However, we have not detected any significant differences in TSS levels between the different juices, but yet the sensory panel perceived grapefruit juice as less sweet than 'Aliza' and orange juices (Figures 2-3).

Our sensory evaluations further revealed that 'Aliza' juice received the highest consumer-acceptance scores among all of the examined citrus juices and was most preferred by the majority of the tasters. Nonetheless, it should be mentioned that the majority of the consumer and preference tests panelists were students and postdocs working at the Volcani Center with an average age of 22 until 35. Therefore, the achieved results might have been biased towards the preference of young people to sweet attributes while neglecting the preferences of older people to bitter attributes. Therefore, it is yet necessary to conduct further extensive consumer and preference sensory analysis among a wider group of citrus juice consumers before reaching any absolute conclusions.  Also worth notice is that we compared 'Aliza' juice with only one orange variety and just one grapefruit variety, which may not represent most commercial consumed orange or grapefruit juices that are rather blends of various varieties. Furthermore, the current sensory studies were conducted using freshly squeezed non-pasteurized juices, while commercial juices are heat processed. Thus, further sensory evaluations yet need to be conducted following commercial juice manufacturing conditions before we may finally recommend on the commercial production of 'Aliza' juice.

In addition to the characterization of 'Aliza' juice, this study further demonstrates that e-tongue and e-nose provide effective means for objective evaluations of the sensory quality of citrus juices. These findings are in agreement with a previous report indicating that e-tongue may provide an effective tool for determining harvest maturity and detecting signs of citrus greening (huanglongbing) disease in orange juice [24]. In fact, e-tongue has been reported to be a very effective tool for the evaluation of sensory qualities of Chinese bayberry, pomegranate, strawberry, grape and apple juices [18, 24-28].

Overall, we demonstrated that juice from 'Aliza' fruit represents a new citrus beverage that differs in sensory quality from orange and grapefruit juices and is highly preferred by consumers due to its unique combination of sweetness and bitterness and its strong citrusy and tropical aromas.