Single coronary artery anomaly is a rare congenital coronary artery disease, found as an isolated anomaly in approximately (0.024%-0.044%) [1]. The first case was reported by Thebesius in 1761 [2]. The first angiographic classification was proposed by Lipton et al in 1979, and modified in 1990 [1, 3]. 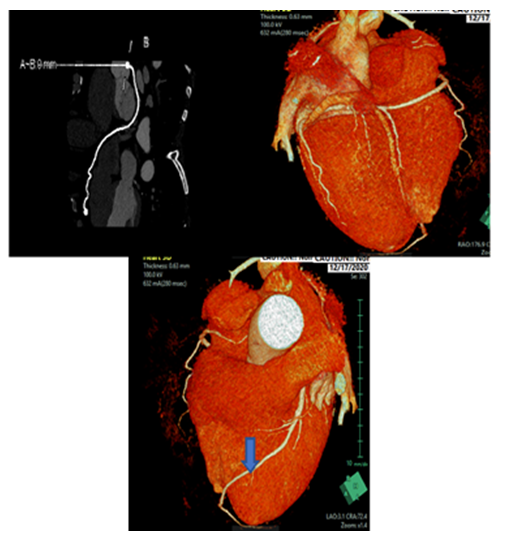 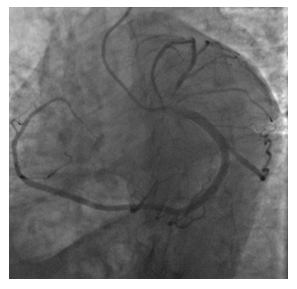 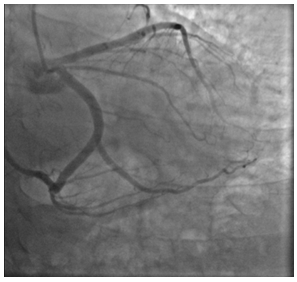 Cardiac catheterization revealed the left coronary artery originating from the left ostium giving rise to the left anterior descending (LAD) and Left Circumflex (LCx) arteries. LCx gives rise to four obtuse mariginals (OMs) and continues in the atrioventricular (AV) groove and supplies the right coronary territory, giving off the posterior descending artery (PDA) and several acute marginals, several attempts were made to visualize the RCA and was deemed to be absent (Figures 2, 3). Overall, there were no hemodynamically significant coronary artery obstructions, only very mild coronary disease. The patient was managed medically and discharged in stable condition, and was scheduled for outpatient follow up.

The incidence of SCA according to Lipton et al was 0.024% and according to Yamanaka and Hobbs was 0.044%. A retrospective analysis by Desmet et al. showed low incidence of associated congenital heart disease and suggested no association brtween SCA and certain other diseases [4]. In a study of 142 patients with an SCA and associated congenital heart disease, in 49% SCA arose from the right sinus of Valsalva (SoV), and 45% arose from the left SoV. Major congenital cardiac anomalies were reported in 41%, the most common anomalies were transposition of the great vessels, coronary artery fistula, improper division of the truncus arteriosus, tetralogy of Fallot and bicuspid aortic valve.

Lipton’s classification considers the beginning of the ostium from the sinus of Valsalva, anatomical path of the vessel, and the sequence of the transverse trunk. Alphabets R or L are used to identify the ostial origin of the vessel, roman numerals I, II, or III are used to represent the anatomical distribution of the vessel, and letters A, B, P, S, and C are used to outline the progression of the vessel with respect to the pulmonary artery and the aorta. The majority of patients are asymptomatic. However, around 15% might have ischemic heart disease directly triggered by the atypical anatomy of the arteries and not by coronary artery disease. Ischemic symptoms might range from exertional angina to sudden death in rare types.

Impaired myocardial perfusion can be related to anatomical malformations, including the acute angle take-off of the anomalous vessel, with a tapered slit-like orifice that breakdowns in a valve-like manner, thereby limiting the blood flow. Other anatomical structures responsible for ischemia are the proximal intramural course of the anomalous vessel, which is squeezed within the aortic wall, and the compression of the anomalous vessel along its path between the aorta and the pulmonary artery during exercise as both vessels get larger [5, 6]. Taylor et al observed the records of 242 deceased patients with remote congenital coronary anomalies and found that one-third of the patients had sudden cardiac death, and half of these were exercise-related deaths, with younger patients were obsereved to die suddenly during physical exertion (Taylor AJ, Rogan KM). Moreover, Basso et al. claim that (59%) of patients with SCA, died under the age of 30 years of age, mainly during exercise [6].

Coronary angiography is the gold standard to diagnose, assess and classify coronary anomalies, echocardiography can be used to detect any other associated structural heart diseases. Cardiovascular magnetic resonance (CMR) is an alternative, non-invasive tool, with the advantages of no radiation exposure, no body habitus limitations, and instantaneous assessment of cardiovascular structure and perfusion, it aslo provides high spatial and temporal resolutions [7]. Percutaneous Coronary Intervention (PCI) considered the gold starndartd for treatement, the abnormal source and path of coronary arteries might be challenging and could lead to complications in cannulation of the coronary ostium as well as technical difficulties in catheter support during

Single coronary anomaly is a rare congenital disease with wide variety of symptoms, ranging from anginal symptoms to sudden cardiac death. Multi-disciplinary approach should be used in evaluating those patients. Further studies are recommended to help in earlier diagnosis and management.

No funding or sponsorship was received for publication of this article.

All named authors take responsibility for the integrity of the work as a whole, and have given their approval for this version to be published.