In congenital cholesteatoma, it is thought that the cholesteatoma epithelium often pre-exists in the middle ear cavity from birth and is subsequently found in childhood. Epithelioma is derived from epidermis cells that have entered the embryonic period, and most epitheliomas are of a cystic form containing keratin (closed type), but there is also a membranous form of epithelioma that does not form a cyst (open type) [1-3]. Tos M. stated the incidence of congenital cholesteatoma is around 0.12 out of 100,000, and it is more common among boys [4]. In recent years, otolaryngologists and pediatricians alike have increased the awareness of this disease, and the number of cases diagnosed at a young age has increased due to the spread of improved screening and diagnostic techniques. In addition, there has been an increase in the number of cases diagnosed coincidentally from symptoms such as hearing loss and otitis media. Furthermore, there are reports that congenital cholesteatoma can spontaneously regress, identified by changes in tympanic and CT findings over time [5]. We examined if there is something with congenital cholesteatoma of spontaneous regression, and it can be used for follow-up. Herein we report two cases of spontaneously regressed cholesteatoma, each with different relationships between the cholesteatoma and ossicles.

Our first patient was a boy who presented with a history of progressive hearing loss in the left ear. Left hearing loss was first noted during a school checkup at the age of 6 years in 2008, after which he visited a nearby clinic. Pure-tone audiometry showed a conductive hearing loss (Figure 1). 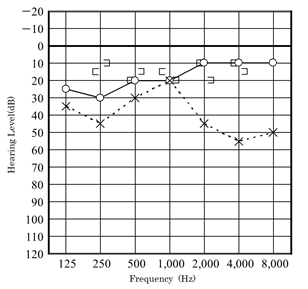 Figure 1: Hearing level at the 6 years old patient of Case 1, tested on his first visit to our hospital.

Magnetic resonance imaging showed no acoustic tumor. Since then, follow-up had been performed at the aforementioned nearby clinic. At the age of 7 years, in February 2010, the patient had no change in hearing loss and was referred to our hospital. Upon admission to our hospital, the eardrum findings were normal (Figure 2). 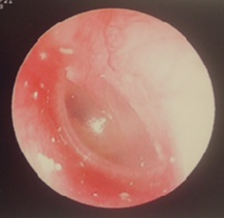 Figure 2: Eardrum condition of patient of Case 1 at the first presentation at our hospital.

Audiometry again showed left conductive hearing loss and acoustic reflex tests were bilaterally positive. At this time, the patient was asked to continue with follow-up at the nearby clinic. In August 2011, computed tomography (CT) at the nearby clinic showed small, soft shadows around the tympanic segment of the facial nerve and the stapes (Figure 3). In December 2011, pure-tone audiometry at the clinic showed deterioration (Figure 4). 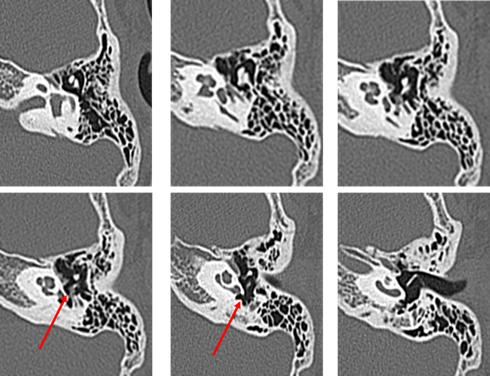 Figure 3: CT performed in August 2011 on the first patient at 8 years old. (The red arrow indicates the soft shadow suspected to be cholesteatoma). 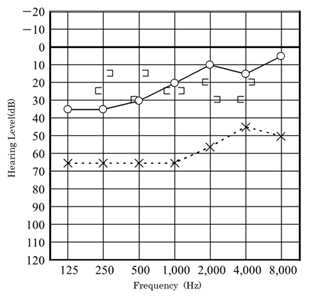 Figure 4: Hearing level of the first patient, tested in December 2011.

The patient visited our hospital again in January 2012 at the age of 9 years. Possible congenital cholesteatoma or ossicular chain malformation were considered, and the patient was scheduled for surgery. In July 2012, preoperative CT showed a reduction in the previously seen shadow (Figure 5); however, the hearing test showed no significant change. Left tympanoplasty was performed in August 2012.

During the operation, the mucosa of the tympanic cavity was normal, but an open type cholesteatoma was found from the tympanic segment of the facial nerve and the long process of the incus to the stapes. The long process of the incus was eroded and the anterior and posterior crura of the stapes were missing, and the stapes superstructure was separated from the footplate. The cholesteatoma was removed; however, because the cholesteatoma had invaginated into the lower surface of the tympanic segment of the facial nerve, we considered the possibility of remaining tumor cells and scheduled a staged operation. The postoperative diagnosis was Potsic classification Stage II congenital cholesteatoma (Figure 6) [6]. In 2013, left tympanoplasty was performed, and there was no subsequent recurrence of cholesteatoma. In August 2018, 5 years after the second operation, no recurrence was found by CT, and follow-up at our hospital was ended. 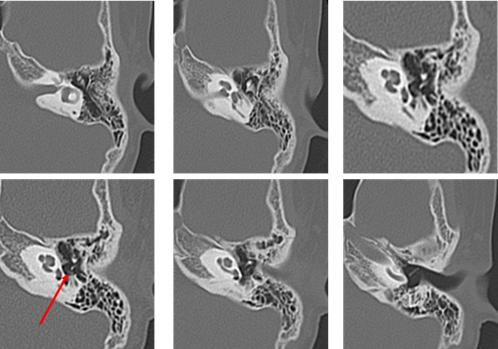 Figure 5: CT performed one month prior to surgery in July 2012 on the first patient at 9 years old. (The red arrow indicates the soft shadow suspected to be cholesteatoma. Compared to the first presentation, the shadow has decreased in size). 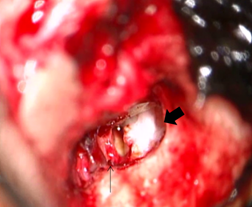 Our second was a boy diagnosed with hearing loss and left tympanic membrane abnormality at a medical checkup in April 2013. He visited a local doctor and was treated for left otitis media with effusion (OME). His left OME resolved, but there was no improvement in hearing, and the patient was thus referred to our hospital in August 2013. Examination revealed small perforations in the posterosuperior quadrant of the left eardrum (Figure 7). CT revealed a soft shadow from the epitympanum to the mastoid cavity, and the long process of the incus and the superstructure of the stapes appeared to be missing. However, CT showed discontinuity of these two lesions. Therefore, we suspected left pars tensa cholesteatoma or congenital cholesteatoma and ossicular chain malformation (Figure 8). In March 2014, preoperative CT showed a reduction in the previously seen soft shadow (Figure 9). 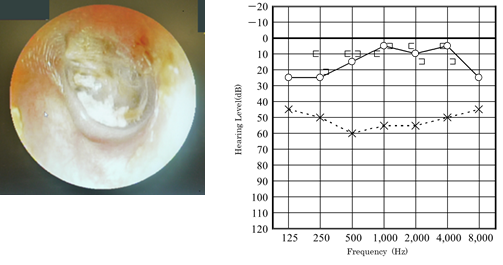 Figure 7: Eardrum condition and hearing level of the patient of Case 2 in April 2013. 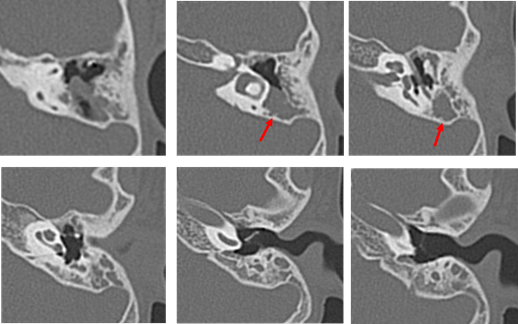 Figure 8: Computed tomography performed in August 2013 on the patient of Case 2 aged 7 years. The long process of the incus and stapes are missing. Suspected cholesteatoma from the soft shadow (indicated the red arrow) in the epitympanic attic and mastoid sinus. There are no suspicious findings around the ossicles. 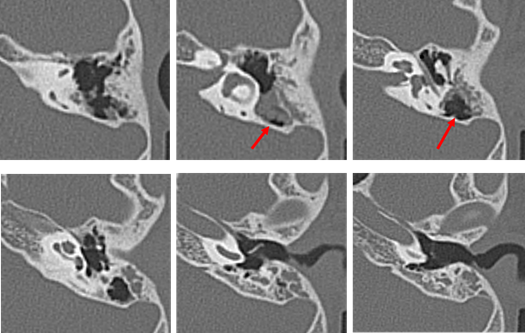 Figure 9: CT performed in April 2014 on the patient of Case 2 at 8 years old. There is no change in the findings around the ossicles. The soft shadow in the epitympanic attic and mastoid sinus (indicated by the red arrow) has decreased in size.

Additionally, the small perforations in the eardrum had closed. Surgery was performed in April 2014, and open type cholesteatoma and cholesterol granuloma were found in the attic and mastoid sinus, and the lesions were removed. The malleus was intact, the long process of the incus was defective, and the stapes were displaced backward in the structure, but no cholesteatoma was found around the ossicle. The cholesteatoma was evaluated as Potsic classification Stage II. At the time of this writing, the patient continues to follow up at the outpatient clinic (Figure 10).

Figure 10: Intraoperative findings in the patient of Case 2.

In these two cases reported here, we confirmed that cholesteatoma spontaneously regressed over time. In Case 1, the patient’s hearing loss deteriorated gradually and there was a reduction in the soft shadow seen by CT; however, the possibility of congenital cholesteatoma was high, and thus surgery was performed. During the operation, open type cholesteatoma was found around the stapes, and both crura were missing. This ossicular malformation was clearly attributed to cholesteatoma. In Case 2, small perforations were observed in the eardrum at first and, after CT, we suspected pars tensa cholesteatoma that had progressed to the mastoid cavity. However, the mastoid cavity lesion appeared to be separated from the ossicular defect, which was thought to be the cause of hearing loss. During surgery, the separation between the cholesteatoma and the defect was confirmed. Interestingly, the ossicle abnormalities were different from the congenital ossicular malformations that we usually experience, and thus we suspected that there had initially been a cholesteatoma surrounding the ossicles that had spontaneously regressed, leaving behind the ossicular transection. The differences between the two cases are 1. the locations of the cholesteatomas, 2. the separation between the cholesteatoma and the ossicle defect in case 2, and 3. the sizes of the cholesteatomas. Accordingly, the common points of these two cases are as follows: 1) the cholesteatomas were both open type, 2) the long process of the incus was damaged and 3) the crura of the stapes were disconnected from the footplate in both patients. In the report of two cases by Kodama et al., one of them CT showed the soft shadow suspected congenital cholesteatoma around the incudostapedial joint. It was operated on, and the cholesteatoma had regressed completely, so the type was unknown, but the long process of the incus was damaged.

If preoperative exams demonstrate regression of cholesteatoma, and there is no infection, bone destruction, impairment to ventilation in the middle ear, or deteoration of hearing loss, watchful waiting may be indicated. There were similarities and differences between our two cases. Future retrospective analyses should be done on the spontaneous regression of congenital cholesteatoma to identify independent factors that indicate “watchful waiting” for these patients.

We would like to thank Editage (www.editage.com) for English language editing.

There are no conflicts of interest to declare.