Subcutaneous panniculitis-like T-cell lymphoma (SPTCL) is a rare cutaneous T-cell lymphoma which can have initial clinical manifestations of life threatening hemophagocytic lymphohistiocytosis (HLH) as complications. Due to non-specific symptoms, it can also be misdiagnosed as autoimmune diseases initially. SPTCL alone has favorable prognosis with response to chemotherapy, but its complication with HLH necessitates aggressive treatment and hematopoietic stem cell transplantation due to poor prognosis. We herein present a case of SPTCL who presented initially with clinical pictures of HLH and misdiagnosed as adult onset still's disease, the accurate diagnosis obtained diagnosed later by biopsy of delayed skin eruptions. Monitoring the HLH patients for such a rare but lethal association is thus crucial.

Hemophagocytic lymphohistiocytosis (HLH)) is a rare but potentially fatal immune dysregulation disorder resulting from cytotoxic T lymphocyte defect with inappropriate immune activation and hemophagocytosis of macrophages. It is classified into primary form (familial HLH) and secondary form acquired HLH (sHLH). Both forms can be induced by triggering agents such as malignancy, autoimmune disorders and infections [1]. Despite the established clinic-pathologic criteria [2], non-specific clinical presentations of both HLH and underlying disease make the diagnosis a challenging one.

Adult-onset Still’s disease AOSD is one kind of autoimmune conditions which can lead to reactive HLH (12% to 56% of AOSD patients) [3]. Difficulties in differentiation between AOSD itself and that complicated by HLH exist, but pleuritis, acute respiratory distress syndrome, and cytopenia are rare in AOSD [4] and along with elevated liver function tests may raise the suspicion of complicating HLH [5, 6]. Malignancy associated HLH (mHLH) accounts for approximately 50% of adult HLH, and commonly found in hematologic neoplasms especially lymphoid cancers from T- or NK cell [7, 8]. mHLH is a presenting feature in 37% of subcutaneous panniculitis-like T-cell lymphoma (SPTCL) patients [9].

SPTCL is a rare, primary cutaneous lymphoma of αβ T-cell subtype presenting as skin nodules especially in the extremities with 15-20% of cases complicated by a potentially fatal HLH [10]. While it alone can have favorable prognosis with response to chemotherapy, association with HLH portends a worse prognosis, necessitating hematopoietic stem cell transplantation or target agent [11-13]. Awareness of the clinical presentations of HLH is crucial for timely diagnosis and appropriate treatment.

Case reports on HLH secondary to AOSD that is similar to lymphoma [14] and that progressed to lymphoma [15] have been published. We herein report a case of SPTCL confirmed by cutaneous biopsy of delayed full blown skin nodules, whose initial presentation mimicked AOSD with underlying HLH.

Patient provided informed consent before any data collection. Demographic data, laboratory et radiological investigations and details of treatment were extracted from the electronic database of Wanfang hospital. We investigated clinical characteristics and updated treatment options for SPTCL complicated with HLH according to recent publications.

Serologic tests for syphilis, HIV, and hepatitis B and C viruses, Epstein-Barr virus and cytomegalovirus were negative. Tuberculin and Coombs tests were negative. Antinuclear and anti-smith antibodies, rheumatoid factor, and cryoglobulins were negative. Computed tomography (C.T) scan of the whole body revealed right pleural effusion with basal lung collapse but no evidence of lymphadenopathy or malignancy. Pleural fluid surveys revealed exudative in nature with no evidence of malignancy on pleural biopsy. Bone marrow biopsy reported hypercellularity with hemophagocytosis. HLH with uncertain etiolgy was diagnosed and treatment with the HLH-94 protocol (including etoposide and dexamethasone) led to improvement in clinical condition and decline in serum ferritin level to 295 mg/dl.

Four months after the onset of HLH and two months after the completion of treatment, he presented with diffuse, hard, painful subcutaneous nodules over the body especially on the lower limbs. Biopsy of the lesions revealed atypical lymphocytic infiltrate of subcutaneous adipose tissue with panniculitis-like pattern and fat rimming that was compatible with SPTCL. Immunohistochemically, the atypical lymphocytes express beta F1, CD3, CD8, and granzyme B, but not CD4, CD20, CD30, CD56, Cd68, or CD123. EBER in situ hybridization was negative, excluding the diagnosis of extranodal NK/T-cell lymphoma. C.T scan of whole body showed lymphadenopathies at left supraclavicular region and left axillary region with increasing subcutaneous fat stranding along left chest and abdomen, mesentery and pancreatic tail, which were compatible with clinically noted panniculitis [16]. Bone marrow pathology also revealed more prominent hemophagocytosis but still no evidence of lymphoma involvement. He received treatment with EPOCH-R regimen and the skin lesions subsided. He was then referred to tertiary centre for bone marrow transplant. 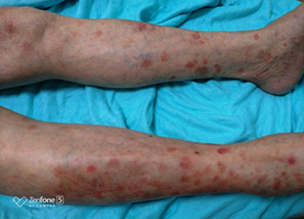 Figure 1: Inflamed skin nodules over both thighs and lower legs. 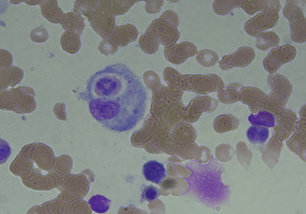 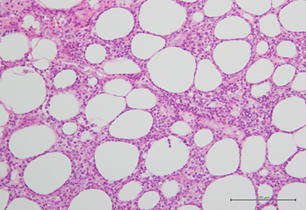 Due to the patient’s initial presentation of fever which was initially relieved by steroid, the preliminary diagnosis of AOSD was made. The differential diagnosis between AOSD, primary HLH or sHLH due to AOSD or sHLH of other origin was difficult at first. The persistent nature of thrombocytopenia and leucopenia contradicted with the criteria of lone AOSD in which leukocytosis is a major criteria. The progressive nature of the disease course with repeated pleural effusion despite administration of anti-inflammatory agent also excluded AOSD as a diagnosis. He received HLH-94 protocol regimen as his clinical manifestations (persistent fever, cytopenia, hyperferritinemia, hypertriglyceridemia and hemophagocytosis in bone marrow aspirate) fulfill 5 out of 8 HLH criteria. His symptoms resolved while the underlying disease remained uncertain until the delayed skin eruptions.

Primary cutaneous T-cell lymphoma is recently classified into γ/δ T-cell lymphoma and SPTCL of the α/β T-cell receptor phenotype according to specific TCR. The median age of diagnosis is around 36 years and associated with known autoimmune disorders. Germline loss of function mutations in T-cell immunoglobulin mucin 3 (TIM-3) were recenlty associated with 60% to 85% of SPTCL [18, 19]. SPTCL associated with HLH is rare with only a total of 25 cases, including our patient, has been reported.

The diagnosis depends on the pathologic examination of skin biopsy and TCR phenotyping of primary cutaneous T-cell lymphoma [20]. Our center lacked the facility to make further TCR gene rearrangement for the differential diagnosis between α/β or γ/δ TCR phenotypes beside germline mutations and the cytokine assays which pose a limitation to our case report. However, pathologic IHC staining could arrive at a final diagnosis of SPTCL. Our patient’s scenario was similar to those patients who lacked initial evidence of malignancy and were diagnosed pathologically as SPTCL 5-18 months after the initial diagnosis of HPS [13, 21].

Though the prognosis of SPTCL with no associated HPS is favorable, association with HLH reduces 5-year survival rate from approximately 91% to 46% [12, 13]. While treatment with systemic corticosteroids induced a complete remission in most patients with SPTCL without HLH [22], the survival rates did not differ between the intensive chemotherapy and CHOP regimen groups for those complicated with HLH [23, 24]. Some cases exhibited improved outcomes on allogeneic or autologous HSCT after multidrug chemotherapy, and even with JAK1/JAK2 inhibitors such as ruxolitinib recently [25, 26].

Regarding our patient, initial HLH was relieved by HLH-94 protocol including steroid which could, not only alleviated HLH symptoms, but also was beneficial for the treatment of undiagnosed SPTCL [27]. After the definitive diagnosis, we applied aggressive treatment with etoposide-based regimen followed by consolidation with autologous hematopoietic stem cell transplant with good response later.

This case highlights the challenging differentiation between SPTCL and AOSD complicated with HLH in the absence of skin lesions and biopsy. Given the potentially fatal nature and poor prognosis in association with sHLH, clinicians should be vigilant for such rare conditions with unusual presentations.

The authors report no conflict of interest.

We would like to thank the patient, the medical team members and laboratory technicians of Wanfang hospital for their dedications.

The first author researched the literature, and wrote the manuscript supervised by the corresponding author. All authors reviewed and approved the paper.