Gastroenteropancreatic neuroendocrine tumors (NETs) are graded as G1, G2, or neuroendocrine carcinomas (NEC), based on their proliferative activity determined using mitotic counts or the Ki-67 index and the World Health Organization (WHO) 2010 classification [1]. G1 NETs are synonymously referred to as carcinoid tumors. In Japan, the duodenum is the second most common site for G1 NETs, after the rectum [2]. Endoscopic treatment is generally recommended for G1 NETs < 10 mm in diameter and those that extend only to the submucosal layer [3]. However, endoscopic treatments, endoscopic mucosal resection (EMR) and endoscopic submucosal dissection (ESD) for duodenal tumors are technically difficult for endoscopists, due to the anatomical features of the duodenum, such as the narrow lumen and thin wall. In fact, several reports have demonstrated that severe complications, such as perforation and bleeding, frequently occur during and after endoscopic treatments [4, 5].

Pancreatoduodenectomy is considered the standard approach for the duodenal tumor resection [6, 7]. This conventional surgery approach, however, is still invasive especially for patients with such early duodenal tumors. Partial duodenal resection has also been attempted as an alternative treatment option for duodenal tumors such as mucosal adenocarcinomas and small submucosal tumors (SMT), which do not require lymph node dissection [8-10]. Though partial resection is not invasive, it is difficult to determinate the proper extent of resected lines. Recently, Hiki et al. [11, 12] reported on laparoscopic and endoscopic co-operative surgery (LECS) for gastrointestinal stromal tumors (GIST). This revolutionary procedure enables the precise assessment of tumor boundaries, thereby facilitating adequate tumor resection.

We thus report a rare case of NET at the second portion of the duodenum, resected by LECS. 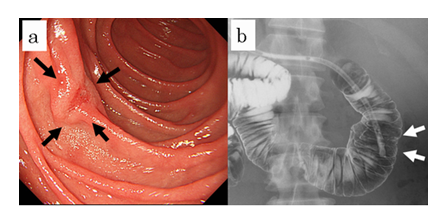 Under general anesthesia, a camera port was inserted into the inferior umbilical lesion. Four additional ports (three 5 mm ports and one 12 mm port) were inserted into the left upper, left lower, right upper, and right lower quadrants (12 mm port), respectively. This was performed under pneumoperitoneum using a CO2 insufflation system (UHI-4; Olympus Medical Systems Corp., Tokyo, Japan). Small intestine clamping was performed during the ESD procedure. The laparoscopic location of the tumor was confirmed by maneuvering the duodenal wall from the mucosal side, using the ESD-knife through the endoscope. After confirmation of the tumor location, both mucosal and submucosal layers around the tumor were dissected circumferentially with a minimum margin, achieved by using the ESD technique (Figure 2a).

Subsequently, a small artificial perforation of the seromuscular layer was created by the endoscopist using a needle knife (KD-1L-1; Olympus Medical Co., Tokyo, Japan) at a laparoscopically appropriate site under the surgeon’s instruction. The optimal perforation site represents the best site for the approach of laparoscopic devices insertion. Subsequently, the tip of the ultrasonically activated device was inserted into the perforation hole laparoscopically and the remaining seromuscular layer was dissected extremely easily along the incision line that was made by the ESD procedure (Figure 2b). After complete resection of the tumor, closure of the defect in the duodenal wall was done by the liner stapler after a few suturing techniques (Figure 2c). Finally, the LECS procedure was completed, and of the absence of air leakage and free passage of the endoscope past the repaired defect was confirmed endoscopically (Figure 2d).

With this approach, a curative operation was performed. A postoperative contrast study did not reveal stasis or stenosis at the suture site. Pathological examinations revealed a proliferative of atypical cells with hyperchromatic round to oval nuclei and eosinophilic cytoplasms arranged in cords or nests, invading the submucosa. Immunostaining for snaptophysin was positive, and the mitotic count was < 2% (Figure 3abc). The patient was discharged on the 10th postoperative day. At the time of this writing, he is doing well without recurrence at 3 months postoperatively. 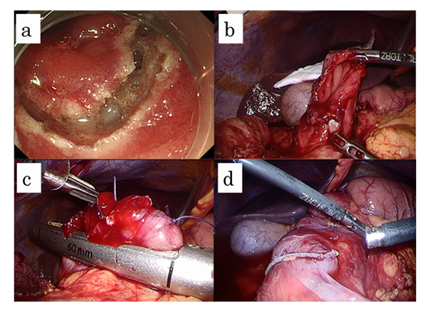 Figure 2: The laparoscopic and endoscopic cooperative surgical procedure performed for the duodenal neuroendocrine tumor. Full-thickness excision was performed along the marked dissection line using a needle knife (a). A post-excisional defect in the duodenal wall is shown (b). Closure of the defect in the duodenal wall was done by the liner stapler after a few suturing techniques (c). The endoscope passes the liner stapler site easily after the curative operation was performed (d). 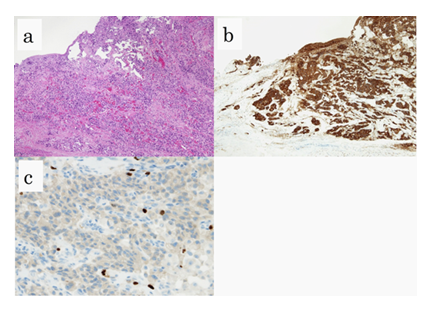 Figure 3: Pathological examinations. HE stains of tumor specimens (a). Positive immunostaining for snaptophysin (b). The immunostaining of Ki-67 indicated an index less than 2% (c).

Gastrointestinal tumors, composed of neuroendocrine cells, and showing characteristic histologies have been defined as “carcinoid tumors” since 1917. Oberndorfer et al. described these slow-growing, small, intestinal tumors and reported that patients generally have good prognoses [20]. Burke et al. reviewed 99 cases of duodenal carcinoid tumors and reported that these tumors had no mitotic figures when located in the submucosal layer and were < 1cm in size [21]. In 2010, the WHO classified NETs as G1, G2 or NEC, according to their mitotic count and Ki-67 index. Many cases of conventionally defined carcinoid tumors are equivalent to low proliferative potential G1 NETs. The European Neuroendocrine Tumor Society and Japan Neuroendocrine Tumor Society recommend endoscopic treatment for G1 NETs < 10 mm that do not extend beyond the submucosal layer and do not demonstrate lymph node metastasis. Patients with tumors > 20 mm, with lymph node metastasis, are indicated for surgical treatment [3, 22]. The treatment strategy for tumors 10-20 mm in size remains controversial.

ESD is wildly accepted for early intestinal stromal tumors, including NET G1 < 10 mm. ESD has the advantage of a higher probability of success for larger and more consistent lesion resections of lesions just above the muscle layer than that compared with EMR. However, the duodenal wall at the second or third portion is generally thinner than that of the stomach and ESD for duodenal tumors is associated with an increased risk of early and delated perforation [4, 5]. In addition, maneuvering the flexible endoscope is also technically difficult in the tiny duodenal lumen, and it was very hard to perform inverted scope maneuvers in the narrow working space of the duodenum [14]. However, conventional surgical operations may be excessively invasive for early duodenal tumors, and determination of the proper extent of resection for duodenal lesions is difficult.

LECS was first reported in 2008 by Hiki et al. [11] and has the advantage that the minimum extent of resection is marked and the full- thickness cuts, along the designated margins, are performed endoscopically. Additionally, the defect formed by the resection is also closed in a less invasive manner. There are many reports on the use of LECS for gastric lesions, including early gastric cancers, or GIST [11, 23]. Recently, modified LECS had been reported to prevent the peritoneal infections or scattering of tumor cells in the abdominal cavity for ulcerative SMTs or cancer lesions [24]. Only nine cases, including present case, have been reported on duodenal NETs treated by LECS. Five of nine cases underwent the LECS technique at the second or third portion of the duodenum. This surgical procedure can be performed safely without postoperative complications (Table 1). LECS is a safe and feasible treatment for duodenal tumor resection, in particular at the second or third portion of the duodenum, with sufficient margins and no postoperative complications.

The authors declared that they have no competing interests.

The informed consent for publication and presentation was obtained from the patient.

This work was no supported from any funding.

MY drafted the manuscript. HY, YK-F, NK, and HK acquired data, and MO, MT diagnosed pathological examinations. We added the special comments for TI as a specialist. All authors have read and approved the final manuscript.

We thank Mr. Fuminori Sakanashi for his technical assistances in immunohistochemical stainings.