Survival for Ten Years after Aggressive Surgery for Pericardial Recurrent Thymoma with Proton-Beam Radiation Therapy for An Unresectable Intramyocardial Lesion: A Case Report

There is no standard treatment for recurrent thymoma, although complete surgical resection reportedly achieves significantly better survival than other treatments. However, surgical treatment of recurrent thymoma in the pericardium is challenging because of the serious surgical stress and the adverse cardiac effects incurred by opening the pericardial space. We treated a female patient with a recurrence of thymoma 5 years after a complete response to radical radiotherapy. We removed the intrapericardial thymoma under cardiac arrest using an artificial-heart lung apparatus; however, we aborted our attempt to remove another intramyocardial lesion overlapping the left circumflex coronary artery. By 3 years after surgery, the residual intramyocardial tumor had increased in size, so we provided proton-beam radiation therapy. The patient has been well for 10 years after surgery with no sign of recurrence. We should consider aggressive treatment for patients in good general health, even for recurrent thymoma in the pericardium. Proton therapy might be effective for unresectable lesions because it appears to minimize damage to cardiac function.

Thymoma is the most common tumor in the anterior mediastinum, and surgical resection is the most effective treatment, typically achieving long-term survival. Unfortunately, recurrence affects 10% to 30% of patients, from a few months to several years after initial radical resection [1-4]. The best management strategy for recurrent thymoma remains controversial, although some authors report that complete resection of recurrent thymoma yields significantly better survival than subtotal resection or other forms of treatment [5, 6]. While local recurrence is reportedly associated with an excellent prognosis [7], there are no definite surgical indications to guide decision-making. Recommendations for using the extent, location, and number of recurrent lesions, or the general condition of the patient, to guide therapy would be useful. The mediastinum is reportedly the most frequent site of thymoma recurrence, accounting for 18.5% to 27.9% of reported recurrences [5, 8]. Treating recurrence in the pericardium is often difficult because of the sensitive location and the potential adverse cardiac effects of treatment. Cardiac movement disturbs the operative procedure, and radiotherapy is associated with cardiac complications such as pericarditis, myocardial infarction, and congestive heart failure [9, 10]. Proton therapy for thymoma is not yet standard, although it has a lower risk of cardiac toxicity than conventional radiotherapy [11].

We encountered a female patient with thymoma recurrent to the pericardium 5 years after radical radiotherapy. We performed radical resection of the tumor and later provided proton therapy for an unresectable intramyocardial lesion discovered at the time of surgery, with good results.

A 46-year-old woman was referred to us for a recurrent thymoma manifesting with symptoms of myasthenia gravis. Her initial lesion was treated with radiotherapy 5 years prior, with a complete response. The recurrent tumor was located in the pericardium, posterior to the heart (Figure 1). 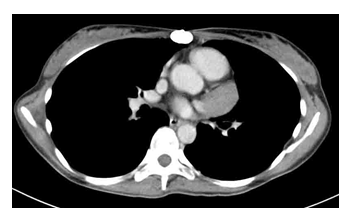 Figure 1: Computed tomography shows a tumor in the pericardium.

We opted for complete resection because the patient was young and in good physical condition, despite the symptoms of myasthenia gravis. Radical resection of the lesion was performed under cardiac arrest with cardiopulmonary bypass. During surgery, we were able to palpate a solid nodule within the cardiac muscle. We were suspicious for another recurrent lesion, but we left the intramyocardial lesion in situ because it overlapped with the left circumflex coronary artery. The resected lesion was examined pathologically, with a final diagnosis of type B2 thymoma according to the World Health Organization classification?system (Figure 2).

Figure 2: Pathologic examination of the resected specimen. (a) Gross appearance of the tumor and a portion of the pericardium. (b) High-power microscopy.

The patient required artificial respiratory management for 2 weeks after surgery because of complications from myasthenia gravis and a postoperative left pneumothorax. She was discharged on the 43rd postoperative day. The residual intramyocardial lesion was followed for 3 years. When computed tomography showed an increase in size (Figure 3), 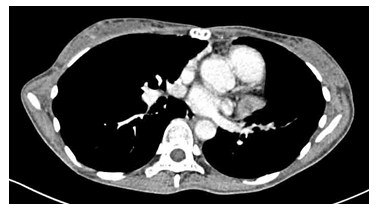 Figure 3: Computed tomography 3 years after surgery shows that the residual intramyocardial lesion has increased in size.

She was treated with proton-beam radiation therapy (50 Gy) at National Cancer Center Hospital East. She has required no further treatment, including oral steroids, and has been well for 10 years after surgery, with no signs of myasthenia gravis and no evidence of a recurrent lesion (Figure 4). 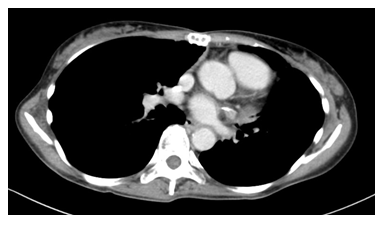 Ten years after surgery, echocardiography found no evidence of asynergy at the left ventricular wall, and the ejection fraction was good (77% using the Teichholz formula).

Many patients with recurrent thymoma experience locoregional recurrence; multimodal aggressive treatment reportedly improves overall survival [5, 6]. We performed radical surgical resection in a patient with recurrent thymoma in the pericardium after radiation therapy 5 years prior. Although we employed cardiac arrest with cardiopulmonary bypass, we were forced to leave behind a second recurrent lesion in the left myocardium because of its sensitive location. The intramyocardial tumor was eventually treated with proton beam radiation therapy, and the patient has been well, without evidence of recurrence, for 10 years after surgery. Ruffini et al report that 10-year survival after the treatment of recurrent thymoma is only 24% [7]. Therefore, intensive multimodal treatment is indicated for localized recurrent thymoma if patients are in a suitable physical condition, even when the lesion is in a sensitive location such as the pericardium.

The treatment of recurrent thymoma varies, and the optimal strategy remains controversial. However, it seems that surgery is the best method for achieving long-term survival when complete resection of the recurrent lesion is possible [5-8]. Margaritora et al note that repeat complete resection yields much better outcomes than partial resection (p < 0.001) [5]. Marulli et al. assessed 82 patients with recurrent thymoma and report that complete surgical resection is associated with significantly better survival than either incomplete resection or nonsurgical treatment (p < 0.0001) [6]. However, resection of a recurrent tumor in the pericardium is typically difficult because of cardiac motion. Ruffini et al note that involvement of the heart, ascending aorta, or main pulmonary artery usually prohibits radical resection [7]. Therefore, we initially considered radiotherapy for our patient. The radiotherapist at our hospital recommended against this tactic, because the additional radiation could increase the risk of cardiac mortality. We then planned for surgery under cardiac arrest because the patient was young, had only a single known lesion, and had no major comorbidities. We were able to successfully treat her recurrent disease, with later proton therapy for an unresectable lesion discovered during surgery.

The use of proton therapy for thymoma is still uncommon; only a few studies report the results of proton therapy for this indication. Vogel and associates describe achieving good local control with proton-beam radiation therapy for adjuvant and definitive treatment of thymoma and thymic carcinoma [10]. It seems that the primary advantage of proton therapy is its low risk of causing damage to mediastinal organs, particularly the heart [11], likely because of its characteristic Bragg peak, even though mediastinal radiation has been shown to increase the long-term risk of death from cardiac disease [12]. Our patient underwent proton therapy 7 years ago for an unresectable lesion and has experienced neither recurrence nor cardiac complications. Proton therapy is not covered by health insurance in Japan, but it should be considered when conventional radiation therapy is deemed risky because of prior radiotherapy.

We successfully treated a woman with recurrent thymoma in the pericardium using aggressive surgical resection and subsequent proton therapy for an unresectable intramyocardial lesion. We should consider radical surgery with multimodal therapy for patients with recurrent thymoma who have no evidence of distant recurrence. Proton therapy may be a useful option to avoid putting the mediastinal organs at risk.