Journal of Bioinformatics and Systems Biology

Citation: Ahmad Firdaus B Lajis. Effect of Chemical Pollutants on Craniofacial Development of a Zebrafish Embryo. Journal of Bioinformatics and Systems Biology 1 (2018): 001-010.

In past decades, Danio rerio has served as a fish model in various studies including genetics and developmental biology. Recently, this model has gained attention to evaluate several environmental toxicants (i.e., herbicide, pesticide, fungicide, component of a plastic product) which have been known to cause environmental pollution and affect aquatic life. In this review, recent study on craniofacial development of a zebrafish is described. This article discusses the effect of chemical pollutants to the craniofacial development of a zebrafish embryo focusing on articles published from 1995 onwards. Abstract of the prior articles were read and analyzed to determine its significance to be included in the discussions on the effect of these toxicants to the craniofacial and jaws development as well as facial morphology of a zebrafish embryo. From about 630 articles, 38 articles have been selected and included in this systematic review. Many of these toxicants are also apparently harmful to mammalian and human. Therefore, findings that have been demonstrated using zebrafish embryo are deemed useful as a guideline for a necessary action to be taken into consideration to protect human health and to ensure the standard quality of the aquatic environment.

Zebrafish (Danio rerio) has served as a promising fish model in various studies that includes genetics, developmental biology and therapeutic drugs development [1, 2]. In genetics of development, this model was exploited to study genes which control the development of specific organs [2-6]. Genes such as wnt, wnt9a, sonic hedgehog (Shh) and transcription factor AP-2 (Tfap2) are required for facial morphology as well as palate and lower jaw development [2]. It has been demonstrated that deficient in the expression of some genes in zebrafish mutants have been linked to some respective human diseases [2, 3, 6]. Zebrafish embryo has also been a very useful model to examine any possible developmental toxicity effects of many chemicals in which its organogenesis is completed within the first 48 h of development [3-5]. However, craniofacial bones and skeleton of a zebrafish only developed at about days-post-fertilization (dpf) [2]. Prior and recent analysis of craniofacial features of zebrafish such as sutures, cartilage, middle ear, palate, jaw and bone differentiation has increased the understanding about craniofacial development and skeletal biology in the zebrafish [5-9]. Proteins (i.e., SOX, Alx1) and deubiquitinases are important for craniofacial development (i.e., branchial arches and ethmoid plate) and regulate the cranial neural crest (CNC) cells differentiation/migration into the frontonasal primordial [9-11]. Hormones such as estrogen can affect the cartilage development of zebrafish embryo and displayed irregular craniofacial bone structure with significant craniofacial bone degradation [12].

Zebrafish embryo as a toxicological model as compared to higher vertebrate species offer great advantages in regards to their size, husbandry, and early morphology [2-5]. Small size molecules showed no difference on toxicological effect of zebrafish regardless of the presence or absence of chorion [3-5]. Compared to other fish species, matured zebrafish are about 3 cm long, thus reduces housing space and husbandry costs [1-3]. Besides their small size, zebrafish is very practical because of their high fecundity and transparent embryos [6-9]. Matured zebrafish can lay eggs every 5 to 7 days up to 300, thus allowing the use of high-throughput screening of potentially toxic compounds [1-3]. Despite of many endpoints studied for developmental toxicity study such as cardiovascular function, hatching rate, heart-beat rate, body length measurement, body shape, tail cellularity and other organs function, this current article attempt to review on the effect to chemical toxicants on craniofacial structures of a zebrafish embryo [7-9]. Recent research activity has been devoted to study the effect of various chemical compounds on craniofacial development of a zebrafish including compounds such as warfarin, acetaldehyde, penicillin G, retinol, hydrocortisone, retinoic acid and acrylamide [7-10, 12-15]. Facial malformation is related to deformation of cartilage, bone, and tooth position during embryonic development. These chemical may interfere with the expression of certain proteins such as Forkhead-domain transcription factors (Fox) and Sox9a which has been recently identified important for cartilage development (i.e., morphogenesis and differentiation) and allow cell progenitors to form cartilage and teeth in the face [9]. Hence, in this review, recent study on craniofacial development of a zebrafish is described with focus of discussion related to the effect of chemical pollutants to the craniofacial development of a zebrafish embryo.

Searches were performed using NCBI PubMed and NCBI PubMed Central. These databases provide coverage of high-quality, peer-reviewed articles and patents in the fields of zebrafish pigmentation. Searches were performed from January 2018 to November 2018 and articles published after 1995 were selected for review. Terms and keywords relating to “zebrafish” and “Craniofacial” or “toxic” and “developmental toxicity” were used in the searches. Searches in NCBI PubMed resulted in 630 articles and the contents were reviewed. In this review, the articles referred must be related to zebrafish craniofacial developmental studies. Studies that did not meet the inclusion criteria were excluded.

In total, 592 studies were excluded as their abstracts do not significantly relate to zebrafish and craniofacial. The full texts of the remaining 38 studies were reviewed. A final total of 38 articles were selected for inclusion in this review. The process of article selection is featured in Figure 1. 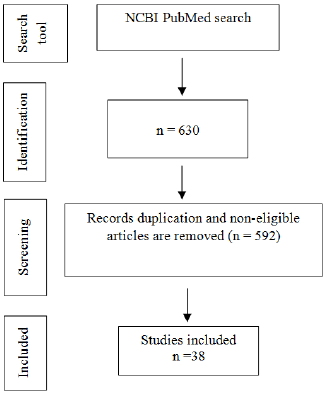 Figure 1: Flow chart showing the process of selecting the relevant studies for the systematic review. 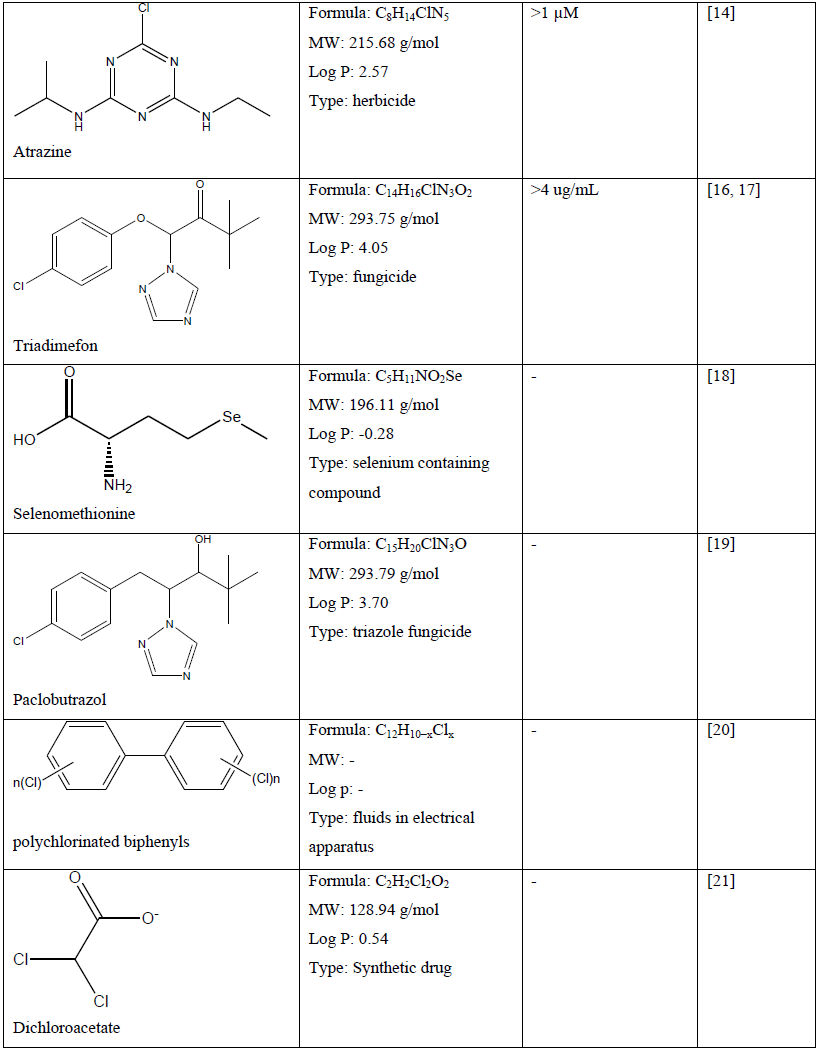 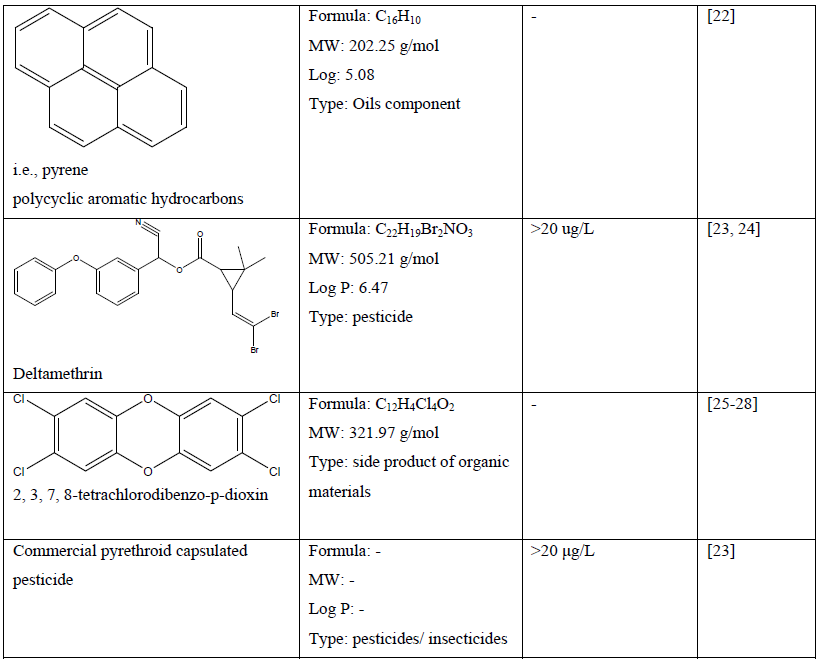 Table 1: Chemical compounds and their chemical property and effect on craniofacial development of a zebrafish embryo.

Because of the universal utilisation of various chemical in crops and agricultural products, many herbicides, pesticides and fungicides are widely discharged in environmental soil and water, which may cause pollution and pose a serious threat not only to aquatic life and ecosystem but also to human [11, 16, 17, 23, 24, 29]. Recent study demonstrated that atrazine (C8H14ClN5) at concentration of more than 1 µM caused craniofacial defects which may be related to delayed vertebrae mineralization as well as malformation to the development of cartilage and bone of a zebrafish embryo [13]. Other chemical compounds such as bisphenol A (C15H16O2) and its analogues at concentration of 1.0 to 200 mg/L has shown craniofacial deformities to zebrafish embryo which related to their estrogenic mechanism [14]. In comparison, embryo exposed to the encapsulated pyrethroid-lambda-cyhalothrin formulation at concentration of greater than 20 μg/L experienced craniofacial malformations as well as deformation of body morphology and development of pericardial edema [23]. Moreover, pyrethroid ester such as deltamethrin (C22H19Br2NO3) at a concentration dependent manner resulted in misexpression of some gene such as sonic hedgehog (shh) which later leads to phenotypic deformation with reduced eyes size and larger head to body ratio [24]. Some other effect of severe craniofacial phenotypic defect can be observed to delayed formation of the scleral ossicles within the eye, reduced eyes size, deformed jaws as well as reduced craniofacial bones with abnormal skull shape [23, 24].

On the other hand, zebrafish embryo exposure to triadimefon (C14H16ClN3O2) developed craniofacial and pharyngeal arches defects in a concentration dependent manner which prominent defect can be observed at concentration of greater than 4 ug/mL [16, 17]. Pharyngeal arches are transient multifaceted embryonic structures positioned next to the eye and below the ear. These defects lead to significant loss of forebrain-midbrain structure with reduced sized and flattened forebrain [17]. Another triazole fungicide such as paclobutrazol (C15H20ClN3O) negatively affects craniofacial cartilage formation in zebrafish embryo [19].

In a study, selenium containing compounds such as selenate and selenite which may potentially leach from agriculture and mining site did not produce any craniofacial malformation in zebrafish embryo at concentration tested [18]. Nevertheless, L-selenomethionine (C5H11NO2Se) showed significant abnormality and deformation to some part of zebrafish embryo structure [18]. Another study showed that a well-known toxicant 2, 3, 7, 8- tetrachlorodibenzo-p-dioxin (C12H4Cl4O2) promote the expression of FoxQ1b gene which suggested to play part in abnormalities of jaw primordium and craniofacial structure [25]. The 2, 3, 7, 8-tetrachlorodibenzo-p-dioxin has been also linked to reduction of sox9b expression in zebrafish embryo which leads to developmental jaws deformation [30]. The smaller jaw size is due to a decrease in both the size and number of chondrocytes in the developing craniofacial cartilages [26, 27]. Other effect of 2, 3, 7, 8-tetrachlorodibenzo-p-dioxin includes reduce ossification of osteoblasts in the perichondrium of craniofacial cartilages and disrupt dermal-perichondrial bone growth of the craniofacial skeleton in the zebrafish larvae [25-28, 31]. Polychlorinated biphenyls such as non-ortho polychlorinated biphenyl 126, mono-ortho polychlorinated biphenyl 28 and di-ortho polychlorinated biphenyl 153 showed craniofacial malformations (double head, triple retina) in a concentration-dependent manner [20]. In comparison, polycyclic aromatic hydrocarbons (PAHs) such as pyrene, dibenzothiophene or phenanthrene reduced the size of the jaw and affect other craniofacial skeleton structures of zebrafish embryo [22]. Nitrite treatment at 1, 000 mg/L and hydroxylated polybrominated diphenyl ethers at concentration greater than 50 nM on zebrafish embryo caused craniofacial malformation, decrease in head trunk angle, lower jaw deformities and craniofacial cartilage malformations [32, 33].

Several attempts have been made to correlate findings on the effect of toxicants in zebrafish embryo to higher vertebrate organisms (i.e., rodents, Xenopus). For instance, triadimefon and cyproconazole administrated at 300 mg/kg and 20 mg/kg daily respectively to rats showed severe craniofacial, axial skeletal malformations and abnormal buildup of cerebrospinal fluid (CSF) in the brain of rat embryos [16, 17]. Pyriproxyfen, at concentration of more than 5000 mg/kg daily caused health problems to mammalian models (i.e., mice, rats and dogs) while at concentration of 5.2 μM renewed daily resulted craniofacial defect in zebrafish embryo [34].

In summary, several chemical and organic compounds from insecticides and herbicides, such as pyrethroids, triadimefon, 2, 3, 7, 8-tetrachlorodibenzo-p-dioxin, organophosphates, neonicotinoids have the potential adverse effect on craniofacial structure of zebrafish embryo. Despite relevant application of zebrafish model to study the effect of developmental toxicants to aquatic life, this model is also a useful experimental tool which provides an excellent alternative to a mammalian model in the future. Many other studies also demonstrated that these toxicants are apparently harmful to mammalian and human. Therefore, findings that have been demonstrated using zebrafish embryo may serve as a guideline for appropriate action to be taken into consideration to ensure the standard quality of the aquatic environment and protect human health.

Journal of Bioinformatics and Systems Biology