The Cardioprotective Effect of Leonurine in Hearts

leonurine (4-guanidino-n-butyl-syringate) is a bioactive alkaloid present in the traditional Chinese medicine Herba leonuri (1). In recent years, leonurine has been confirmed to treat cardiovascular diseases and has cardioprotective effects (2, 3), such as anti-oxidation (4), vasodilation (5), treatment of acute and chronic myocardial infarction (6) and ischemic stroke (7), anti-atherosclerosis (8). Recently, growing evidence has shown that leonurine played a protective role in the pathogenesis and development of heart diseases such as myocardial fibrosis (9). A study reported that leonurine could prevent cardiac fibrosis and the activation of cardiac fibroblasts partly through modulation of a NADOH Oxidase-Reactive Oxygen Species (Nox4-ROS) pathway (10). However, the mechanism of leonurine on myocardial fibrosis remains unclear. In this review, we summarize the physiological functions of leonurine and mainly explore its mechanism in myocardial fibrosis. Furthermore, we also discuss the molecular mechanisms involved in the cardioprotective effects of leonurine and how these might be used to overcome myocardial fibrosis.

Drug metabolism refers to the process of changing the chemical structure of a drug under the action of a variety of drug-metabolizing enzymes in the body such as liver drug enzymes. Clarifying the metabolism of leonurine in vivo was beneficial to understand the pharmacological mechanism of leonurine. Qing Z et al. found that an approach of HPlC/MS/MS could apply to the identification of metabolites of leonurine in rats (11). They also reported that HPlC/MS/MS could simultaneous quantify leonurine and stachydrine, the two main bioactive components in leonurus japonicus houtt (12). They firstly identify three metabolites including two phases II metabolites (M1 and M2) and one phase I metabolite (M3) in animal samples. M1 (MRM 488-312) was the main metabolites and M2 and M3 were the minor metabolites in vivo. M1 (MRM 488-312) was glucuronide metabolite of leonurine, M2 (MRM 392-312) was tentatively assigned as an O-sulfate conjugate, leonurine-10-O-sulfate. M3 (MRM 298-167) was identified as an O-demethylated leonurine and its possible structure was 4-guanidinobutyl 3,4-dihydroxy-5-methoxy benzoate (13, 14). Moreover, M1 had greater bioactivity than the prototype drug and the glucuronide metabolite could prolong the pharmacological effect of the parent drug trough an enzymatic or nonenzymatic hydrolysis (15, 16).

3.1 Roles of leonurine in Myocardial Fibrosis

Myocardial Fibrosis (MF) refers to the appearance of normal myocardial tissue with cell proliferation and excessive deposition of extracellular matrix (ECM) (17, 18). MF is a type of chronic ischemic heart disease. Myocardial cell proliferation is dominated by a variety of non-cardiac cells, and more than 90% are cardiac fibroblasts (CFBs). CFBs are also important cells regulating the synthesis and degradation of ECM. CFBs proliferate and differentiate into specific conditions, and the formation of myofibroblasts is a key link to MF (19). At the same time, myofibroblasts secrete collagen, and collagen I and III are important for maintaining the structure of myocardial tissue and heart function (20), and the main mechanism of MF is shown in Figure1. 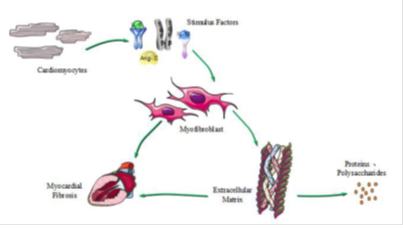 In myocardial fibrosis models, they have been demonstrated clearly that methylation had effects on pathways of different stimulating factors (21). Pan et al. found that TGF-β inhibited DNA methyltransferase (DNMT) activity, thereby increasing collagen I expression (22). Watson et al. also found that hypoxia-inducible factor-1α (HIF-1α) promotes the expression of DNMT1 and DNMT3, reducing the expression of collagen I and α-smooth muscle actin (α-SMA), and also inhibiting the TGF-β profibrotic effect (23). Recently, many studies have shown that DMNTs could inhibit the activation and proliferation of CFBs. The specific mechanism is closely related to the level of DNA methylation, leading to a reduction in the generation of fibrosis. However, the mechanism of DNMTs such as DNMT1, DNMT3A, and DNMT3B on myocardial fibrosis is not clear. 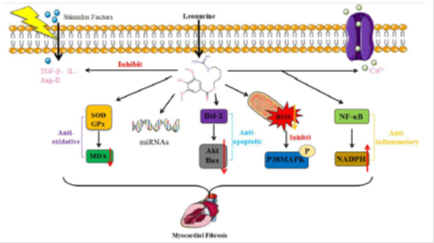 Inflammatory is one of the most common reactions to most cardiovascular diseases. Studies have found that the most inflammatory factors had a regulatory effect on myocardial fibrosis. liu et al. found that leonurine stimulated NF-κB signaling activity to reduce TNF-α, Il-6, NADPH expression and play an anti-inflammatory effect (26, 27).

MicroRNAs (miRNA) are the class of non-coding single-stranded RNA molecules about twenty-two nucleotides in length encoded by endogenous genes, and most microRNAs play a role in myocardial fibrosis such as microRNA-24 and micro-221/222. Yuan et al. found that microRNA-378 was cardiac-enriched and highly inhibited during cardiac

3.3 Roles of leonurine in Other Cardiovascular Diseases 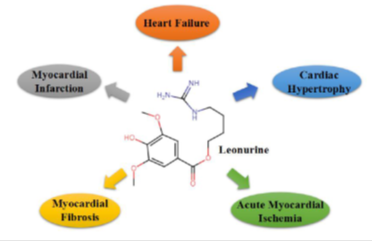 Table 1: The effects of leonurine in cardiovascular diseases

Myocardial infarction (MI), one of the ischemic heart diseases, remains the leading cause of death in the world (36). It occurs when a coronary artery is occluded, leading to insufficient oxygen supply to the myocardium and the most typical feature of MI is hypoxia (37, 38, 39). Recently, there are increasing evidence shows that leonurine is beneficial to cure MI. leourine increased phosphorylation of AKT and expression of hypoxia-inducible factor-1 (HIF-1), surviving vascular endothelial growth factor (VEGF) in rat models (9). leonurine significantly alleviated collagen deposition and MI size to inhibite cell apoptotic effect and improved myocardial function (40).

Heart Failure (HF) is caused by impaired contraction and diastolic function of the heart, resulting in inadequate venous return to blood to the heart, leading to venous system stasis and insufficient blood perfusion in the arterial system, and leading to cardiac circulatory disorders. However, HF isn’t an independent diseases, but the end stage of the development of heart disease. Recently, evidence show that leonurine plays a role in relieving HF. leonurine provided protective effects on ischemic myocardium by acting as free radicals scavengers and inhibiting the formation of ROS (41).

Cardiac hypertrophy is a powerful form of compensation, but it isn’t infinite. If there isn’t remission, the heart function may not be able to maintain normal for a long time and eventually turning to heart failure (42). Recently, only some studies show that leonurine has an inhibitory effect on cardiac hypertrophy. It had been reported that leonurine may reverse cardiac muscle cell hypertrophy by regulating p38 mitogen-activated protein kinase (p38MAPK) and downstream the gene expression (43).

Myocardial ischemia refers to reduced blood perfusion of the heart, resulting in reduced oxygen supply to the heart, abnormal energy metabolism in the heart muscle, and can not support normal heart work. Acute myocardial ischemia is a condition in which myocardial ischemia occurs in a short time. It had been reported that leonurine-cysteine reduced MDA and ROS levels to protect certain cellular organs and related expression of apoptosis-related genes and proteins, such as Bcl-2 and Bax (44).