#Authors contributed equally to this work

Herein, we first reported a case of undifferentiated sarcoma with epithelioid features harboring TFE3 amplification. A 66-year-old woman with a history of chronic lymphocytic leukemia and chemotherapy presented with a 4 cm palpable nodule in the left lower leg. Microscopically, the large epithelioid tumor cells with remarkable pleomorphism and the small round tumor cells intermingled with each other in a diffuse sheet or a hemangiopericytoma-like vascular growth pattern. Atypical mitotic figures and lymph node metastasis were found while tumor necrosis was absent. Immunohistochemically, the tumor was positive for vimentin, TFE3, and CD34. TFE3 gene amplification was identified by fluorescence in situ hybridization. The patient was alive and well without recurrence or metastasis for 12 months after tumor resection. The tumor should differentiate from PEComa, alveolar soft part sarcoma, epithelioid sarcoma, epithelioid angiosarcoma, and epithelioid rhabdomyosarcoma.

A 66-year-old woman presented with a 4 cm palpable and painful nodule in the left lower leg that was detected approximately 1 month before consultation. The patient had a history of chronic lymphocytic leukemia and had been treated with chemotherapy 8 years ago. The therapy was effective and completed 2 years ago. The familial history was uneventful. Magnetic resonance imaging revealed an oval juxtacortical lesion with a well-defined margin to the anterolateral left tibia, measuring 4.9 × 2.4 × 1.2 cm. Periosteal reaction of the tibia was identified, indicating its aggressiveness. Neither cortical erosion nor marrow infiltration was observed (Figure 1A-E). Tumor resection was performed.

Grossly, the resected specimen consisted of multiple fragments with gray or white on cut surface, measuring 6 × 3 × 2 cm in size. Microscopically, the well-circumscribed but unencapsulated lesion displayed variable cellularity. Two morphologically distinct types of tumor cells intimately intermingled with each other and were arranged in a diffuse sheet or a hemangiopericytoma-like vascular pattern (Figure 2A). One type of tumor cells was the large epithelioid cells with remarkable cytologic atypia. The abundant eosinophilic cytoplasm was homogeneous, granular, or vacuolated. The appearance of large hyperchromatic nuclei ranged from oval to polygonal and centric to eccentric. Multinucleated giant cells with up to three to four nuclei per cell, were not uncommon. Prominent eosinophilic nucleoli and intranuclear inclusions were observed (Figure 2B). The other type of tumor cells was the small round cells with an oval or irregular nucleus. The cytoplasm was scant without a distinct cellular boundary. Myxoid stromal change was evident focally, imparting a relative hypocellular appearance (Figure 2C). Small- to medium-size blood vessels were scattered throughout the lesion. Lymphocytic infiltration was identified and was prominent along the perivascular spaces. Atypical mitotic figures were abundant in the large epithelioid tumor cells but less remarkable in the small round cells (Figure 2B). Tumor necrosis was absent. Tumor metastasis was present in one lymph node (Figure 2D). Immunohistochemically, both the components were diffusely positive for vimentin, TFE3 (Figure 3A), and CD68 (Figure 3B), partially positive for CD34 (Figure 3C), and retained the nuclear expression of INI1. The tumor cells were negative for CK, desmin, myogenin, MyoD1, SMA, HMB45, MelanA, MiTF, STAT6, CDK4, MDM2, S-100 protein, CD31, CD163, FLI-1 and MPO. The Ki-67 index was up to 60% in the hot spot area (Figure 3D). 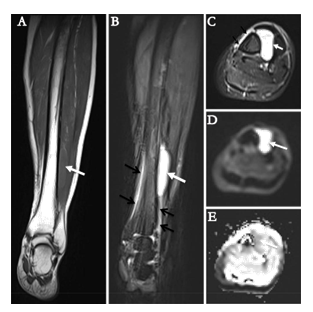 Figure 1: Radiological characteristics illustrated by magnetic resonance imaging. The tumor (white arrows) appeared iso-intense on coronal T1WI (A), hyper-intense on coronal (B) and axial (C) T2WI with fat-suppression. It appeared hyper-intense on diffusion-weighted image (b=800 s/mm2) (D) with corresponding decreased apparent diffusion coefficient values on apparent diffusion coefficient map (E), indicating diffusion restriction. The periosteal reaction of tibia was noted on T2WI with fat-suppression (black arrows on B and C). 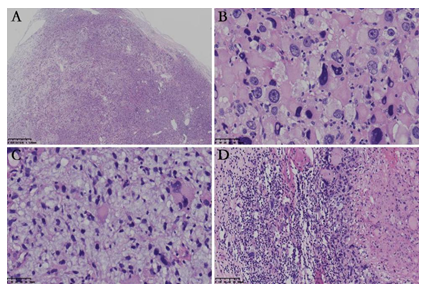 Figure 2: Histological characteristics of the tumor. (A) The well-circumscribed lesion was unencapsulated with variable cellularity; (B) Large epithelioid tumor cells with marked nuclear pleomorphism arranged in a diffuse sheet pattern. Atypical mitotic figures were identified; (C) Small bland cells bear oval or irregular nuclei and scant cytoplasm, with large epithelioid cells in between. Myxoid stromal change was prominent; (D) Metastasis was identified in one lymph node. 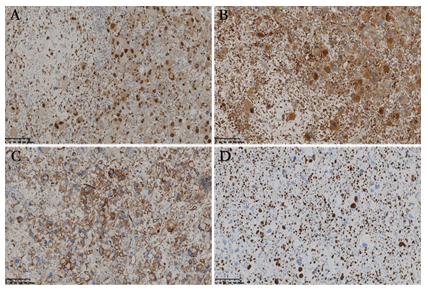 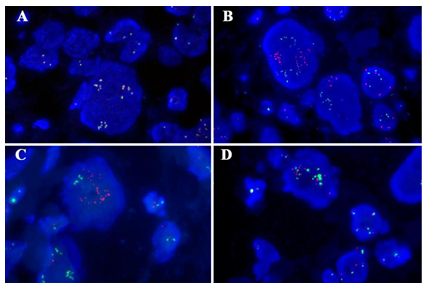 Figure 4: Genetic characteristics of the tumor. (A) TFE3 break-apart probe showed no TFE3 rearrangement but TFE3 gene amplification by FISH. The TFE3 probe contains a 627 kb probe labeled in green, which lies proximal to the TFE3 gene that located at Xp11.2 region, and a 637 kb probe labeled in orange extends distally from the TFE3 gene. (B-D) Gene fusion of TFE3 with PRCC(B), ASPSCR1(C) or NONO(D) was not identified by FISH with gene fusion probe. Green, the 5′- terminal region of the TFE3 gene; orange, the 3′- terminal region of the PRCC/ASPSCR1/NONO gene, respectively.

Undifferentiated sarcoma with epithelioid features harboring TFE3 amplification is very rare. The tumor should differentiate from several tumors. Based on the morphological and genetic features, PEComa is a strong consideration for the diagnosis. PEComas can be composed of epithelioid and spindle cells arranged in a hemangiopericytoma-like vascular pattern. TFE3 is positively expressed in a number of PEComas resulting from gene fusion [12]. TFE3 gene amplification, a characteristic finding in the present case, has also been documented in three cases of PEComas; all of these PEComas were found in adults and showed predominant or pure epithelioid morphology. Among these, two cases displayed marked atypical large cells with abundant eosinophilic cytoplasm, nuclear anaplasia, and multipolar mitotic figures, sharing histological overlaps with the present case. However, tumor cells in PEComas commonly are positive for melanocytic and smooth muscle markers; all the three cases were positive for Melan-A and actin/SMA, two were positive for HMB45 [8-10], whereas none of Melan-A, HMB45 and actin/SMA were expressed in the present case. Therefore, evidence for classifying the tumor as PEComa is insufficient.

Several sarcomas including ASPS, epithelioid sarcoma, epithelioid angiosarcoma, and epithelioid rhabdomyosarcoma should be differentiated from our diagnosis. ASPS typically is composed of large eosinophilic cells in nest or pseudoalveolar growth pattern delineated by fibrous septa. Increased cytologic pleomorphism and nuclear pleomorphism are uncommon but have been described [13]. ASPS demonstrates nuclear expression of TFE3, resulting from the oncogenic fusion or rearrangement of TFE3 with ASPSCR1 on chromosome 17 [5]. However, such characteristic chromosomal translocation was not detected by FISH in the present tumor. The intracytoplasmic accumulation of rod-shaped crystals, which is another specific character of ASPS, could be found in a majority of the cases. Both epithelioid sarcoma and epithelioid angiosarcoma are composed of diffusely arranged large tumor cells with abundant eosinophilic cytoplasm, vesicular nuclei, and prominent nucleoli. As for epithelioid sarcoma, especially in the proximal-type, pleomorphism is prominent [14]. It is one of the few mesenchymal neoplasms that metastasize to lymph nodes. However, epithelioid sarcoma is positive for CK and EMA, and usually loss of nuclear INI1 expression [15]. Epithelioid angiosarcoma presents irregular vascular spaces lined by protuberant epithelioid tumor cells which usually positive for endothelial markers such as CD31, CD34, ERG and FLI-1 [13]. In contrast to the obvious cytologic pleomorphism in the present case, cells and nuclei in epithelioid rhabdomyosarcoma tend be relatively uniform in size. Skeletal muscle differentiation should be proven based on immunostaining for myogenin and myoD1 [16].

The most common chromosomal abnormalities involving TFE3 are translocations and rearrangements, and are among the earliest reported gene fusion in tumorigenesis [17-18]. TFE3 gene fusion can occur with different partners, such as PRCC, ASPSCR1, SFPQ, and NONO, all of which provide active gene promoters, and therefore, lead to higher levels of TFE3 fusion proteins than wild-type TFE3 [5, 19-20]. Apart from PEComas, it has also been confirmed in four cases of renal cell carcinomas with moderate to strong nuclear expression of TFE3 [11]. An interesting finding is that it might be associated with aggressive biological behavior [8-11]. As for renal cell carcinoma, patients with TFE3 amplification exhibited a significantly poorer cancer-specific survival rate than those with translocation [11]. As for PEComas, distant metastasis and recurrence were documented [8-10]. In the present case, tumor aggressiveness has been suggested by radiological examination, and one lymph node metastasis was identified.

In conclusion, we present a case of epithelioid undifferentiated sarcoma with characteristic genetic alteration. Even comprehensive immunohistochemistry and molecular examination could not help in classifying the tumor under any of the existing soft tissue tumor classification. Therefore, we designated it as epithelioid undifferentiated sarcoma with TFE3 amplification. Our report indicated TFE3 amplification as an additional chromosomal abnormality might induce increased expression of TFE3 protein, and suggested the possible relationship between the genetic alteration and aggressive biological behavior of tumor.

Disclosure of Conflict of Interest