Methods: This was a double-blind, cross-over trial. Twenty-three CF patients (aged 6 – 19) infected by P. aeruginosa were randomised to received: cholecalciferol 1000IU or cholecalciferol 1000IU and omega – 3 1000 mg daily for three months. The levels of IL-23 and IL-17A in the exhaled breath condensate (EBC), calcium-phosphorus balance and serum lipid balance were measured. Data were analysed using means of Stata/Special Edition, release 14.2.

Conclusions: Omega-3 supplementation with cholecalciferol may provide some benefits and modulate the immunity response in airway CF patients with chronic P. aeruginosa infection reflected as reduction of the level of IL-23 in EBC.

Cystic fibrosis (CF) is a most common life-shortening autosomal recessive diseases in Caucasians. Opportunistic pathogens such as Pseudomonas aeruginosa (P. aeruginosa) is connected with progressive loss of lung function due to excessive inflammation. Pro-inflammatory cytokines mainly secreted by neutrophils such as interleukin 17A (IL-17A) and interleukin 23 (IL-23) are critical for neutrophil recruitment in a chronic P. aeruginosa pulmonary infection [1-6].

The anti-inflammatory role is attributed to polyunsaturated fatty acids (PUFA): linoleic acid (18:2 omega-6) and alpha-linolenic (18:3 omega-3). They are essential for normal growth and function, play an important role in the integrity of cellular membranes. Essential fatty acids deficiency was reported in more than 80% of CF patients due to poor nutritional status and its impact in tissue destruction has been well demonstrated [7-10]. Clinical trials performed on CF patients have revealed that oral supplementation with omega-3 modifies fatty acid profiles [11] and improve nutritional, clinical, spirometry and inflammatory parameters [12-14]. Some beneficial effects of omega-3 on an inflammatory disease which is CF can be explained by a decrease in the production of pro-inflammatory metabolites. Still, there is not enough evidence to draw firm conclusions or recommend the routine use of these supplements in people with CF [15].

Vitamin D insufficiency in CF patients is common due to the high prevalence of fat soluble vitamin malabsorption and impaired hydroxylation in the liver. Most of them require oral supplementation to avoid its deficiency. The role of vitamin D in maintenance of bone and mineral homeostasis is known. Simultaneously its supplementation may contribute to reduce inflammation and improved lung function in patients with CF. Vitamin D exerts a direct regulatory effect on T cells, inhibiting T cell proliferation and IL-17 production what is connected with exaggerated inflammatory response to pulmonary infection [16-20].

This was a randomized, placebo-controlled, double-blind, cross-over trial. Twenty-three CF patients from twenty-five assessed for eligibility agreed to participated in the study. There were 11 women and 12 men between 6 and 19 years, all of them completed the intervention. All of them were attending the Cystic Fibrosis Outpatient Clinic in Copernicus Hospital in Lodz, Poland. The demographics and clinical characteristics of the study participants are shown in Table no 1. The chronic P. aeruginosa infection were defined as more than 50% of the monthly sputum samples positive for P. aeruginosa in the previous year. The subjects who had an exacerbation - deterioration of the FEV1 and/or increase in symptoms and/or documented radiological changes and were on intravenous antibiotic therapy for at least 4 weeks before the study were not included to the trial. Prior to the trail the participants used 800 IU of cholecalciferol (according to the previous valid recommendation [21]) and did not take PUFA supplementation.

The study was carried out from May to November 2016. At all three study visits collection of EBC, serum and urine samples and spirometry took place. Informed consent was obtained from all patients and their parents. The study was approved by the local ethical committee no RNN/21/14/KE. Randomization and treatment assignment were carried out by research pharmacy by standard allocation procedures. Only blind treatment codes were noted on randomization lists provided to study staff. All study staff and participants remained blind to treatment assignment.

At the first visit all 23 participants were randomly assigned to the group: 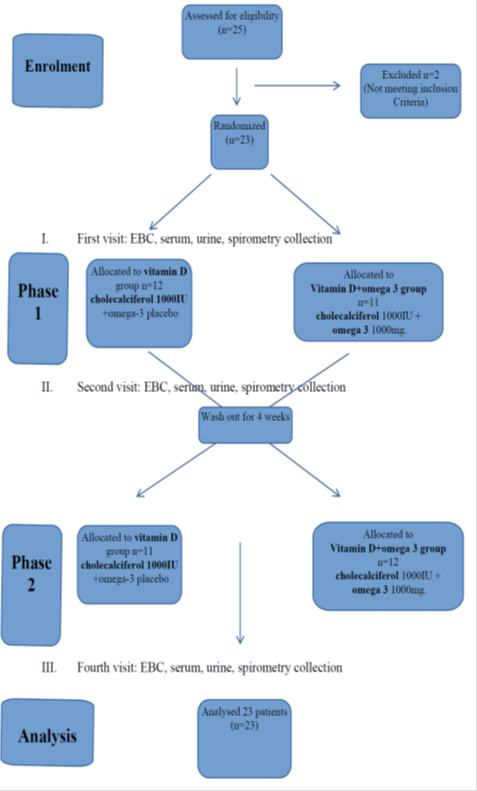 Collection and analysis of EBC

The EBC was sampled by a commercially available condenser (EcoScreen; Jaeger) according to the current ATS/ERS guidelines. Samples of the EBC were obtained from subjects during tidal breathing while wearing a nose clip. The two-way non-rebreathing valves and tubing to the condenser served as a saliva trap. After a 10-minute collection, the EBC was rapidly frozen in small plastic tubes at 80 °C by using dry ice and was stored at 80°C until analysis. All EBC samples for biochemical markers of inflammation were measured by Laboratory of Cytometry, at Cathedral of Molecular Biophysics at the University of Lodz. The level of IL-23 was conducted by using separate competitive enzyme-linked immunosorbent assay kits ELISA (ELISA Quantikine, R&D Systems) and IL-17A by using enhanced sensitivity cytometric bead array (BD™ CBAray, Biosciences). All the assays were performed according to the manufacturer’s instructions.

The investigated traits were described by way of measures of location – mean, along with measures of dispersion – standard deviation, 95% confidence interval, and minimum-to-maximum values.

A level of P < 0.05 was considered statistically significant. All the statistical computations were carried out by means of Stata/Special Edition, release 14.2 (StataCorp LP, College Station, Texas, USA).

The present cross-over study comprised the total of 23 patients, the baseline demographics of the study groups were included in table 1. Detailed descriptive measures are displayed in Table 2.

The assessment of 25 OH D serum level seems to be the best to assess the effectiveness of cholecalciferol supplementation. The blood concentration of 25OHD significantly augmented, observing both study arms. The difference between the two study arms was not statistically significant (p = 0.320), which indicates that both investigated “regimes” were efficacious to a similar extent (Figure 3).

The level of PTH increased due to the supplementation in vitamin D group (p = 0.314), whereas it decreased when the study participants were being supplemented with omega-3 fatty acid 1000 mg + cholecalciferol 1000 IU (p = 0.150). Albeit the discussed changes were not statistically meaningful. The difference between the two study arms was statistically significant (p = 0.011).

After 3 months of treatment we found no changes in IL-17 level in EBC in both study arms as well as in FEV1, ALT, and lipid balance values in our patients (Table 2).

Table 2: Descriptive statistics for analyzed measurable traits in the studied patients by study arm and phase of the study

Mixed-effects regression models with robust standard errors, due to the small sample size, were performed: a – considering repeated measurements in the two separate studies;

b – considering the above-mentioned repeated measurements, along with differences between the two studies and intra-subject correlation, on grounds of the cross-over study design.

All statistical calculations were controlled for the studied patients’ age and sex.) 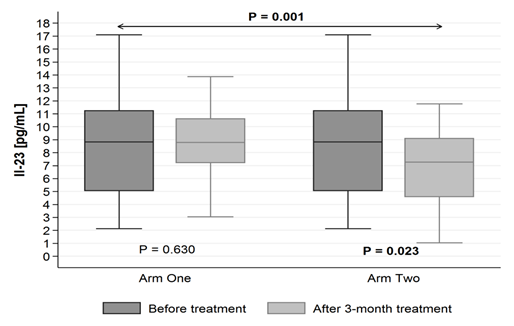 Figure 2: Changes in the blood concentration of IL-23 (pg/mL) in the studied patients before and after 3-month treatment by study arm. 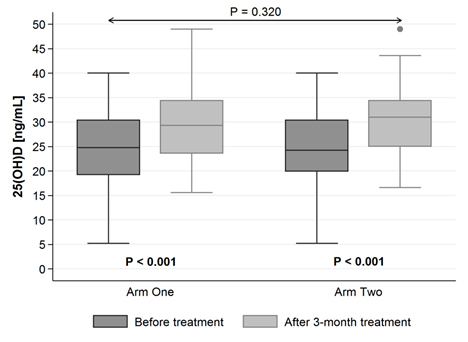 Figure 3: Changes in the blood concentration of 25OHD (ng/mL) in the studied patients before and after 3-month treatment by study arm.

The persistent inflammatory response in the airways connected with T helper type 2 and Th17 T cells activation, which stimulates IL-17A/IL-23 axis to IL-23 production is believed to play a central role in the progression of lung damage in CF patient infected with P. aeruginosa [16,18-20, 23]. In this pilot study, we observed that administering 1000 mg of omega-3 per day together with 1000 IU of cholecalciferol per day significantly reduced IL-23 in EBC in CF patients with chronic P. aeruginosa infection. Furthermore, the level of IL-23 in the exhaled air did not statistically significantly change due to the supplementation with cholecalciferol alone (1000 IU per day). Additionally, the blood concentration of 25OHD significantly increased in both study groups. In vitamin D + omega-3 group the beneficial changes in PTH level were noticed. Both treatments had no other effect on calcium-phosphorus metabolism as well as serum lipid balance.

The dominant neutrophilic type of inflammation in the pathophysiology of CF lung inflammation has been established [24,25]. Other study have previously shown that airway IL-17 and IL-23 are connected with infection status and antigen presenting cells (such as dendritic cells) are activated by bacterial antigens in the bronchial mucus layer to produce IL-23 [3,5]. Available studies reported elevated IL-23 protein levels in bronchoalveolar lavage of CF patients during exacerbation and its decreased after antibiotic therapy [26]. Others have shown that elevated levels of IL-23 in sputum are observed also in clinically stable CF patients with chronic infection with P. aeruginosa CF [1].

Long-chain PUFA - linoleic acid (omega-6) and alpha-linolenic (omega-3) are essential for normal growth and function in humans. Essential fatty acids deficiency was reported in more than 80% of patients suffered from CF due to defects in fatty acid metabolism and fat malabsorption [9-11]. This imbalance of n-3 and n-6 in cell membranes causes overall suppression of the anti-inflammatory pathway mediated by omega-3 metabolites and exacerbation of the inflammatory pathway mediated by metabolites of arachidonic acid, which is the most common n-6 PUFA [27]. PUFA disorders in patients with CF may contribute to the inflammatory process and correlated with disease severity. It may lead to progressive tissue damage. Clinical trials performed on CF patients have revealed that oral supplementation with omega-3 modifies fatty acid profiles in both plasma and cell membrane levels [11] and down-regulate the production of inflammatory mediators and thus improve clinical outcomes. The results of present study also confirm the findings of previous reports. We observed decreased of IL-23 level in EBC in patients supplemented with omega-3, what is more the therapy was well tolerated by CF patients, we did not noticed modification in the liver enzyme, total cholesterol and LDL cholesterol. The anti-inflammatory effect of omega-3 on the airways has been demonstrated previously [7-9,11,12,15] and PUFA supplementation in CF patients, often for short time, was shown to reduce inflammatory markers [28,29].

The other date demonstrated that omega-3 display a positive relationship as wall as with lower inflammatory status and better lung function [13,30]. Whereas we did not observe modification in the values of FEV1.

In this pilot study, selective inhibition of IL-23 level in EBC, an inflammatory marker in CF airway, might represent a high-priority target for CF therapy. The major limitation to our pilot study is a small sample size. Larger CF population and longer study will be required to confirm improvement of pulmonary inflammation and to determine the influence of disease severity, dosage and duration of treatment.

It has been known that vitamin D has anti-inflammatory effect. It inhibits proliferation, maturation and differentiation of dendritic cells, which leads to decrease activation and proliferation of T cells [16-18]. T cells, in turn, produce interleukin IL-17 which stimulate IL-23 production [31]. Surprisingly, we did not observe statistically significant changes of IL-23 and IL-17 due to the supplementation with cholecalciferol alone (1000 IU per day). This is probably related to low dose of administered cholecalciferol what is the limitation of our study, as we were using earlier valid guidelines [21]. In this pilot trial, despite administering only low dose of vitamin D the blood concentration of 25OHD significantly augmented observing both study arms. What is more in vitamin D + omega-3 group this increasing was bigger and it was reflected in favorable changes in parathyroid glands and lowering of the PTH concentration in serum. Our results generate a hypothesis that taken together (with omega-3) cholecalciferol exerts some immunomodulatory effect and is more efficient at improving vitamin D status, which would speak in favor of using a combination supplement. Larger studies are needed to test this hypothesis. This study has generated novel observations that need to be follow- up in larger long-term placebo-controlled studies.

In summary, this trial found that regular omega-3 supplementation with cholecalciferol may provide some benefits for people with CF and plays an anti-inflammatory effect. We demonstrated the ability of such supplementation to modulate the immunity and inflammatory response in airway CF patients with chronic P. aeruginosa infection reflected as reduction of the level of IL-23 in EBC.

All authors state no conflict of interests