Elemental composition of “Jeevanti” Leptadenia reticulata (Retz.) Wt. & Arn. (Asclepiadaceae) had been studied. Quantitative estimations of Fe, Cu, Mn, Zn, Pb and Ni in leaf stem and root parts were determined using Atomic absorption spectrophotometer. The trace elements in leaf, stem and roots of this plant differed significantly but do not exceed the limiting values set by WHO. Therefore the use of these parts of the plant medicinal purpose is safe.

Ayurveda, the ancient Indian system of medicine prescribes the use of various plant parts of L. reticulata such as leaves, roots, fruits and stem for curing a variety of ailments [40]. Several western scholars have pursued the analysis of Indian plants and herbs for their medicinal properties [34, 43]. Most studies on medicinal plants are pertaining to organic constituent’s viz., essential oils, glycosides, alkaloids, phenols, flavonoids, vitamins, antioxidants compounds and their pharmacological activity together with toxic effects [38, 23]. However, scanty reports are available about their trace elemental composition or mineral contents. It is now well recognized that many trace elements play a vital role for general well being as well as in curing diseases [28, 21]. The role of metal in curing ailments was first realized in Ayurveda as several metallic preparations with organic molecules, often referred to as Bahamas in Ayurvedic literature, are widely used for treating a variety of disorders [24]. It has been suggested that herbal preparations of Indian medicinal plants have antioxidant activity because of antioxidants which act in a synergistic way [34]. Thus data on major, minor and trace elements in medicinal herbs are of great importance to understand their therapeutic actions [41].

The present study was conducted with the objective of assessing the major and trace elements such Fe, Cu, Mn, Zn, Pb and Ni from different parts viz., leaf, stem and root of Leptadenia reticulata which are used in the treatment of several diseases in Indian traditional medicinal systems i.e., tridoshas, stimulant, nose and skin infection, abortifacient, toxic, restorative, bactericidal, antifabrifuge, wound healer and mounth ulcer [14, 8]. Roots used in Ayurvedic/ herbal formulation [4], galactogouge [2, 3]. Hence, trace elements play a very important role and often toxic, so, their assessment is essential which could potentially be either dangerous or useful to human beings.

The plant materials leaf, stem and roots were separately collected from Khanapur Forest of Bidar District, Karnataka India and identified and authenticated using Flora of Gulbarga District [37]. The herbarium was preserved in Herbarium Gulbarga University, Gulbarga at Department of Botany specimen No. HGUG-801).

Figure 1: a. A view of Khanapur forest canopy; b. A view of Pandargera forest 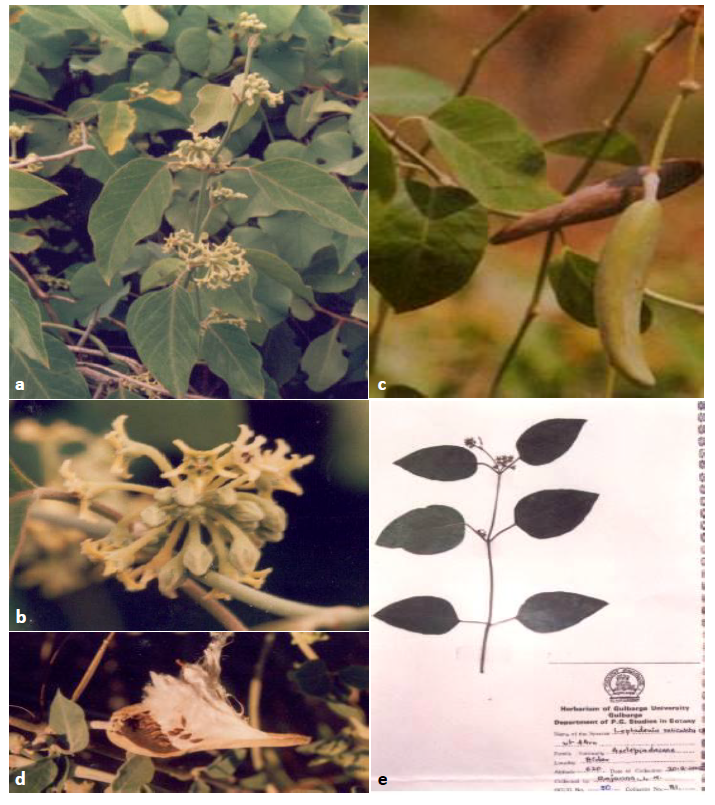 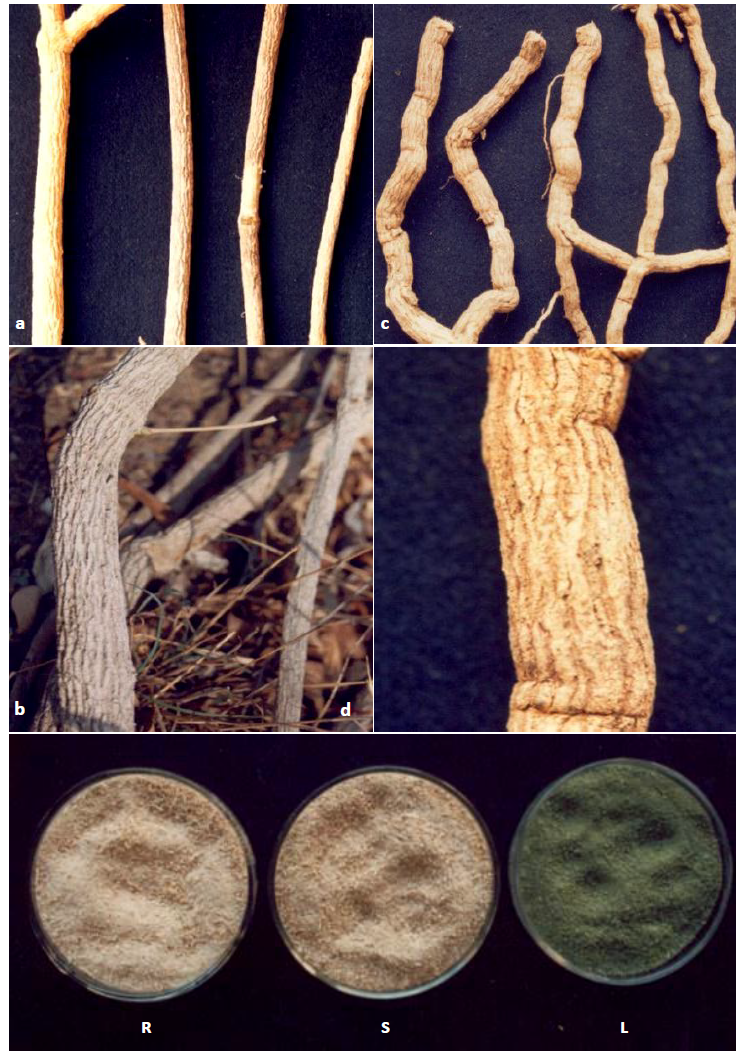 Five gram of dried leaf, stem and root was powdered and taken in the pre-weighed clean sintered Silica crucibles. It was ignited by gradually increasing the temperature (400-5000C) in the Muffle furnace for 6 h. The heated crucibles were gradually cooled to room temperature in a desecator containing CaCl2 and the weight of ash content was determined in an electronic digital balance (Anarmed make) [29].

The total ash content thus obtained was boiled for 15 min after adding 25 ml of 25% (v/v) HCl and allowed to cool. It was filtered through Whatman filter paper No. 44 (ash less). The insoluble ash thus retained on filter paper along with paper was ignited in a pre weighed sintered crucible (1000C). This was allowed to cool by keeping in the desecator for 30 min. the crucible along with residue was weighed and calculated the acid insoluble and acid soluble ash content.

One gram of each ash samples was dissolved in 25 ml of Dil. HCl (1% v/v) in the china dish and incubated for 20-25 min. on hot water bath and filtered through a Whatman filter paper N. 44 (Ash less). 10 ml of filtrate was taken in a 100 ml volumetric flask and made its final volume to 100 by addition of distilled water. This solution was further diluted to 10 times with distilled water, and solutions were used for the detection and estimation of elements using automated atomic absorption spectrophotometer (ASS) (Smith-Hieftje 1000, Termajarrrell Ashh Co., Franklyn MA).

Table-2: Trace element detection in L. reticulata; Data in the table are the value of three replicates; Mean ± SE

The average content of Fe from three different parts of L. reticulata is 0.1173 ± 0.0046 ppm/100 gm (Table - 2). The highest amount of Fe is recorded in the root (0247 ± 0.007 ppm/100 gm) followed by leaf (0.213 ± 0.003) and stem (0.139 ± 0.004 ppm/100 gm). It is observed that the variation of iron content in different parts tested is due to the presence of different metabolites in different parts of the plant. Iron being an important component of hemoglobin responsible for oxygen transport in human body. The deficiency of it cause anemia [7]. The normal tolerable range of iron is 15-20 mg/day, the amount of iron present in L. reticulata falls within the permissible range clearly indicate the use of plant as medicine or food is safe to the criteria of WHO. Similar, kind of reports has been reported by Sheded et al., (2006) [39] in Pergularia tomentaosa Fe concentration is high and Somundralwar and Garg, (1996) [33] recorded the concentration of Fe in Tulsi (Ocimum sanctum) and Neem (Azadirachta indica) are 129 and 355 µg/g-1 respectively and suggested that Fe requirement for animals ranges between 30-100 ppm and the maximum tolerable level for cattle is 1999 ppm [18-20].

The total dietary concentration of 200 ppm Cu on the dry basis could probably be tolerated by man for prolonged periods. Cereal grains normally contain 46 ppm and leafy plants contain 25 ppm. It is an important element for plants involved in various metabolic pathways and constituent of several enzymes which participate in photosynthesis, respiration and metabolism of protein and carbohydrates.

Manganese resembles iron and zinc in having a low order of toxicity in mammals and birds. The adverse effects of excess manganese on growth are mainly a reflection of depressed appetite. High Mn intakes are known to depress hemoglobin formation and the concentration of iron in the blood serum, liver, kidney and spleen of several species. Mn toxicity in man arising from excessive intakes of this element in foods has never been reported except industrial contamination. The average concentration of Mn in common foods range from 20-30 ppm in nuts, cereal and leafy vegetables. The total dietary Mn intakes by adult man vary from about 2-8 mg/day. The average content of Mn is recorded in L. reticulata is 0.0563 ± 0.0080 ppm/100g plant material. Highest Mn content is recorded in leaf (0.0741 ± 0.013) followed by root (0.052 ± 0.006) and stem (0.043 ±0.005), the similar reports are seen in several medicinal plants. According to Sheded et al., (2006) [39] the amount of Mn ranges between 44.6 - 339 mg/kg-1 highest amount is recorded in Acacia ehrenbergiana and lowest amount in Balanites aegyptiaca. Reddy and Reddy (1997) [32] reported that the range of Mn in their study was 10-81 mg/kg-1 in medicinal leafy plants.

The role of Zn in human health and nutrition is much more likely to be related to inadequate or marginal intakes than to the very remote possibility of toxic intakes from ordinary foods or beverages. However, cases of Zn poisoning in humans due to the prolonged consumption of water from galvanized pipes and vessels have been reported [22, 15] due to excess of Zn, observed stiffness and pain in the muscles of the back and neck loss of appetite and nausea [47]. The physiological activities of the plant influence the Zn absorption and the interaction with many elements like Fe, Mn and Cu, affects Zn uptake [10]. Zn is the component of more than 270 enzymes [48] and its deficiency causes many physiological disorders. Average content of Zn is recorded from three different parts of L. reticulata 0.0686 ± 0.063 ppm/100g. The leaf contains higher amount of Zn (0.083 ± 0.007), stem (0.069 ± 0.005) and root (0.054 ± 0.007). From the result it is clear that all part estimated i.e., leaf, stem and root show variation in the Zn content and it is second abounded element after Fe in the estimated all parts, due variation in phytoconstituents present in different parts. The normal intake of Zn level is 12-15 mg/day. The concentration of Zinc in Ocimum sanctum and Azadirachta indica leaves which are widely used in Indian medicine were 140 and 10 µg/g respectively [33, 39] reported from six medicinal plants, among which higher amount of Mn recorded in Solenostemma arghel (73.7 mg/kg) lowest in Balanites aegyptiaca (15.4 mg/kg).

Biological interest in Lead has largely been confined to its toxic properties as an industrial hazard to man and animals [47], most of the human foods contain less than 1ppm Pb when uncontaminated. Cow’s milk normally contains 0.02-0.08 ppm Pb [6, 17], average intake of the food an adult man have been variously estimated to ranges 0.22-0.4 mg Pb/day. This approximates 0.3 - 0.5 ppm of the dry diet [16, 25, 35], in addition to smaller amounts of Pb ingested with the drinking water and are inhaled from the atmosphere. The access intakes could lead to harmful accumulation in the tissues and is excreted mainly in the faces [11, 25] and causes toxicity symptoms like anemia, chromic nephritis, encephalophathy etc. [42]. In the present investigation an average 0.0263 ± 0.0053 ppm/100 gm estimated from the different parts of L. reticulata. The higher amount Pb is recorded from stem (0.035 ± 0.003), leaf (0.23 ± 0.005) and root (0.025 ± 0.008). Similar, types of studies on medicinal plants has been reported by Razic et al., (2003) [41] in Echinacea purpurea. Sheded et al., (2006) [39] reported the presence of major and trace elements in several medicinal plants growing in the south Eastern Desert, Egypt. Indrayan et al., (2005) [9] studied determination of nutritive vale and analysis of mineral elements for some medicinally valued plants from Uttaranchal.

Nickel has a low toxicity when orally ingested, due to poor absorption and causes no detectable damage [26, 27]. On the other hand exposed workers in Ni refineries exhibit a high incidence of respiratory tract neoplasia and dermatitis [44] and Ni has been implicated as a pulmonary carcinogen [46]. The level of Ni necessary to induce signs of toxicity in experimental animals is for greater than those that could be obtained from normal human dietaries. Human adults consuming a good mixed diet ingest approximately 0.3-0.6mg /day [12, 36]. The present study an average content of Ni is recorded from three different parts L. reticulata is 0076 ± 0.0016 ppm/100g. The higher amount recorded form stem (0.009 ± 0.002), leaf and root (0.007 ± 0.001). Sunde et al., (1997) [21] stated that presence of heavy metals in plant reduces the uptakes of iron and alters its distribution whereas, toxicity symptoms can appear when the Ni/Fe ratio in the plant is greater than unity [13].

Trace elements in various tissues of plants greatly affect pharmacotherapeutic properties preparations obtained from the plants. As it is known plants synthesize organic compounds in photosynthesis, including those pharmacologically active principles from various mineral components. While, it is believed that the synthesis of organic compounds involves over 20 elements. It is an indigenous edible and medicinal plant used in traditional medicine for curing of several ailments, this study indicates that some of these plants parts accumulate certain elements and this property is exploited by the use of these parts for medicinal purposes in addition to their bioactive secondary metabolites constituents. The estimation of elements specification in these parts helps interpret the therapeutic actions and may help in designing chemically pure medication. L. reticulata falls within the permissible range, results clearly indicate the use of plant as medicine or food is safe to the criteria of WHO.

We are thankful to Head of Department, Department of Science Instrument Center, Gulbarga University, Gulbarga, for providing necessary spectroscopic facilities for analysis of trace elements.