Trajectories of Hospitalization in three Groups of Patients with Incurable Gastric Cancer Identified by Hierarchical Clustering: A Retrospective Analysis

Purpose: The therapeutic goal for advanced solid malignancies is not to achieve cure but to prolong survival and maintain quality of life (QOL). To date, no study has reported the trajectory of the QOL throughout the clinical course of a patient with advanced malignancy. As hospitalization is considered a predictor of QOL, we retrospectively analyzed the trajectory of hospitalization in patients with incurable gastric cancer throughout the clinical course.

Results: Three clusters were identified corresponding to short, intermediate, and long OS/hospitalization (Clusters 1, 2, and 3, respectively). Patients in Cluster 3 were more likely to have an ECOG PS of 0-2 and receive palliative chemotherapy than the other clusters. No other differences in histology, age, sex, and or extra-peritoneal metastasis sites were observed between the three groups. In Cluster 3, planned hospitalization accumulated gradually during the early clinical phase, while unplanned hospitalization accumulated rapidly in later phases.

Typically, QOL is evaluated using a questionnaire, and many studies that address changes in QOL are limited to specific phases of the clinical course. However, hospitalization is considered a predictor of QOL [6]. This variable can be divided into planned and unplanned hospitalization, of which the latter is generally considered unfavorable for patients. To date, no study has reported the trajectory of hospitalization throughout the clinical course. Gastric cancer was the fifth most common malignancy and the third leading cause of cancer-related mortality in 2018, according to Global Cancer Statistics [7]. Gastric cancer is even more common in Japan, with the second highest incidence and third highest mortality rate of all cancers according to a short-term projection method applied by the Projected Cancer Statistics 2018 [8]. Therefore, the first aim of this study was to classify patients with incurable gastric cancer, according to OS and hospitalization and clarify the characteristics of the resulting groups. The second aim was to analyze the trajectory of hospitalization throughout the clinical course.

We retrospectively evaluated 85 patients with incurable gastric cancer who attended the Miyagi Cancer Center (Natori, Japan) between May 2014 and February 2018 and died up to May 2019. This study collected the following data: age, sex, ECOG PS, treatment (palliative chemotherapy vs. BSC), histology, sites of metastases at first consultation, OS, hospitalization (planned and unplanned), and the trajectory of hospitalization. Histologically, patients were divided into two types: intestinal type or diffuse type. The mixed type, which included both the intestinal and diffuse types, was categorized as the latter. The sites of metastases were the peritoneum, liver, lymph nodes, bone, anastomotic site/remaining stomach, lung/pleura, adrenal gland, others (ovary, skin, and brain), and locally advanced disease. The oncologist explained the benefits and limitations of palliative chemotherapy and BSC to all patients during their first consultation.

We used a hierarchical clustering analysis method to classify the patients based on OS and hospitalization. We then used the square of the Euclidean distance dissimilarity coefficient to determine the similarities or differences between patients. The results of the clustering analysis are presented in a dendrogram chart. The ECOG PS, treatment, histology, age, sex, and sites of metastases in the groups were compared using the chi-square test. A two-tailed P-value of <0.05 was considered significant. OS curves were estimated using the Kaplan-Meier method, and comparisons of survival between clusters were performed using the log-rank test. All statistical analyses were performed using the Statistical Package for the Social Science for Windows (version 24; SPSS Inc., Chicago, IL, USA). 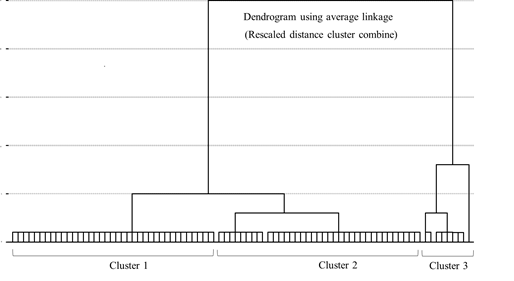 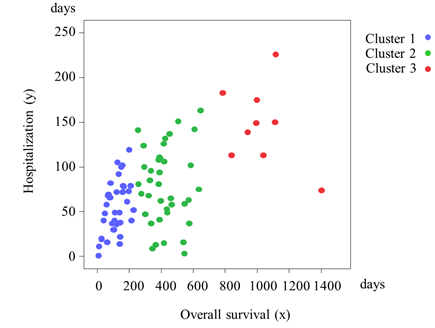 Figure 2: Correlation between overall survival and hospitalization in patients with incurable gastric cancer. 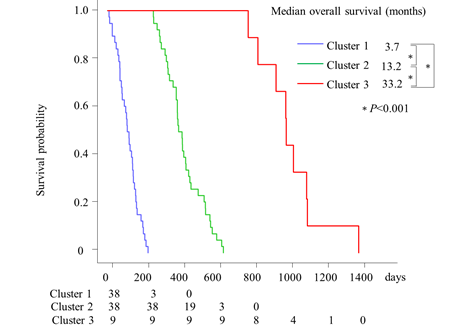 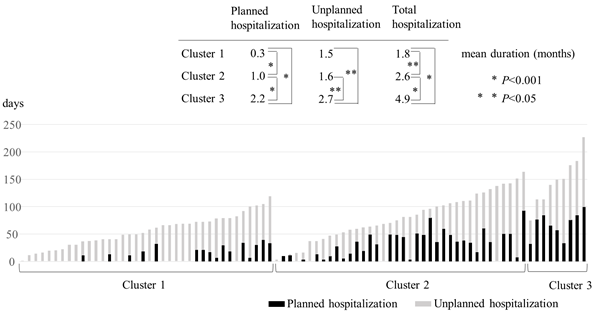 aClusters 1, 2, and 3 were characterized as the short, intermediate, and long OS/hospitalization groups, respectively.

Table 1: Characteristics of the three groups clustered by overall survival and hospitalization duration. 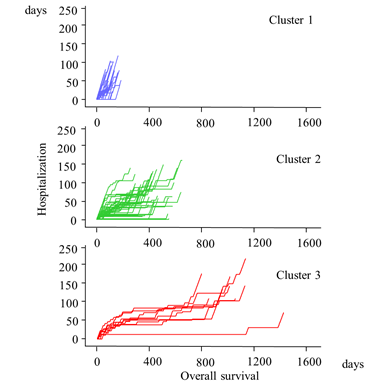 Figure 5: Trajectories of hospitalization vs. overall survival in three groups of patients with incurable gastric cancer.

ECOG PS and palliative chemotherapy have been reported as independent prognostic factors for OS [9, 10]. Specifically, patients with a good ECOG PS are recommended to undergo palliative chemotherapy [11], and a meta-analysis of randomized controlled trials of advanced gastric cancer reported that chemotherapy extended OS by 6.7 months relative to BSC [12]. In this study, we accordingly classified patients into clusters and determined that patients in Cluster 3 were most likely to have an ECOG PS of 0-2 and to have received palliative chemotherapy compared to the other clusters. We noted that metastases of the peritoneum, lymph nodes, bone, lung, ovary, and brain have also been identified as potential prognostic factors for OS [13-17]. In this study, only the likelihood of peritoneal metastasis differed, with a higher incidence in Cluster 2 relative to the other clusters. These results might be attributable to the use of data collected at the first consultation which did not account for newly developed metastases.

Lauren’s histological classification classifies gastric cancers into two histological subtypes, intestinal and diffuse, as this variable has been reported to predict survival and responses to chemotherapy [18, 19]. In this study, however, we did not observe a significant association of either type with a long OS. We noted that the histological diagnoses in our cases were generally made from biopsy rather than surgical samples. Therefore, the diagnoses might not have reflected the true nature of the disease. In contrast to histology, age is not generally considered a prognostic factor in patients with advanced gastric cancer, and several studies reported that palliative chemotherapy is equally tolerable and effective in older and younger patients [20, 21]. Consistent with those observations, we did not observe an association of age with a long OS.

QOL has become increasingly important as the number of newly diagnosed patients with cancer continues to increase. Over time, improvements in the management of certain chemotherapy-associated toxicities have led to a shift from issues of physical QOL to issues of psychosocial QOL [22]. The most widely used measures of cancer-specific health-related QOL are the European Organization for Research and Treatment Quality of Life Questionnaire, version 3.0 (EORTC-QLQ-C30), McGill QOL questionnaire, and the EuroQol-5D (EQ-5D) [23]. These questionnaires have been used to investigate the trajectory of QOL among advanced-stage cancer patients in several studies [24, 25]. However, the physical and/or mental condition of the patient may make it difficult to administer a questionnaire, particularly if the patient has a poor ECOG PS and has reached the end-of-life stage. Moreover, many studies of the changes in QOL experienced by patients with incurable cancer patients are limited to specific clinical course phases, such as limited cycles of chemotherapy or phase III chemotherapy trials [26, 27].

Hospitalization has negative effects on the QOL. However, this option is needed in many situations. Planned hospitalization is necessary for the administration of palliative chemotherapy, radiation therapy, and surgery. In contrast, unplanned hospitalization is generally needed to treat chemotherapy-related toxicities and cancer-related symptoms and is especially undesirable for patients [28, 29]. Patients with end-stage disease exhibit a significant loss of QOL during hospitalization [30]. Notably, one previous study suggested the importance of an optimal discharge-planning system and early referral to palliative care to prevent hospital readmission [31].

The Japanese healthcare system features a unique combination of characteristics that have led to the overuse of tests and drugs, as well as relatively longer hospital stays than those in other countries [32]. One study reported that 27% of older patients in Japan experienced ≥90 days of hospitalization during their last year of life [33]. For patients with incurable malignancies, decision making regarding treatment is complex; therefore, oncologists need to assist the patients and their families [34]. In decision making, not only OS but the trajectory of QOL throughout the clinical course might be helpful.

The major strength of this study was the classification of patients with incurable gastric cancer into three groups by OS/hospitalization as well as our analysis of various characteristics of these groups, including planned and unplanned hospitalization.

This study has several limitations. We used planned/unplanned hospitalization as a predictor of QOL; however, other factors are also associated with psychosocial QOL. In this study, predicting the length of OS/hospitalization was challenging. In the future, predicting OS and the trajectory of QOL throughout the clinical course is essential.

Availability of data and materials

Ethics approval and consent to participate

All procedures performed in studies involving human participants were in accordance with the ethical standards of the institutional and/or national research committee (Miyagi Cancer Center, reference number: No. 4, March 13, 2019) and with the 1964 Declaration of Helsinki and its later amendments or comparable ethical standards. This article does not contain any studies with animals performed by any of the authors.

According to the local ethics policy for the retrospective analysis of anonymized in-house clinical data, information about this study and a means of opting out were posted on a website.

The authors declare that they have no competing interests.