1Department of Botany and Ecological Studies University of Uyo, Nigeria

Effects of nutrient variation on the abundance and distribution of tree species in University of Uyo Arboretum was investigated. Systematic sampling method was used in sampling soil and vegetation parameters. A total of eight (8) soil samples were obtained at two soil derpths (0 – 15cm and 15 – 30 cm) from four plots. The result revealed that six (6) species from 5 families viz :Lamiaceae, Fabaceace, Urticaceae, Moraceae, and Rubiaceae. Nauclea diderrichii (12.66m) was the tallest species while Tectona grandis (6.12m) was the shortest species. Dominance index ranged from 0.654 to 0.347. Also, Shannon and Simpson diversity indices ranged from 1.079 to 0.529 and 0.653 to 0.345 respectively. Correlation analysis indicated that soil pH significantly (P>0.05) influenced species dominance while silt and available phosphorus significantly (P>0.05) influenced tree species diversity indices in the forest. These results further confirm the notions that pedological indices and nutrient status of soil play critical roles in plant species distribution and vegetation morphology in natural ecosystems. The information obtained in this research could be useful in management of indigenous forest ecosystems.

Forest is an important earth’s natural resource and a driver of several ecosystem processes including nutrient storage and recycling, air purification, wildlife habitat etc. Hence, Information on forest structure is an essential component for sustainable forest management planning. The value and importance of forest structure is very crucial especially when considering tropical rainforests which contain trees which can reach reasonable heights and diameters (Onyekwelu, Biber and Stimm 2003 [1]). Different researchers have shown that the forests together with the biotic and abiotic community it supports structures play many essential roles in the ecosystem functioning thus it is necessary to investigate the influence of different plant communities on soil and vice versa because it will provide the necessary ecological data which will be used to generate better conservation and resource management decisions. In previous studies, it is quite indicative that there is an inevitable relationship existing between plant species abundance and the physico-chemical and nutrient properties of soil in many areas (Adekunle 2004 [2]  ; Ubom, 2006 [3]  ; Anwana 2018 [4]). This is so because soil contains nutrients that are required by plants to grow (Verma and Verma, 2007 [5]). Investigation on abiotic factors of an ecosystem such as the arboretum is therefore important because it will elucidate the possible limiting factors in the soil controlling tree species diversity and abundance. Specifically, it is worthy to know which soil properties presently are consistent with the tree species diversity and dominance pattern found in University of Uyo Aboretum.

Concurrently, as efforts are being intensified globally towards preventing utter destruction of the patches of the remnant or regenerated tropical rainforest and ensuring the conservation of its rich biodiversity, the need for adequate quantitative and qualitative ecological data on tree species diversity becomes imperative as this is needed for molding out realistic and effective conservation strategies to be used within and between native forests or similar ecosystems. This form the pivot of this research.

This study is carried out within the vicinity of The Department of Forestry and Wildlife Conservation Aboretum which is situated within University of Uyo Town campus Annex (Latitude 5 0231 90 11 and Longitude 70 551 59 11). Uyo Local Government Area lies between longitudes 7º 55’ 21” E and latitudes 4º 52’ 35” N and is the capital of Akwa Ibom State which falls within the Niger-delta region of Nigeria. The major seasons in Uyo are the dry and wet seasons. Most specifically, the dry season spans mid-November to March whereas the wet season begins around April to October. The climate of the area favours luxuriant tropical rain forest which harbor large population of Fauna. The soil is fertile and so supports a wide range of subsistence and commercial agricultural practices (AKSG 2008 [6]) 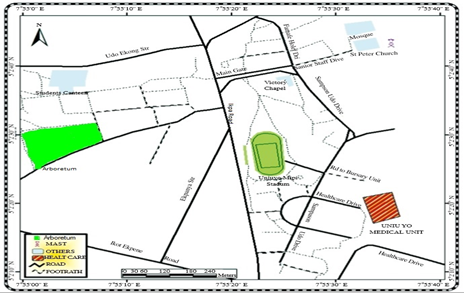 Mean and standard error were computed from three replicates of soil physico-chemical properties. Analysis of variance (ANOVA) and Fisher least significant different (LSD) test were employed to ascertain significant differences between the means of the physicochemical properties of the studied soils. The relationships between soil variables and vegetation variables within the study area were established by multivariate correlation technique using Statistical Package for Social Sciences (SPSS, Version 18.0). Species diversity indices such as Shannon-Wiener, Simpson, Dominance, were used to assess plant species population in the arboretum using Paleontological software (PAST 3).

3.1 Tree species composition of university of uyo, arboretum by families

3.2 Species dominance and diversity in the Aboretum

3.3 Soil-vegetation relationships in the Arboretum

Table 3 also indicates the influence of soil properties on the dominance and diversity of tree species by plots in the arboretum. It shows that Shannon-weinner index (0.921*) and Simpson index (0.943*) significantly and positively correlated with silt particles. Again, Shannon-weinner index (0.957*) correlated significantly and positively with soil Available phosphorus. Similarly, there is a significant positive correlation (0.653*) between species dominance  and pH.

The vegetation attributes of the arboretum showed variations and much heterogeneity in terms of species composition, floristic attributes and numeric distributions. These variations relate to the fact that plant species adapt differently to changes in topographic, anthropogenic and edaphic factors in their environment (Ubom 1992 [11]). (Santamaria 2002 [12]) authenticated that spatial distribution of safe sites (microsites) can often determine where seed establishment occurs, thereby strongly influencing plant colonization and successional patterns. Hence, efficient reproductive strategies and good dispersal capabilities are the two factors which could explain the gap in number of individuals of tree species found in the study area. Also another possible explanation for this could be selective exploitation of highly priced tree species such as Gmelina arborea which is largely used in paper making industries. Similar to this observation is the findings of (Christie and Armesto 2003 [13]).

The variations in height of tree species in the reserve indicate a true reflection of the different levels of biomass production, age of species and levels of trees exploitation in the area. The presence of high profile economic trees such Gmelina arborea, Tectona grandis and Musanga cecropioides is suggestive of the fact that the arboretum is a secondary forest which enjoys a reasonable level of human impact. This view is in synchrony with the earlier report of (Ubom, Ogbemudia and Ita 2012 [14]). The dominance of Gmelina arborea and Tectona grandis in the study area invariably point to the suitability of the soil conditions which favoured the high frequencies of establishment of these species. Also it portends their inherent ability to adapt persistently with high ecological tolerance. On the contrary, the low density values of tree species such as Treculia africana and Nauclea diderrichii signals their inability to adapt fully to the inherent factors such as soil nutrient status, intense exploitation, slow regeneration rates etc which may be precurssor to their growth and distribution patterns. This view is in consonance with the findings of (Wassie and Teketey 2006 [15]).

Shannon-Weinner and Simpson diversity indices recorded in this result is generally low when compared with other studies (Adekunle 2004 [2] , Adekunle et al. 2008). (Sharma and Joshi 2008 [16]) in a related study recorded a major decline in diversity status and vegetation composition and structure of forest due to human settlement, timber harvesting, agriculture and developmental activities. In line with this observation, the low diversity status could be linked with anthropogenic disturbances.

Correlation techniques are often used to examine the strength of the relationship between two variables that may be unevenly distributed over an area (Dalton 1972 [17]). The correlations between vegetation and soil variables were used to assess the nature of these relationships and to identify the key soil variables that strongly influenced the vegetation. The current result furnishes evidences showing significant soil-plant relationships in arboretum. Positive relationship between pH and dominance is well understood in keeping with the views of (Gould and Walker 1999 [18]) that pH determine to a large extent the accessibility of soil nutrients to plants. Positive correlation between silt and species diversity indices indicates that both parameters vary together. This pattern shows that the different tree species in the arboretum show preference for silty substrate and this could be due to high water retension ability associated with this particle size class (Mbong 2013 [19]). Also significant positive correlation between plot based Shannon diversity indexand available phosphorus is not unprecedented since phosphorus play vital roles in plant metabolic processes such as chlorophyll formation, fruit formation, healthy roots growth etc (Verma and Verma 2007 [5]).

An investigation on physical factors of an ecosystem is necessary to elucidate the possible limiting or enhancement factors controlling plant species abundance. It is important to know whether the soil properties or nutrient variation is consistent with the floristic variables in the ecosystems. This result concludes that soil forms part of the constellation of factors affecting vegetation physiognomy and vice versa and that it is necessary to assess the influence of soil properties on vegetation in controlled and natural ecosystems. The current research has shown that the flora of the arboretum is a blend of different economical and significant timber species such as Gmelina arborea, Musanga cecropiodes, Nauclea diderrichii, Tectona grandis etc. It reveals that the forest is low in species diversity and high in species dominance compared to other forest ecosystems. The result has also confirmed that there is a relationship existing between soil nutrient status and its floral components (diversity and dominance). From the results the most valuable soil factors affecting diversity and dominance are silt, pH and available phosphorus. The information obtained in this result is expected to serve as a baseline data for other ecological studies and conservation activities within and between native forests.