Ultrasound Diagnosis of Perinatal Lethal Hypophosphatasia, Confirmed with Targeted Next Generation Sequencing and Identification of a Novel Mutation in ALPL Gene

Perinatal lethal hypophosphatasia (p-HPP) is a lethal subtype of hypophosphatasia that prioritizes an early detection for appropriate treatment plan. Residual activity of alkaline phosphatase, owing to loss-of-function mutation of ALPL gene, accounts for degree of severity in phenotypes. We present a case of p-HPP in a Chinese couple’s fetus diagnosed at 18 weeks of gestation. Sonographic evaluation revealed a fetus with shortened and deformed limbs and hypoechogenic skull and vertebrae. After p-HPP was clinically diagnosed, the parents opted for medical termination of pregnancy. Further molecular investigation using next generation sequencing revealed the fetus to harbor a compound heterozygous mutation c935_943delTGGTGGTGG (pV313delVVV) and c406C>T (pR136C) in the ALPL gene. The mutation c935_943delTGGTGGTGG (pV313delVVV), of paternal origin, is to the best of our knowledge a novel mutation not reported before. This case demonstrates the importance of ultrasonography and molecular genetic testing in prenatal diagnosis.

Hypophosphatasia (HPP) is a rare inherited skeletal dysplasia due to loss of function mutation in ALPL gene [1], located at chromosome 1p36.1-p34. It has a low prevalence of 1 in 300,000 in Europe with more than 359 mutations reported to date [2, 3]. ALPL gene encodes for an enzyme, TNSALP (or bone ALP), which is essential for the proper mineralization of bones and teeth [4]. Consequently loss-of-function mutation in ALPL gene drastically decreases activity of ALP resulting in insufficient calcification of bones [5]. Residual activity of ALP, if any, and type of mutation in ALPL gene therefore produce phenotypes of varying degree of clinical severity ranging from asymptomatic to lethal, including bones that are soft and prone to fracture and deformity, premature tooth loss, in utero fetal skeletal malformation or stillborn [6]. HPP is classified into six subtypes: perinatal lethal, prenatal benign, infantile, childhood, adulthood, odontohypophosphatasia each with different age of presentation, symptoms and severity [7, 8]. The perinatal lethal form (p-HPP) is lethal owing to small cardiothoracic ratio and hypoplastic lung causing respiratory failure soon after birth.

With the fetus in longitudinal lie, spine facing up, ultrasonography showed most bony structures with areas of marked decrease in echogenicity. The cranium (Figure 1) and the vertebrae bodies (Figure 2) demonstrated no acoustic shadowing suggestive of bone demineralization. The cranium was compressible under pressure applied on abdomen by transducer. The spinal had normal curvature. No organs defects (heart, bladder, kidney, large vessels) were detected. Amniotic fluid was adequate. Umbilical cord insertions and placenta were structurally normal with normal blood flow on color Doppler. 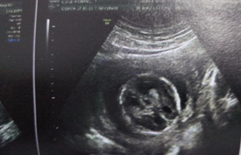 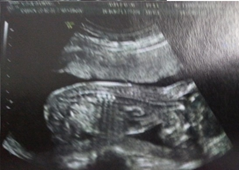 Figure 2: Fetus in longitudinal line with spine facing up and vertebrae showing no acoustic shadowing.

After the non-consanguineous Chinese parents (mother 21 years, father 26 years) were informed that the fetus was diagnosed as p-HPP and its lethal outcome, they opted to terminate the pregnancy. She revealed similar findings for her last pregnancy which was also terminated. The current pregnancy was medically terminated and she gave birth to a 220 g stillborn male fetus with mesomelic upper arms and upper legs with marked bowing of bilateral lower limbs. Counseled about the reoccurrence risk in successive pregnancy, the parents consented to our recommendation of proceeding with Targeted Next Generation Sequencing (tNGS) for HPP, for both parents and stillborn fetus. DNA was extracted from peripheral blood (parents) and amniocytes (fetus) using a DNA extraction kit (Tiangen, China) according to the manufacturer instructions. An array of gene for HPP (ALPL) and its differential diagnosis: osteogenesis imperfecta (COL1A1, COL1A2) and Campomelic (SOX9) was used. tNGS identified heterozygous mutations c935_943delTGGTGGTGG (pV313delVVV) and c406C>T (pR136C) in the ALPL gene of father and mother DNA respectively. The fetus was compound heterozygous for both. The results were confirmed with Sanger sequencing methodology. The mutation c935_943delTGGTGGTGG (pV313delVVV), of paternal origin, is, to the best of our knowledge, a novel mutation not reported before.

p-HPP is an autosomal recessive subtype of HPP with occurrence of 1 in 100000 births and a mortality rate of 100% [8, 9] owing to respiratory compromise. It is characterized by markedly impaired bone mineralization in utero owing to loss of function mutation in ALPL gene. Reduced or absence of ALP activity produces a profound hypomineralization of axial and/or appendicular skeleton, frequently leading to shortened and deformed limbs and invariably fatal thoracic instability (rachitic deformities) leading to respiratory insufficiency due to pulmonary hypoplasia with final outcome either stillbirth or death within few days of birth.

In general, the clinical diagnosis of HPP is based on family history, radiological findings, bone mineral density measurements and biochemical assays. The biochemical hallmark of HPP is a low serum ALP activity with a concomitant increase in levels of ALP substrates including inorganic pyrophosphate (PPi), pyridoxal 5’-phosphate (PLP) and phosphoethanolamine (PEA). However the diagnosis of pHPP is more challenging. After delivery it can be suspected if some features including shortened and deformed limbs, caput membraneceum due to hypomineralization, skin-covered osteochondral spurs protruding from the forearms or legs, a small thoracic cavity, periodic apnea with cyanosis and tachycardia and high pitched cry among others are encountered. In case of stillborn, radiologic imaging and autopsy and pathology are diagnostic. In utero, ultrasonic evidence, as early as 14-16 weeks, of normal trunk length, micromelia and small cardiothoracic ratio are pathognomonic of pHPP. Although ultrasonography can detect skeletal dysplasia with an accuracy of 95% [10] in two dimensional or three dimensional visualization, in utero it is hard to distinguish among the differential diagnosis of HPP, namely campomelic dysplasia (CD) and osteogenesis imperfect(OI) [11], and gracefully molecular identification of the causative gene mutation from an array of gene for differential diagnosis; HPP (ALPL), OI (COL1A1, COL1A2) and CD (SOX9) provide definitive diagnosis. The results are confirmed by Sanger Sequencing methodology.

The ALPL gene (MIM 171760) is located on chromosome 1p36-34 and consists of 12 exons distributed over 50kb. It encodes for the enzyme TNSALP (or bone ALP), which is usually found at the outer surface of osteoblasts and chondrocytes. This enzyme is essential in osteoblastic bone matrix mineralization where its main function is to hydrolyze inorganic PPI and PLP for the proper mineralization of bones and teeth [4]. Mutation of ALPL gene therefore drastically decrease activity of ALP leading to an extracellular accumulation of PPi which inhibits hydroxyapatite crystal formation and is therefore responsible for the defective mineralization and bone ossification seen in pHPP [5]. Missense (72%) and small deletion (10.9%) have been the most reported type of ALPL gene mutation [12]. These mutations alter the nucleotides sequence in ALPL gene causing abnormal protein building block that result in the production of defective or nonfunctioning version of TNSALP enzymes. A decrease in ALP activity leads to an increase in its substrates PLP in the blood which correlates with disease severity. In this reported family, molecular analysis identified the mutation c406C>T (pR136C), of maternal origin, corresponding to amino Arginine substituting Cysteine at location 136 which is a reported mutation. The mutation c935_943delTGGTGGTGG (pV313delVVV), of paternal origin, is a novel mutation been reported. The fetus harbored both mutations in ALPL gene, confirming a definitive diagnosis of p-HPP.

An early detection and diagnosis is key to a proper treatment plan. Though p-HPP is lethal in most cases, from 2015 onwards treatment trials with asfotase alfa and vitamin B6 on infants and young children with life-threatening HPP have produced promising results associated with improved findings on skeletal radiographs and improved pulmonary and physical function [13, 14]. Therefore any abnormal skull or limbs detected by ultrasound must be considered seriously and where possible molecular analysis of suspected condition should be confirmed or ruled out. This guarantees parent-to-be a more realistic outcome of the current pregnancy with possible treatment strategies where possible. If there is no possible treatment, they have the choice to wait for a deformed baby or terminate the pregnancy. Thus the prenatal assessment of the recurrence risk of HPP by mutational analysis of DNA derived from the direct processing of chorion frondosum sampling in one’s pregnancy can predict the outcome of the pregnancy very early in first trimester.

In conclusion, the absence of skull ossification and limb shortening on ultrasound scan, after 14-16 weeks, should raise suspicion of pHPP and must be confirmed, where possible, by molecular analysis. Early diagnosis will predict outcome of pregnancy thereby decreasing future rate of fetal mortality and maternal morbidity. Here we reported a novel mutation in the ALPL gene responsible for p-HPP and also highlights the importance of integrating molecular investigations, coupled with clinical and imaging findings, as a fundamental prenatal diagnostic tool.

The authors have no conflict of interest.