A seventeen-year-old boy was admitted and referred for MR evaluation of acute abdominal and pelvic irritation and discomfort, dysuria and severe pain during ejaculation, the latter symptoms coincident with puberty and the onset of sexual activity. Prior ultrasound had revealed findings consistent with a hypoplastic, hydronephrotic, ectopic left kidney and compensatory hypertrophy of the right kidney. The improved tissue resolution and more precise anatomical delineation of the genitourinary tract afforded by MRI revealed the typical triad of Zinner’s syndrome-unilateral renal agenesis, ipsilateral seminal vesical cysts and obstruction of the ejaculatory duct. MRI not only facilitated the final correct diagnosis, but also supported surgical planning and successful treatment-laparoscopic resection of the left seminal vesicle, which led to complete cure, symptomatic relief and restoration of fertility. Knowledge and understanding of the anatomy and embryology of the genitourinary tract is necessary for obtaining the accurate diagnosis by using appropriate imaging modalities.

Zinner syndrome is a rare condition, characterized by the triad of unilateral renal agenesis, ipsilateral seminal vesical cysts and obstruction of the ejaculatory duct, and resulting from developmental arrest during the early stages of embryogenesis involving the Müllerian duct. First reported more than one hundred years ago [1], approximately 100 cases of this condition have been described in the literature since 1980 [2].

A 17-year-old boy with a long-term history of dysuria, increased micturition frequency, constipation, pelvic pain and discomfort presented to our department for further MRI evaluation. Over the past 3 years, since the onset of puberty, the subject had experienced progressive clinical worsening of their lower urinary tract symptoms (pain and irritation), with aggravation of perineal pain and pain on ejaculation. Symptom intensity was reported to increase during and after ejaculation and recently the boy had complained of tumefaction of the left scrotal area, which had been interpreted as epididymitis. Antibiotic treatment had been prescribed for simultaneous treatment of suspected prostatitis. During hospitalization, ultrasound (US) examination reconfirmed the solitary right kidney with compensatory hypertrophy and the cystic mass in the left periprostatic area, interpreted as a hydronephrotic hypoplastic ectopic left kidney without any other accompanying anomalies (Figure 1). The subject had undergone surgery for bilateral hydrocele at the age of 4 years. Physical examination confirmed normally developed external genitalia. There is no family history of renal anomalies, and the boy has a healthy sister. Informed consent was received from the family.

Magnetic resonance (MR) findings were confirmatory for agenesis of the left kidney and compensatory hypertrophy of the right kidney with paired right renal arteries, and revealed the presence of an ipsilateral multicystic, tubular structure at the level of the left seminal vesicle and the left ejaculatory duct at the dorsolateral wall of the bladder. This finding, mimicking the hydronephrotic hypoplastic kidney observed on US, appeared with iso- to hyperintensity in T2 sequences and hyperintensity in T1 sequences (the increased T1 intensity is thought to reflect hemorrhage or an increased concentration of proteinaceous fluid; Figure 2). A small amount of free pelvic fluid was observed in proximity. Appearance of the remaining organs and structures in the abdomen and pelvis on MRI was normal. Surgical resection of the left seminal vesicle was performed not only to reduce the painful symptoms but also to reduce the risk of recurrent infections and loss of the left testis. Cystoscopy revealed a normal urethra, vesicle neck, and bladder, with right ureteric orifice in the normal position and absent left ureteric orifice. On laparoscopy, the left retrovesical space was found to be occupied by a voluminous cystic left seminal vesicle with extension into the large vas deferens canal. A tortuous inflamed left ureter was identified adjacent to the left seminal vesicle with massive adhesions towards the latter and the surrounding structures. Following dissection of this ureter in the cranial projection, a very small, dysplastic kidney was discovered a few centimeters under the aortic bifurcation with renal pedicle arising directly from the aorta and the inferior vena cava. This miniature kidney was resected totally with complete ablation of the hypoplastic ureter and the enlarged left seminal vesicle. The postoperative course was uneventful. On post-operative US and MRI only a small pelvic effusion was noted (Figure 3), with complete resorption at US follow-ups. 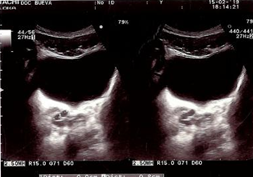 Figure 1: Ultrasound demonstrates a cystic mass in the left periprostatic area, at the level of the left seminal vesicle.

Figure 2: (a) At the dorsolateral wall of the bladder, a cystic, tubular structure is visible at the level of the left seminal vesicle and the left ejaculatory duct. The lesion is hyperintense in T1; (b) and iso- to hyperintense in T2 sequences; (c) (the increased T1 intensity is thought to reflect hemorrhage or an increased concentration of proteinaceous fluid content). The left kidney could not be visualized from the left kidney fossa to the level of the pelvis. There is compensatory hypertrophy of the right kidney with paired right renal arteries and lack of hydronephrosis or hydroureter.

Figure 3: Postoperative MRI. (a) Sagittal; (b) axial; (c) coronal images after resection of the left seminal vesicle. Note the presence of a small fluid effusion in the pelvis.

If asymptomatic, patients with Zinner syndrome are usually diagnosed in the second or third decade of life often during the evaluation of infertility. The diagnosis may be established earlier in adolescents presenting with clinically suggestive symptoms and surgery may be required, as in the case presented here. Based on the clinical symptoms, MRI imaging was helpful to establish the correct diagnosis and to facilitate surgical planning for the affected seminal vesicle by precise anatomical localization of the different pelvic organs and structures. Typical symptoms reported by other authors such as dysuria, frequent micturition, perineal pain and signs of epididymitis were observed in our patient [3]. These symptoms are related to atresia of the ejaculatory duct with obstruction and cystic dilatation of the seminal vesicle, often in association with other urogenital anomalies, such as unilateral renal agenesis [4]. Ejaculatory duct atresia can also be due to a developmental anomaly of the distal part of the Wolffian ducts. The association between renal agenesis and ipsilateral seminal vesicle cyst is based on the embryological connection between the genital and urinary tracts [5]. This close embryological relationship explains the developmental abnormalities that give rise to this anomaly. The Wolffian (mesonephric) duct, which leads to the formation of the male reproductive system and the ureteric bud, is a paired structure [6]. An aberration occurring prior to the 7th gestational week provokes maldevelopment of the distal part of the Wolffian duct, leading to atresia of both the ejaculatory duct and the ureteric bud [7]. Between the 4th and 13th gestational weeks the embryological deviations cause abnormal development of the ureteric bud and Wolffian duct-derived structures such as the seminal vesicles and ejaculatory duct [8]. According to some authors this anomaly is considered to be the male equivalent of Mayer-Rokitansky-Küster-Hauser syndrome in females [9].

Apart from the complaints resulting from pressure from the seminal vesicle cyst, such as dysuria, perineal pain, frequent micturition, and painful ejaculation, all present in our patient, there could be later development of oligo- and even azoospermia, leading to infertility [10].

Modern cross-sectional imaging modalities are essential for the accurate diagnosis of this rare condition. Ultrasound is a fast, widely available and used method for initial examination and can visualize anechoic masses at the level of the seminal vesicles. However, US is a relatively operator-dependent method, and cannot provide an extensive anatomical overview of the pelvis. Internal low-level echoes can be seen on ultrasound when hemorrhage or infection are present [11]. Computed tomography (CT) should be avoided due to radiation exposure. Currently, MRI is the modality of choice for urogenital pelvic evaluation due to the opportunity for multiplanar imaging, lack of radiation and improved tissue resolution versus US and CT. It enables visualization of the seminal vesicles and differentiation of other cystic pelvic masses [12]. MRI is also the main imaging method of choice concerning the prostate and seminal vesicles, confirming the origin of the cystic periprostatic structures [13]. The typical signal intensity varies dependent on the protein and hemorrhagic content of the mass [14]. The main mimickers in the differential diagnosis of seminal vesicle cysts are cystic diseases of the pelvic organs, such as prostatic gland true cysts, ureteroceles, Müllerian duct cysts, and Gartner’s duct cysts [15]. Another advantage over US examination is the possibility to demonstrate on some occasions a connection between an ectopic ureter and the seminal vesicle [12]. The appropriate use of the best imaging technology in such cases could bring new insights and understanding of this rare disorder.

Surgery is required in all symptomatic patients. Symptomatic or larger than 5 mm cysts are candidates for laparoscopic resection, which has the benefits of providing a direct approach with good visualization and magnification in addition to being less invasive [16].

Appropriate imaging modalities are essential in the evaluation of complex development anomalies of the urogenital tract. The presented abnormality of the Müllerian duct is rare, severely symptomatic, with potential negative consequences such as infertility, which would have remained undiagnosed without MRI imaging. MR is the preferred method of choice due to the possibility of multiplanar imaging and superior soft-tissue resolution of the male genital tract anatomy. We assume that using an appropriate imaging as MRI could have an impact for the better evaluation and management of such cases. Robotized laparoscopic surgical resection when possible is mandatory in symptomatic patients instead of open surgical approach.

Disclosure of Potential Conflicts of Interest

No potential conflicts of interest are disclosed.